A chambered cairn in Scotsburn Wood. 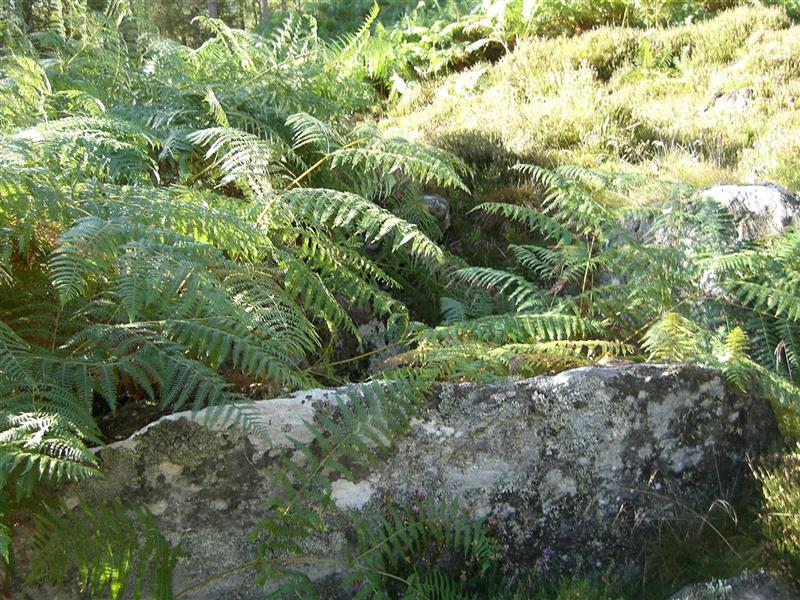 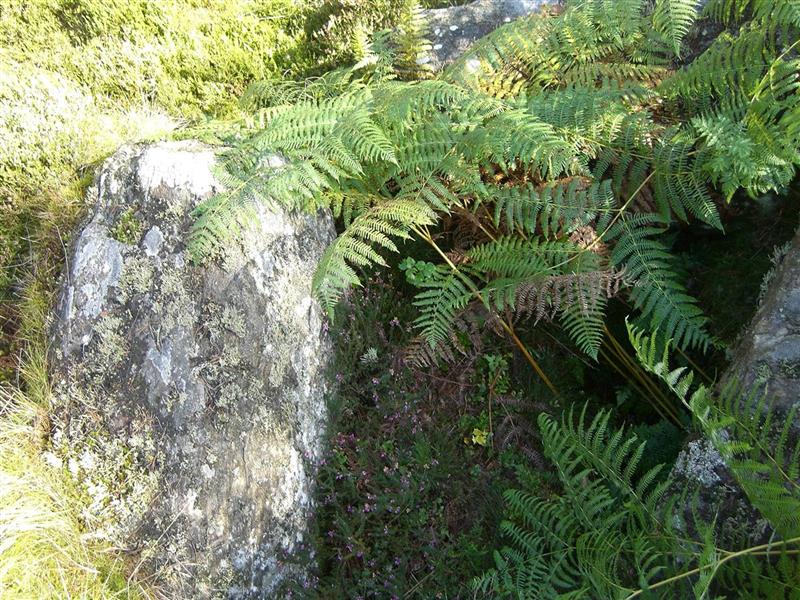 One of a number of cairns in Scotsburn Wood. Originally recorded as Cairn E.

". . . traditionally said to indicate an ancient battle between some Scottish forces and the Danes." <1>

Carn nam Marbh (Dead Men's Cairn): This cairn and those in Scotsburn Wood are almost certain to mark the site of a battle. Neighbouring names are: "Lochan a' Chlaidheimh" - Sword Lochlet, and Bearnas a' Chalaidheimh" - Sword Cleft. <2>

In the area centred NH 7261 7667 on the S-facing slopes of Beinn an Lochain are, or have been, six cairns in the positions given. All are in an area that has been fairly recently reafforested.
Cairn A is a heather-covered mound 11m diameter with a maximum height of 2m on W. It has been ploughed and planted with young firs but this has at least served to show the stony content of the mound.
There are no remains of cairn B.
Cairn C is 13m N-S and has a fairly level top now of bare stone. The perimeter is covered (heather) except on S side where cairn is now skirted by a forestry road. The greatest height of cairn is 1m.
Cairn D is 14m diameter and has a max height of 1.2m It consists of bare stone and just W of its centre a large slab stands on edge which together with a few other large stones nearby may form or have formed part of a chamber or cist. Any such feature is at present, however, obscured by abundance of smaller rubble.
Cairn E has been much mutilated by ploughing and trees planting. It appears to have been 16m diameter and is now generally level with ground. In centre of cairn, four large slabs, one of which has fallen, form NW end of a chamber 5.5m long and 3m wide, aligned NW-SE. The largest of these stones is set across the chamber, dividing it into two compartments. A passage 0.8m wide and 2m long can be discerned at SE end marked by four stones, two set on each side.
There are no remains of cairn F.
Visited by OS (R D L) 17 May 1963.

Cairn "E" (NH 7218 7679) is in the Forestry plantation a little under 600' above sea level. The cairn material had been almost completely removed before the remains were ploughed through and planted. The diameter seems to have been c.60'. Most of the large stones which formed the chamber walls survive. The entrance was from ESE. A pair of split slabs c.10' within the apparent edge of the cairn form the entrance to a short passage 4'6" long which is divided from the chamber by a pair of transverse stones set 2'4" apart. The chamber was c.15' long, divided into two compartments by a pair of low massive stones. The lintel which had rested on these stones has fallen to W. One stone remains on S side of outer compartment. The inner compartment, 6'6" wide, is defined by three stones, the back-slab having recently fallen forward. <3>

"E" has probably measured c15m in diameter, but most the cairn has been removed, leaving exposed the orthostats of an Orkney-Cromarty chamber entered from SE. Projecting NW from each end of the back slab are two more slabs on edge which appear to be the remains of a secondary chamber.
Re-surveyed at 1:2500. Visited by OS (JS) and (AA) 14 3 1973.

NGR amended 2017 to position as depicted on OS MasterMap. <5>