A small cave in the Geodha Smoo, Durness, some 80m to the northwest of the main Smoo Cave. Midden deposits were identified here in 1992 and investigated in 1995. 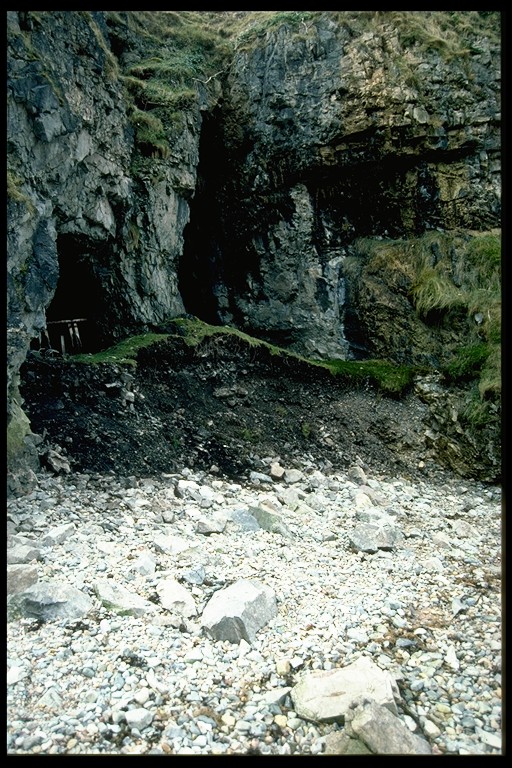 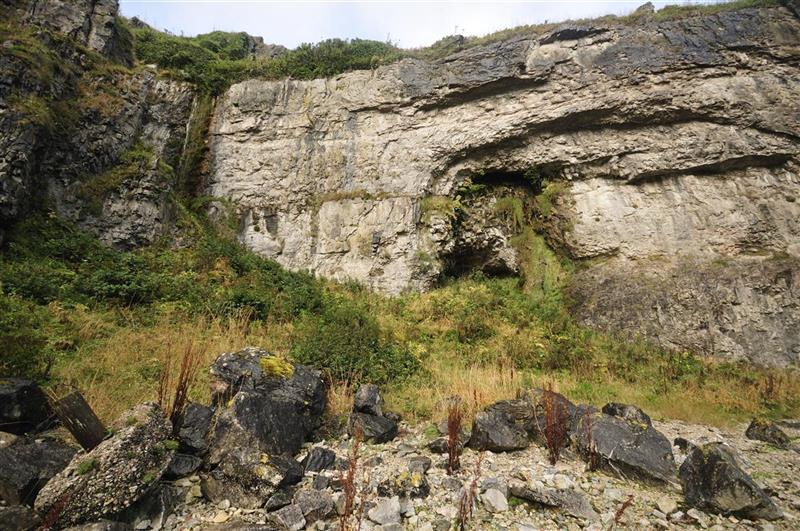 During excavations in 1992 by GUARD to record eroding midden deposits in Smoo Cave (see MHG11597) the opportunity was taken to investigate its wider environs. This brought to light the presence of a further shell midden some 50m to the northwest of the main cave entrance. Like the deposits in the main cave this site had undergone serious erosion, this time marine in nature. The deposits were noted as being of considerable extent, with the eroding section some 9m long and around 2.5m deep. It revealed several deposits rich in marine shells and butchered animal bone. Following the completion of the assessment a quern stone was found eroding from the section. It was recommended that the site be investigated before it was totally lost to the sea. <1>

During spring 1995 GUARD were commissioned by Historic Scotland to carry out rescue excavation of the coastal midden deposits identified in 1992 to the northwest of Smoo Cave. The deposits were located across the mouths of two small adjoining caves which were situated in the western wall of the narrow, canyon-like inlet through which Alt Smoo flows. The caves were named by excavators as a means of preventing confusion with the larger cavern - Glassknapper's so-called because of finds of bottle glass which at first sight looked as though they had been knapped (they had not) and Antler Cave after unmodified red deer antler was found in the deposits. When the section was cleaned back it became apparent that there was a difference between the deposits of the two caves. The southern cave (Grassknapper's Cave) appeared to contain a far more complex series of deposits. The deposits in the northern cave (Antler Cave) were less well defined and varied.

Excavation of the Antler Cave was limited to a small trench cut back from the main section for little over a metre. It did not prove as productive as its near neighbour although it was acknowledged that the wet conditions always present regularly caused the sections to collapse and thus made it impossible to excavate as extensively. A series of deposits related to past human activity were identified though these were partially contained within rubble horizons rather than in highly compacted lenses and layers. It appeared that the cave had been used on a much more casual basis than its neighbour with features such as firespots andf artefacts being largely absent. No artefacts were identified during the excavation. However, a number of intact antler tines were recovered from the lower deposits, with a possible suggestion being that this cave was used for the storage of this raw material. <2>

The full published report for the 1995 excavations presents detailed analysis of the environmental samples recovered from the cave deposits. In comparison to its neighbour only a limited amount of material was excavated from this cave. Fish remains included mainly first and second year saithe and pollock, a few elements from a medium-sized to large cod, a single element from a large cod, mature herring, ballan wrasse and sand eel. The greater part of the mammal assemblage came from Glassknapper's Cave and they were in a better state of preservation. Those from Antler Cave were covered with limy deposits, in some cases obscuring diagnostic features which would aid identification. Tne species represented included cattle, red deer, sheep/goat and field vole. No bird remains were identified in the samples from Antler Cave. There was evidence from both of the caves that antlers were being processed into artefacts. A single layer produced large amounts of mainly common limpet, which was possibly used as fishing bait, with some edible periwinkle. Crushed shells from edible mussel were also present. <3>