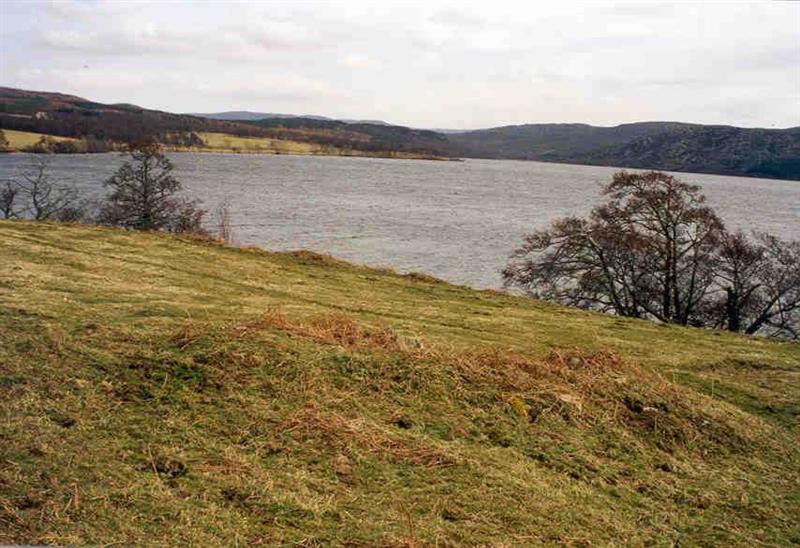 West Town: A Ring-cairn situated in pasture sloping gently down to the loch, but in a region of hummocky moorland, has been greatly ruined, and also used as a dump for field stones. The shape is now irregular and the original edge cannot be traced though a few sizable stones lie about. The cairn appears to be about 6 ft. high, but as it seems to be built on an outcrop it is probably actually less. It has an interior setting of five slabs set in a circle with a diameter of 28 ft. 6 ins.
A S Henshall 1963; A A Woodham 1958.

The remains of this cairn are at NH 6217 3258. The most northerly stone of the inner ring could not be seen but the others remain in position. The stone on the east is the largest, 1.0m long, 0.7m. high and 0.25m. thick. Identification of the stones of a possible outer circle is hindered by the presence of stone clearance piled on the mound.
Overall the cairn appears to measure 26.0m NN to SE and 18.0m NE to SW but it possibly had a diameter of only 18.0m.
Surveyed at 1/2500.
Visited by OS (R D L) 28 August 1963

NH 622 327 This site was examined during July 1964 and found to be a Clave ring-cairn of the Gask type. Thirteen flat slabs on edge forming part of a circular well were found. Only one stone found could have formed part of an outer kerb and its position suggested an origianl thickness for the ring of approx. 9 ft. A central hearth and traces of iron-working were also found.
A A Woodham 1964.

The much disturbed remains of this Clava ring-cairn are situated on the top of a knoll in improved pasture. It measures about 20m in diameter overall by up to 1.5m in height, but the cairn has had a large quantity of field gathered stones added to it, masking its original appearance. Excavation in 1964 (Woodham, 1964) showed that the central court measured about 8.5m in diameter within a ring-bank 2.7m thick. Four stones of the revetment of the court are still upright, while a fifth lies prostrate. A curving slit-trench, linking the stones of the court kerb, mark the site of the 1964 excavation.
Visited by RCAHMS (PJD) 7 October 1992.