A chambered long cairn, partly truncated by ploughing at the north corner. 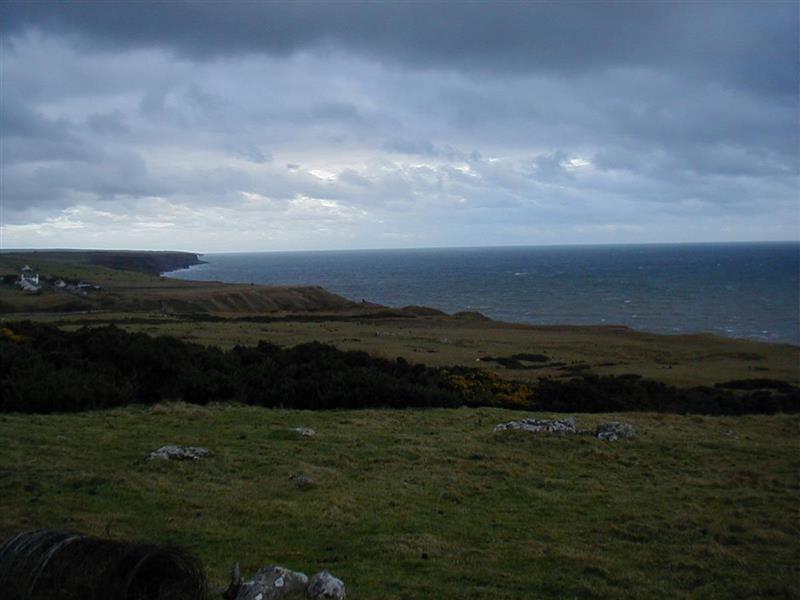 A possible long cairn aligned NE-SW and measuring 57.5 by 16.5 by 1m in maximum height. Generally trapezoidal in shape with the wider part being stone-strewn ridge with upright stones protruding. At N end is raised central area with slabs radiating and possible entrance to NW. A series of large depressions here and throughout length could represent chambers. Traces of possible lintel slabs in association with passage-ways. S end of complex is dominated by a series of shallow depressions and upright slabs. <1><2>

A turf-covered and disturbed long cairn measuring 61m in length along its main axis, which is aligned NE-SW. Through half its length from the SW end, the cairn measures 12m across and 0.7m high; it then expands in NE half to a maximum of 20m across and up to 1.1m high. In the latter half there are three or four individual upright slabs but only one, the biggest, appears significant; it may be back slab of a chamber. Cairn generally shows a profusion of surface and protruding slabs. Surveyed at 1:2500.
Visited by OS (J M) 15 October 1982.

The cairn is in grazing, formerly cultivated, on a terrace at 30m OD, 150m from the sea. There is a gentle slope down from NW to SE. The Latheronwheel round cairn (ND13SE 7) is on a higher terrace 320m to the WNW. Cairn has been greatly robbed and mutilated and secondary structures have been built into it. The cairn is turf-covered with many protruding upright slabs, loose slabs, and depressions into its surface. However, the edges are distinct and reflect shape and size of the original cairn. It is 60.5m long with axis NE-SW. For nearly two-thirds of its length from SW it is almost parallel-sided varying from 11 to 13.5m wide. About 35m from SW end the cairn expands, the plan on the SE side being clear but on the NW side having been affected by ploughing. The maximum width is about 22.5m, but may have been as much as 27.5m originally. The NE end is irregular in ground plan, but at a slightly higher level appears almost straight with the suggestion of a horn at the E corner. It is clear that the N corner has been curtailed by ploughing. The SW end is straight with rounded corners. The height of the SW part of the cairn is generally 0.7m, and the maximum height near the NE end is 1.4m. The vertical slabs in the cairn do not suggest and coherent pattern. One particularly large slab may be noted as possibly part of the original structure. It lies almost transversely to, and just NW of, the axis some 20m from the NE end: possibly the slab was set across the original axis the precise position of which is uncertain as the original width of the NE end is not known. The slab is 1.45m long, 0.3m thick, and projects 0.7m. If this slab is part of a chamber it lies too far to the SW for the chamber to be central in the expanded NE end of the cairn. Almost parallel with the large slab and 1.9m to the SW is a much smaller slab which possibly is associated with it. Visited 5 September 1986. <3>

Lies on lower terrace above coast, see photo from upper. <4>