The final and full publication of all the work carried out at the site is now expected to be in early 2023.

The High Pasture Cave & Environs Project was initiated in 2003, after disturbed archaeological deposits relating to the use of the site during the Late Bronze Age and Iron Age periods were found in a high-level fossil passage of the cave. Funding from a number of agencies and offers of work in-kind from university departments and freelance specialists has permitted archaeological survey and evaluation work to continue at the site, which is located in the south of the island of Skye, in the Parish of Strath. Fieldwork completed to date includes geophysical survey and excavation, while post-excavation analysis is looking at a wide range of materials and artefacts recovered from the site. Survey work on the surface above the cave passage has revealed a range of stone-built structures of prehistoric and historic age. Evaluation of the wider landscape has revealed other archaeological features relating to prehistoric and historic settlement in this part of Skye, indicating the use of the land over a significant period of time.

Local archaeologists Steven Birch and Martin Wildgoose are co-directing the project work, which has also been assisted by volunteers from the local community and archaeology students from Mainland and overseas universities. From our preliminary investigations at High Pastures it would seem that the function of the site has changed through time and while it is possible that the cave may have been used as a natural feature in which to deposit domestic rubbish, it is also becoming increasingly obvious that people entered this dark and strange world for other reasons. Work at the site over the past two years has revealed a stone-built passage descending, via a steep flight of steps, from the surface to the natural limestone cave below. In 2005, the remains of three humans were found in the blocked stairwell, burials dating to the Iron Age around 2000 years ago, while a wide range of artefacts of stone, bone and antler were recovered from other areas of excavation at the site. Residues relating to metalworking have also been found, while a large assemblage of well preserved animal and fish bone provides evidence of the types of food that were being consumed at High Pastures during the prehistoric period.

Analysis of the animal bone suggests that unusual butchery practices were performed on some of the animals, especially on cattle and pig, indicating that feasting may have been taking place at the site on some occasions. These factors, combined with some of the deposits of fine quality artefacts, evidence for metalworking and the deposition of human remains in the blocked entrance to the cave, illustrate the importance of the site in the wider Iron Age landscape of Skye and its possible use in a ritual function. The entrance to the cave may have provided access to the ‘Underworld’ or ‘Otherworld’, a liminal place in the landscape where people from the surrounding settlements held special feasts, made offerings to Celtic deities and undertook the manufacture of metals. What we may be witnessing at the High Pasture Cave site are elements of domestic life deployed in a specialised context, providing them with new emphasis.

Note from the Highland HER

This information has been taken from the project website: http://www.high-pasture-cave.org/ where huge amounts more can be discovered about the site and the project. Sadly, the final season of fieldwork ended in September 2010.

A charred wooden object found during the last fieldwork season is believed to be the bridge from a lyre. The notches where strings would have been placed are easy to distinguish. 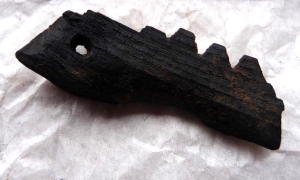 The find was recovered from the rake-out deposits from a large slab-built hearth outside the cave entrance. The object has been dated to around 2,300 years ago, making this the earliest known example of a stringed musical instrument ever found in Western Europe.

Work to assimilate the vast amount of information generated by this project into the HER is really only just beginning. Information about the fieldwork, with reports, can be viewed from the links below. Eventually all the information in these reports will make its way into the site records and be fully searchable. All the reports are now available below but work continues on updating all associated records. Check back for updates!

2003: Topographic survey in the area around the High Pasture Cave site