A possible hut circle at Ledmore. An alternative interpretation is that it is the remains of a sheepfold. 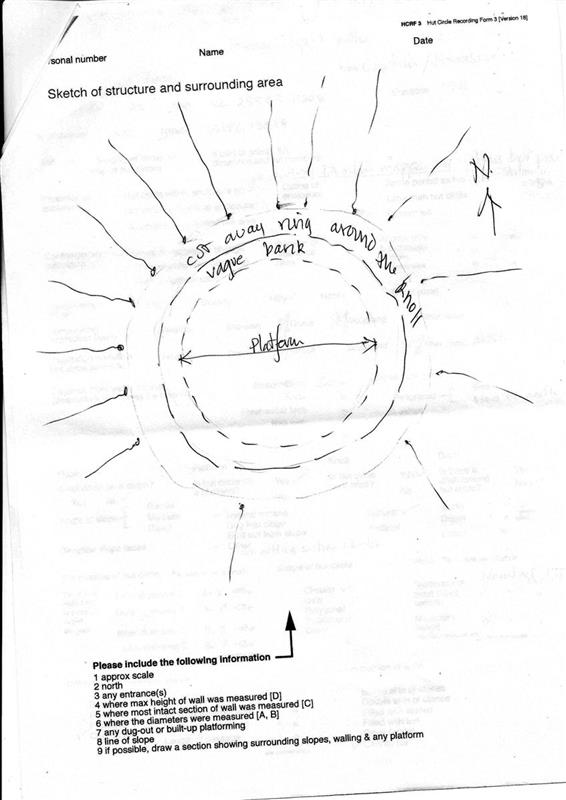 A possible hut circle at Ledmore. An alternative interpretation is that it is the remains of a sheepfold.

NC 235 118: On the E side of a flat-topped hill is a turf-covered stony platform 8.0m in diameter and 0.3m high. Classification uncertain - possibly a denuded cairn, a mutilated hut-circle, or even a shieling.
Visited by OS (JM) 9 July 1974

The site was visited and recorded by the University of Edinburgh in 1976 during a survey of the estates of Ledmore and Loubcroy. Enclosure: circular. Ruined sheep-pen at NC 239 118. <1>

An early modern turf-built sheepfold and enclosures, banks associated with early modern land use.
Revised at 1:10,000.
Visited by OS (N K B) 2 September 1980.

223843 911808 Ledmore Forest GS082: The hut circle was visited by A Welti and G Sleight in 2017 as part of research for a dissertation on hut circles in Wester Ross. This was part of a degree course overseen by Aberdeen University. This structure is circular with no stone evident. It has been totally robbed out. It lies on a natural knoll. The sketches show that the top of the knoll appears to have been dug round and the material piled inside the cut to partially level it and create a circular bank. Most of this bank seems to have been eroded away. The structure is within an enclosure which is on 18th Century farm land mapped by Holmes in 1774, but probably earlier in origin. There are two small kerbed cairns (probably Bronze Age) within the same enclosure. These were probably visible from the site before the advent of the conifer plantation. The surrounding landscape vegetation is mostly woodland from a forestry scheme which has destroyed a probable small farmstead near to GS082. Possibly stones from GS082 were utilised in the original building of the farmstead and that the cutaway ring may have been once the foundation of a circular stone wall. Vegetation on the structure is a mixture of grass rushes and moss. The site is 50m from a stream, Na Luirgean, and 800m from freshwater Cam Loch. From the site there are panoramic views inland to the north. Average inner diameter of the platform inside the bank is 11.2m, and outer diameter is 14.0m. No other measurements were possible. The site was previously reported as a stell but it may originally have been a roundhouse, possibly associated with the two cairns. <2> <3>