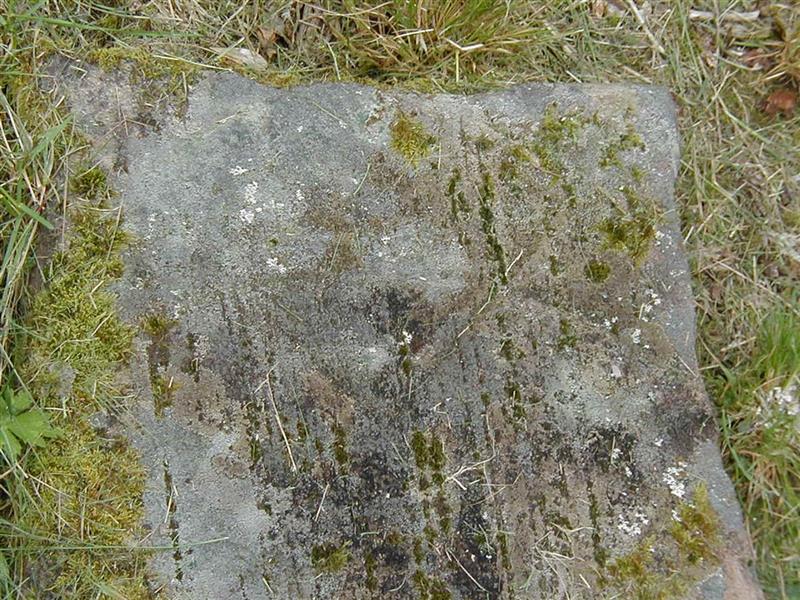 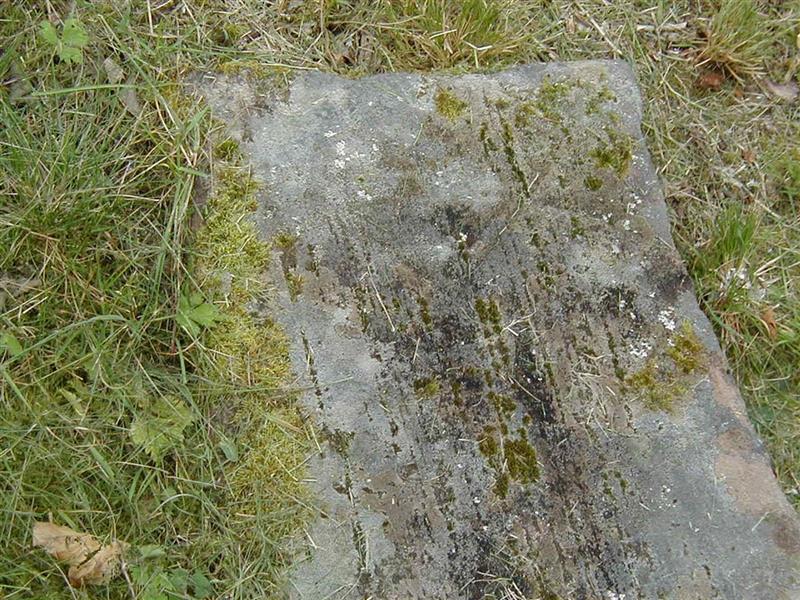 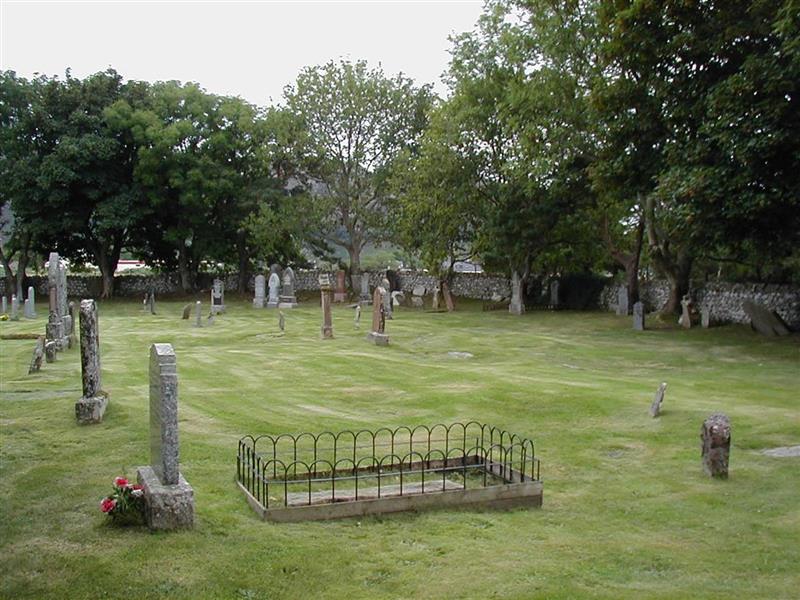 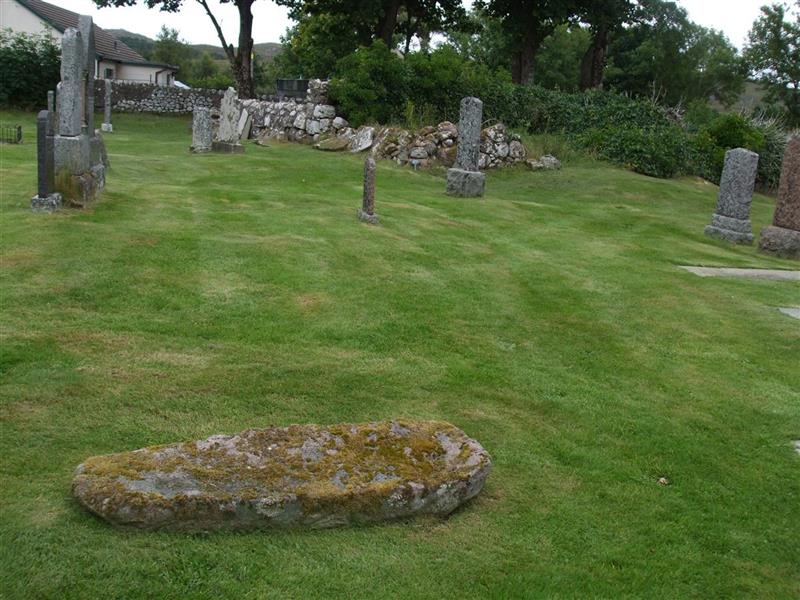 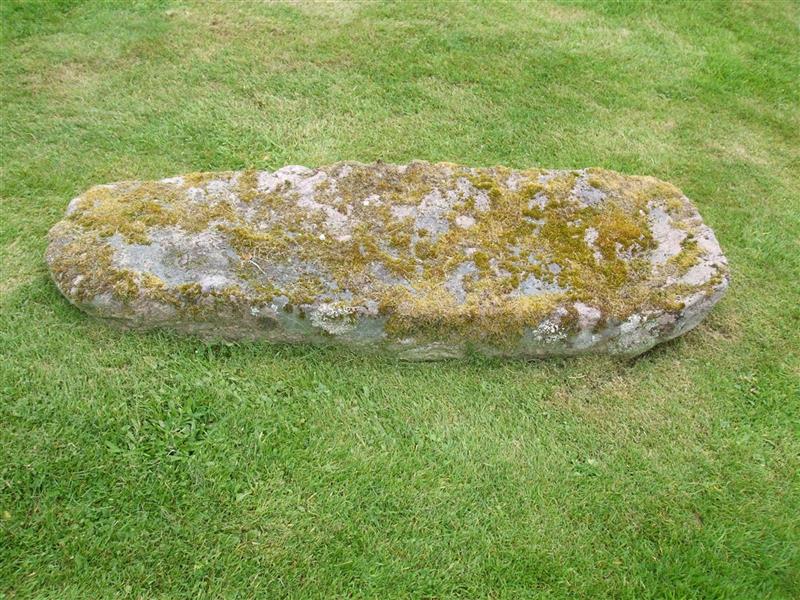 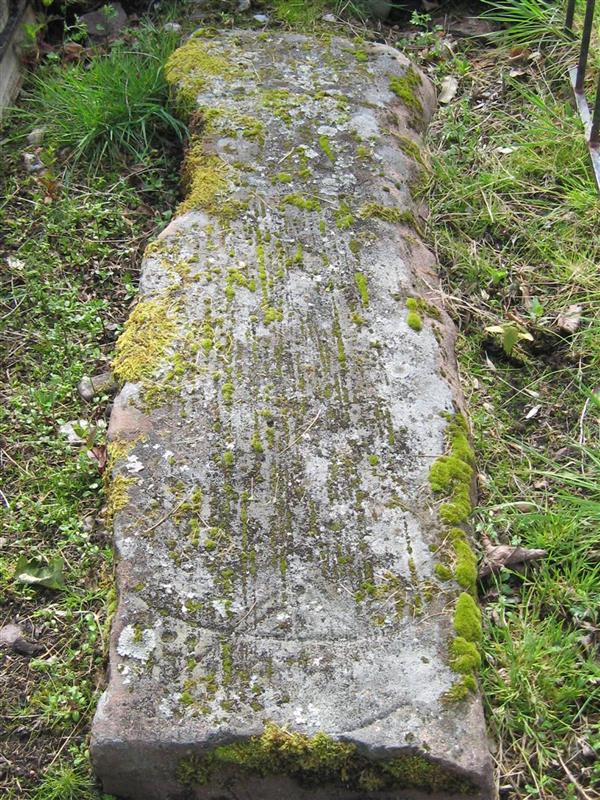 GR corrected to above by HAW. The stone lies a little to the NW of the old chapel site. It is v hard to recognise the design elements. It is now surrounded by a low fence to prevent damage during grass cutting. It lies flat as discovered as supposed to overlie a grave. It appears that the reverse may be very rough cut. A number of the earlier graves in the graveyard seem to be covered with large & heavy stones in this manner. Only one appears to obviously have the same striations as the symbol stone, although at a different angle of cutting - HAW 8/2003

Corres 6.1994 by Mr A Mack: Stone is irregular & apparently natural (save for NW end) slab 144cm max length 43 max width with 11cm depth exposed (but overlies grave so not explored) Exposed face is considerably striated (natural) running up & down its length. The symbol is crescent & v rod, virtually intact. The visible decoration in the crescent is 3 small circular depressions in tringular formation in each wing & one side by side pair of the same not far inside each road arm and near the upper arc. There may have been some design in the crescent's centre etc etc

In 1992 a Pictish symbol stone was identified on a recumbent slab in the old churchyard of Inverewe. It bears a weathered crescent and V-rod symbol at one end, decorated with a curvilinear design and arrangements of dots.
Information received from J Small, Historic Scotland, 1 July 1993.

This burial-ground, alternatively known as the Inverewe or Londubh burial-ground, is situated 80m from the head of Loch Ewe. The enclosure is roughly circular, measuring about 70m from N to S within a substantial stone wall of 19th-century character. It contains the ruins of a church, said to have been rebuilt in the 17th century but much altered to form private burial-enclosures. A slab bearing the crescent-and-V-rod symbol was identified lying W of the church in 1992.
The symbol-stone is a roughly rectangular slab of Torridonian sandstone, probably incomplete at the top, which measures 1.45m by 0.45m and at least 110mm thick. It displays prominent vertical striations, and the symbol at the top is much worn and lichen-stained. The crescent preserves two spirals which interlock at the centre to form a pelta. In each of its outer segments there is a triangular group of three small hollows, and a series of similar hollows is set inside the outer arc of its main section. Another hollow is placed in the angle of the V-rod and there are traces of the lower spirals of its right terminal, but the left one is obliterated. <1>

Poolewe, Ross and Cromarty, Pictish symbol stone
Measurements: H 1.45m, W 0.45m, D 0.11m
Stone type: sandstone
Place of discovery: NG 8603 8096
Present location:
Evidence for discovery: found in 1992 in the circular burial-ground at Poolewe, which is likely to be early in date.
Present condition: very worn, with edge damage.
Description:
This slender slab is incised on one broad face with a crescent and V-rod symbol, embellished with internal sunken dots, including groups of three in the tips of the crescent. The symbol spans the width of the slab, and it is so close to the top as it survives that there may well have been an upper symbol now broken away.
Date: seventh century.
References: Fraser 2008, no 125.
Early Medieval Carved Stones Project, A Ritchie 2017.