A chapel was located at this site before 1780. It was demolished and built over by Harold's Tower. 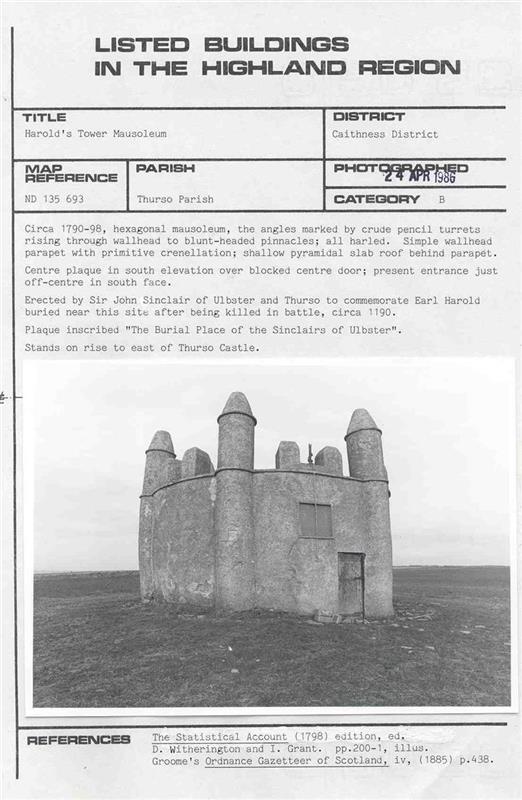 Generally as described by previous investigator, but steps to it have been removed, the burial vault has been broken into and the coffins are displaced. The mausoleum is within an embanked enclosure, 35m across, presumably that built by Sir George Sinclair. There is no trace of a chapel.
Revised at 1:2500. Visited by OS (J M) 1 October 1981.

No trace of chapel exists at this site. The mausoleum has a plaque on SW side bearing the words: 'The burial place of the Sinclairs of Ulbster'.
Visited by OS (E G C) 18 April 1962.

There was a chapel at the Hill of Clairdon on the site of which Harold's Tower was built by Sir John Sinclair of Ulbster before 1780 to mark spot where Earl Harold (the younger) is supposed to have been killed and buried at the Battle of Clardon Hill in 1196 (ND16NW 14). The enclosure is called 'Kirkua' from the temple built over Earl Harold's grave and vestiges of the chapel were visible until George Sinclair of Ulbster (father of Sir John) enclosed the ground (Torfaeus 1886).
D Beaton 1909; W Campbell 1902; T Torfaeus 1886.

The chapel at Thurso East is apparently the chapel that is mentioned in 'Orkneyinga Saga' (1780) and 'Torfaeus' and existing when the former was written.
Orig Paroch Scot 1855.