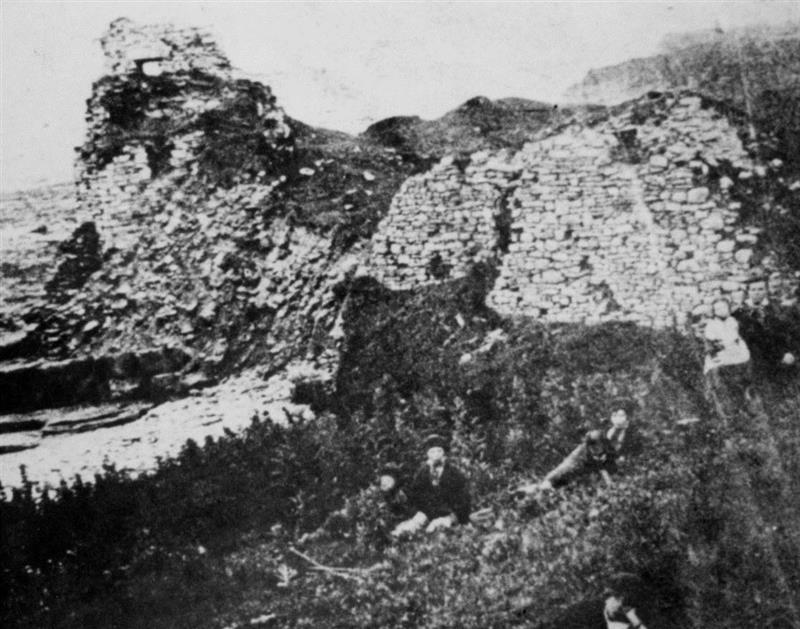 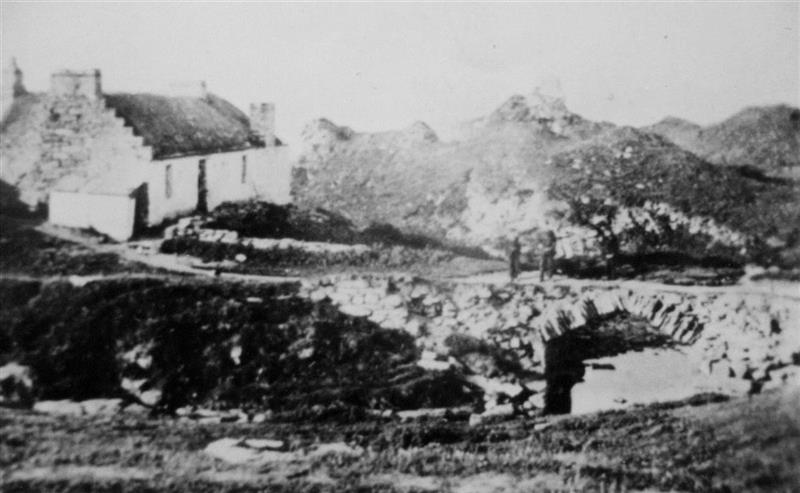 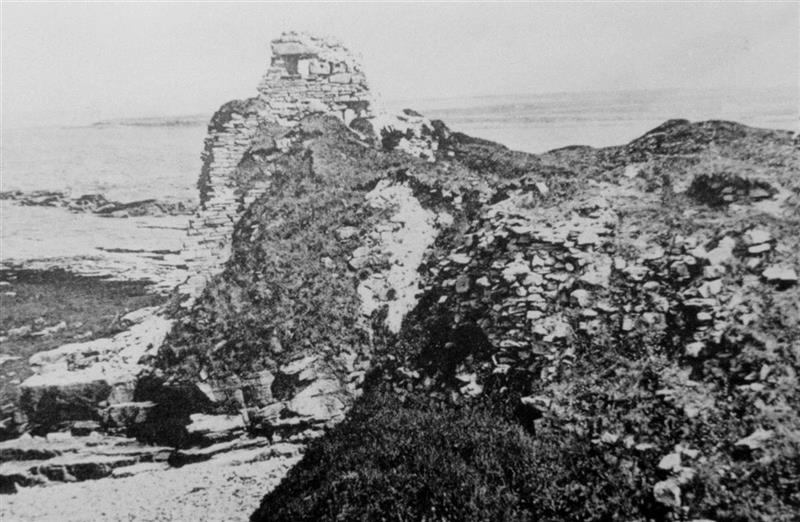 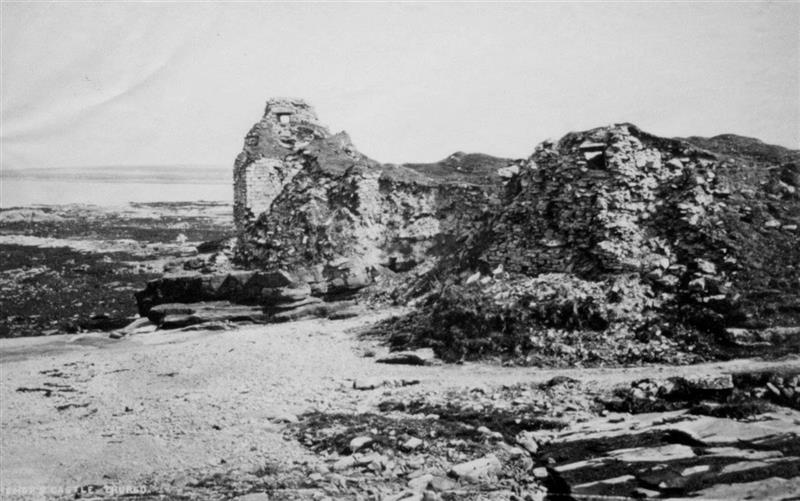 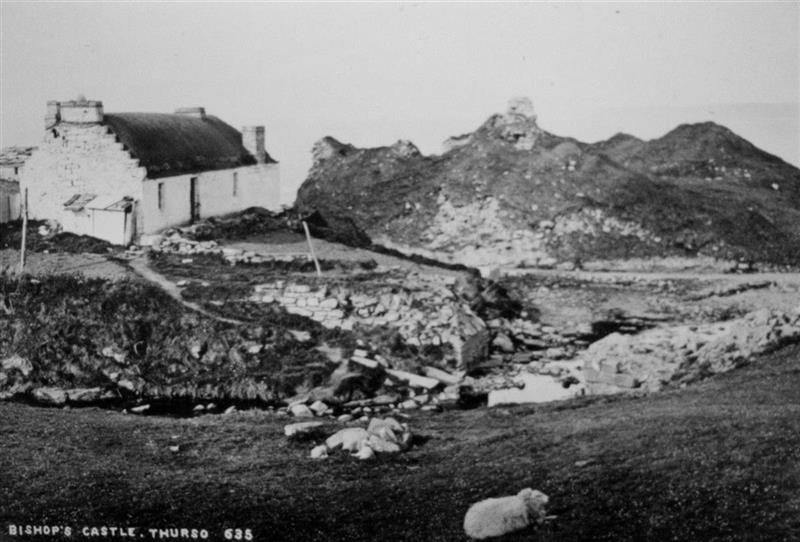 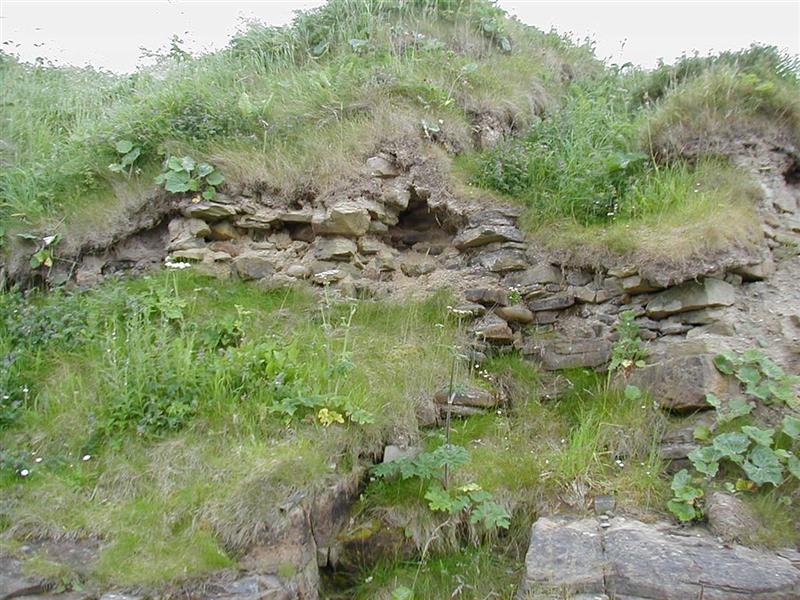 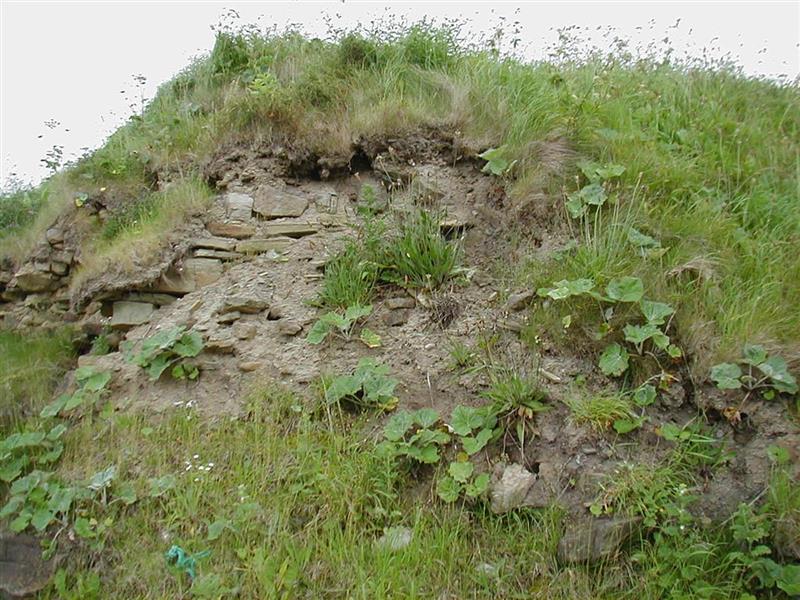 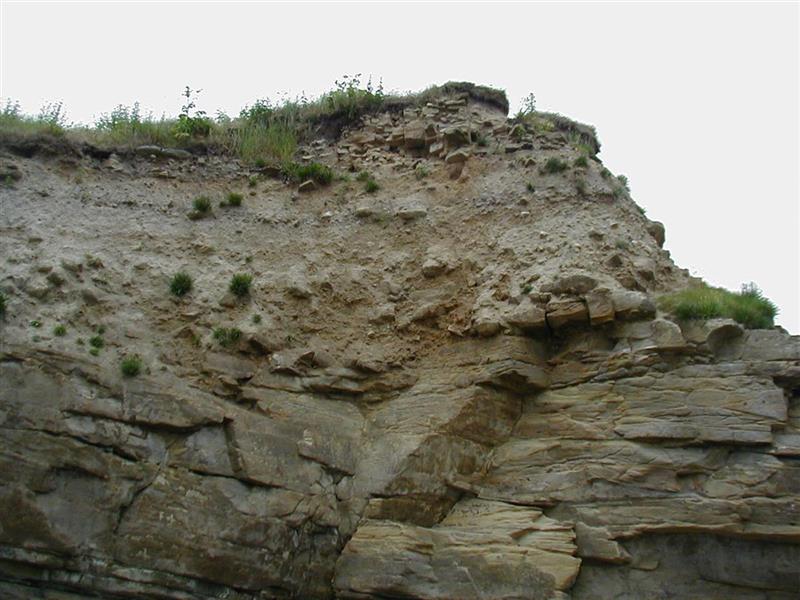 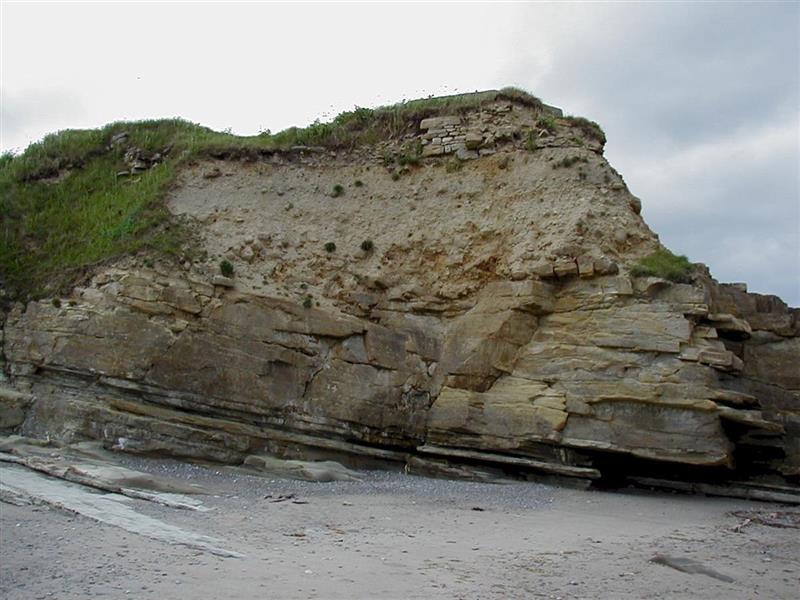 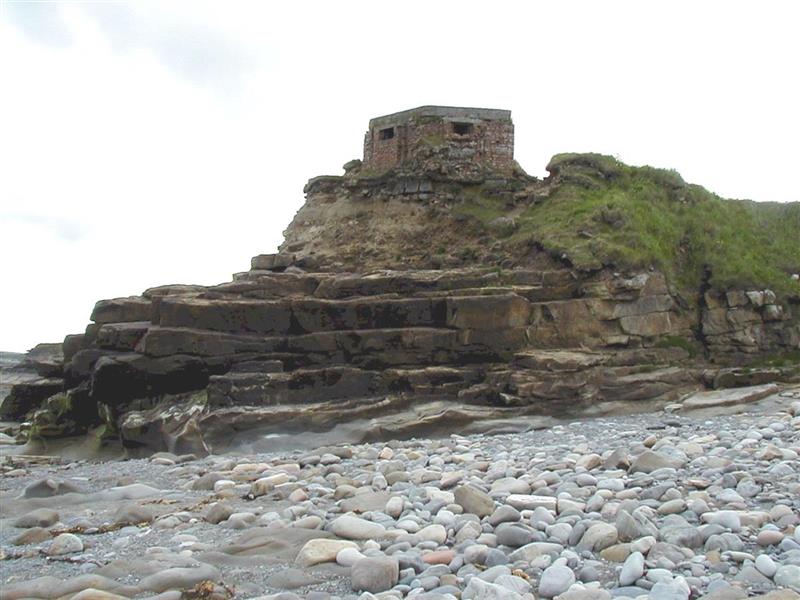 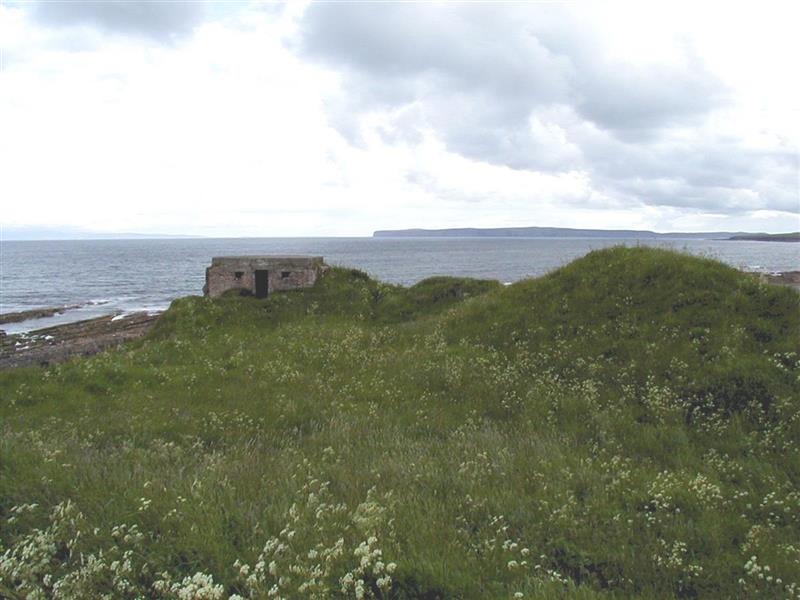 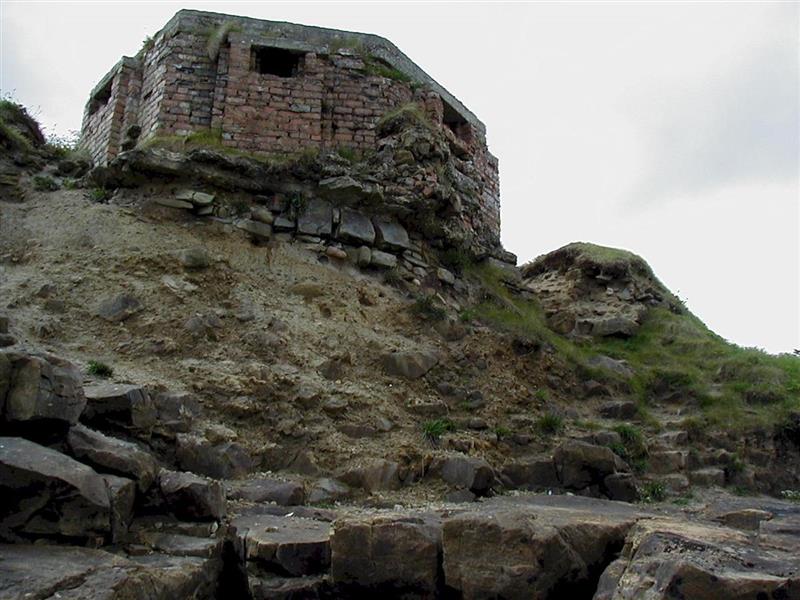 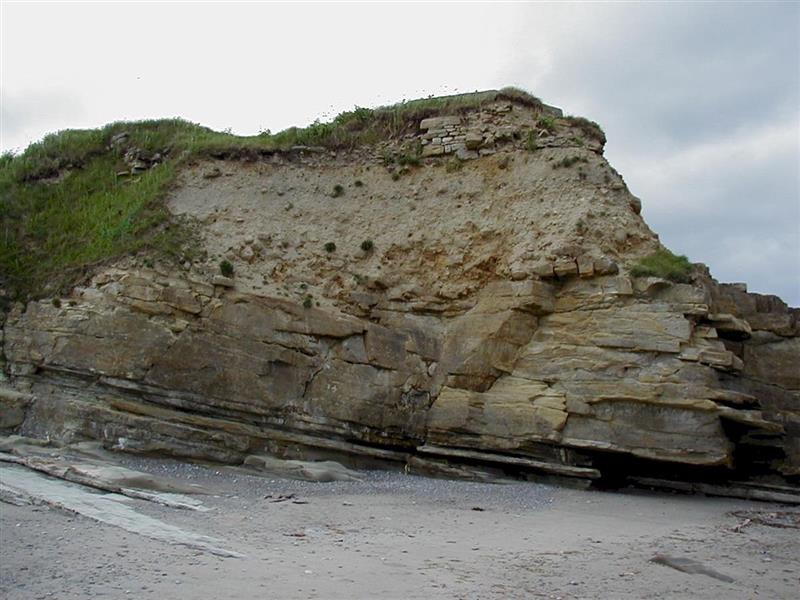 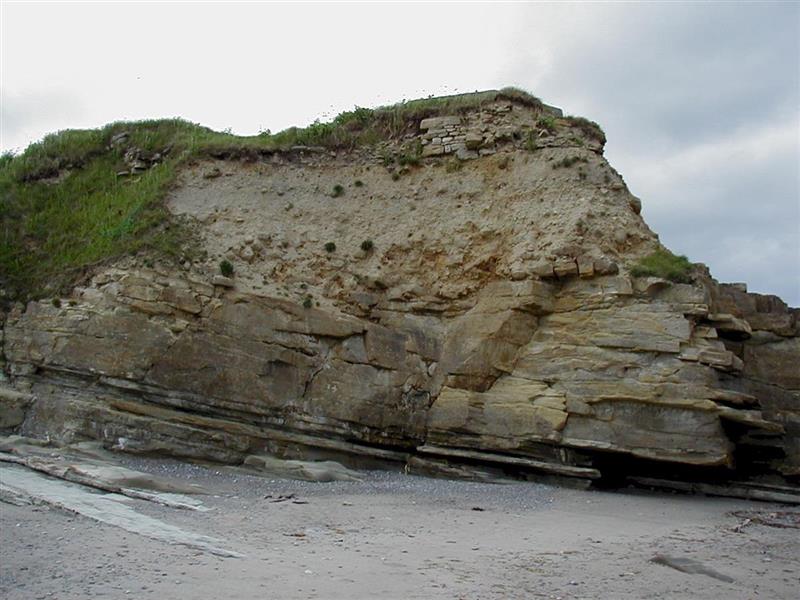 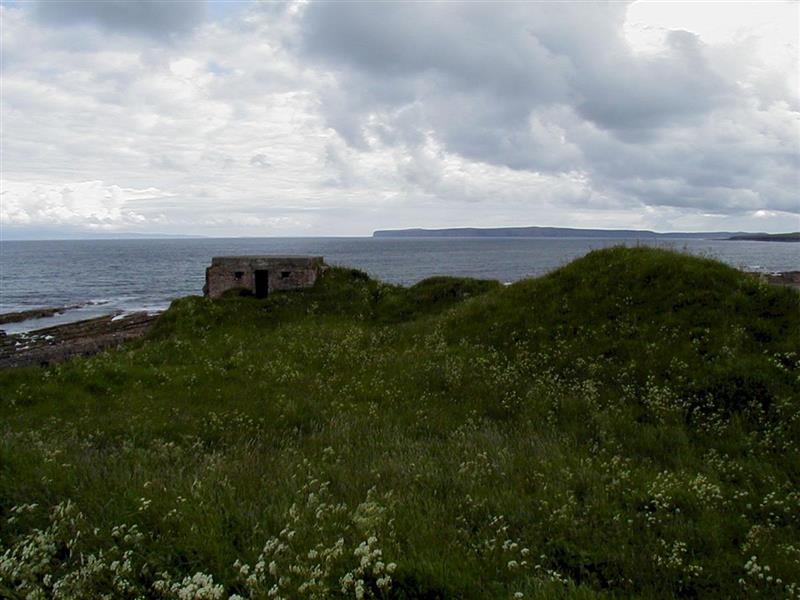 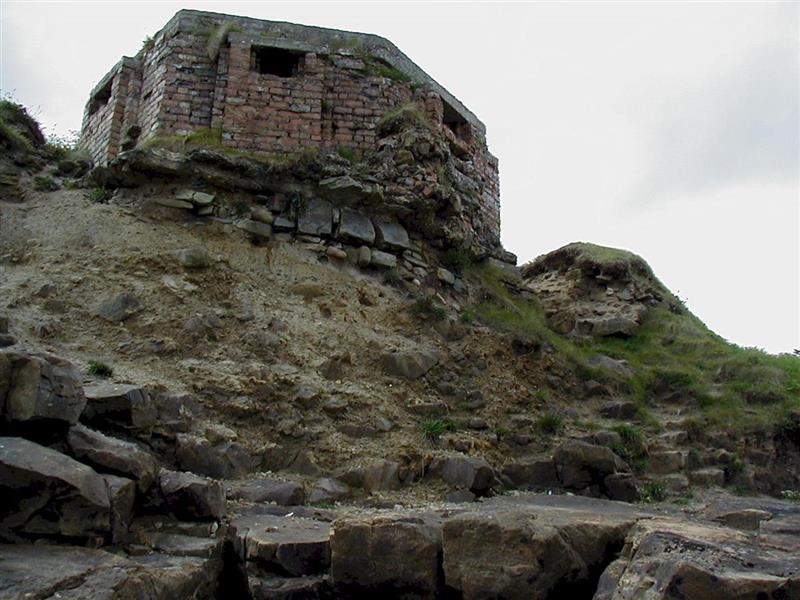 Bishop's Castle or Scrabster Castle, Thurso: On a low promontory rock rising from the shore about half a mile NW of Thurso, are the fragmentary ruins of a castle of Bishops of Caithness. The ruins of a wall at edge of rock and foundations of one or two buildings which have surrounded courtyard are all that remains. A small triangular-headed window enriched with dog-tooth ornament, taken from ruins, is built into an outbuilding at Scrabster House.
Earliest record of castle seems to be 1328 an account claimed for keeping castle of Scrabster during vacancy of see. Other mentions 1455 for keeping castle of Scrabstoun, 1478, and 1544, when Earl of Caithness seized it, and 1557, when John, Earl of Sutherland, was appointed constable. 1726 it was described as being wholly in ruins.
RCAHMS 1911, visited 1910; Orig Paroch Scot 1855; W Macfarlane 1906-8; J B Craven 1886.

Gilbert, Bishop of Scotland, who died c1244, built Castle of Burnside at Scrabster which was inhabited by bishops until Bishop Robert Stewart (still alive in 1549).
J B Craven 1908.

Large mutilated banks of earth and stones some 3m high are all that remains of curtain wall of castle. 4 short lengths of walling, barely discernible in grass, and 3 sides of a small chamber perched precariously on cliff edge near a wartime gun emplacement, were only evidence of buildings to be seen. The area is considerably dilapidated, and promontory on which remains stand is being greatly reduced by sea erosion.
Revised at 1:2500. Visited by OS (W D J) 17 April 1962.

'A piece of tower at the E end, having a dungeon below it, which is supposed to have extended beneath the courtyard, and a few pieces of the wall are quite visible, but the shape of the edifice cannot be accurately traced. There was a drawbridge of the land side of the castle, but all trace of it has long since vanished.'
Name Book 1872.

Examination 1970 by E Talbot on behalf of inspectorate of ancient monuments produced 12-13th century pottery from cobbled courtyard, as well as identifying minor domestic structures in heavily disturbed interior of Castle. This suggested that it might be the 'borg' mentioned c1196 (in Orkneyinga Saga) and further excavation 1973 suggested that it might overlie a prehistoric structure, possibly a broch. A tower, illustrated c1870, at head of promontory (Smythe 1870), is no longer in evidence and may have been removed when a World War II pill-box was built (see ND16NW 183), or it may have been undermined by sea.
P R Ritchie 1970; E Talbot 1973; Smythe 1870.

The fragmentary remains of Scrabster Castle are generally as described by RCAHMS (1911).The curtain wall is partly destroyed by erosion and partly obscured by turf banks, but here and there short stretches of outer face are exposed. On W side the inner wall-face of a building about 5m square with a mural chamber is exposed, and there appears to have been a further building of indeterminate size, now overlaid by a pill-box, at extreme N end of promontory.
Visited by OS (N K B) 10 March 1982.

Bishop's Castle - archive photos supplied by councillor R Saxon. His father worked on a dig many years ago, circa. 1910?.

The site is being visibly eroded and parts of walls are visible, On the W side of the castle a wall butting on was seen, on the east side of the promontory part of walling roughly parallel with the beach was visible in the eroding banks in at least two places. The features under the pill box are also visible. The pillbox is supported on 3 large rounded stones that are now loose. Once these collapse it is likely that the pill box will fall, bringing down substantial portions of the castle deposits. HAW 9/2002

Paul Humphreys suggests that doorway is exposed at lower levels and that a decorated lintel is now loose and at risk - HAW 2/2003
See ND16NW0073 for site details and photographs.

Human remains (teeth and bones) within Caithness Horizons collections are said to be from Bishop's Palace, Scrabster (Acc. No. ARC1004a-1). No further details on the date and context are known however. <1>