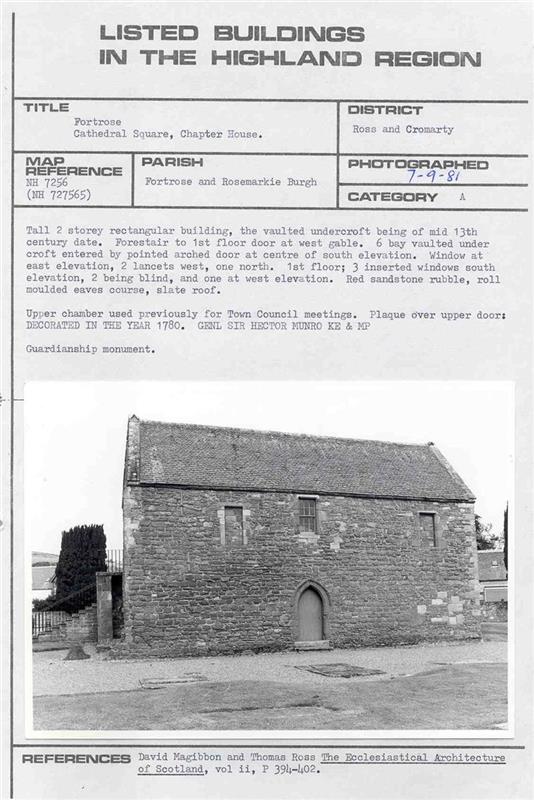 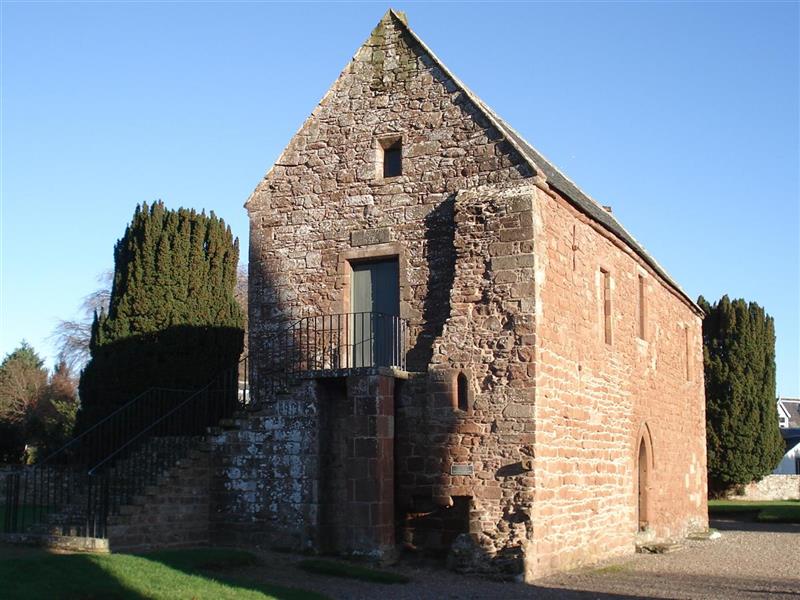 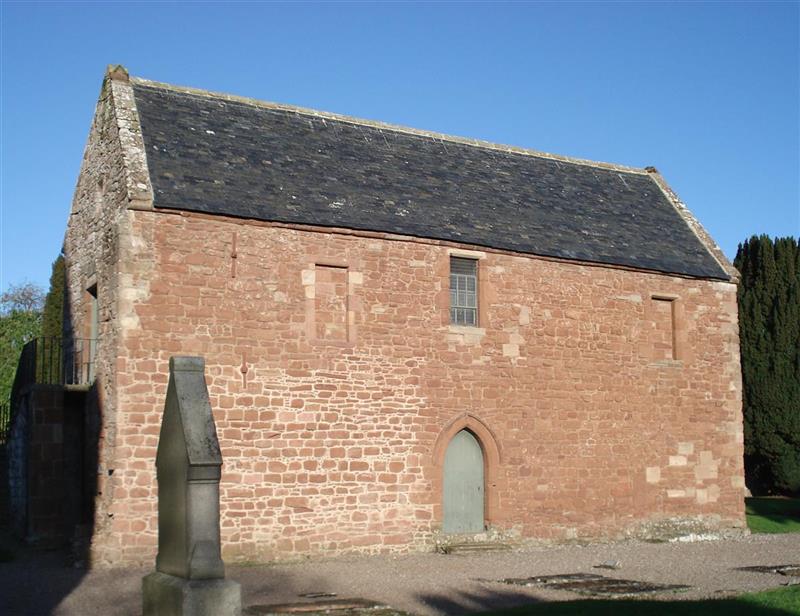 Cathedral (NR) OS 6"map, (1959)
The cathedral of Bishops of Ross, dedicated to SS Peter and Curitan, was transferred from Rosemarkie (NH75NW 7) to Fortrose c1235. Of this period only undercroft of Chapter-house remains; upper storey of which was rebuilt in C19th as a Court-house. All other remains date apparently from L14th and E15th centuries and consist of vaulted S aisle of nave, and bell-tower. The ground plan was recovered about 1870 by excavation by H.M. Commissioners of Woods & Forests. Cathedral fell into disrepair about time of Reformation, but was partially repaired 1615 and by 1649 was not very ruinous. Traditions says that Cromwell subsequently removed most of masonry.
D MacGibbon and T Ross 1896-7; A R Scott 1873.

The remains of cathedral are as described above. Area of nave is defined by shale and only a few base stones of buttresses remain. The graveyard to S. is still used occasionally, extant portion of the Cathedral has recently been re-roofed.
Visited by OS (N K B) 9 March 1966.

The chapter house building was listed at Category A in 1971.

The chapter house was included within the Fortrose Cathedral Scheduled Monument in 1995.

A series of excavations and a watching brief were carried out by Kirkdale Archaeology at Fortrose Cathedral in February and March 1996. The aim of project was to establish whether the landscaped layout presently in place accurately reflects the location of buried elements of the cathedral structure. The extent of surviving remains was patchy, with noticeably superior masonry revealed towards the W end of the site, perhaps indicating an assumed two-phased construction programme between the nave and choir. Sponsor: Historic Scotland G Ewart and D Stewart 1996

Rough sketch showing the position of Cathedral, Manse and crofts of the Dean and Chapter of Ross.
1859 GD128/30/7/1

The condition of the Cathedral and the Seaforth Tomb.
Roderick MacFarquhar comments on this in a letter which accompanies an estimate for enclosing the churchyard with a wall and providing a gate and pillars.
1825 GD45/12/7

Estimate for enclosing the churchyard surrounding the Cathedral with a wall and the addition of a gate and pillars. Letter from Roderick MacFarquhar, Fortrose, comments on condition of the Cathedral can the Seaforth Tomb.
1825 GD45/12/7

Fortrose is a small town in Black Isle, Ross-shire, on N side of the inner part of Moray Firth, nearly opposite Fort George. It is situated ten and a half miles NE of Inverness. It was Cathedral Town of the Bishopric of Ross. A very small part of ancient Cathedral yet remains entire. National Library of Scotland, Edinburgh contains, among the "Uncatalogued MSS of General Hutton", and numbered 134 in Vol 1, an external view of 1815 and an internal view of the Chapter House dated 1819.

Archaeological monitoring was undertaken by Kirkdale Archaeology during two phases of work in December 2005 and March 2006. The first phase was carried out to locate existing electrical services, while the second involved the digging of a trench for the installation of a new power supply for the Chapter House. No finds or features of archaeological significance were encountered during these works. Archive to be deposited in NMRS. Sponsor: Historic Scotland.
P Fox and C Shaw 2006

The chapter house was reassessed by Historic Environment Scotland in 2017-18 as part of a national dual designations project. It was proposed that the chapter house be delisted but that it would remain part of the overall Fortrose Cathedral Scheduled Monument. <1>

The chapter house was delisted by Historic Environment Scotland with effect from 31/01/2018. <2>