An Orkney-Cromarty type long, horned cairn with a Camster- type chamber. The cairn appears to have originated as a round cairn. 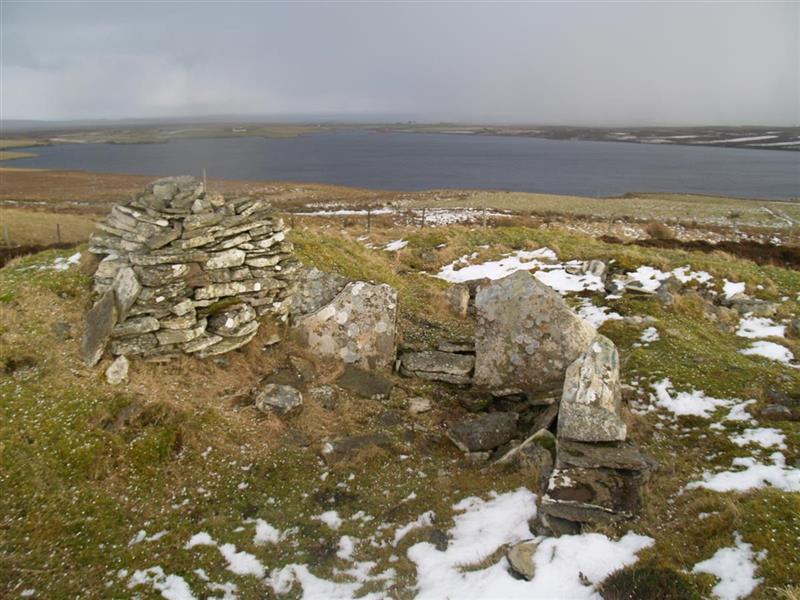 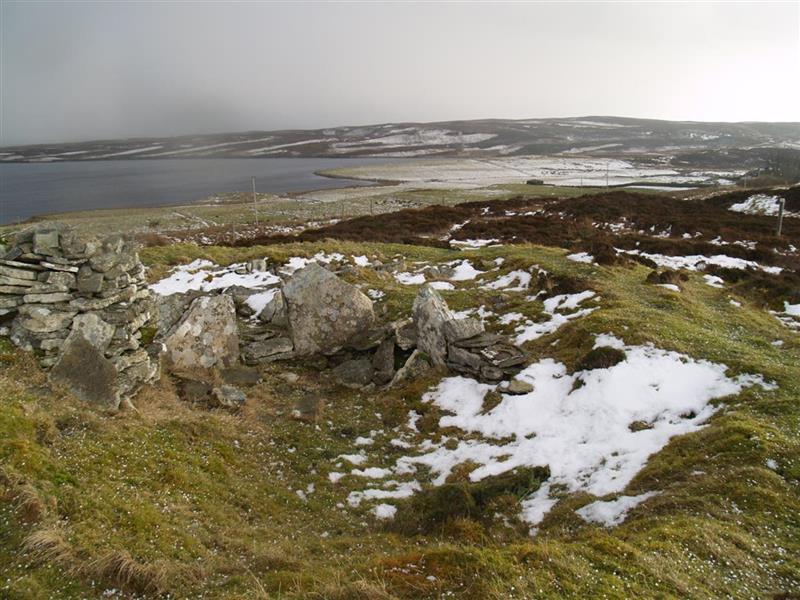 An Orkney-Cromarty type long, horned cairn with a Camster- type chamber. It is 190ft long and varies from 25-45ft in width. The site has been much robbed and is partly overgrown by peat and heather. The chamber has been re-used and a cist, which contained an urn and seventy 'tiny, round lignite disc beads' of a single string jet necklace, inserted in the outer compartment. Ten beads are in NMAS (EO 132); remaining finds have been lost.
A S Henshall 1963; J G Callander 1916. <1><2>

The cairn has a distinct 'head and tail' profile, and, in addition, the excavator noted a wall revetting the back of the round mound containing the chamber. These facts, together with the very short passage, indicate that the cairn originated as a round, chambered cairn too small to effect the plan of the subsequent long cairn, except that the axes of cairn and chamber do not coincide. The cairn is probably relatively late in date.
A S Henshall 1972. <3>

Information added to the public contributions module on Canmore states that the remaining beads from this necklace (seventy two in total) are in the Pitt Rivers Museum, Oxford (accession no. 1884.76.133). The beads are recorded as being excavated by Joseph Anderson and Robert Innes Shearer in August 1865. Further information can be found in the Museum's online catalogue. <4>

This is the northern of a pair of chambered cairns at South Yarrows, lying 190m NW of the steading and 250m N of its neighbour to the S (ND34SW 5). The cairn stands on the crest of a broad, heather-grown ridge that slopes gently down from S to N and falls more steeply to the E and W. The cairn measures about 52m from ENE to WSW by about 17m in breadth, increasing to 24m across the horns at its E end and about 11.3m across the horns at the W end. The cairn material rises up to 1.6m in height at the E end, where an axial burial-chamber is visible. The chamber was originally accessed by way of a passage that ran back into the body of the cairn from the centre of the concave forecourt. This passage measures about 3m in length by 1m in width; its ENE end has been blocked by crude walling, but at the WSW end there is a pair of portal stones framing an entrance 0.4m wide into an ante-chamber. The ante-chamber measures 1.6m in length by up to 1.8m in width and at its WNW end there are a thicker and taller pair of portals stones forming the entrance into the main chamber. The main chamber measures 4.8m in length by 2.7m in width and is constructed of edge-set slabs and drystone walling up to 1.2m in height. According to Anderson the main chamber was once divided into two compartments by another two upright slabs, but no trace of these are visible today.
The visible remains of this cairn and the documentation that relates to the history of its 'exploration' strongly suggests that the E end of the cairn was originally a free-standing chambered round cairn with its chamber and passage aligned ENE and WSW. Later this cairn was extended to the WSW to form a long cairn, but the axis of the latter is at least 10 degrees to the N of that of the chamber and passage. The difference in height between the E end of the cairn and its tail has been accentuated by erosion in recent times, caused by a trackway that is used by wheeled vehicles crossing the cairn from N to S. The footings of a wall about 35m in length lie immediately E of the cairn (Mercer 1985, 223, No. 15, Fig.87).
(YARROWS04 234)
Visited by RCAHMS (AGCH) 30 June 2004