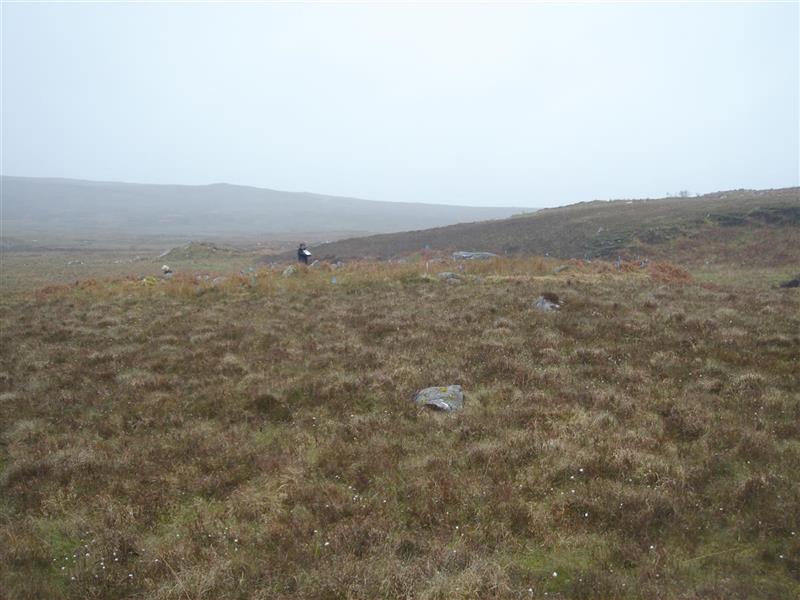 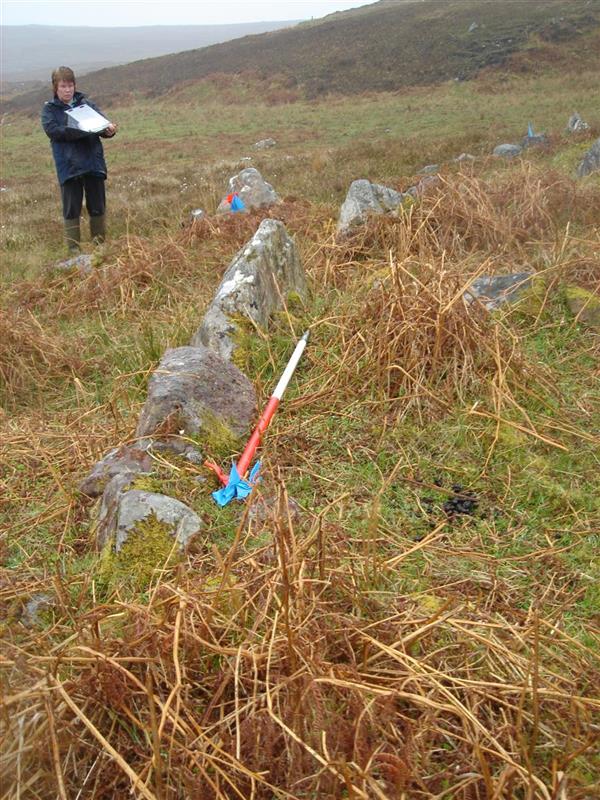 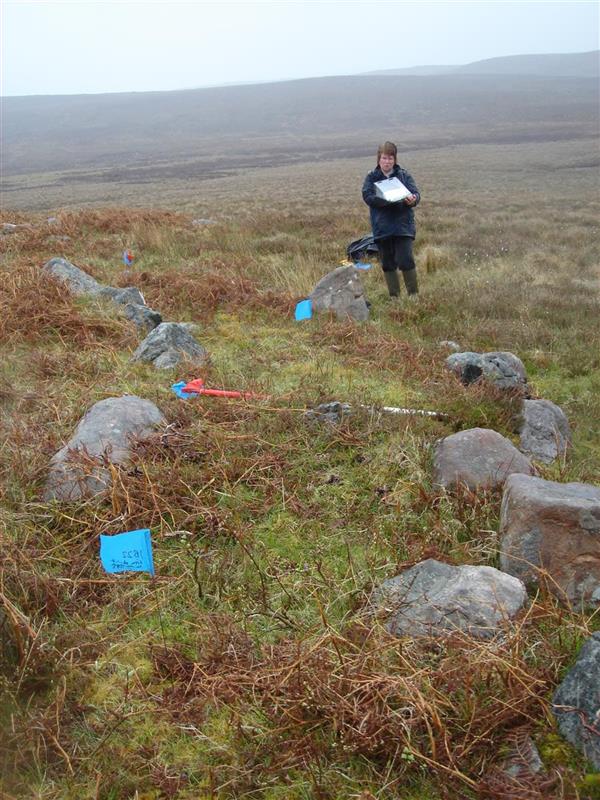 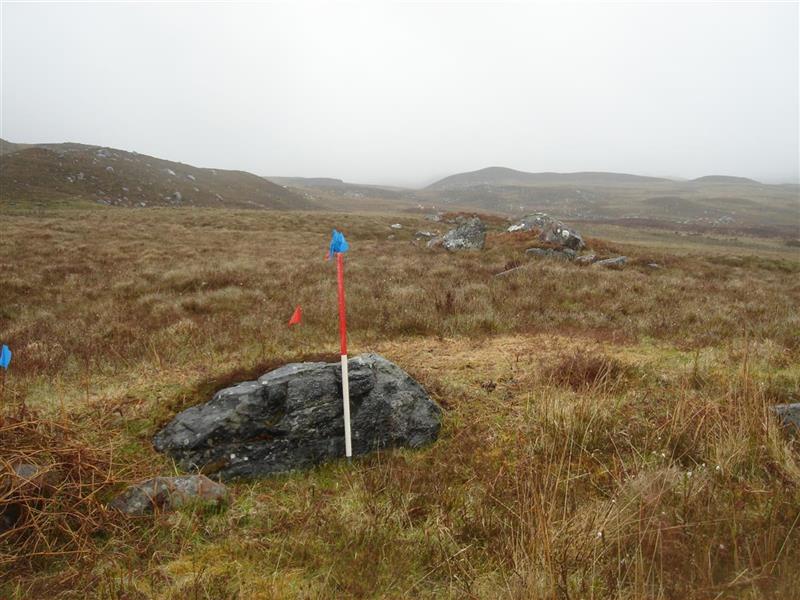 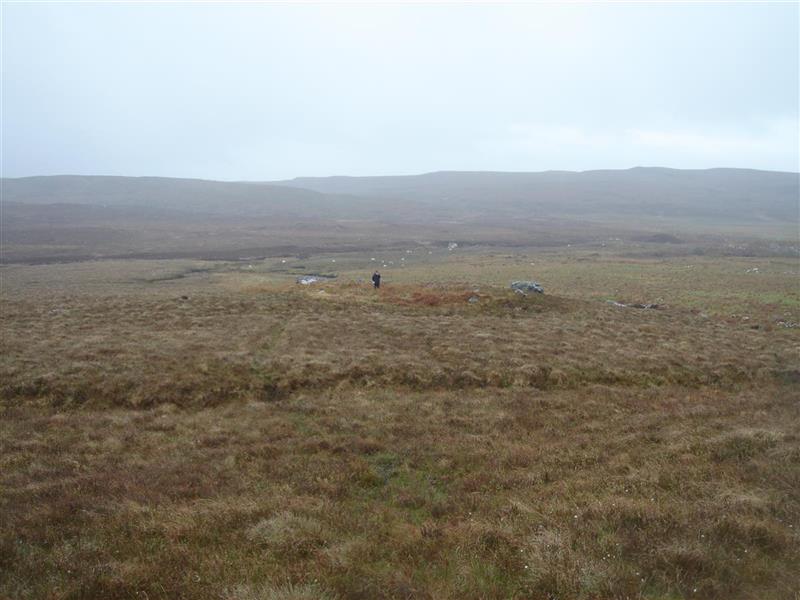 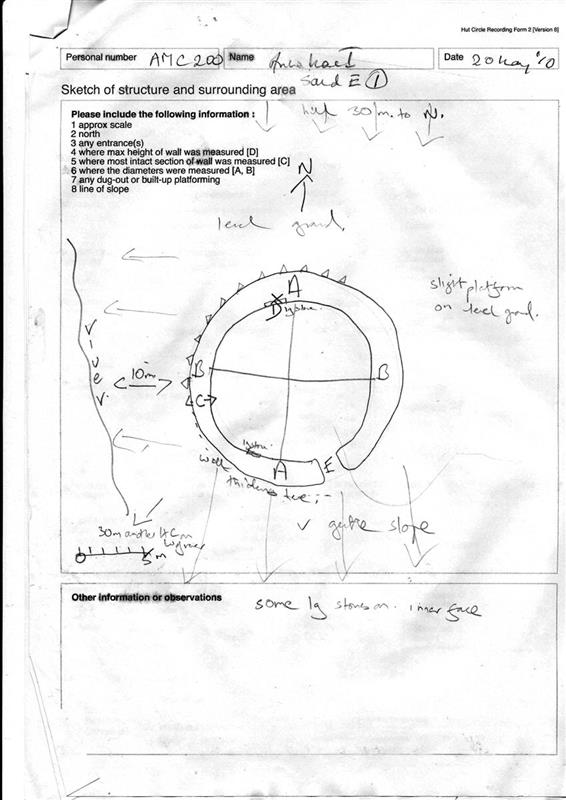 A hut circle at Doir 'a' Bhaird. First recorded by the OS in 1964 as the larger of two well preserved enclosures, this one being double-walled.

177583 880443 Sand East 1 AMC200: The hut circle was visited by A Welti and A MacInnes in 2010 as part of research for a dissertation on hut circles in Wester Ross. This was part of a degree course overseen by Aberdeen University. There are over 30 probable hut circles in the area around Sand River and its tributaries. The land may have been especially fertile as, at the end of the Ice Age, the path of the ice retreat from the furthest points of the Wester Ross Readvance follows the areas of clustering of the recorded Sand River hut circles. The melting ice would have dropped many rocks of all sizes together with a variety of minerals. The landscape would thus have contained easily accessed building materials on fertile ground. AMC200 lies on a fairly level platform built up on its western side from a gentle slope. The circular stone structure is 10m from a stream, Allt Mor, and 200m from the Sand River which might have been navigable in the prehistoric period. The sea is at a distance of 3000m. The site has panoramic views inland. The surrounding landscape cover is a mixture of heather, bracken and grass. The interior is mainly bracken and grass. The ring banking and some wall facings are clearly visible. Average inner diameter is 11.75m, outer diameter is 16.0m. The double skinned wall is 2m thick with maximum height 0.6m. No measurements were possible around the southeast facing entrance. However the wall thickens slightly on the southern entrance terminal. AMC200 is 70m from GS003 (see MHG) which lies to the west of Allt Mor, and 70m from AEMC007. There are 21 hut circles recorded in this survey of the area named Sand East. Most of the hut circles appear in clusters of two or three very close to one another which in turn are near to other small clusters of two or three. Association, based on distances between all these structures and clusters, is likely. Field survey alone, without dating, cannot provide answers. The clusters of two or three HC's are as follows: AMC200 with GS003, AMC201 with AMC202 and AMC203, AMC204 with AMC205, AMC206 with AMC207 and JB300, JB301 with JB302, JB303 and JB304, JB305 with JB306, JB307 and JB308, JB310 with JB311. Neither JB309 or JB312 have a close pairing. AEMC007 seems complex and different from the other structures. <1> <2>

Note: This record originally included all the then known hut circles in this area, but these have been disaggregated and now have their own records [IS-L 25/10/2017].