Drimnin Castle was built c.C15 and was demolished to make way for St Columba's Chapel in 1838. 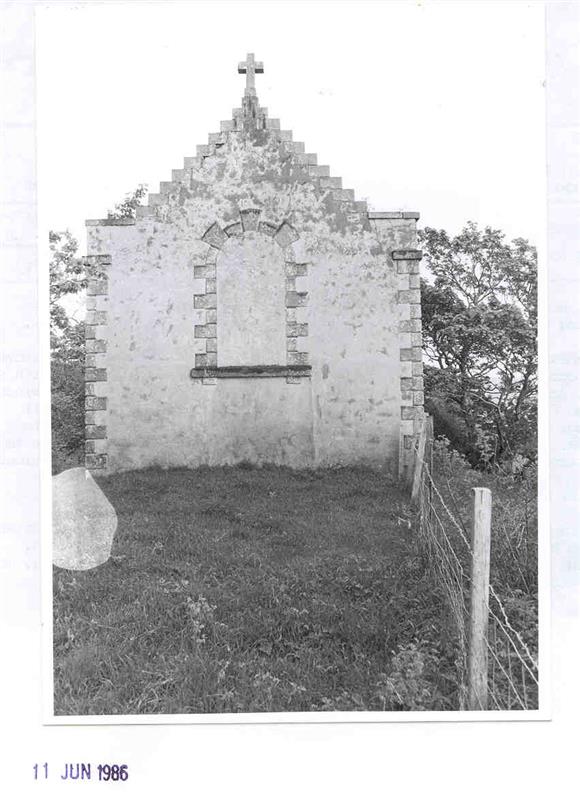 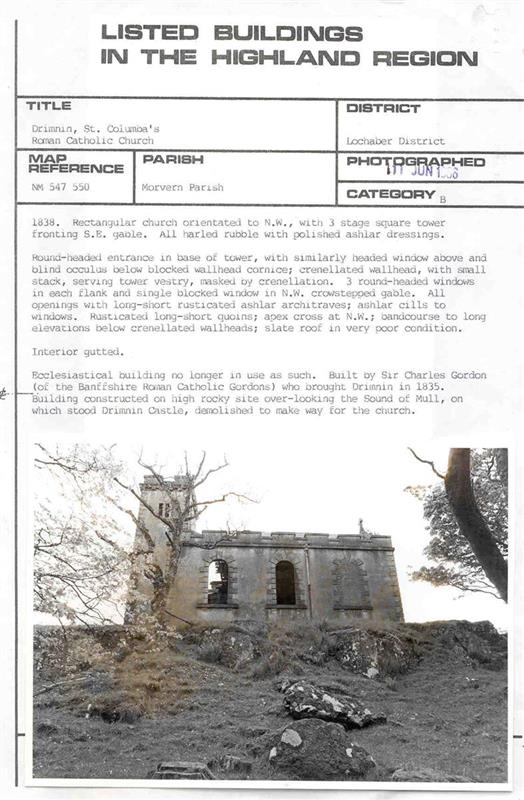 Chapel of St. Columba (RC), James Anderson, 1837 Smartly dressed and until lately roofless chapel perched on a rocky eminence formerly occupied by the remains of Drimnin Castle. The altarpiece was painted by William Dyce, and the interior decorated by D. R. Hay of Edinburgh. All this, of course, has perished, but the chapel remains an impressive and unexpectedly grand statement in an area never home to more than a handful of Roman Catholics. Inaccessible by road, it was abandoned in the 1930s, though its battlemented tower remained a stirring landmark above the Sound of Mull. Now being restored.
Taken from "Western Seaboard: An Illustrated Architectural Guide", by Mary Miers, 2008. Published by the Rutland Press http://www.rias.org.uk

Bonnavoulion, St Columba's Church (RC). Disused. Built and designed by the Edinburgh wright-architect James Anderson (1838) on the site of Drimnin Castle, overlooking the Sound of Mull. Harled box with an E tower. Forceful detail. Crowstepped gables and battlemented parapet, the tower's rising above a corbelled blocking-course. Rusticated quoins at the corners and at the round-arched windows and door; big bullseye in the tower's top stage.
J Gifford 1992.

The chapel building has been de-roofed; only a few neatly-stacked slates and pieces of lead remain outside the door.
Information from Mrs. P Martin (Peat Inn, Fife), 23 September 1998.

The chapel, still roofed, occupies the N end of a ridge around the extremity of which is a wall, about 0.9m thick, presumably part of a walled enclosure associated with the castle. The S end of the ridge is occupied by modern graves.
Visited by OS (R L) 10 June 1970.

Drimnin Castle (Site): This building formerly occupied the level summit-area at the N end of an elongated rocky outcrop of crag-and-tail form overlooking the Sound of Mull. The castle is shown on an estate-map of 1836 (as a rectangular building on an E-W axis, with a small projection, perhaps a stair-turret, at the E end of the S wall. The site is no more than 13m in width from E to W and if this representation is accurate, it bears out the description of the castle, written some years later (NSA 1845), as a 'comparatively unimportant building'. In 1838 it was demolished by Sir Charles Gordon of Drimnin, to make way for a private Roman Catholic chapel which is now derelict. There are no visible remains of the castle with the exception of the lime-mortared rubble wall, noted by the OS field surveyor of uncertain date, measuring 0.9m in thickness and standing to a maximum height of 0.9m. This encloses the area, some 11m in length, between the chapel and the rocky cliff that bounds site to N.
There are no early records of this castle, although lands of Drimnin were in possession of MacLeans of Coll throughout 16th and first third of17th centuries. The plan-form of the building, as shown on the estate-map of 1836, suggests a date no earlier than end of 16th century, and it may have been built in second half of 17th century when family of MacLean of Drimnin became established. The castle was abandoned by about middle of 18th century.
RCAHMS 1980; Info from D Wilson, 1836 (held in SRO, RHP 3258); NSA 1845.