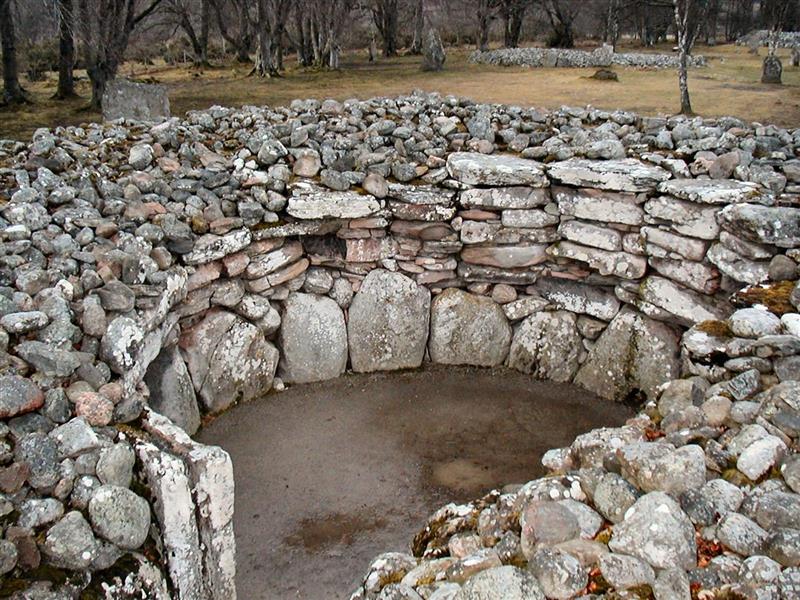 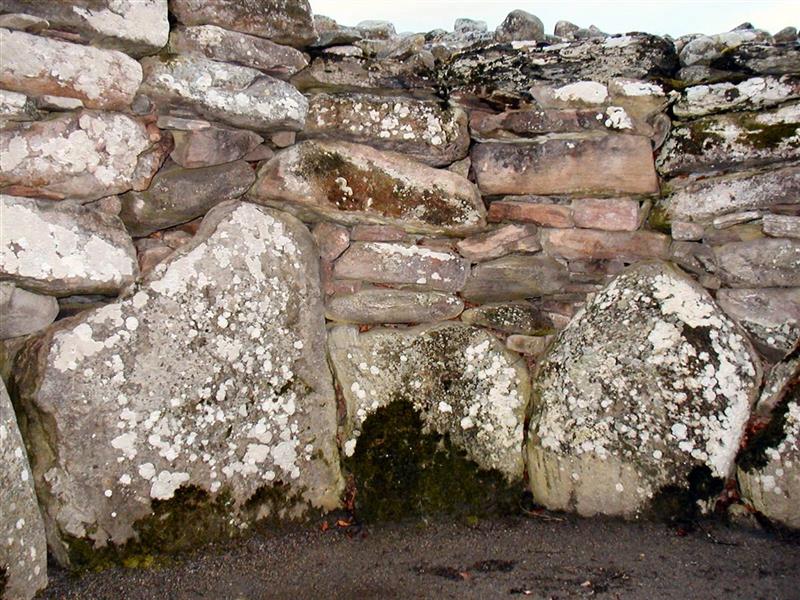 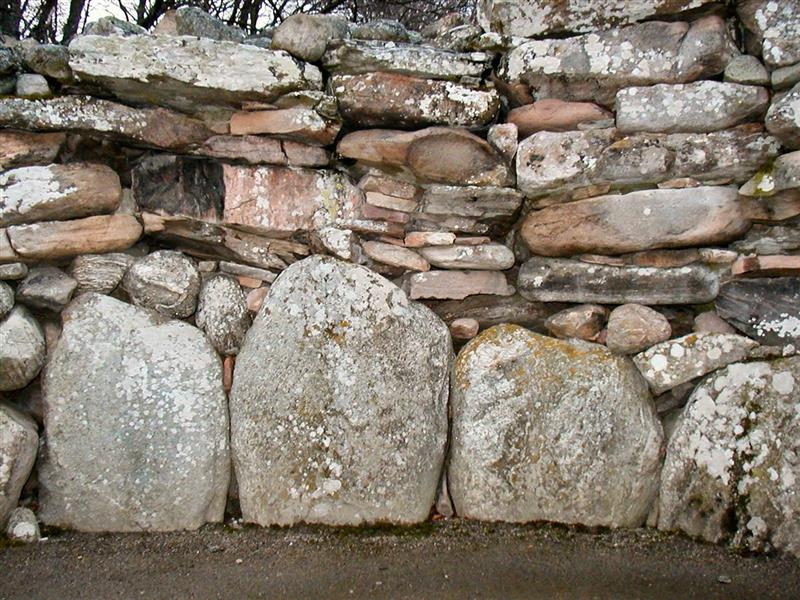 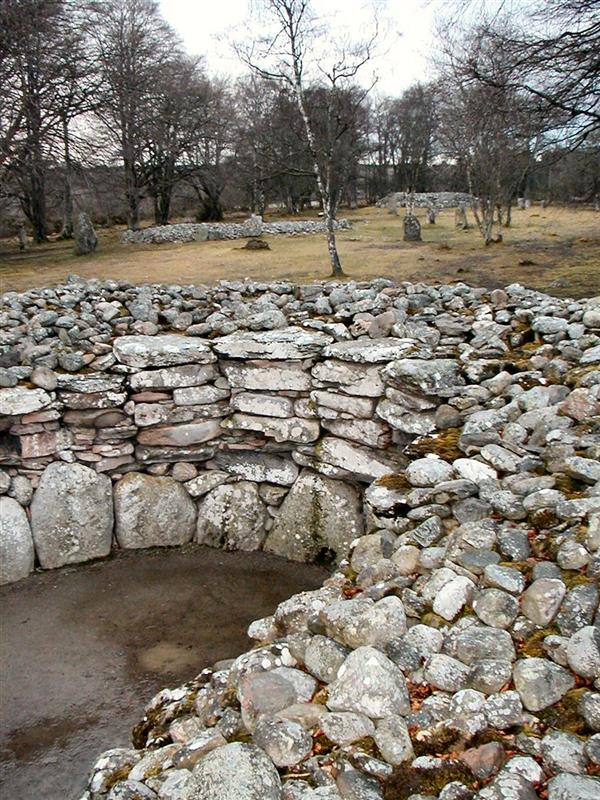 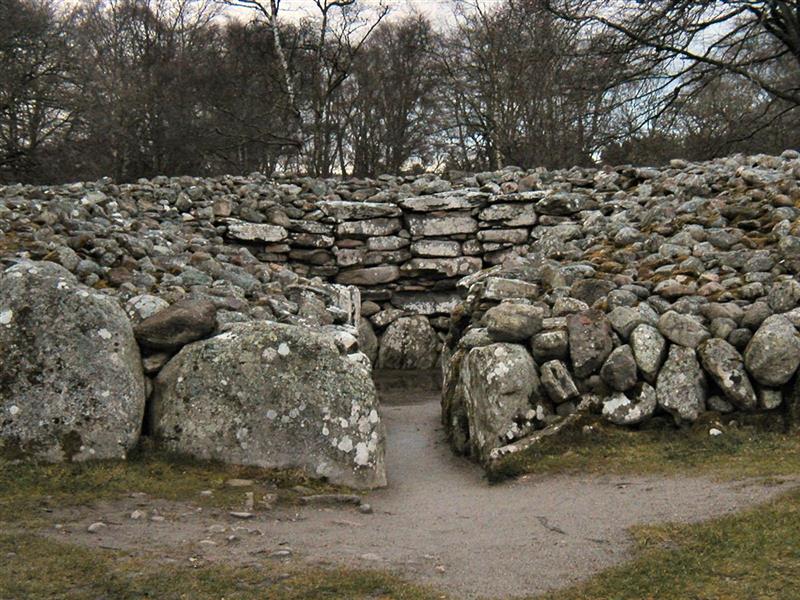 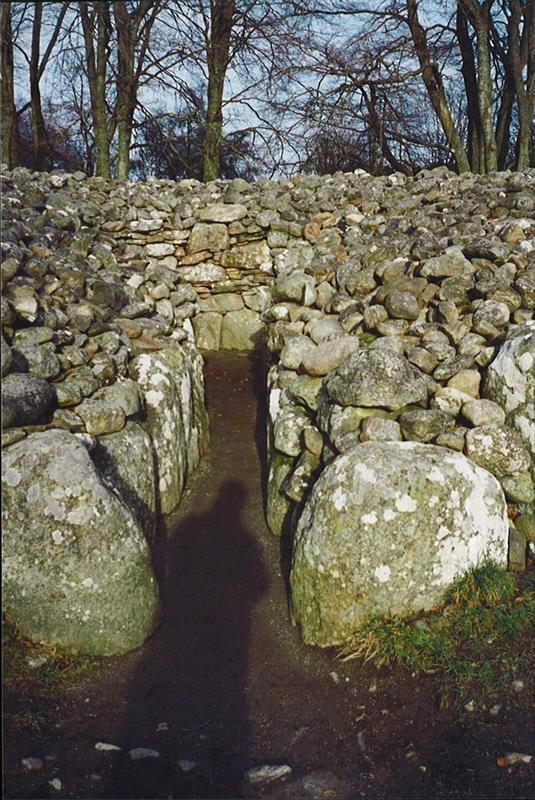 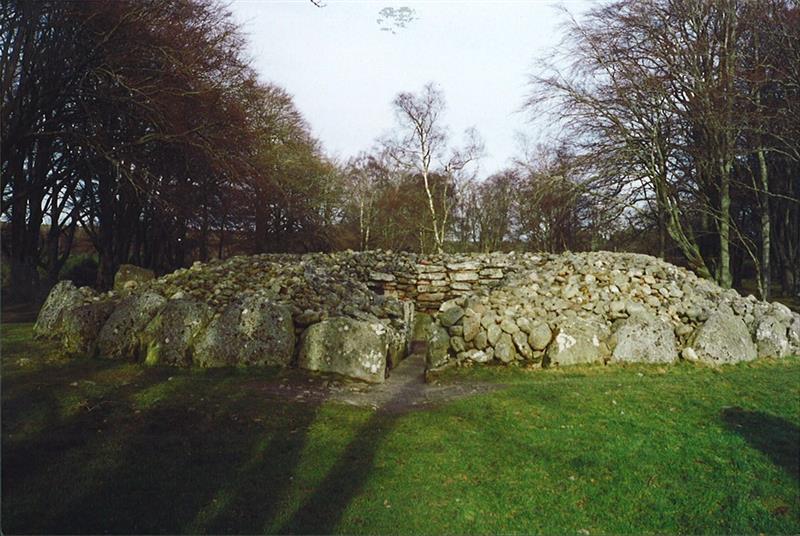 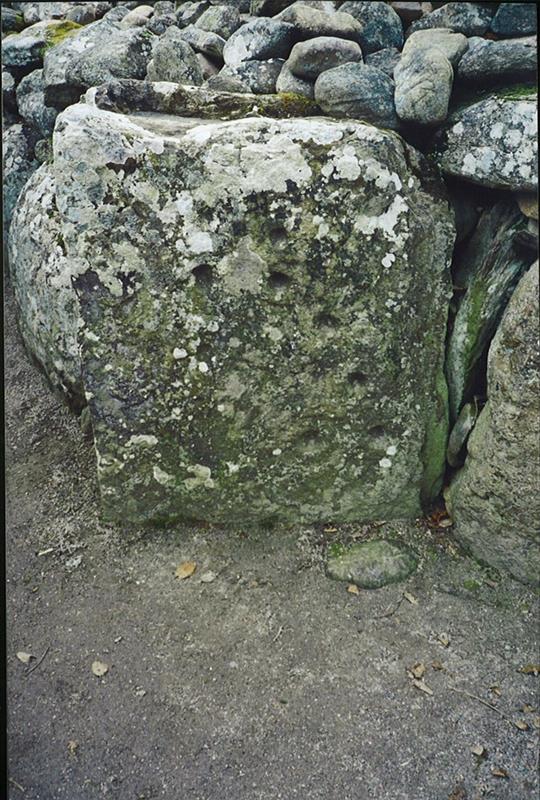 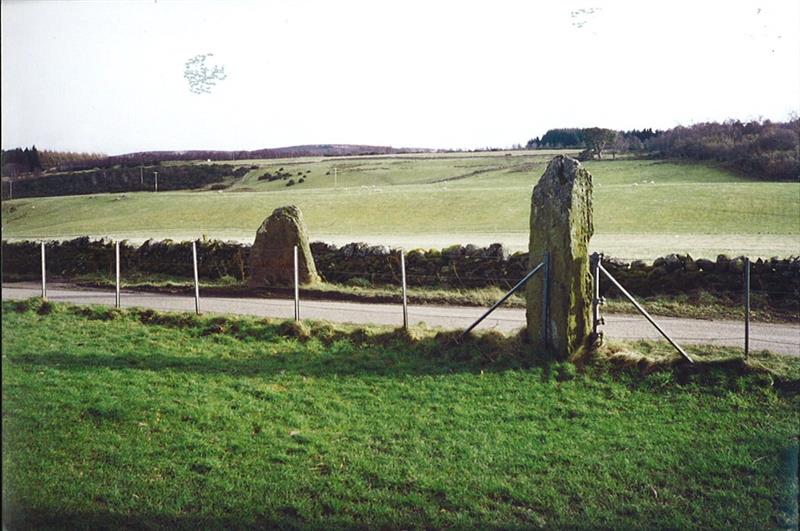 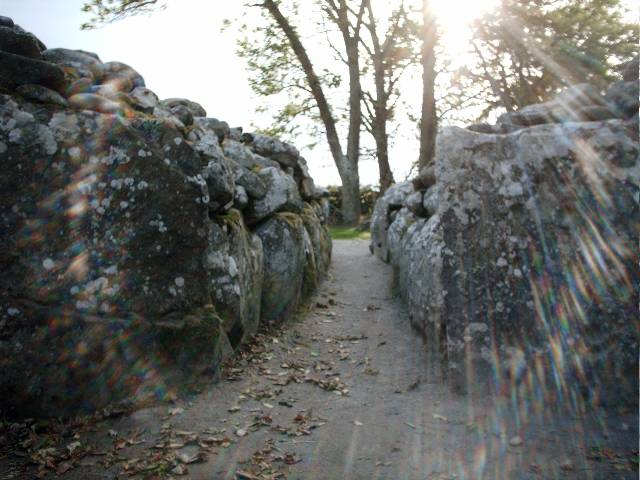 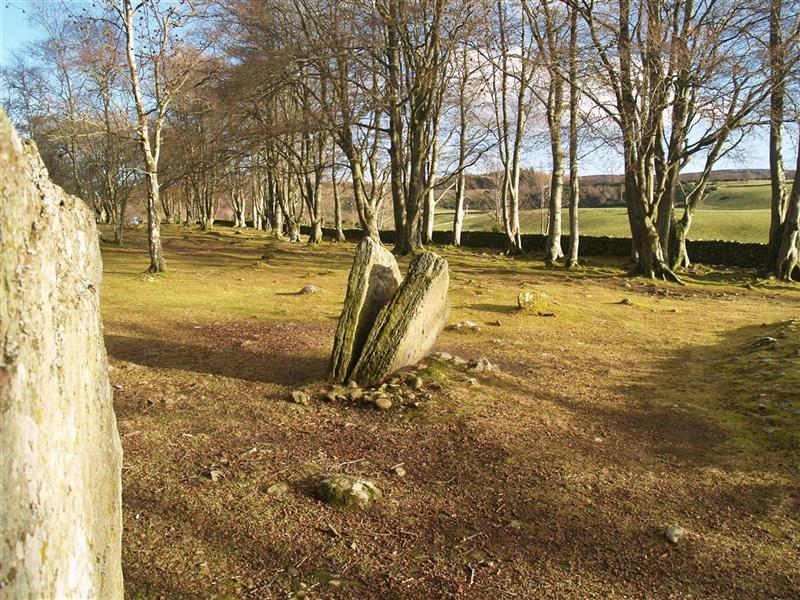 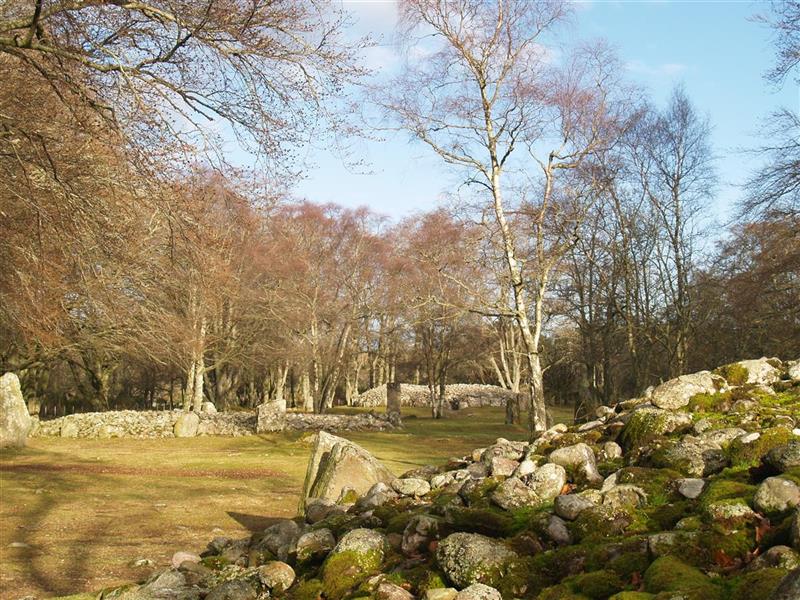 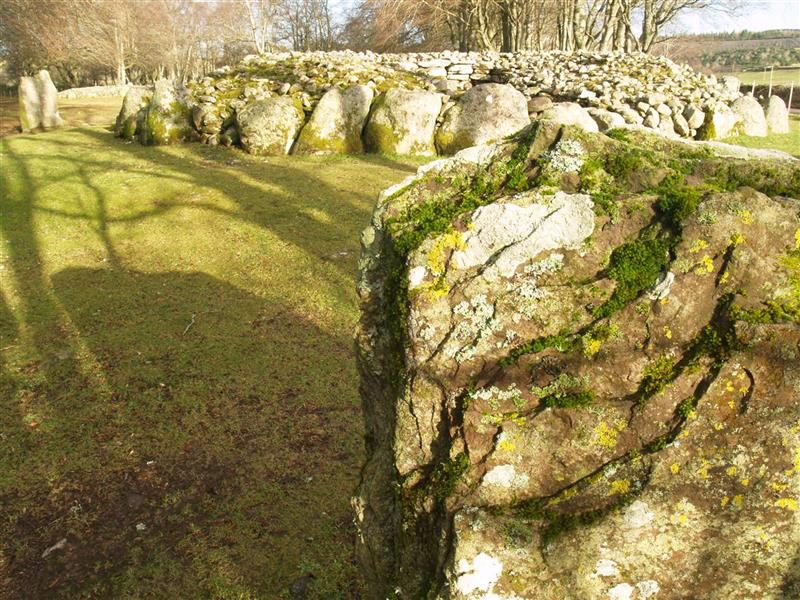 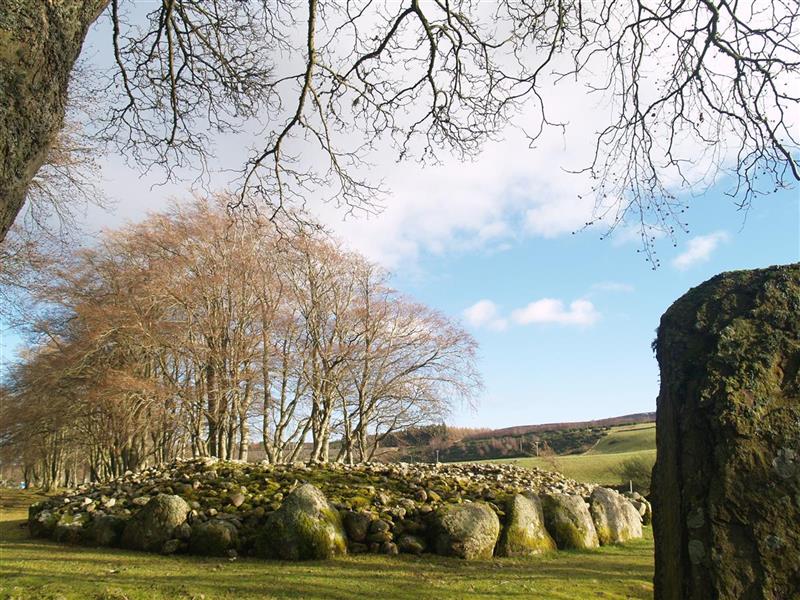 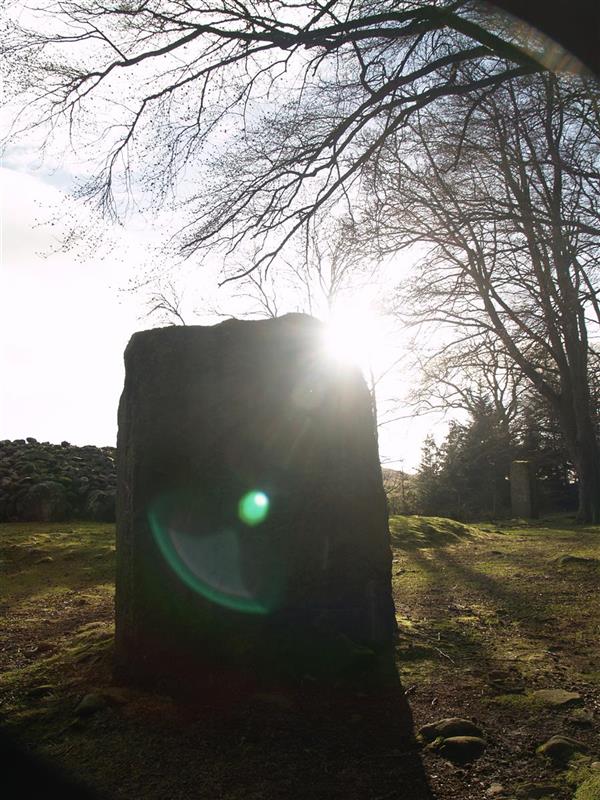 Clava passage-grave (Balnuaran of Clava, South-west) This cairn is one of the group of three at Balnuaran and lies only 80ft south west of the central cairn. It is very similar to the north-east cairn, but the circle of monoliths and platform round the cairn have been disturbed by making the road which skirts the south-east side of the monument though it does not interfere with the cairn itself.
The kerb of large boulders is almost complete and encloses a cairn 52 feet 6 inches in diameter, though a flattening of the kerb at the entrance reduces the diameter on the axis of the chamber ot about 50 feet. The kerbstones are largest by the entrance where they are 3 feet 6 inches high. The cairn of bare stones stands over 9 feet high. There is a very distinct platform of stony material stretching 12 feet to 13 feet 6 inches outside the kerb except where it has been partially destroyed on the SE side.
The entrance is from the south-west. The passage, 19 feet 9 inches long and 2 feet wide, is constructed of two rows of upright boulders with one or two courses of masonry above, giving a total height of up to 4 feet. The chamber is not exactly circular in plan, measuring 11 feet 6 inches by 13 feet in diameter. The walls stand to a total height of 6 feet 9 inches, with a maximum of six courses of flattish but irregular stones slightly oversailing, their outer ends projecting well back into the cairn.
The surrounding circle of standing stones now has ten monoliths remaining, all but four of which are known to have been reset. The three stones to the west of the entrance had fallen and were re-erected about 1876, the next stone is probably in position, the north west stone has been "restored". The second stone to the east of the entrance has been moved to be parallel with the road and the north-east stone has been turned to form the end of a wall. The circle seems to have been set 24 to 28 feet outside the kerb.
Cupmarks are said to occur on a number of stones. On the boulder forming part of the foundation of the chamber of the west of the entrance there are certainly twelve cupmarks. The surface of the sandstone slab on the corresponding position on the south side of the entrance has now flaked away so much that no cupmarks can be seen. On the third stone on the south side of the passage there are perhaps two or three cupmarks but the stone has a very irregular surface. The loose stone noted as having two cupmarks which formerly lay in the centre of the chamber is no longer to be seen, of the three monoliths reported as cupmarked those on the south and northwest are so weathered that no definite marks could be seen but the monolith now set upright on the west certainly bears three, if not more, on its inner surface.
In the chamber have been found parts of two pots, since lost, which were possibley secondary flat-rimmed ware. A quantity of calcined bones were found in and around the pot.
T D Lauder 1830; W Jolly 1882; J Fraser 1884; ISSFC 1885; S Piggott 1956; A S Henshall 1963, visited 15 April 1957.

SW cairn and NH74SE 10 (central cairn): The 1994 excavation at Balnuaran of Clava had three main aims. First, it sought to identify how far the site has changed its appearance as a result of modem restoration of the monument. A main focus was the largely unpublished excavation of 1930-31. Two of these trenches were reopened and other work was carried out on the SW passage grave. This showed that the chamber 'floor' identified in that work was in fact the old land surface beneath the monument. Both there and at the central ring caim excavation had extended into the natural fluvio-giacial gravel, In the case of the central ring cairn unrecorded excavation around the end of the last century had resulted in the clearance of the interior. The rubble removed from that part of the site was added to the material of the cairn.
Second, it sought to resolve the structural sequence at both monuments. At the SW cairn the external ramp was of a single phase. It had been built simultaneously with the kerbstones, which lacked any sockets. At the central ring cairn, there is evidence that the cairn, the stone circle and the external rays which connect these features together were all built at the same time. The line of at least one of the rays seems to have perpetuated division in the internal construction of the ring cairn. In between its kerb and the circle of monoliths was a setting of flat slabs overlying an unaccompanied cremation- This formed the focus for a distribution of pieces of worked flint and quartz.
Third, it aimed to obtain radiocarbon samples. Four such samples were collected, from the old land surfaces beneath each of the cairns, from the cremation outside the central ring cairn and from the socket of one of the monoliths enclosing that site.
Sponsors: Society of Antiquaries of Scotland, British Academy, Society of Antiquaiies of London, with considerable help in kind from Historic Scotland, Highland Regional Council and Reading University.
Bradley 1994.

NH 7576 4447 The second season of excavation (see Bradley 1994) focused on the NE passage grave (NH74SE 1) and investigated the chronological relationship between the five main elements on the site: the internal structure of the cairn, its kerb, its entrance passage, the platform upon which the site appears to be built and the stone circle which surrounds the entire monument. All proved to have been constructed during a single phase. The cairn contained a core of massive blocks and redeposited turf or topsoil which formed a stable structure supporting the corbelled burial chamber. This was covered by a skin of smaller rubble which was revetted by the kerbstones. These were only shallowly bedded in the ground and had been held in position by a rubble ramp piled up against the exterior of the monument. The composition of this ramp or platform matched the constructional sequence in the cairn itself, with quarried slabs similar to those employed in the chamber towards the base of this deposit and rounded boulders towards its surface. This feature continued unbroken across the entrance to the tomb and extended outwards as far as the stone circle. One of the monoliths belonging to this circle lacked any socket and was bedded in the tail of the ramp- thus it could not have been erected after that material was in position. The entrance passage had been cleared of any archaeological deposits during an unrecorded excavation. A few flecks of cremated bone were found on the surface of the platform. Over a hundred lithic artefacts were recovered during the excavation and samples were taken for study by soil micromorphology, pollen analysis and radiocarbon dating.
A section was also cut through the rubble ramp of the SW passage grave (NH 7568 4447) at the point where the kerbstones were at their lowest. In this case the kerb lacked any sockets and again the ramp must have been a primary feature of the monument. It was constructed in exactly the same manner as the platform of the NE cairn, but in this case it had been surfaced with flat slabs.
Sponsors: British Academy, Historic Scotland, Reading University, the Society of Antiquaries of London and the Society of Antiquaries of Scotland, with additional assistance from Highland Regional Council and National Trust for Scotland.
R Bradley 1995.

The passage graves are identical to each other, and the NE cairn is convincingly dated to the Early Bronze Age. The SW cairn, however, on the basis of its radiocarbon dates, was reused in the Late Bronze Age, at the same time the small S Ring Cairn was in use, indicating two phases of activity to the Balnuaran cemetary.
R Bradley et al, 2000

NH 757 444. A broken fragment of sandstone, 19.5 x 10.1 x 7.2cm, was found near Clava Cairns. It has a series of incised grooves, in the form of 3 or 4 concentric arcs, 1 short arc and 2 or 3 parallel lines. The object was found in a collapsed part of a drystone wall to which it was obviously not related. The wall is on the SE side of the public road past the farm and the Clava Cairns. The find is temporarily held by the reporters.
M R and G R Curtis, 1996

Radiocarbon dates were obtained as part of the archaeological investigations by Bradley, and were published in his 2000 publication. This cairn was identical to the NE cairn (MHG3013), which was securely dated to the Early Bronze Age. The radiocarbon dates from this cairn however indicated that it was reused in the Late Bronze Age, at the same time as the S cairn (MHG3002). <1>