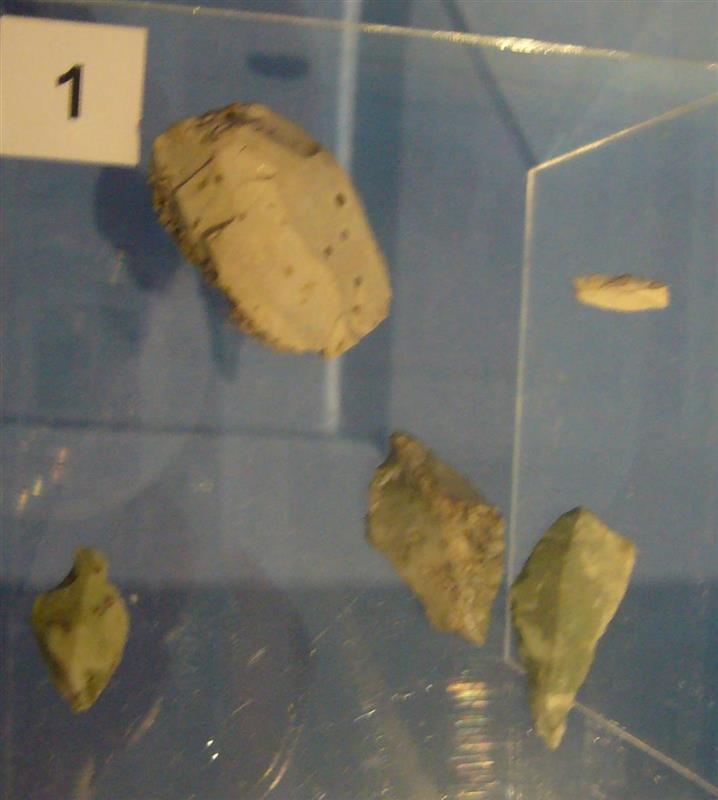 NG 567 000 The site was discovered in the upcast from a newly constructed track in November 1999. Initial inspection revealed the presence of a prolific lithic scatter comprising artefacts made predominantly of Rum bloodstone and including narrow blade microliths. The site was identified as potentially of great interest due to its location on the 20m raised beach which dates to the late glacial period, and to the presence in the assemblage of possibly early lithic types: tanged points. Historic Scotland funded initial work to cover the exposed sections and prevent further damage, and a small assessment excavation was carried out in May 2000 with the objectives of assessing the size, preservation levels, artefact types, and date of the main site.
A total of 2647 flaked lithics were collected from the spoil alongside the track throughout winter 1999-2000. Another 261 came from three subsidiary sites. Excavation in 2000 concentrated on one trench (Tr1) across the new track, together with four test pits. Three soil pits were also dug. The preservation of a greasy black occupation layer in the vicinity of Tr1 was confirmed. This layer sits directly on the raised beach and it contained artificial features: at least one scoop and a possible hearth. An assemblage of 2013 pieces of flaked stone were recovered from the excavation, together with some coarse stone and pumice. The presence of charcoal and carbonised hazelnut shell was also confirmed. The flaked stone assemblage incorporates several large pieces (including a scraper and obliquely blunted points) that are typologically early and are not common in Scotland. In addition there are narrow blade microliths that would conventionally be more appropriate to the post-glacial settlement of Scotland. The stratigraphy suggests that the narrow blade assemblage may lie in the ploughsoil and overlie the larger assemblage which seems to be associated with the dark occupation layer.
Four samples were submitted for radiocarbon dating, returning dates of the early to mid-7th millennium BC (see List of Radiocarbon Dates, p. 123). These place Camas Daraich at the start of the recorded human settlement of Scotland.
The site at Camas Daraich is of considerable interest, as the presence of potentially early broad blade lithic industries in the Scottish Mesolithic has long been problematical. Camas Daraich provides a date for both broad blade material and a possible dated association for tanged points, and it provides one site where it should be possible to examine the relationship between a broad blade industry and a more common narrow blade industry. Further excavation is not at present feasible, but it is hoped to be able to preserve the site for possible future research.
Sponsors: Historic Scotland, CFA, University of Edinburgh.
S Birch, K Hardy, G Kozilowski, C R Wickham-Jones and M Wildgoose 2000

Period should be Mesolithic <1>

The Museum of the Isles holds the excavation assemblage from the site, which comprised 3 boxes. SAIR report published on the work at the site describes the assemblage at nearly 5000 flaked lithics. <2>