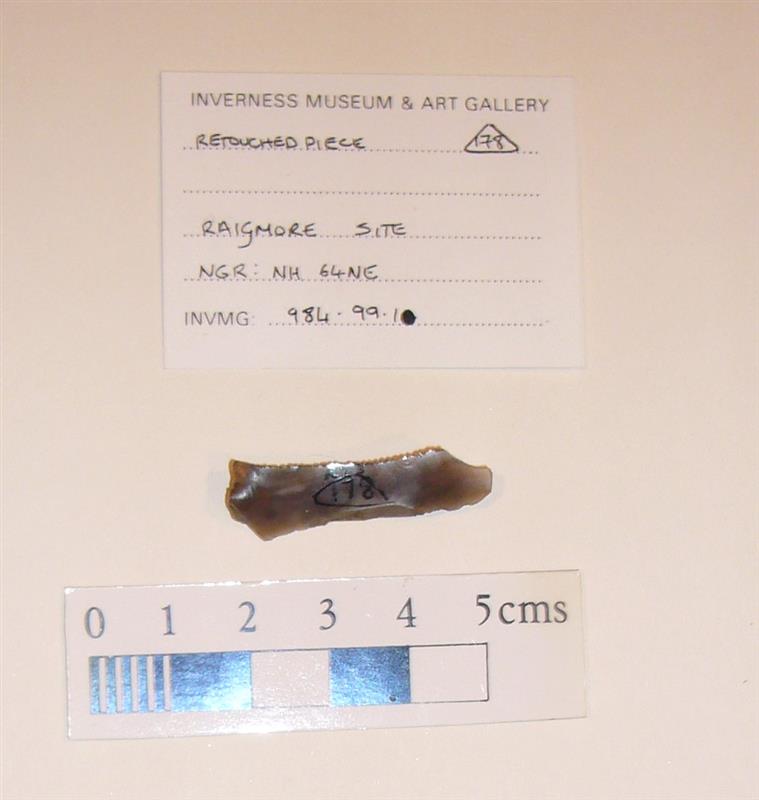 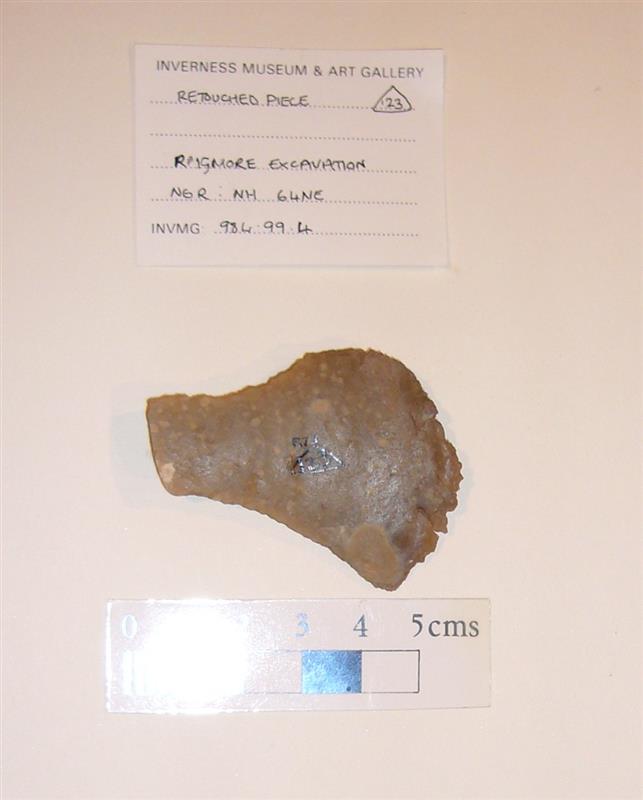 At Stoneyfield are the remains of a Clava-type cairn. All that remains is the major part of an impressive cairn kerb, 58' indiameter. The cairn itself and the internal structure have been removed, though when seen by Anderson (J Anderson 1831) in about 1824 the cairn seems to have been fairly complete. The stones forming the kerb are massive boulders, the largest being on the SW arc - the tallest, a leaning stone at the S end of this arc, 4'9" high - and other stones are 4'6" to 4'3" high. The stones in the NE arc are 1'9" to 2'9" high. Many stones have fallen inwards or outwards but have not been disturbed, and several have been reduced by blasting. There is no sign, nor is there any record, of monoliths which may once have surrounded the cairn.
In 1760 two stone circles were recorded at Stoneyfield. (a, b) (This feature was first published on OS 6"map as "Stone Circle").
A S Henshall 1963; R Pococke 1887; NSA (A Rose, A Clark and R Macpherson) 1845, G Anderson 1831; J Fraser 1884; Visited by OS (W D J) 30 March 1960.

The excavation of this cairn in 1972-3 revealed that beneath it there had been a rectangular timber building, 9.5m long with a central stone hearth, probably associated with a series of pits containing Grooved Ware. The cairn itself consisted of a heavy stone kerb with traces of an external stone platform on the W; in the central area there was a series of pits and cists, some of them contemporary with the cairn, some later. Several of the pits contained cremations, and in one of the cists there was a Food Vessel. A Cordoned Urn with a cremation had also been deposited in the cairn. Other articles found included a cup-marked stone, a 2nd century Roman brooch, and a sherd of coarse ware.
A S Henshall 1963; D D A Simpson 1973, 1974; RCAHMS 1979.

The full excavation report of the 1972-3 rescue excavation was published in 1996. It suggest three phases of construction for this site, of which the kerb, enclosing a platform cairn of Clava tradition, belongs to the second phase. 39 stones of the kerb had survived, either in situ, fallen or pushed over. A further 7 stones lay in the interior, formerly part of the structure. The best preserved part of the kerb was the arc to the south-west. The tallest of these was 1.7m anf the smallest opposeing stone to the north-east was 0.5m high. All of these stones were conglomerates which could have been obtained from withing a short distance on the site. None of the stones wereplaced in stone holes. Soil sample analysis from samples below the stones indicated an initial clearance of the site followed by cultivation over a considerable period of times prior to the contruction of the kerb.
The cairn was not found to have been spread evenly within the area deliniated by the kerb, but formed a number of discrete concentrations, 0.4m thick at most. The largest concentration was to the centre, overlying the post setting of the rectangular building. There were four other smaller contentrations within the kerb and a the fifth a bank of cobbles built against the outer western section of the kerb. The pattern is difficult to explain though robbing, and it is unlikely that the area was originally covered by a single substantial cairn. On the existing evidence it would appear that that the kerb enclosed a platform-like cairn similar to those enclosed by recumbent stone circle to the south-east. Within the circle was a general scatter os fragmented calcined bone, with the largest concentration beneath the central cairn or platform. <1>

The site and the excavated sequence is further discussed by Richard Bradley in his 2000 publication. He discusses two interpretations of the sequence; either the the rectangular building was decayed or demolished and replaced with the circular central cairn, with the kerb constructed later to enclose this and remaining in use as a cemetery for a considerable period of time, or the rectangular building was enclosed by the kerb while it was still standing or as it decayed, with the central cairn added later, when this building was lost, with the site afterwards used a cemetery. In either interpretation, there appears to be a signifiant relationshiop between the rectangular building at the later kerb cairn, as the central cairn overlays the building exactly and the kerb was constructed around the same central point. Bradley also highlights that the axis of the site also changes by the construction of these monuments, significant because the monument associated with the dead was set out on the opposite axis to the building, possibly a house, which would have been occupied by the living. <2>

A radiocarbon date from human creamed bone from with a cordoned urn in pit 30 was obtained and published in 2003 as part of the National Museums of Scotland Dating Cremated Bones Project. This indicated a Early Bronze Age date. <3>

See link below to published PSAS article for full discussion of the site and its radiocarbon dates.