Class I symbol stone, depicting a bull, similar to those on the Burghead stones. 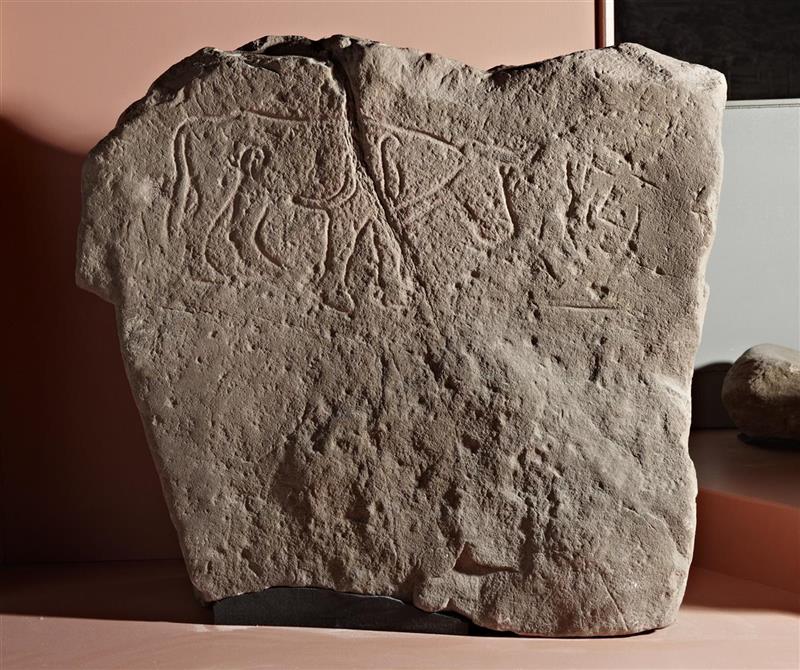 (Also information from the Highland News and Football Times, 3 August 1979.)

Now at Stoneyfield House in the possession of Mrs Torrance.
RCAHMS 1985. <2>

The stone is now the legal property of Mrs Torrance, due to a 20 year lapse in claiming through the Treasure Trove process. Viewing can be arranged. The property is for sale and Inverness Museum and Art Gallery are consulting with Mrs Torrance over the future of the stone. It is hoped that a drawing of the stone can be made, through Ian Fisher, RCAHMS. <4>

Included in a catalogue of the Pictish Symbol Stones at Inverness Museum & Art Gallery, original version 1994, updated 2010. This stone is currently (2010-2011) on loan to Inverness Museum. <5>

Inverness 2, Lochardill, Inverness-shire, Pictish symbol stone
Measurements:
Stone type: sandstone
Place of discovery: NH 665 438
Present location: Inverness Museum & Art Gallery
Evidence for discovery: found in an old dyke in the later nineteenth century and taken to Lochardill House. It was later taken to Stonifield House, and presented to Inverness Museum around 2000. Mack discusses the original location of the two Inverness bull stones (2007, 174-5).
Present condition: fractured and worn.
Description:
The slab as it survives may be almost intact, with an incised bullock walking sedately to the right in the upper part of the stone. The animal is horned and has three spiral joints.
Date: seventh century.
References: ECMS pt 3, 103; Mack 2007, 174-5; Fraser 2008, no 114.
Early Medieval Carved Stones Project, Compiled by A Ritchie 2017