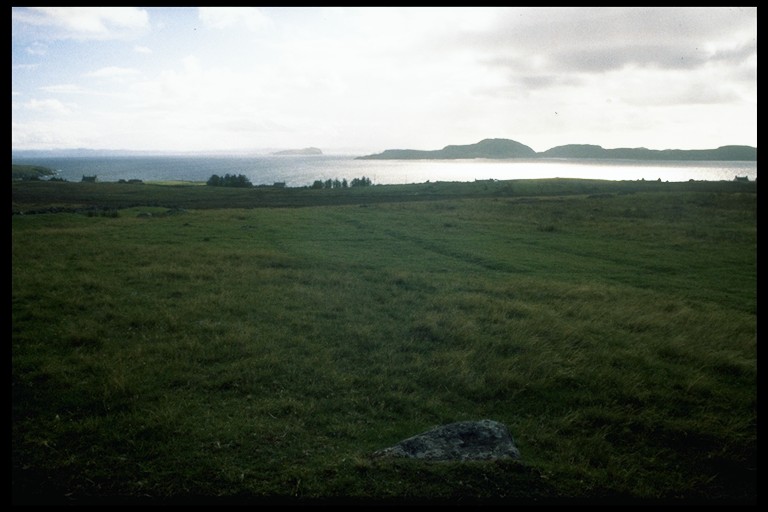 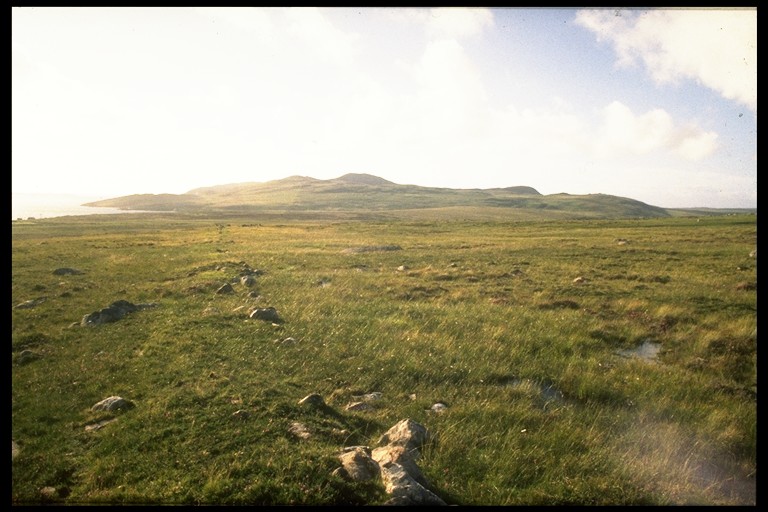 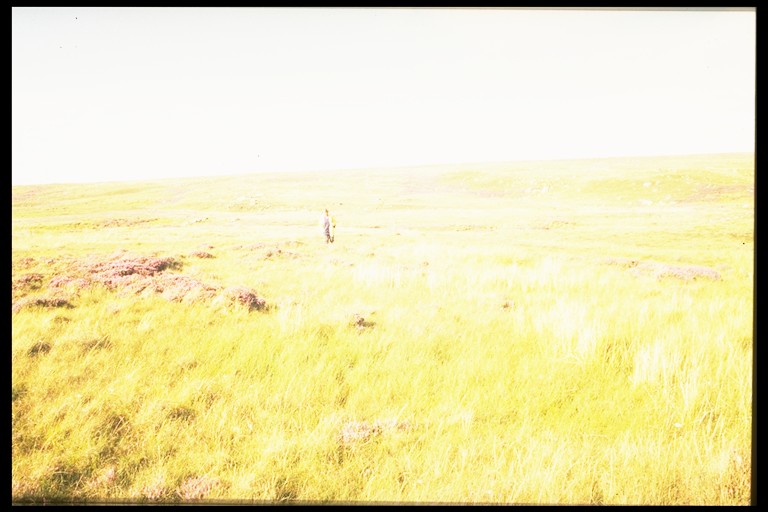 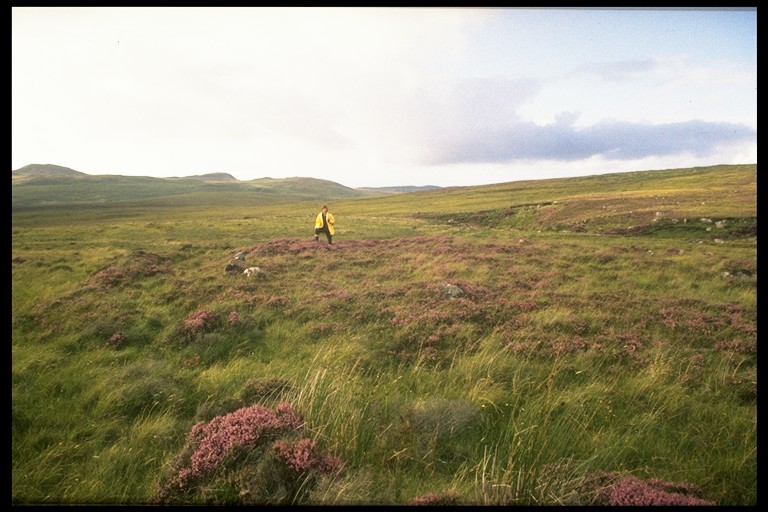 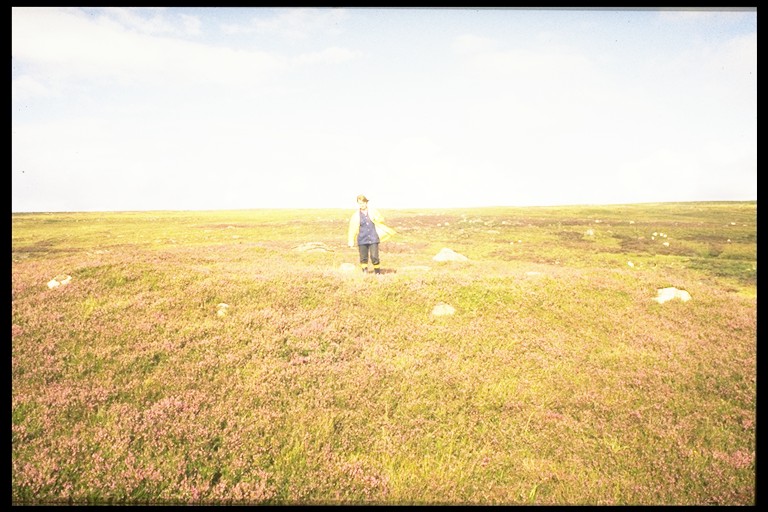 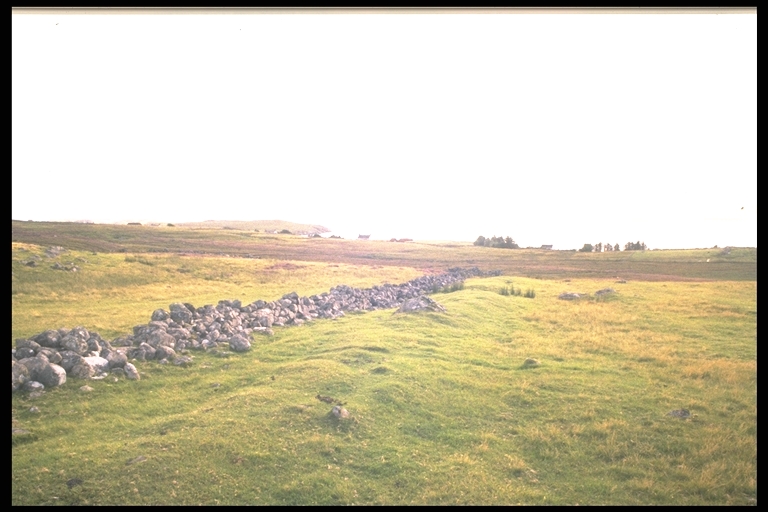 A circular stone-walled hut measuring 12.5m in diameter within a wall whose inner face of contiguous stones on edge is well defined. One or two stones possibly of the outer face, suggest a wall of 1.2m thickness. The hut is bisected by the footings of a later wall crossing from N to S and the N arc has been further mutilated by excavations for a water tank just outside it. The entrance is not evident.
Resurveyed at 1/2500.
Visited by OS (F R H) 22 June 1962 and (J M) 16 July 1974.

(Formerly NC00NW 8 0295 0874)
At NC 0295 0874 are the remains of a circular structure, 13.5m in diameter, found under a depth of peat about 40 years ago.
On a quite flat part of a generally marshy area, it consists of a foundation wall, 1.0m thick and 0.2m high with a possible narrow entrance in the SE.
This feature is probably a large hut circle similar to others in the area. The walling is rather narrower than usual but this may be due to the fact that the lower, wider part of the wall is still under the peat. Visited by OS (F R H) 31 May 1962.

(Formerly NC00NW 13 0269 0901)
At NC 0269 0901 is a near circular stone-walled enclosure measuring overall 17.0m ESE-WNW by 15.0m. The outer wall face of contiguous stons on edge is visible for much of the periphery and one or two possible inner facing stones suggest a wall thickness of 1.2m. The entrance in the ESE is mutilated. Inside the enclosure in the W and immediately outside it in the NW are two small later ruinous constructions. It is possible that this is a large hut circle though it is unusual when compared with the other huts in the area.
Surveyed at 1/10,000.
Visited by OS (J M) 16 July 1974.

(Formerly NC00NW 16 031 085)
In the area centred on NC 031 085 is a settlement of 4 hut circles ('A'-'D').
'A' measures 8.0m in diameter between the centres of a wall just protruding through the peat, with an ill- defined entrance in the ESE. 'B' measures 9.0m in diameter between the centres of a wall, almost obliterated by peat in the S, and visible as a band of rubble elsewhere. A slight gap in the E may be the entrance.
'C', almost obscured by peat, measures 8.5m in diameter between wall centres. Entrance not evident.
'D' is a level platform circa 11.5m in diameter which is probably a totally overgrown hut circle.
Except to the S and SW of 'B' where there are a few stone clearance heaps and traces of ruinous walls, there is no evidence of contemporary cultivation.
Visited by OS (J M) 16 July 1974.

(Formerly NC00NW 21 027 091)
'Between the hut circle complex (NC00NW 2) and a more wide-spread group (NC00NW 14) is another complex not unlike NC00NW 2. It consists of a series of what may be 3 hut platforms and a more obvious hut circle lying within a complex of field walls and clearance heaps which may have been recorded by the OS as part of the NW end of NC00NW 14. It appears to be overlain on its downhill side by a dyke which runs straight for some distance across the hillside, and whose date is impossible to determine. Site not accurately located at time of visit.
Visited by R Gourlay (Highland Region Archaeologist), 24 August 1988.

In the rough ground surrounding a post-medieval enclosure on the ridge, which is known as Bad a' Chotair, there are nine hut-circles which have previously been described under NC00NW 8, 9, 13, 14, 15 and 16. Four measure about 12m in internal diameter, one is 9.2m, and the remaining four are about 7.5m; all are surrounded by banks up to 1.5m in breadth and, where visible, the entrances lie on the S or SE. Two (ACHIL94 362, 378) have baffle walls at the entrance. What may have been other hut-circles, identified by the OS (NC00NW 16 B and D), were not located on the date of visit whilst a third (NC00NW 14 B) is no more than a small enclosure.
Juxtaposed, but not necessarily associated, with the hut-circles, there are numerous stretches of stony field banks and small cairns. The banks occasionally form enclosures or fields but are often little more than linear clearance heaps. The banks to the N of Bad a' Chotair were previously described under NC00NW 21.