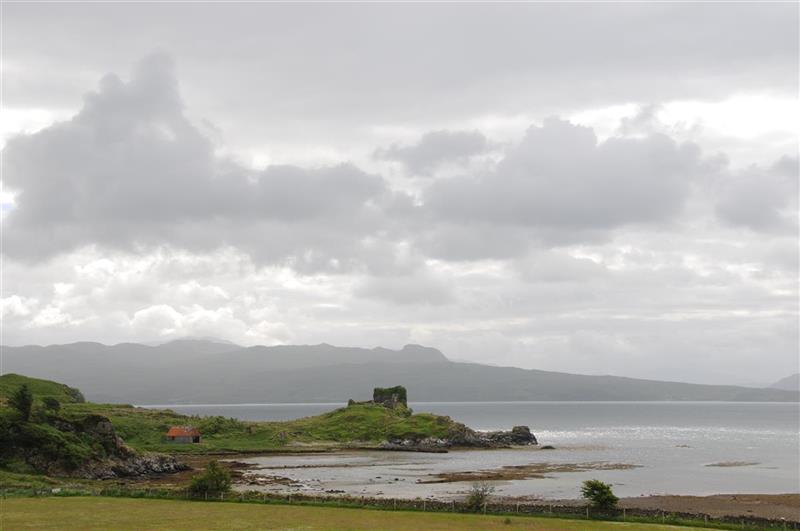 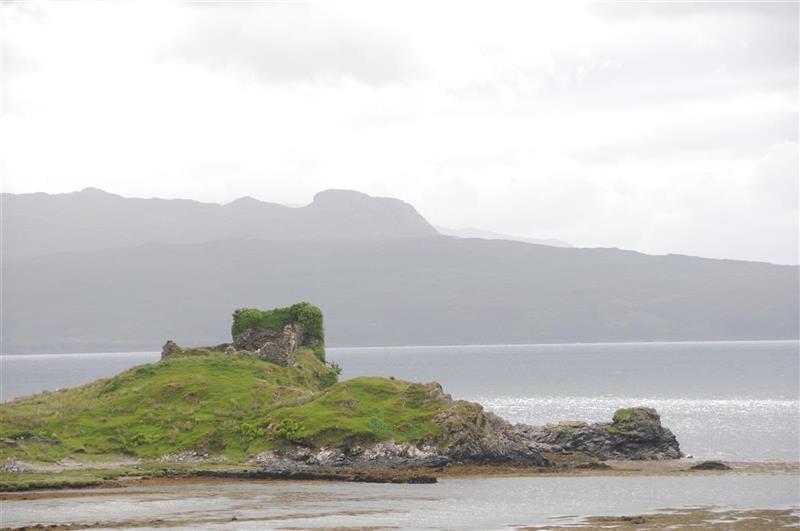 Knock Castle ... is easily approached from the landward and, so far as can be seen, has comprised a main block with a (later?) range of building projecting at right angles, probably forming sides of a courtyard.
The main walling, averaging 4ft 3ins in thickness, forms the most southerly angle on plan and stands to a height of over 30ft. Built of rough rubble the interior face is much decayed and broken away, and the only opening discernible is a small window at present ground level in the SE. wall. Traces of foundations show these walls to have enclosed an area of about 55ft by 26ft wide. An entrance 3ft 2ins wide, in the SW angle of the building, probably dates from the later addition, which is 49ft long and has contained two storeys. Very little can be followed without excavation, but the buildings appear to date from the 16th century.
This is the place known of old as Castle Camuys or Camys. Monro thus spears of it as 'the Castill of Camus in Sleit, pertaining to Donald Gromsone'. In 1614 there is a confirmation of lands to Donald Gorm of Sleat ('Slait') with the proviso that 'the castle of Camus' should always be open to the King, his lieutenants, chamberlains, etc (Information from Reg Magni Sig Reg Scot, No. 1087).
RCAHMS 1928.

The last documentary evidence of life in the Castle is on 31st August 1632, when McConnillreich signed a bond there declaring Sir Donald MacDonald to be his Chief.
The actual date when the Castle ceased to be a residence or Clan stronghold has not been traced, but no doubt, the walls of the building provided material from which the house of Knock was built, and we find that quite a number of Estate documents were signed at Knock during the early years of the 18th century.
J MacIntrye 1938.

The site of Dun Horavaig is now occupied by the ruins of Knock Castle, all traces of the dun having been obliterated. It is also known locally as Dun-Iain-Choinnich.
RCAHMS 1928.

Knock Castle described by RCAHMS. In poor condition. Further remains of turf-covered foundations indicate a range of buildings enclosing the courtyard on the NW side nearly parallel with the main block. There are also traces of a long narrow building at a lower level at the NE end of the main block. The head of the gully on the SW side of the Castle has been skirted by a stone wall, of which turf covered foundations remain.
Visited by OS (A S P) 17 June 1961.