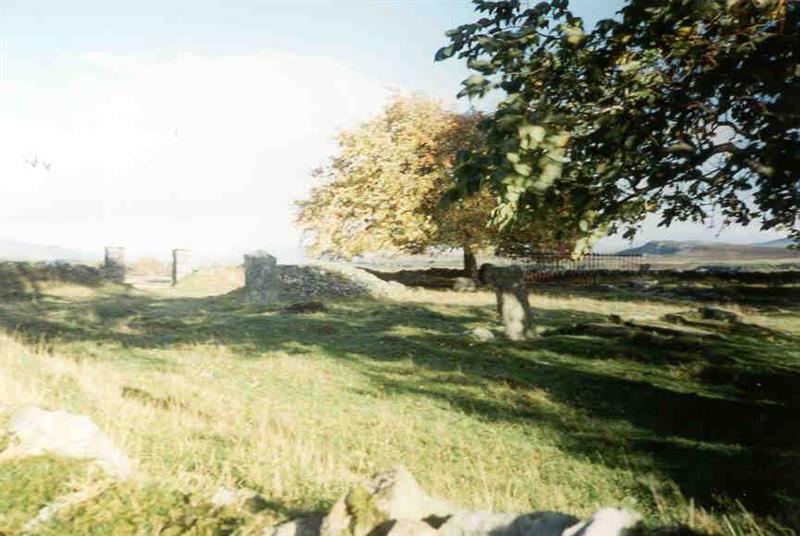 View of graveyard. © The Highland Council 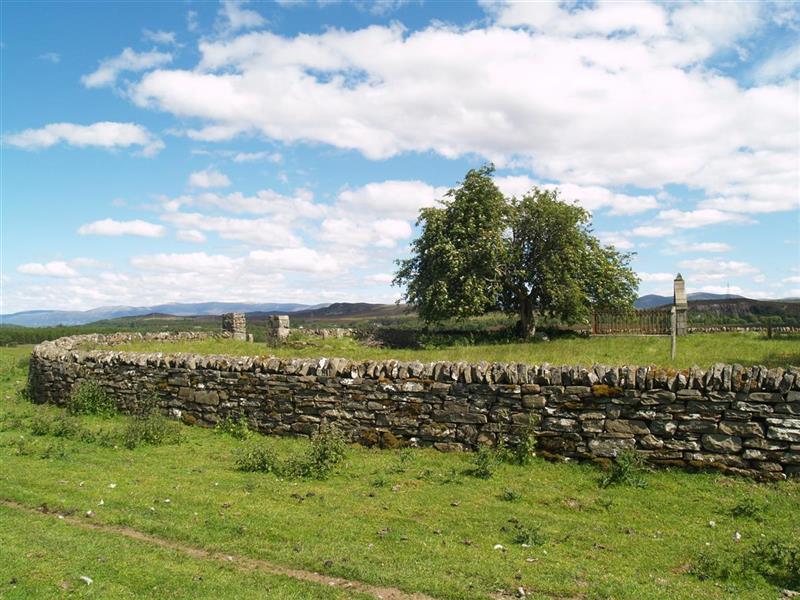 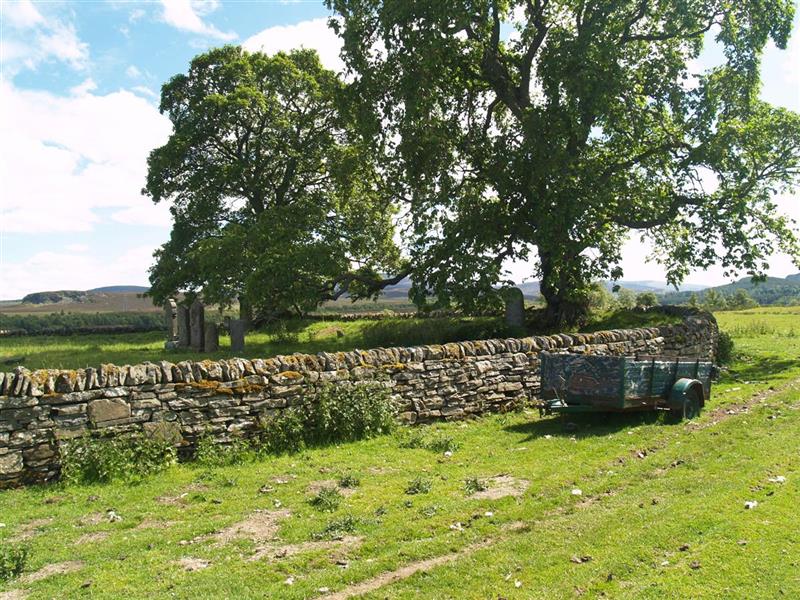 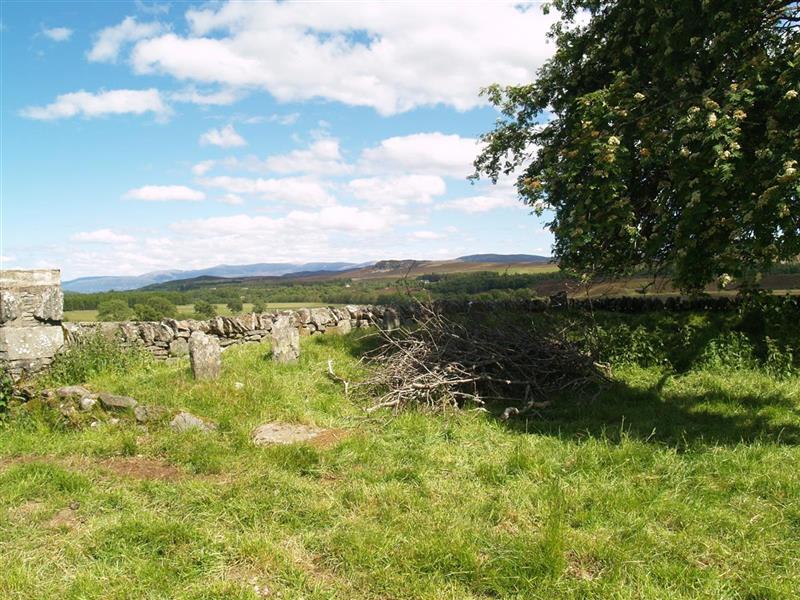 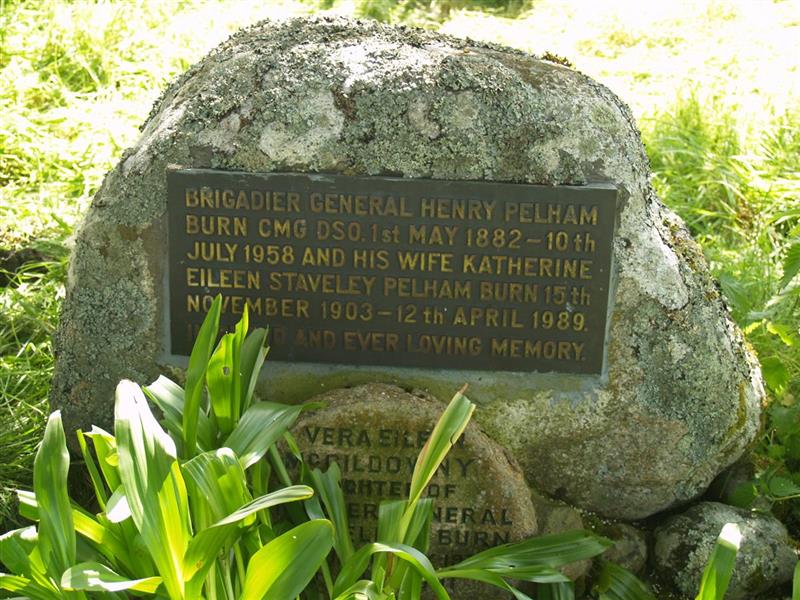 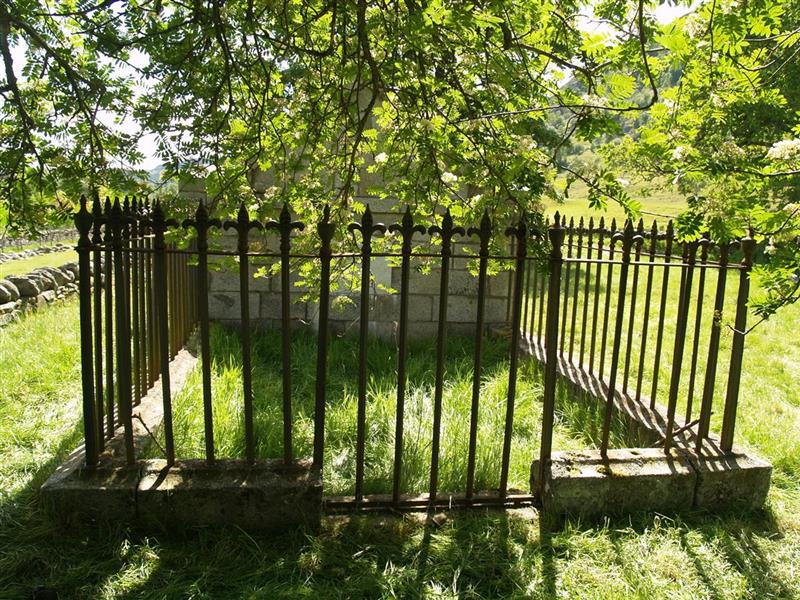 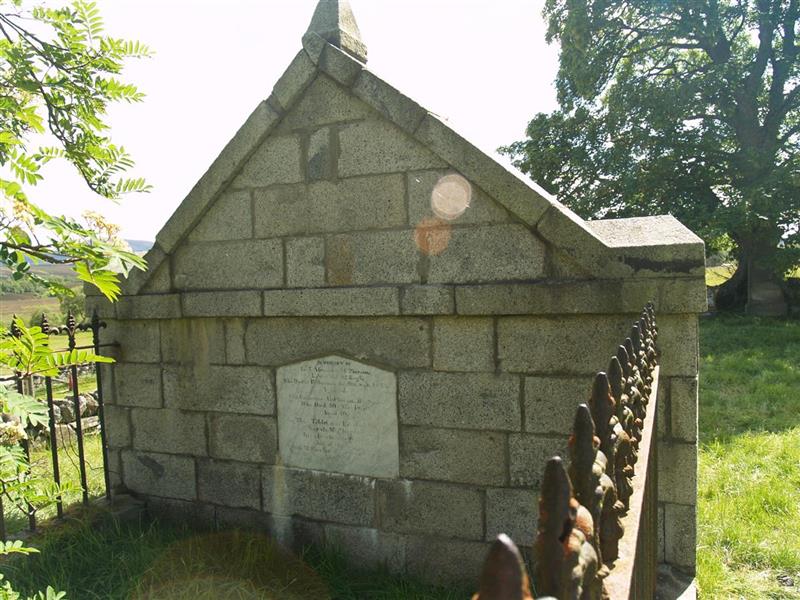 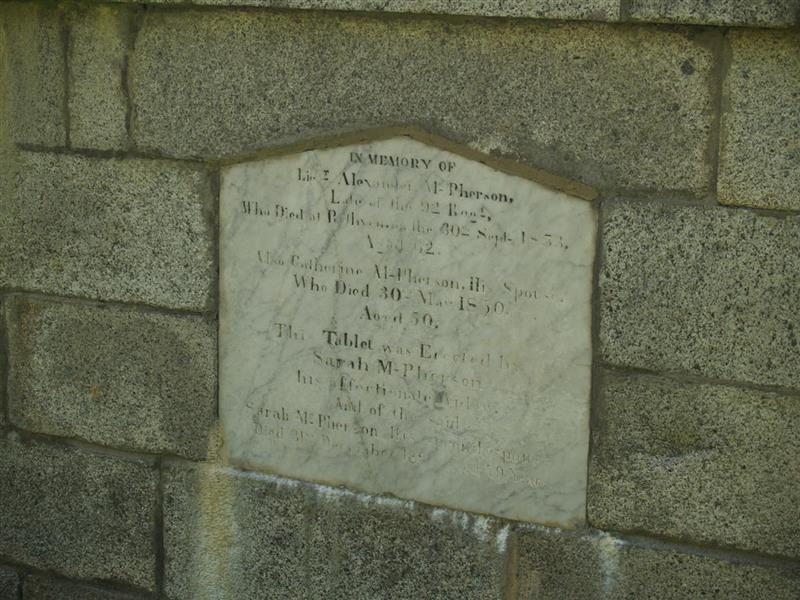 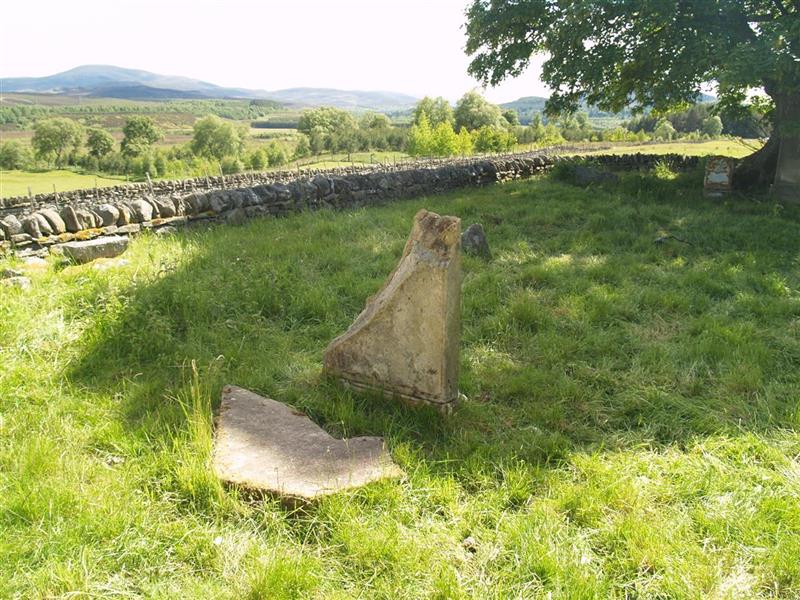 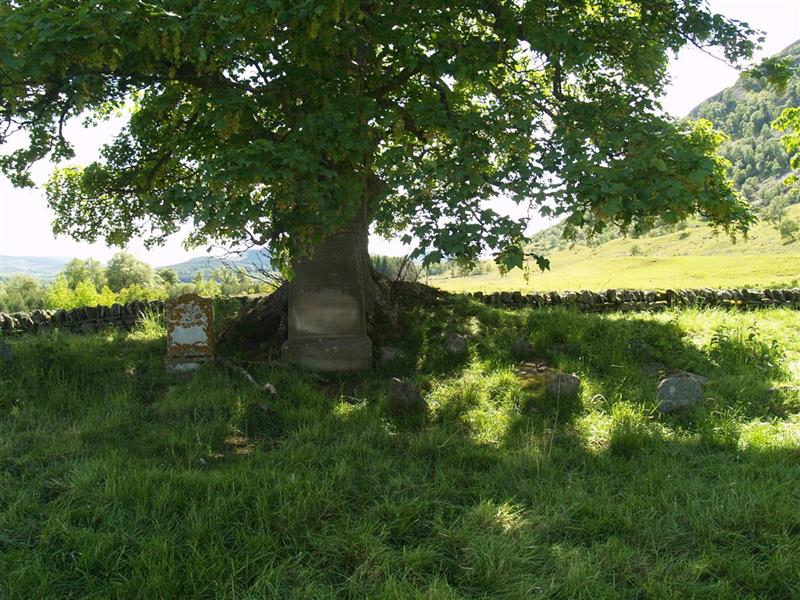 'Speyside Monumental Inscriptions', pre 1855
Monumental inscription survey completed by Alison Mitchell. The survey may not include inscription information after 1855 and each inscription transcribed does not give the full details that appear on the stones, abbreviations used. Some ommissions and inacuraciesmay be encountered. First published 1975, reprinted 1992. In poor condition when last visited.
J Aitken : 20/12/02
-----

St. Peter's Chapel was pulled down circa 1850. No trace of it can now be seen, but the site is reputed to be under one of the walls of the present graveyard, which is still in use. The name Cladh Eadail is not known locally but the names "Cladh Bhaillaid" and "Cladh Phadruig" are still in use (Information from Captain J H Macpherson, Dunmore, Newtonmore, Inverness-shire).
Visited by OS (R D) 29 September 1965.

The following report contains an assessment of the current state of Cladh Phadraig cemetery, and archaeological recommendations for any future conservation.

LOCATION
The cemetery is located south west of Newtonmore, at NN 691 971. It is situated on a rise in a field of pastureland, some 30 yards from the A86 road.

SITE HISTORY
The site is recorded within the Highland Council Sites and Monuments record as:-
NN 691971) Cladh Eadail (St. Peter's ?) churchyard at Beallid; also called Cladh Bhaillaid. A chapel existed here at one time. A Macbain 1891.

St. Peter's Chapel was pulled down circa 1850. No trace of it can now be seen, but the site is reputed to be under one of the walls of the present graveyard, which is still in use. The name Cladh Eadail is not known locally but the names "Cladh Bhaillaid" and "Cladh Phadruig" are still in use (Information from Captain J H Macpherson, Dunmore,Newtonmore,Inverness-shire). Visited by OS (R D) 29 September 1965.

Information from Sir Thomas Macpherson indicates that it is likely to be the oldest cemetry in the immediate area, and that it mainly served the Macpherson and MacIntyre families.

The family now wish to restore the site, with I understand, a three phase programme. Phase 1: Restoration/rebuilding of the drystone wall around the site.
Phase 2: Lifting, cleaning, cataloguing, and reinstatement of fallen tombstones
Phase 3: Establishing the foundation walls of the old chapel, and a potential rebuilding of the chapel

Sir Thomas Macpherson indicates that the site has been identified as a place worth upgrading for public viewing. I understand from Lady Jean that this was a survey undertaken by a whisky company. The recent Access to Archaeology audit completed for the Badenoch and Strathspey area specifically assessed this site, along with many others in the area. On the completion of this survey the site was not assessed as one of those most suitable for increased public access and interpretation in the Badenoch and Strathspey Area.


CURRENT CONDITION
The cemetery is bounded on all sides by a drystone dyke which requires substantial repair/rebuilding. The gate into the cemetery, whilst in good repair, is unable to shut properly. Within the cemetery around 3 large trees have grown, and the roots of two of these are causing substantial damage to the wall, and some gravestones. The wall affected by these roots might be best rebuilt two or three feet outwith its current location so that further damage does not occur. The wall currently stands between approximately 4 and 7 feet in height when viewed from the outside. Within the cemetery walls, the ground is level with the top of the wall. The resulting void will, therefore, need to be infilled to prevent slippage of the soil within the graveyard. Immediately upon entering the cemetery lies a large pile of small stones, which I suspect have been removed from the graves when they were excavated. A number of more recent gravestones have broken and fallen. Older lairs appear to be represented by flat slabs on the ground surface, with a small marker stone at each end. Some of these flat slabs have been covered by turf over the years, others are visible. No inscriptions were immediately visible, but may well be present. There are the remains of a rectangular family enclosure, surrounded by railings on three sides, with the fourth presumably having been a granite wall which has collapsed in the relatively recent past. On the right hand side of the entrance, there is a relatively clear area, with no visible grave markers.

ARCHAEOLOGICAL RECOMMENDATIONS
Should any work be undertaken at this site, a work programme should be drawn up, and it must include the following archaeological elements. These must therefore be costed into any grant applications.

The recommendations given here are for the conservation and stabilisation of the cemetery “as is” rather than for the complete restoration of the cemetery to its original condition. It is considered that a complete restoration of this site would be out of keeping with the historic ambiance of the location, and it would not be ethically correct to restore such a site to its original state without evidence of what the original state was. In addition to this, it is likely that this site will have seen a long period of use, and therefore the site will have undergone many changes in its appearance over time. What we see now is just one window through time.

PHASE 1: An archaeologist must be present during the demolition of the current wall. The wall currently stands between approximately 4 and 7 feet in height when viewed from the outside. Within the cemetry walls, the ground is level with the top of the wall. This means that the wall demolition must be undertaken carefully, by hand, in case of either human remains or chapel foundations being present in the earth face immediately behind the wall. The archaeologist will then be able to record any items or features of archaeological interest thus uncovered.

PHASE 2: The lifting of fallen gravestones should obviously be undertaken with great care to avoid damaging the stones. The cleaning of the gravestones should be undertaken with nothing stronger than a soft brush and water. Whilst it is possible to use chemical strippers on such stones, the nature of the conservation work here would make this kind of work inappropriate in this situation.
A number of flat slab stones lie over lairs, and some are partially visible. These could be tidied up, with the grass and such like removed to allow full viewing of these stones. Some of these slabs have over time been engulfed by turf. Where this is the case the turf should not be removed, as this will encourage deterioration and weathering of the stones. In such cases, the archaeologist employed for Phase 1 could cut a section through the turf to determine the presence or absence of inscriptions, record any inscriptions, and relay the turf.

Recording of the inscriptions, and research into the history of the site should be undertaken, perhaps in conjunction with a local history group, and/or local schoolchildren. There are established best practice guidelines for such work, which should be followed whilst undertaking this work.

PHASE 3: This involves the attempt to establish the foundations of the reputed chapel. Geophysical survey does not involve any disturbance of the ground surface. This could be used around the outer perimeter of the graveyard to establish if the chapel extended beyond the current cemetery boundaries. It is extremely unlikely that geophysical survey would be useful within the cemetery, due to the disturbed nature of the ground.

Excavation within a graveyard to locate a building would require to be undertaken professionally and would prove to be an expensive exercise. Excavation, by its very nature destroys archaeological sites. It is also very costly, not only in terms of the time, but the post-excavation analysis, and is therefore a solution very rarely recommended by the Archaeology Unit.

The final stage of work was mentioned in conversation with Lady Jean. This is the erection of a replica chapel on the foundations of the original. This is not something that would be recommended within the cemetery. There is no reason however, why a replica could not be constructed outwith the cemetery. The problem with this is of course, that there are no records of the chapel, and any replica would be whimsical.

PUBLIC ACCESS
A large lay-by with space for around 7 cars is situated only a few yards from the cemetery. It is recommended that an interpretive panel is situated in the lay-by. This could be utilised to inform and educate both local people and tourists alike of the history of the site. It is generally accepted nowadays that interpretation should be off-site, so that the visitor can gain his or her own individual experience. This makes the lay-by the ideal location

OTHER
It would be prudent to consult the local Procurator Fiscal about the works being proposed here. It is possible that formal permission may be needed, due to the likelihood of human remains being disturbed. If work is undertaken here without the proper permissions, which disturbs human remains, then it is likely that it would be illegal in terms of civil law, and could also be in breach of criminal law. There could also be the question of “violation of sepulchre”. I cannot recommend strongly enough that should any work be undertaken, the Procurator Fiscal is consulted beforehand, along with Highland Council Protective Services staff.

Once this work has been carried out, it is important to ensure that the site becomes fully stock proof. At present, much of the ground surface is being badly eroded by animals, and this will of course, have a detrimental effect not only on the appearance of the site, but also in terms of the sites long term survival.