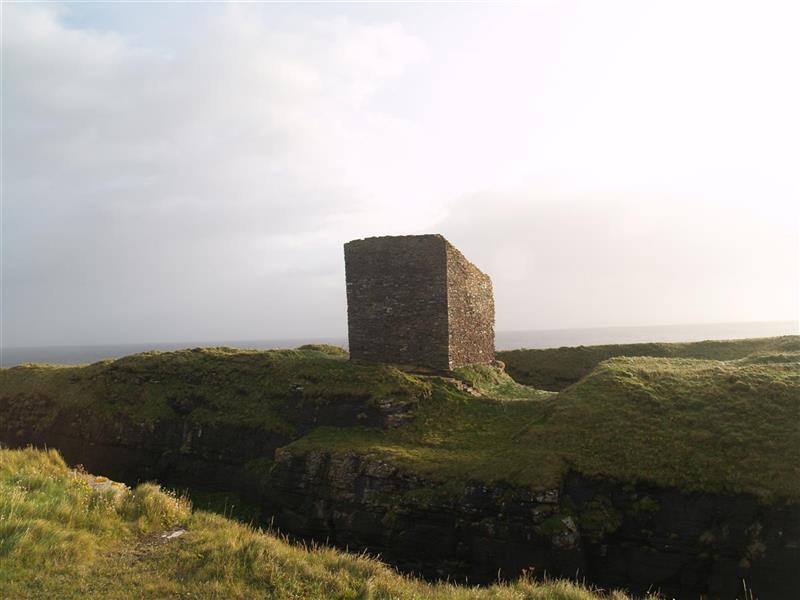 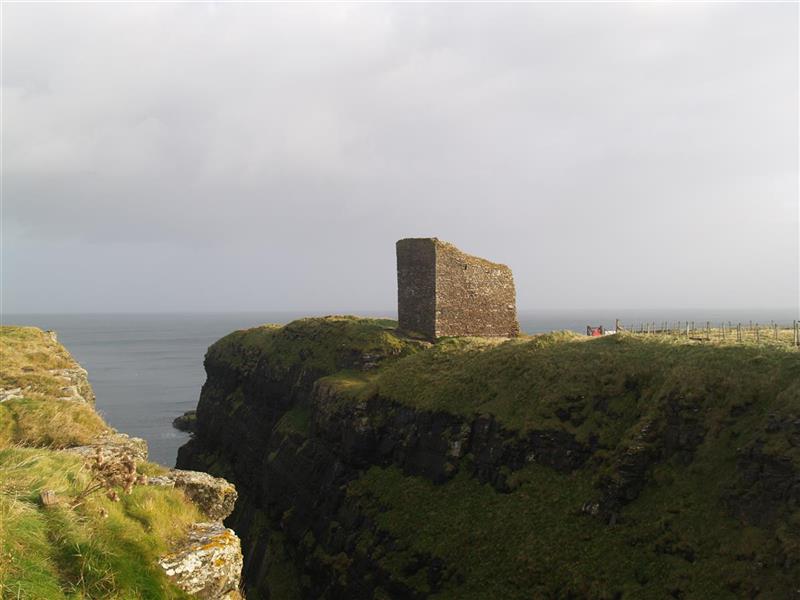 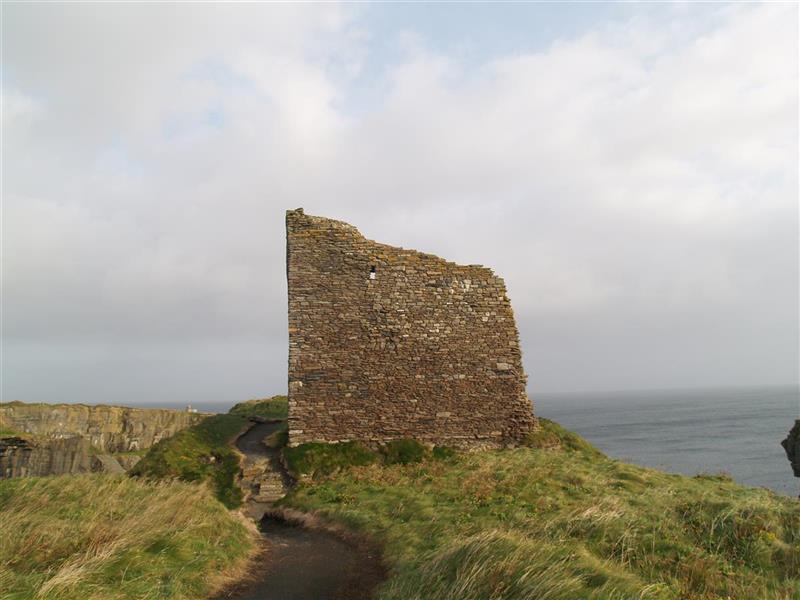 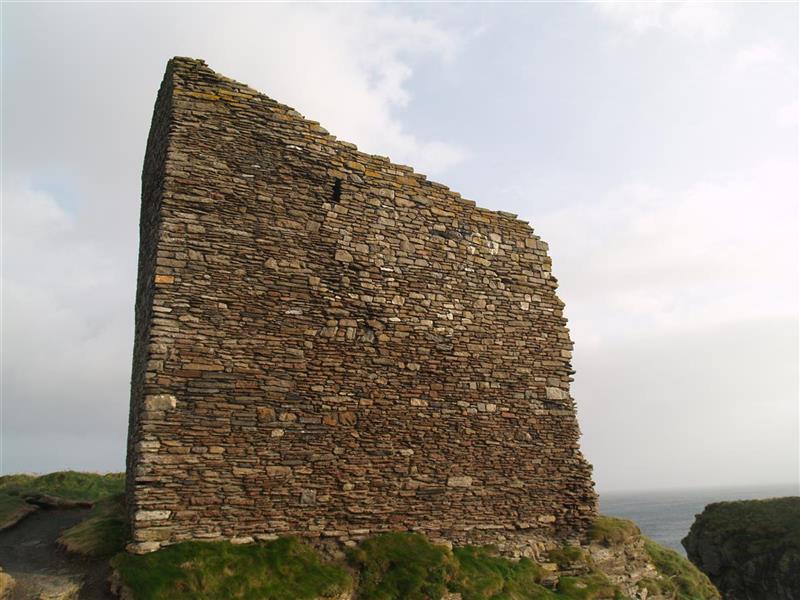 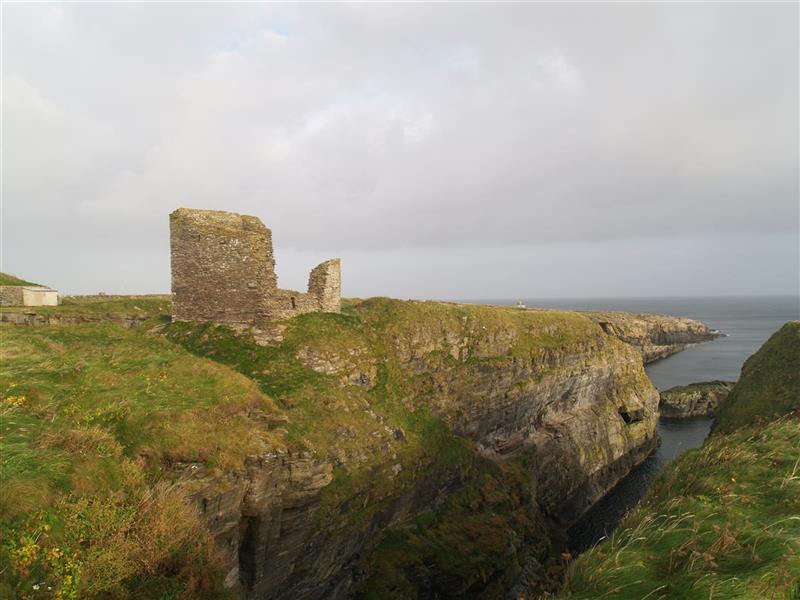 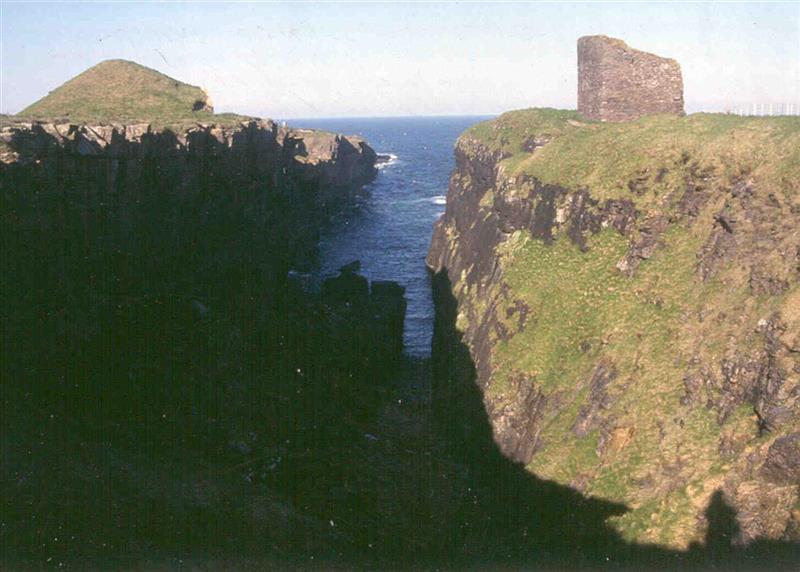 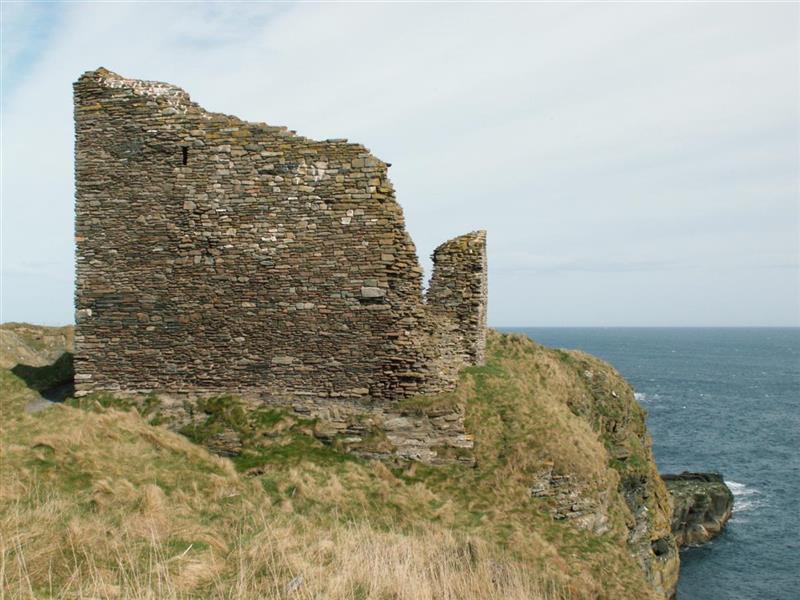 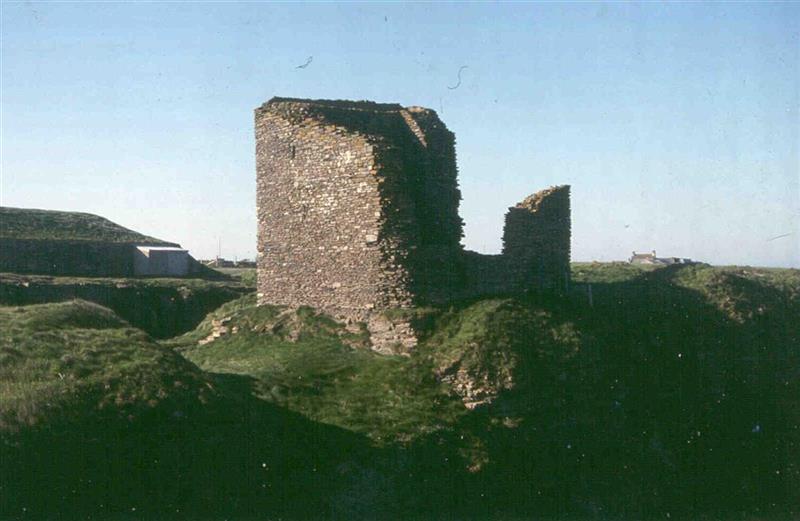 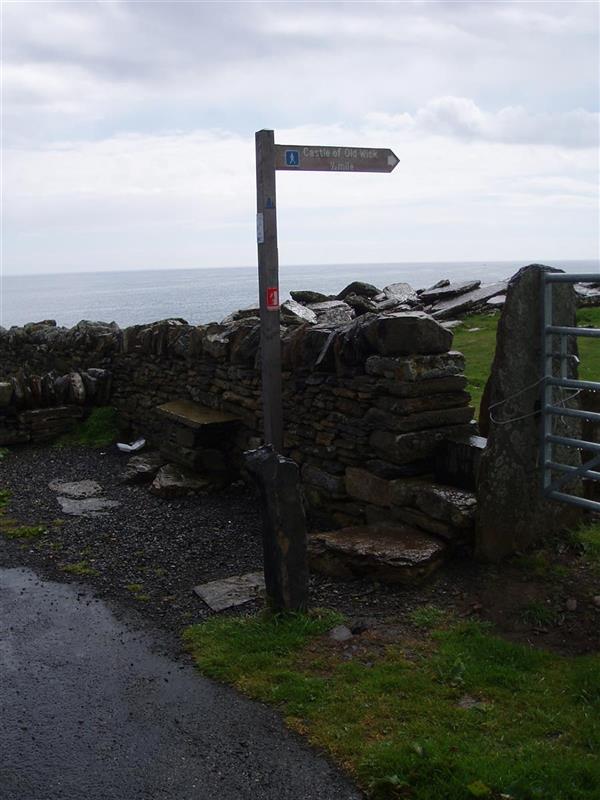 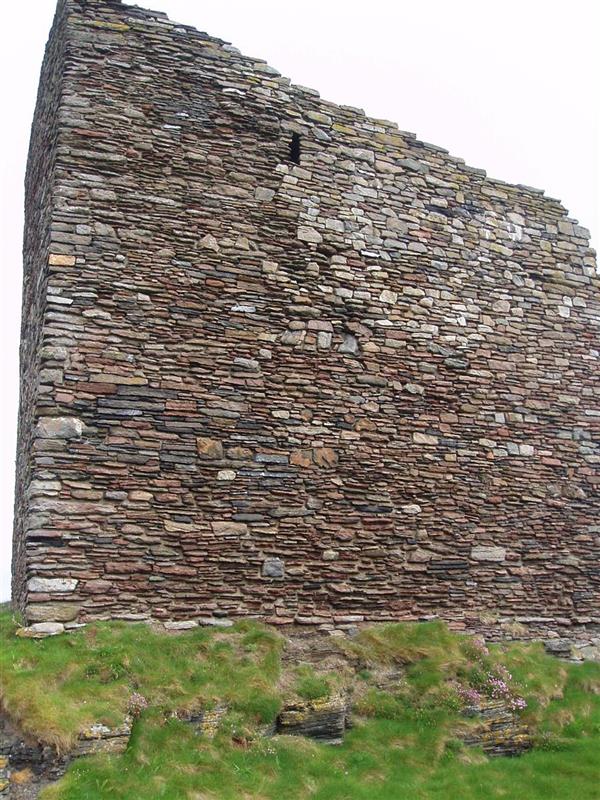 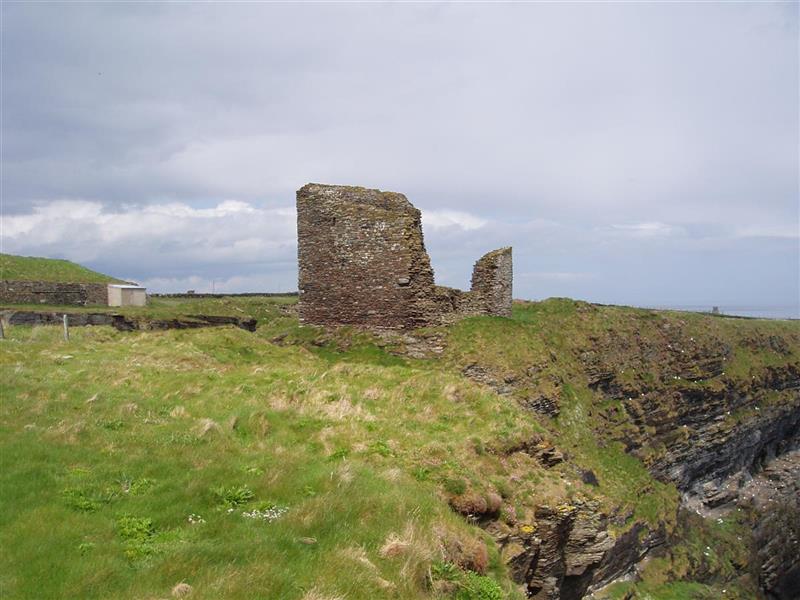 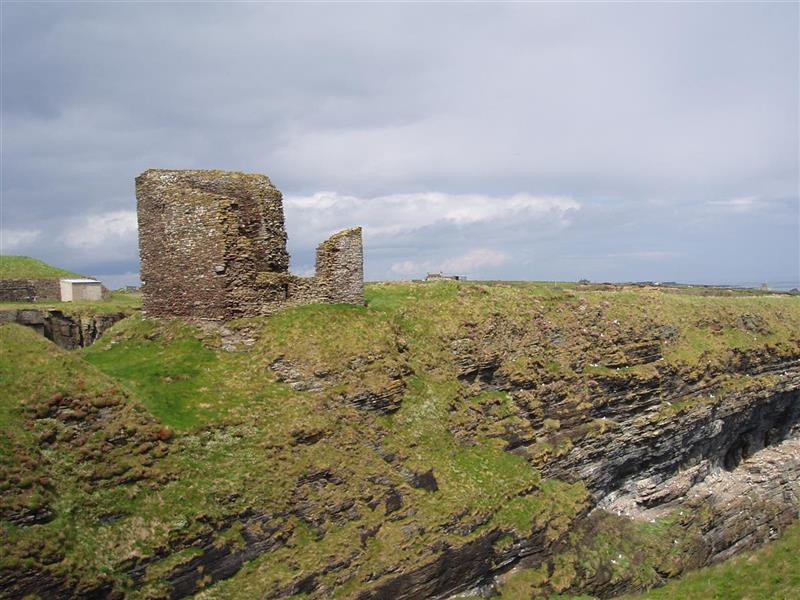 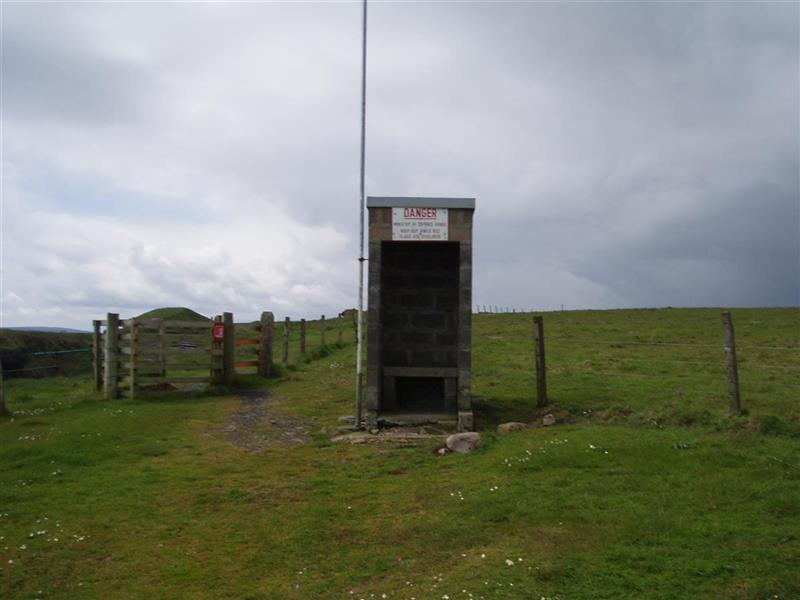 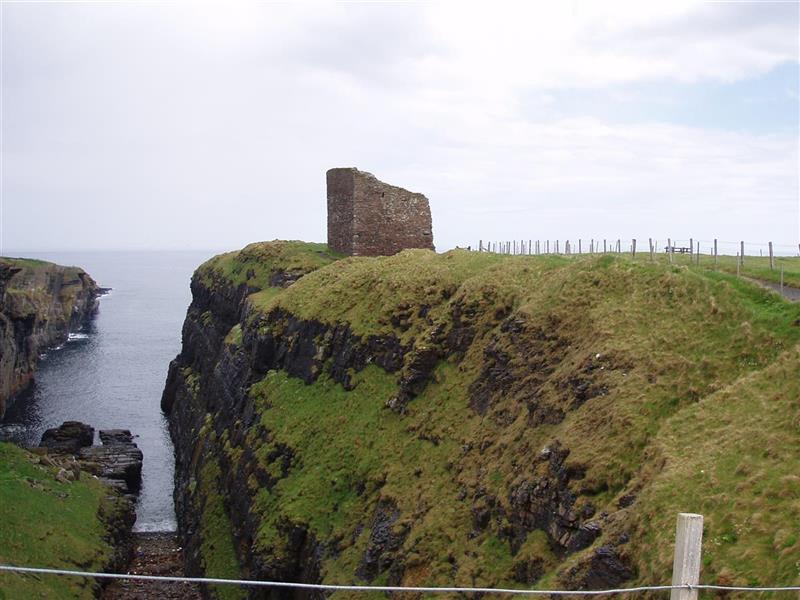 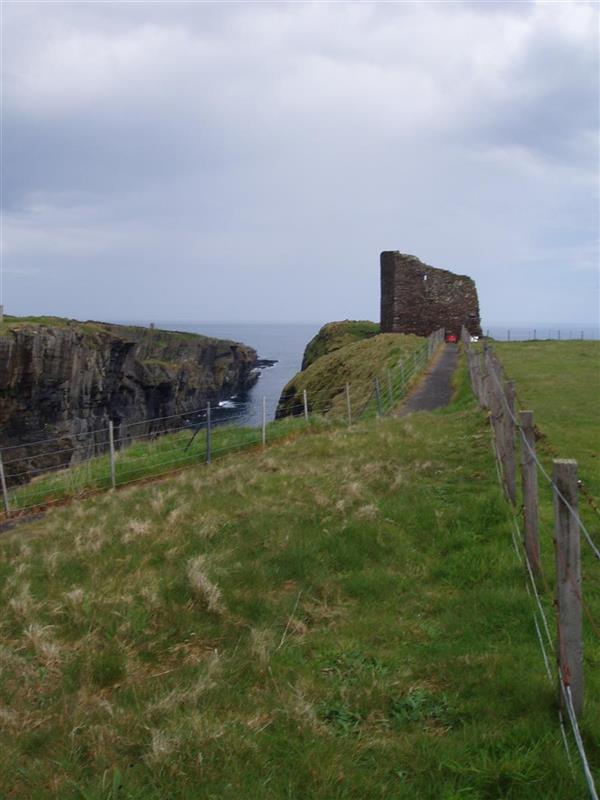 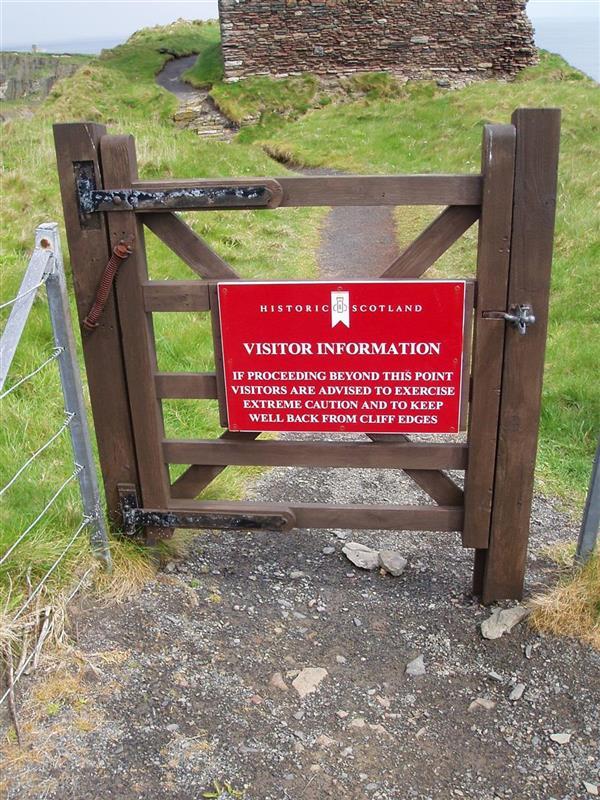 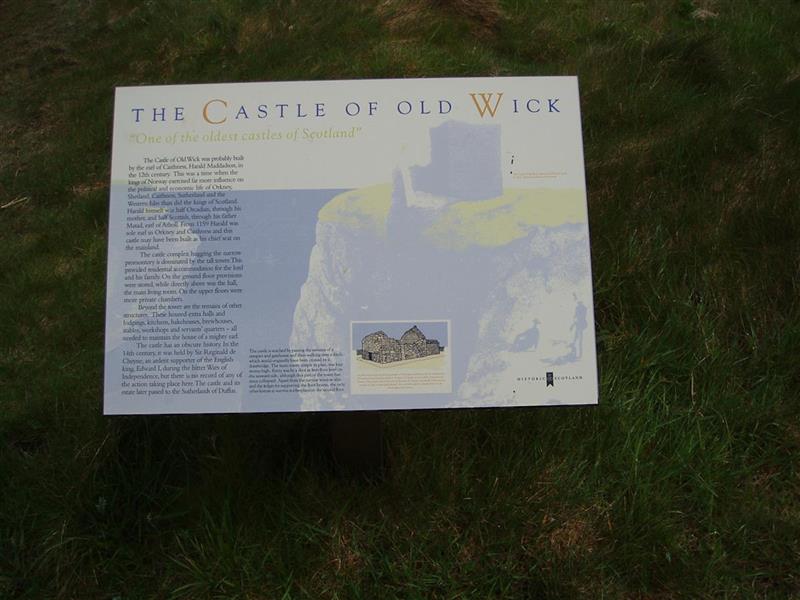 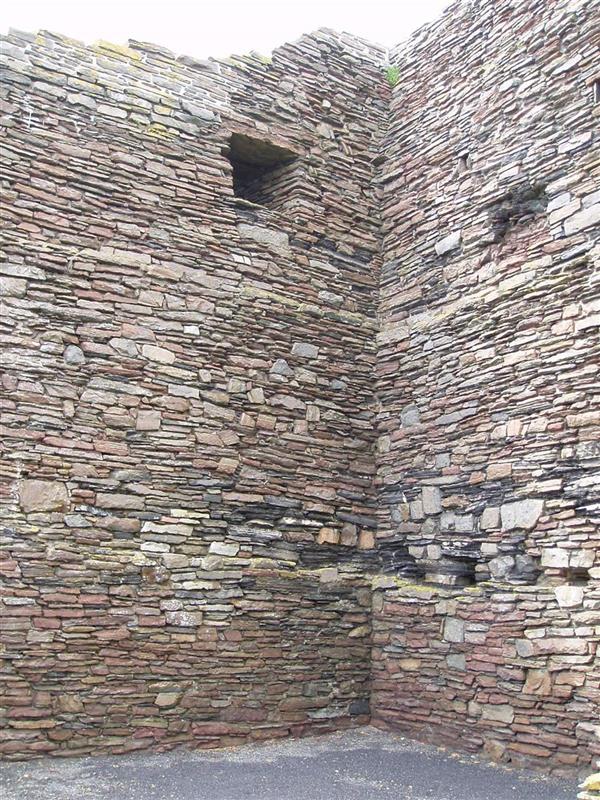 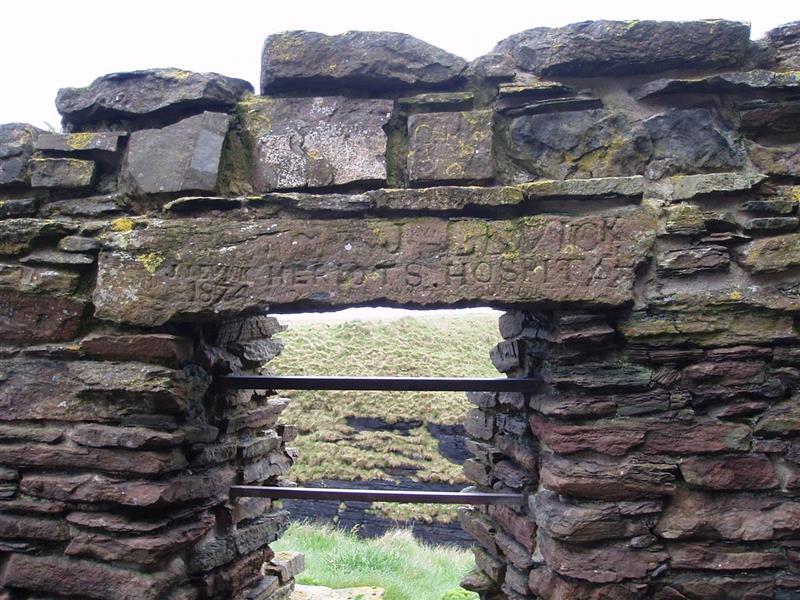 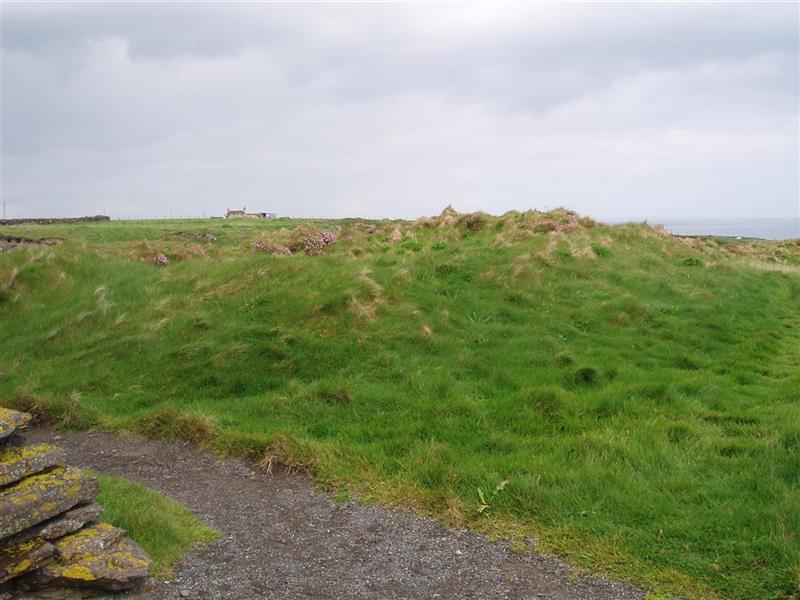 The Castle of Old Wick, by sailors called the Aul' Man o' Wick (NSA 1845) (but see ND34NE12) is a plain, rectangular keep set near landward end of 100 yds long narrow promontory; and is flanked by 100 ft high cliffs and fronted by a 'moat'. An outer rampart crosses landward end of promontory.
The keep stands to a height of 25-30 ft and measures 24 ft by 16 ft 3 ins within walls 7 ft thick. It has consisted of 3 storeys and a basement, all unvaulted; doorway has been in seaward-facing NE wall, probably at first floor level. Each floor has had a window in SE wall, and on second floor single aperture overlooks landward approach. In S corner wall is riven and bulging.
The low outer rampart has crossed promontory about 30 yds from keep. In rear of it, on either side of approach, is foundation of a small rectangular building.
The rock-cut 'moat', 30 ft wide and 10 ft deep, adjoins keep and may have been crossed by a drawbridge. It is known as "Lord Oliphant's Leap". To rear of keep 2 rows of building foundations flank a roadway, 174 ft long, running along centre of promontory to an open area, 70 ft by 47 ft, at the tip, which is said to have been the castle garden, and is now known as Castle Walk. The whole appears at one time to have been enclosed by a wall. Small portions of foundation can still be traced round cliff-top (Name Book 1872). Steps lead down to sea (NSA 1845).
Previously considered to be prob 14th century, keep is now ascribed to 12th century by both MacKie (E W MacKie 1975) and Lamb (R G Lamb 1980), latter comparing it with towers in Orkney and Scandinavia, a diagnostic feature being its standing to one side of approach rather than forming a gate-house as in later medieval castles. The first known owner of property was Reginald Cheyne in mid 14th century. Thereafter it passed by marriage to Sutherlands in14th century, then to Oliphants in 15th century. It came to Sinclairs in 1644, then to Lord Glenorchy, who sold it in 1690 to Dunbars of Hempriggs, with whom it remained in 1910.
NSA (C Thomson, written 1841) 1845; Name Book 1872; RCAHMS 1911, visited 1910; E W MacKie 1975; R G Lamb 1980.

'Castle of Old Wick' (SDD nameplate) is as described by previous authorities, and is now under guardianship. Steps lead seaward from Castle Walk, but sea is inaccessible. The name 'Old Man of Wick' published by OS is erroneous, and probably confused with an unlocated natural feature in the vicinity (see ND34NE 12).
Revised at 1:2500. Visited by OS (N K B) 17 January 1983.