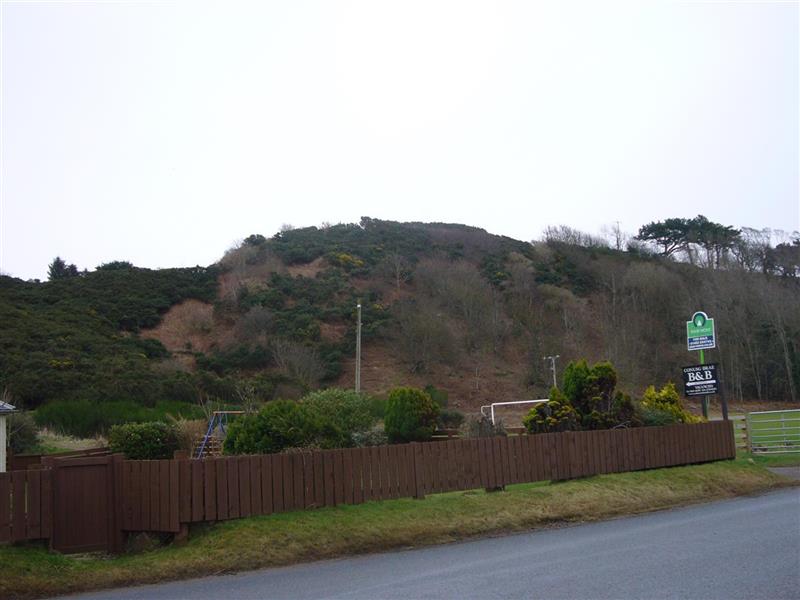 Cromal, or Tom Mhoit, corrupted into Cromwell's Mount, is circular, c. 20' high, with its top surrounded by a rampart aboug 5' high, and which is nearly straight on the W side. An earthen mound once formed a raised approach on the SE; on its removal a section of the rampart in the same arc was also destroyed but revealed a layer of small calcined, or decomposing, stones level with the interior area and exposed fragments of charred wood in the section of the rampart.
NSA 1845; T D Wallace 1888.

Cromall (popularly Cromwell's) Mount is a 'saucer-mote' with a mound of slight elevation and a diameter of 60', within a ditch and rampart. It may not have had a bailey - or this has disappeared.
W M Mackenzie 1927.

A brass pin from Cromwell's Fort, Ardersier, is listed (item no. 139) in an inventory of the Northern Institutions Museum, 1827. This pin may well have been lost between then and 1877, but could be in the present Inverness Museum. Donated by Sir T D Lauder.
J Barron 1915.

Cromal Mount, a possibly artificial, but more likely natural, sandy hillock on the brink of a raised beach. The sides have partly been scarped and the top levelled, and an earthen rampart (up to 4.0m wide and 1.0m maximum height) has been placed around the brink of the summit enclosing a roughly D-shaped area measuring 35.0m NNW-SSE by 25.0m. The original approach was probably in the E on the line of the modern approach, but quarrying here and in the S has destroyed the rampart and the entrance, and probably the alleged ditch. Some 20.0m E of the base of the hillock is an earthen embankment up to 10.0m wide and 2.5m high surmounted by a modern wall. It is uncertain if this is contemporary with the site or later. The summit of the mound has been mutilated by a concrete water tank.
The site appears to be medieval rather than pre-historic, and probably has been a motte.
Visited by OS (A A) 14 September 1973.

Cromal Mount was surveyed and three trenches cut to assess nature of any archaaeological deposits present. No archaeological features were found in the excavated trenches and it was concluded that the present appearance of the site, a well defined mound and bank is the product of quarrying for sand. The remains of a low bank which encloses the summit of the mound on two sides pre-dates the quarry but is of unknown date or purpose. The identification of the site as a motte cannot be confirmed. Sponsor: SDD HBM-AOC.
S Carter 1989.
NH75NE 2 7822 5556.

Historic Scotland proposes to revise the scheduling of this monument. <1>

The site was photographed by S Kruse during the ARCH Ardsersier and Hilton Local Heritage Project in 2013. <2>