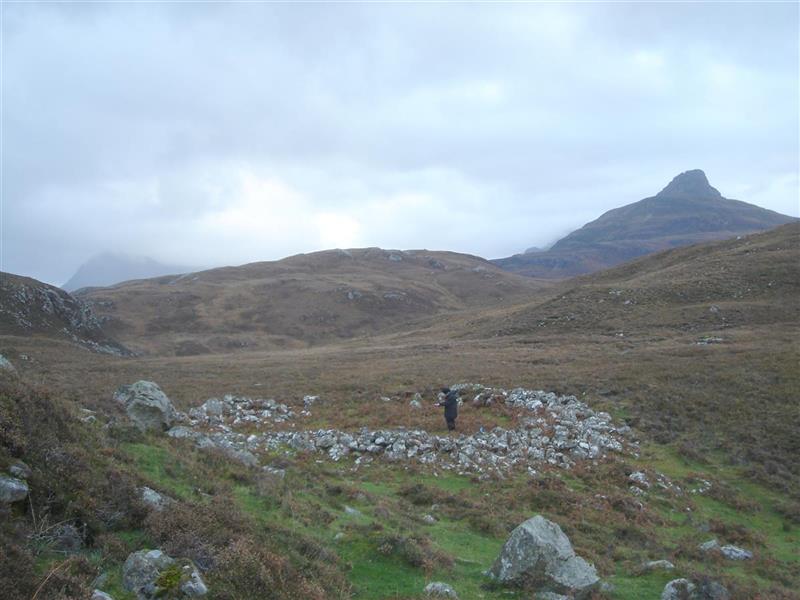 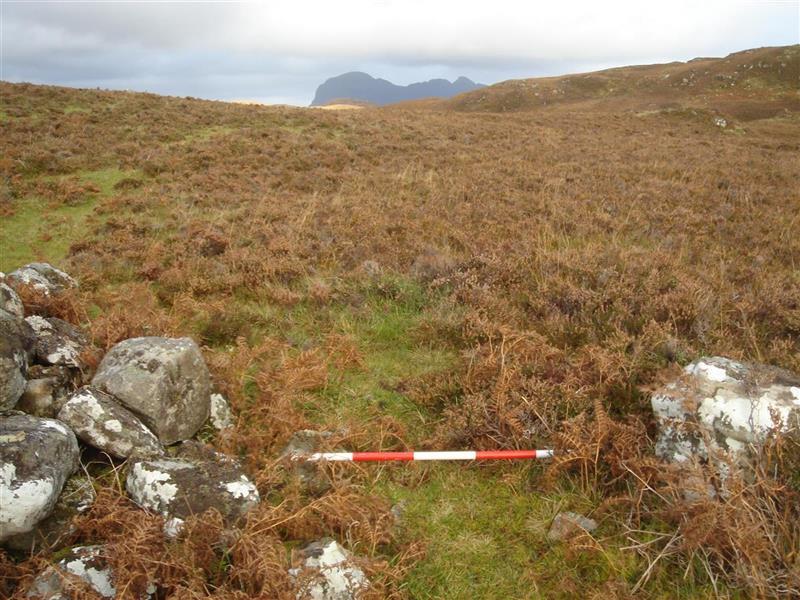 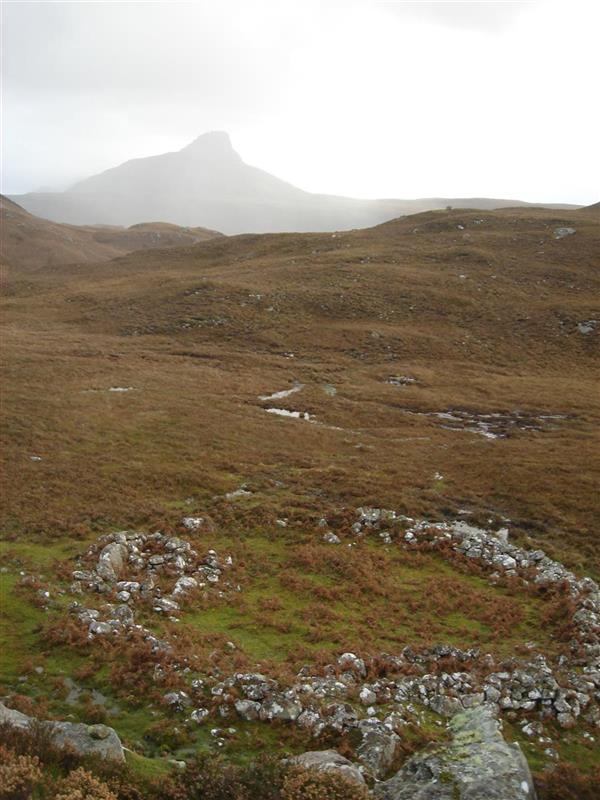 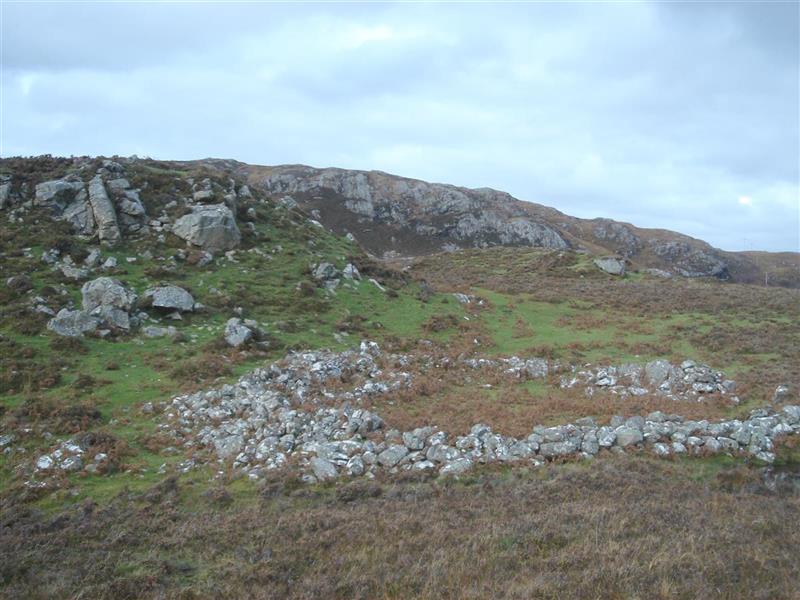 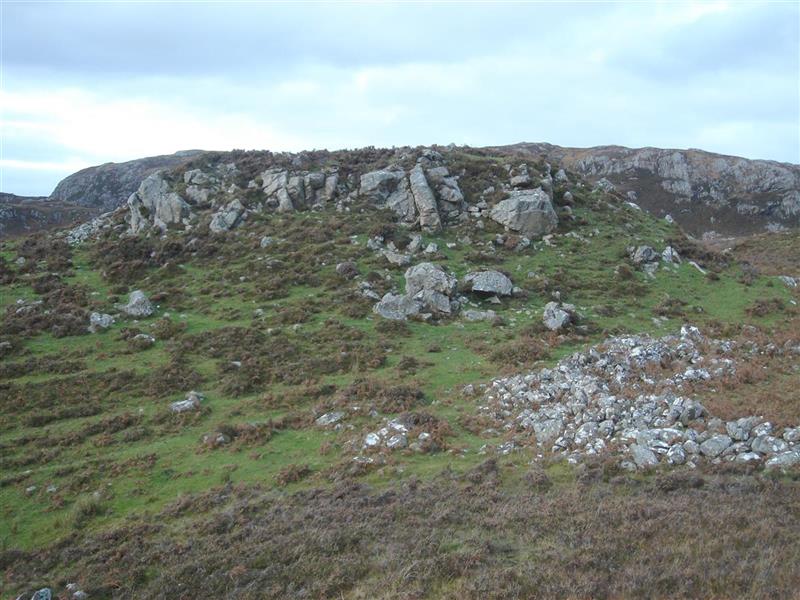 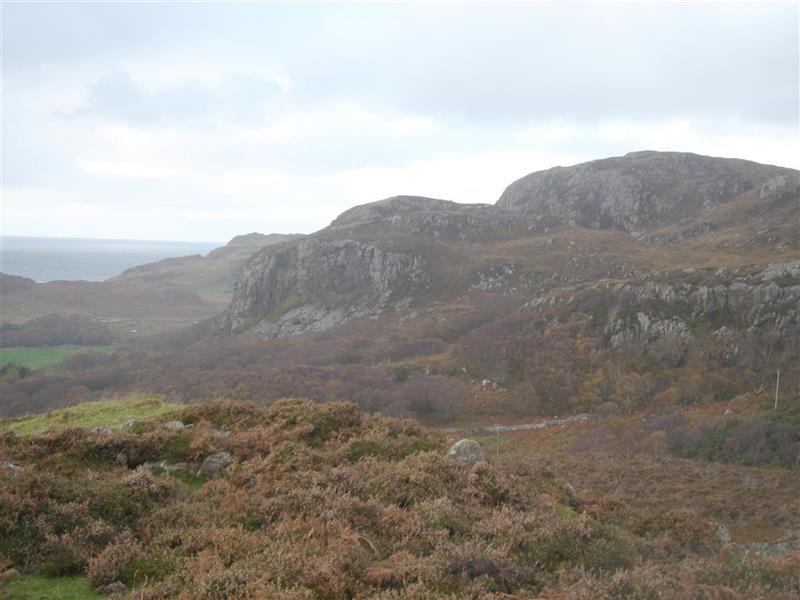 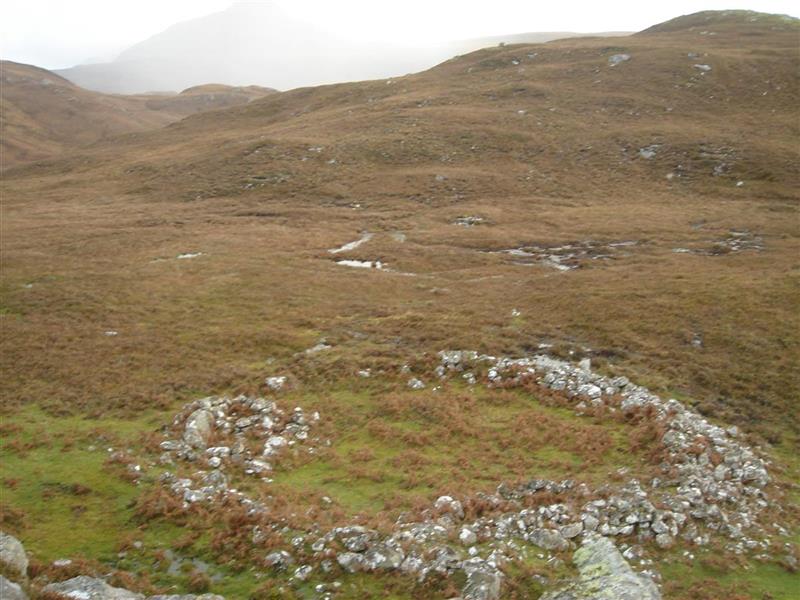 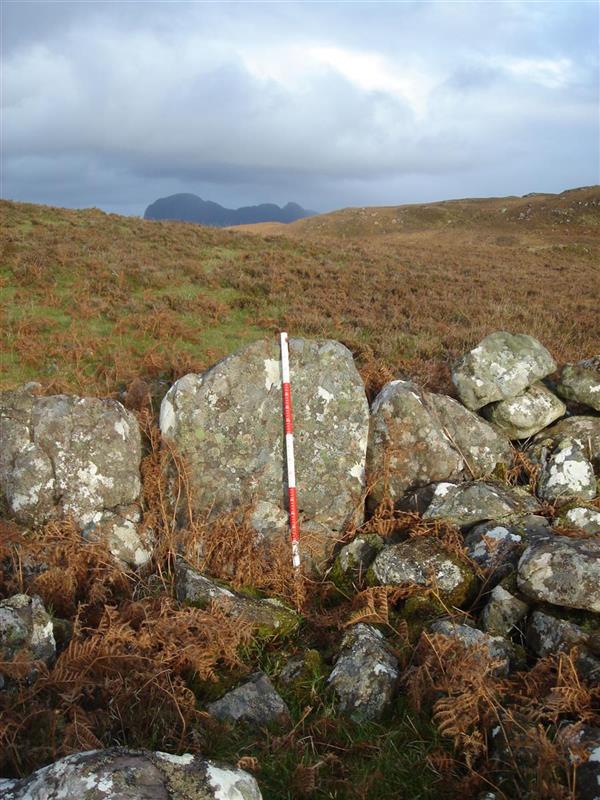 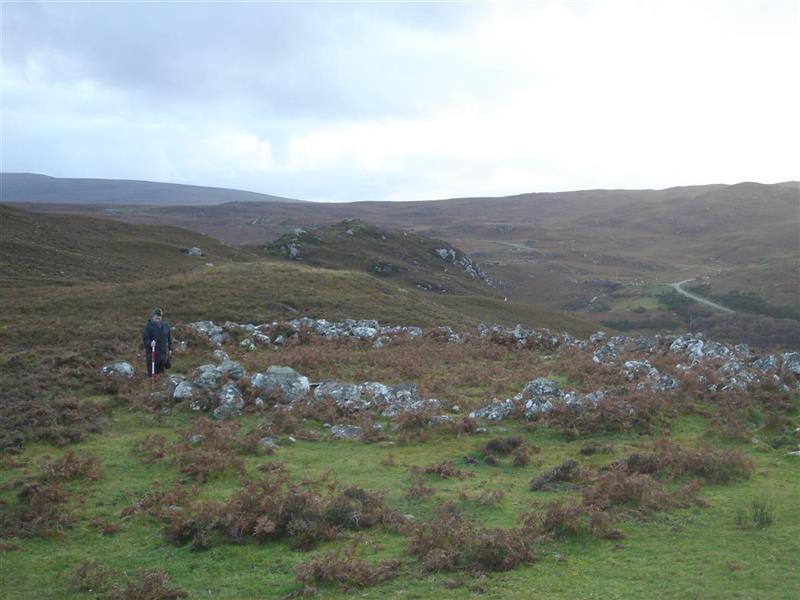 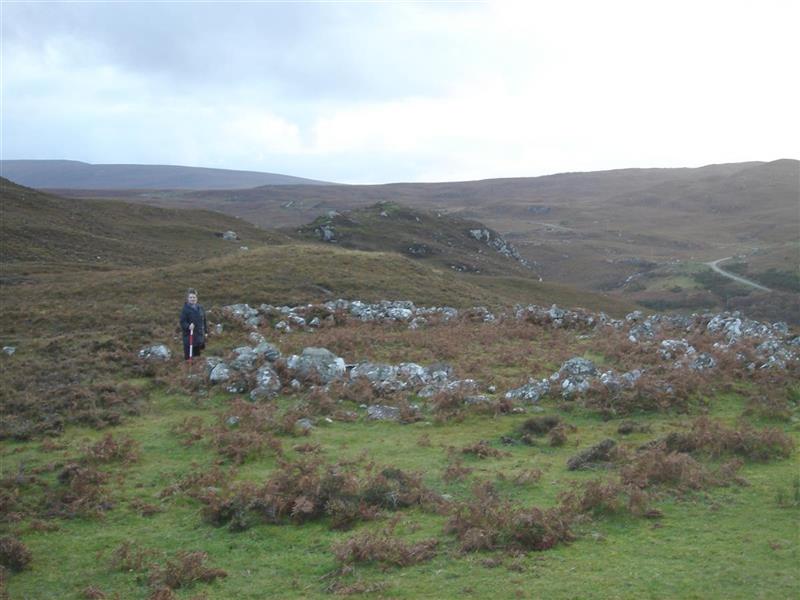 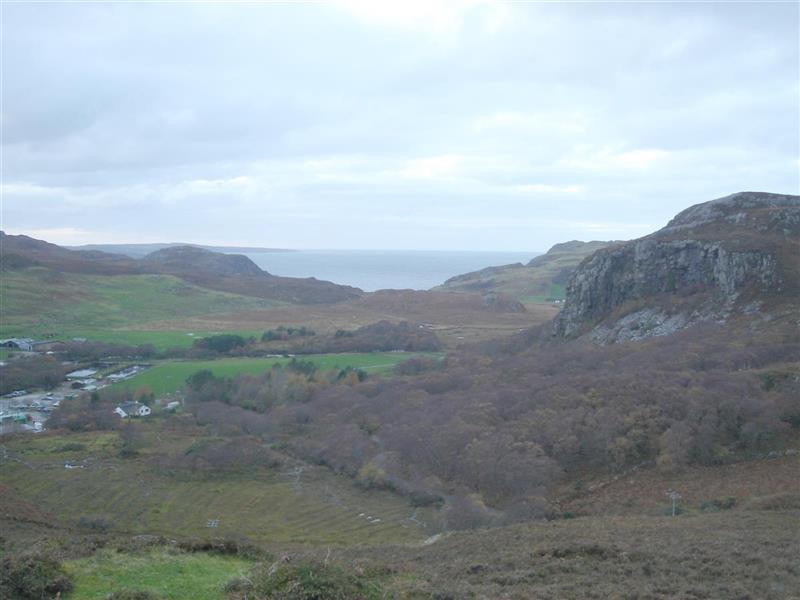 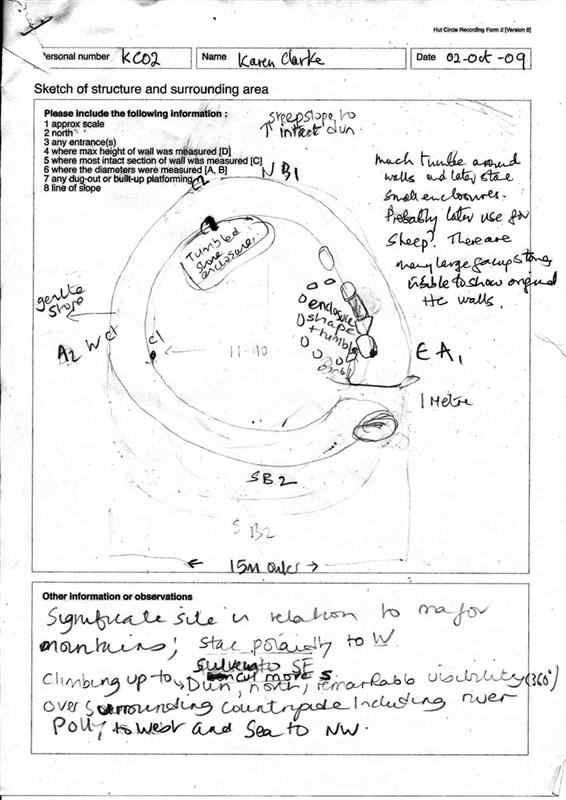 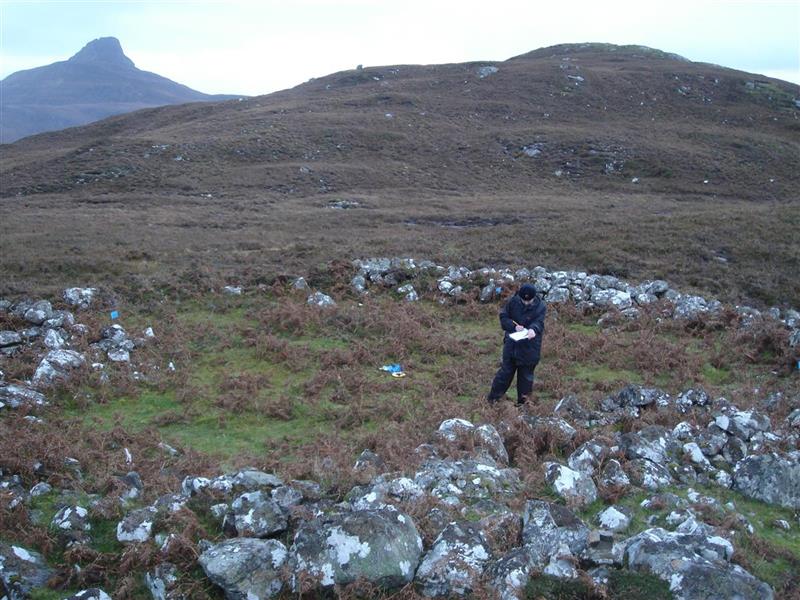 NC01SE 5 0785 1331.
Surmounting a rocky knoll at NC 0785 1331 are remains of a dun. Roughly triangular on plan it has measured about 13m E-W by 9m at broader W end, within a wall which from the spread of debris seems to have varied between c. 2m in E and c. 5m at entrance midway along W side. Few stones of either face survive. Inside the dun, some 3.5m from the E end, an overgrown stony bank spread to 2m curves from N to S, but it is uncertain if it represents a secondary reconstruction of a larger dun, or whether it is actually the main dun wall with wall to E (which is less substantial) representing an outwork. The dun has undoubtedly been robbed to build a circular rubble-built sheep fold at foot of knoll in SE.
This fold appears to have been constructed on top of an earlier enclosure - possibly a hut-circle, as the lower grass-covered courses indicate a wall thickness of c1.8m. Shieling bothies have been built into fold and a few lie outside it.
Surveyed at 1/10,000. Visited by OS (A A) 7 August 1974.

THE HUT-CIRCLE - The OS. Notes describe this structure as a sheepfold built on an earlier enclosure, possibly a hut-circle. Other features besides the thickness of the wall (our plan indicates an inner and outer wall varying between 1-2 m apart, with an apparent infilling of stones) are consistent with this suggestion, e.g. the internal diam. Of 11-12m; the walling in one or two places consists of large uniform level of the internal area; and the apparent enterance just S. of E. The two sections of walling projecting inwards from the main inner wall, on the NW and NE, may well be bothies or lamb shelters, dating to the 18c. Or later, but it is odd that so little - only two or three courses - is left of them. There are extensive stretches of field walls lower down the valley for which material from here and from the dun may have been taken. If the structure was originally a bronze or iron age hut circle or roundhouse, was it earlier than or contemporary with the dun? Their close proximity - the circle is about 20m SE of the dun measuring from their centres, and less than 10m below it - suggests that it might have been a living annexe to the dun. But the "circle" might on the other hand be the remains of a later structure which had no connection with the dun.
Lochbroom Field Club : Colin Scouller, date: 07/99.
See assoc. docs. File.

207875 913287 Cnoc na Dail KC002: The hut circle was visited by A Welti and K Clarke in 2009 as part of research for a dissertation on hut circles in Wester Ross. This was part of a degree course overseen by Aberdeen University. The detailed description logged by Colin Scouller in 1999 applied in 2009. The HC is built on a saddle with gentle slopes to E and W. Many large facing stones are visible, showing original HC walling before probable later adaptation as a sheep pen. There is grazed turf inside the HC and in the vicinity. There is a substantial turf/stone wall 250 m down slope. The remains of a dun are situated 20 m to N on top of a rocky knoll. Very good 360 deg visibility; peaks of Suilven, Stac Polly etc on horizon. Good view to N of River Polly estuary and sea. The structure has average internal diameter 11.75m, external diameter 15m. Double skinned walls are 2.5m thick with max height 1m. The SE entrance has standard terminals, external width 1.5m, internal width 1.5m. <1> <2>

[Note: a database was set up as part of research for the dissertation and was subsequently expanded as an extension of the We Digs Project (see website link below). The full access database can be made available to enquirers/researchers if requested - contact HER for details]