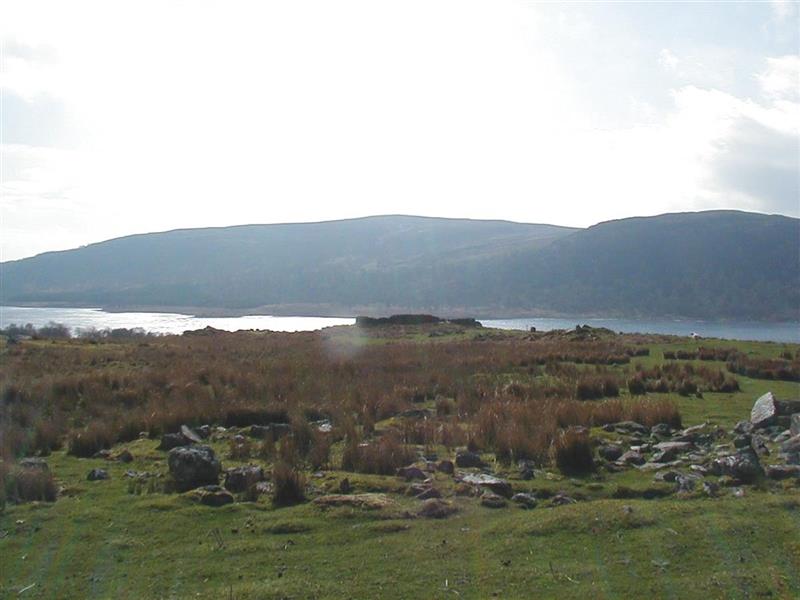 'Sutherland Monumental Inscriptions', pre 1855
Monumental inscription survey completed by A.S.Cowper & I.Ross.
The survey may not include inscription information after 1855 and each inscription transcribed does not give the full details that appear on the stones, abbreviations used. Some ommissions and inacuracies. First published 1989, reprinted 1991, 1996 & 1999.
J Aitken : 20/12/02
-----
An ancient burial ground of the Aberach MacKays, from which have come two cross-incised slabs and a cup-marked stone (See NC63NW 31).
RCAHMS 1911, visited 1909.

In 1909 the cross-incised stones were preserved on top of the east wall of the burial ground, but by 1961 they had disappeared. One stone, 2ft 4ins long, 7ins broad, and 6ins thick, bore at one end a cross, 11ins long whose upper and lower elements are longer than the lateral arms. The foot had a heart-shaped termination but the other arms ended in semicircular expansions. The other stone, similar in shape, was 3ft long with, incised on the face, an 8ins square subdivided by four intersecting lines, forming four small connected crosses. The burial ground itself lies on a rock knoll and is littered with slab-covered graves but nothing potentially Early Christian was noted by MacDonald. (See also NC63NW 9 St Martin's Well).
A MacDonald and L Laing 1973; Visited by OS (W D J) 13 May 1961.

The graveyard is no longer in use. It is divided into two sections; the rectangular part to the S according to Mr Maclennan (shepherd, Grumbeg, Strathnaver) is a private burial ground of the Mackays although it strongly resembles a ruined chapel or meeting house. Numerous unmarked slabs lie within both parts of the burial ground, but the cross slabs could not be located.
Visited by OS (J B) 12 April 1977.

Grumbeg 1 (St Martin), Sutherland, cross-slab
Measurements: H 0.71m, W 0.18, D 0.15m
Place of discovery: NC 6347 3837
Present location: in Strathnaver Museum at Creich.
Evidence for discovery: in 1909 the slab was recorded on the east wall of the graveyard. By 1961 it could not be found, but it was rediscovered sometime between 1970 and 1991.
Present condition: some edge-damage and flaking.
Description:
One broad face of this slab is deeply carved with wide pecked incision. It displays an unusual cross with semi-circular terminals and base. The upper arm consists of two inturned spirals, but the side arms are too damaged to detect more than their splayed shape. The centre of the cross-head is marked by a circular hollow. The shaft is emphasised by outer borders which extend round the D-shaped base, and the latter contains two circular hollows.
Date: eighth to tenth century.
References: Baldwin 2000, xiv.

Grumbeg 2 (St Martin), Sutherland, carved slab
Measurements: H 0.91m, W 0.25m
Place of discovery: NC 6347 3837
Present location: in Strathnaver Museum at Creich?
Evidence for discovery: in 1909 the slab was recorded on the east wall of the graveyard. By 1961 it could not be found, but it was rediscovered sometime between 1970 and 1991.
Present condition: some flaking.
Description:
One broad face of this slab has been deeply carved with wide pecked lines forming a rectangle subdivided into six irregular rectangles, possibly creating four conjoined crosses.
References: Baldwin 2000, xiv.
Compiled by A Ritchie 2016, Early Medieval Carved Stones project