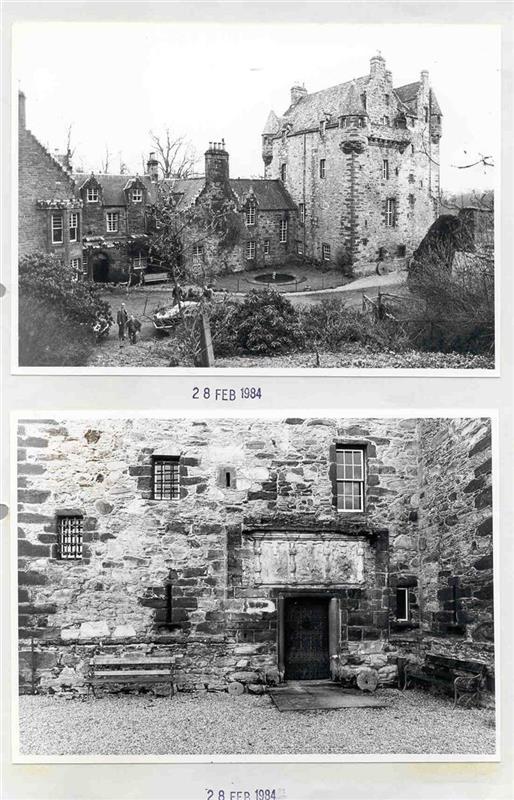 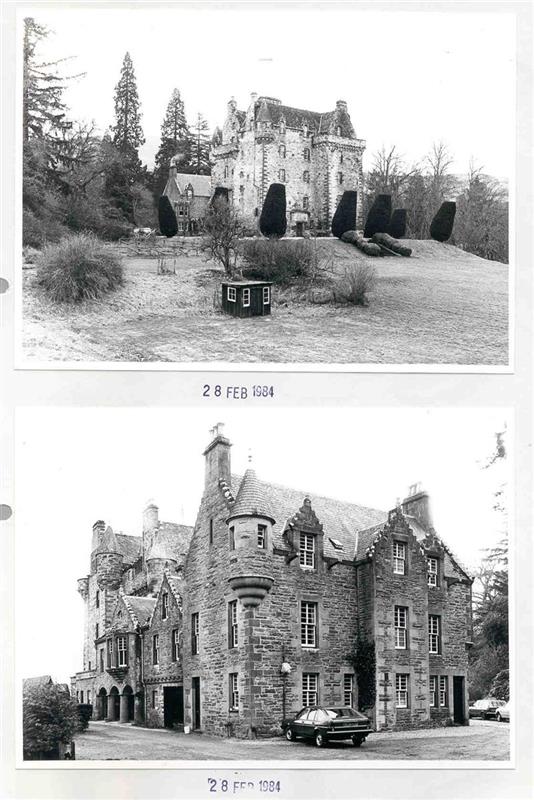 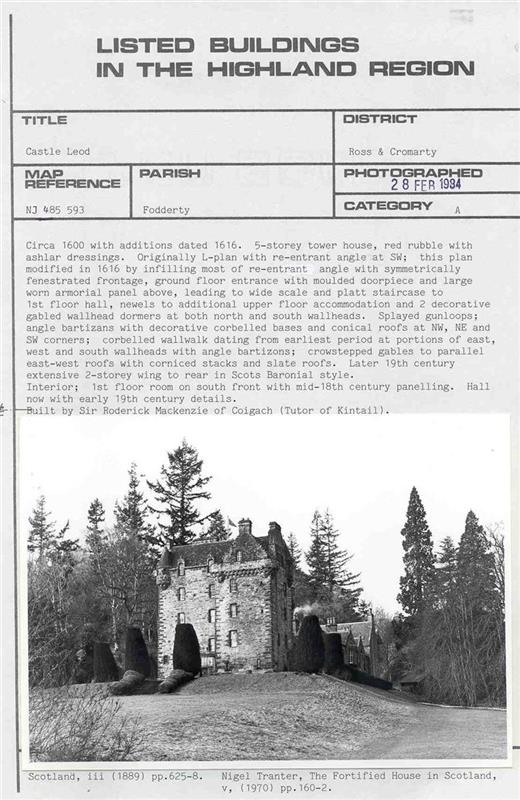 An early C17th tower-house impressively situated on a green mound and built to a modified L-plan whose re-entrant angle has been infilled by slightly later addition, which contains a secondary doorway, defended by shot-holes and surmounted by a heraldic panel bearing MacKenzie arms.
Original building had an open parapet at wall-head with bartizans at angles. The addition however covers up this parapet on original front wall and is carried a storey higher being finished with ornamental dormers and pyramidal-roofed turrets. Some of other angle-turrets and dormers probably added at same time. One dormer, on N, bears date 1616, but whether this is date of original (MacGibbon and Ross 1889) or modification (Tranter 1970) is not clear. Tranter says original was built in 1600 by Tutor of Kintail, Sir Roderick MacKenzie and is still seat of his descendant, Earl of Cromartie.
D MacGibbon and T Ross 1887-92; N Tranter 1962-70.

Castle Leod (Info from notice board). This castle is still occupied and in good condition. According to owners wife (Lady Cromartie), original date is not known but believed to be 15th century and top storey additions date from 1616. Additions of Victorian and Edwardian eras are built onto N wall of the castle.
Visited by OS (J B) 23 April 1975
----
ARCHITECT: D Matheson 1914 Squash Court

The plans shown in photographs C12925-30, C12975/CN-77/CN and C12981/CN (from survey of plans lent for copying in June 1993 by Mr Mike Taylor) were found in a derelict estate office on Castle Leod estate. The material relates to two periods of alteration work carried out at Castle Leod, for Earl of Cromartie- first 1851 by Andrew Maitland, who adapted designs by David Bryce, second in 1904, when N wing, previously altered 1874, was mostly rebuilt. The material also relates to the nearby Inchvannie Farm Steading, and the pump room at Strathpeffer Spa, which were both owned by the Castle Leod estate.

A project of surveying and recording the archaeological sites within the grounds of Castle Leod was carried out by members of the North of Scotland Archaeological Society (NOSAS) in the winter of 2012-13.

The castle sits on a man-made “motte”or mound which probably dates to the 13th or 14th century. In the 16th century John of Killin, 10th Chief of the Clan Mackenzie was granted the lands of Castle Leod and it is thought that much of the present castle dates to this time. In 1605 Roderick (Rory) had married Margaret MacLeod, an heiress from Lewes; he marked the occasion by making significant alterations to the castle including an ornately carved stone over the doorway in 1616. <1>

Castle Leod is an L-shaped tower house located north of Strathpeffer in Easter Ross. The present castle occupies a grass-covered mound that is believed to be an earlier motte on which a previous wooden or stone castle tower was built. There are references to a possible Pictish fort on the same site, which may also have been later re-used by the Norse. Although the earliest period of construction for the tower is unclear and the earliest documented construction refers to the early 17th century, the construction and fabric of the lower storey of the castle indicates it was built as early as the 14th century. <2>

NGR adjusted based on 2018 aerial photographs. <3>