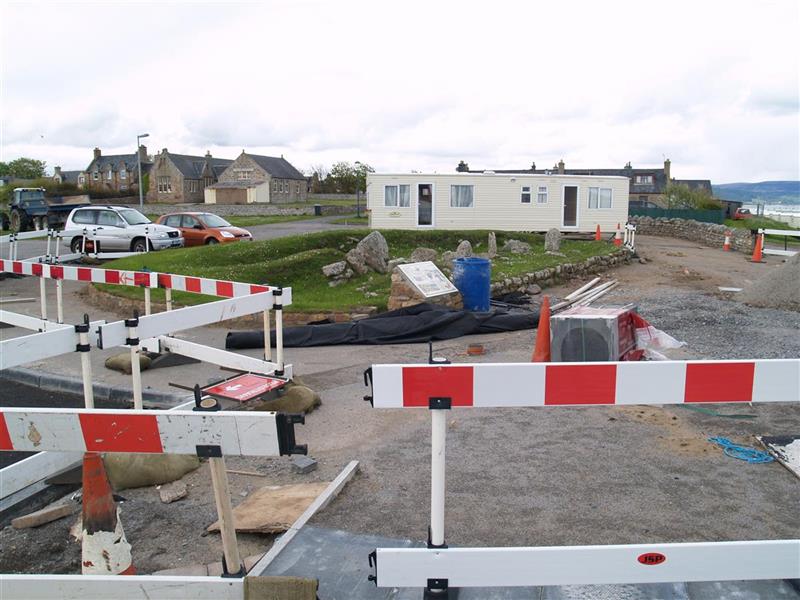 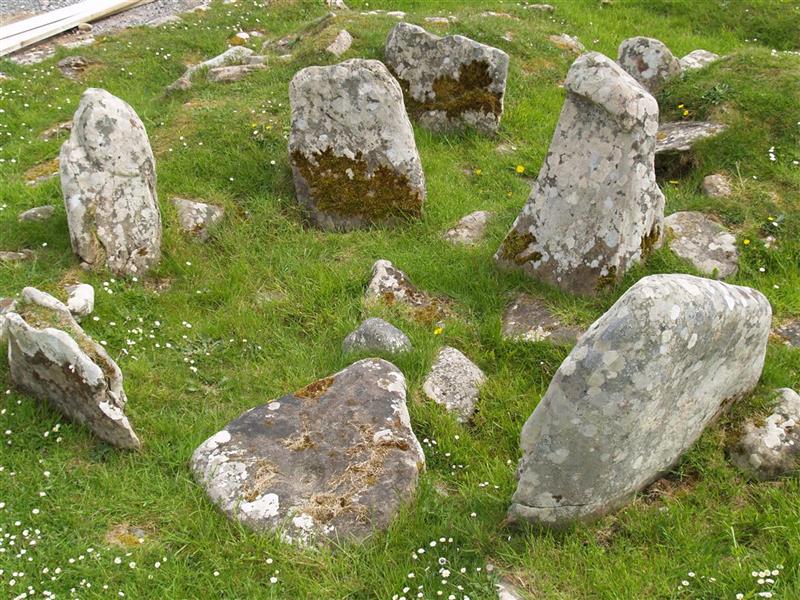 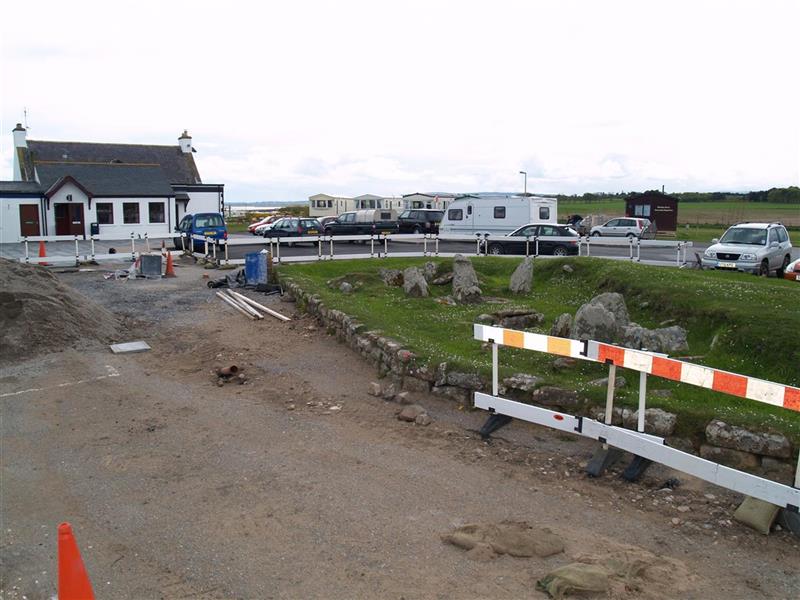 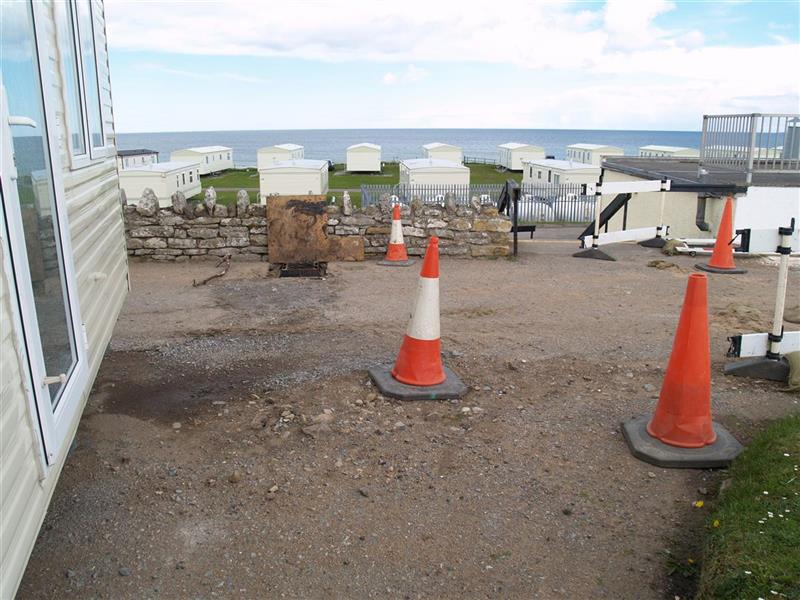 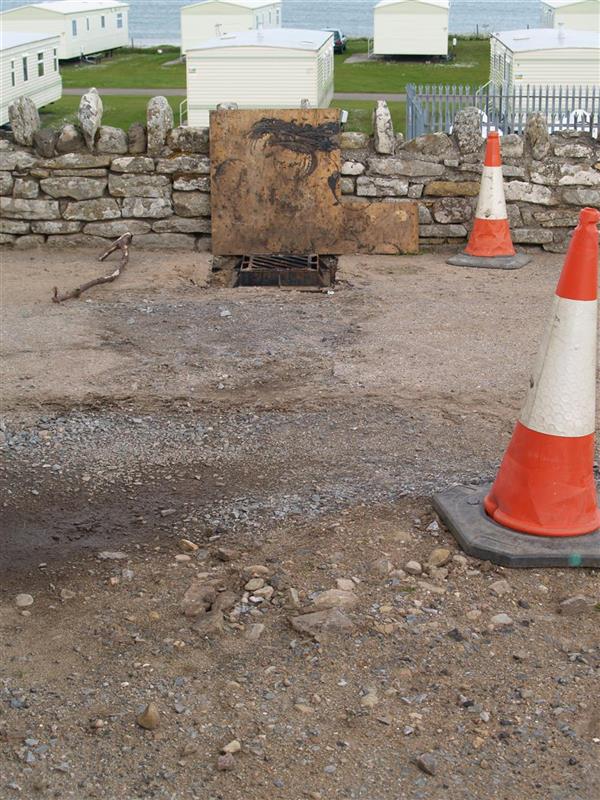 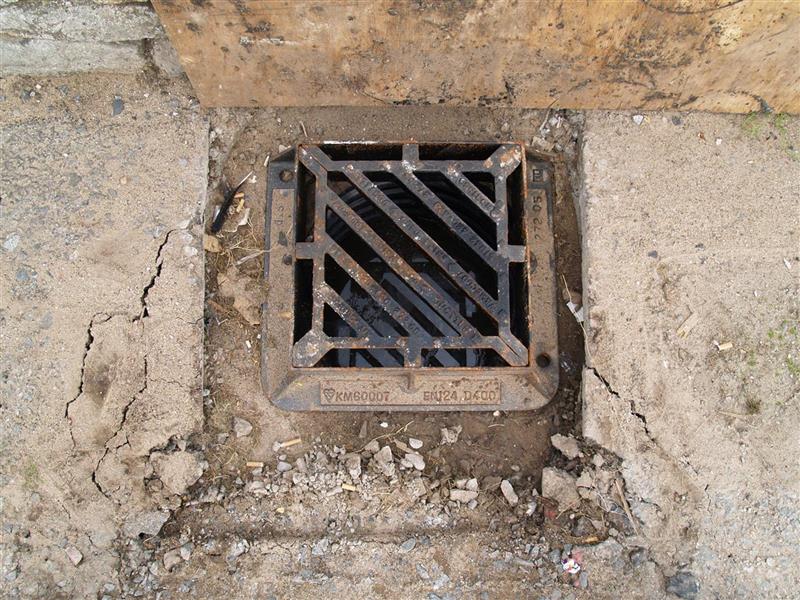 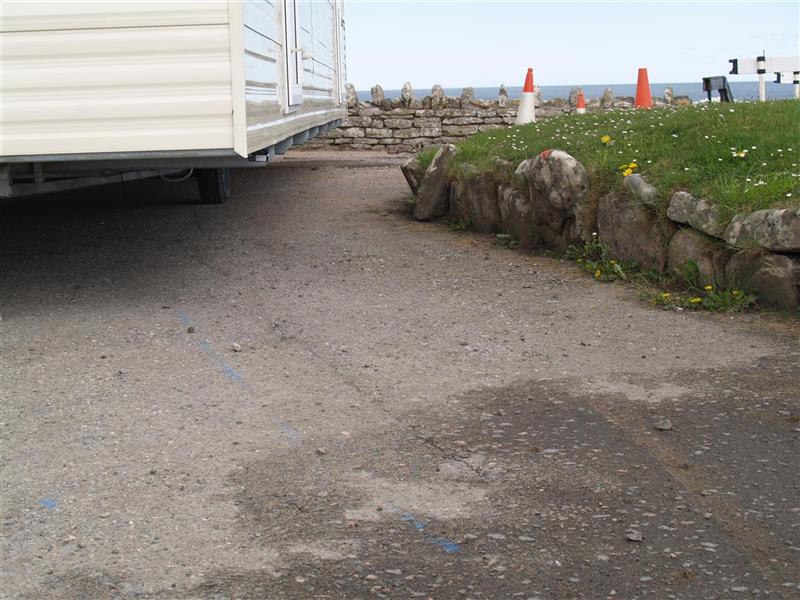 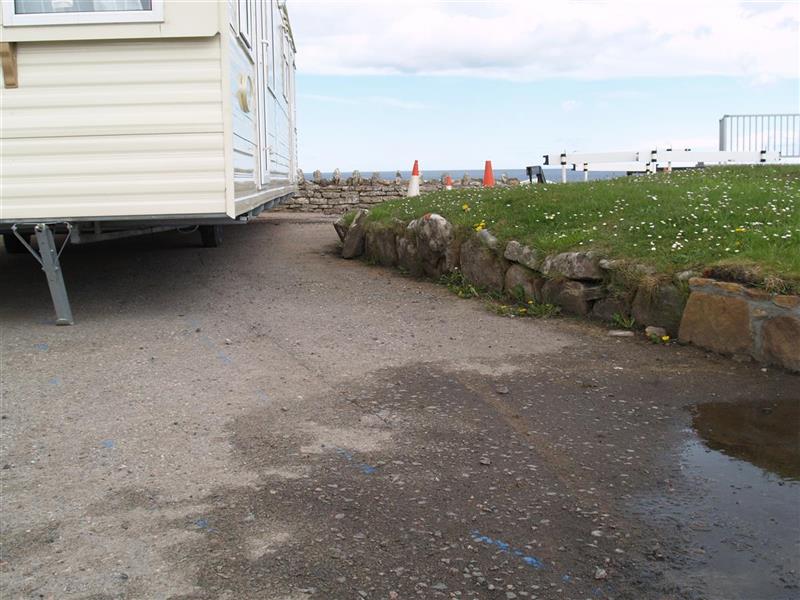 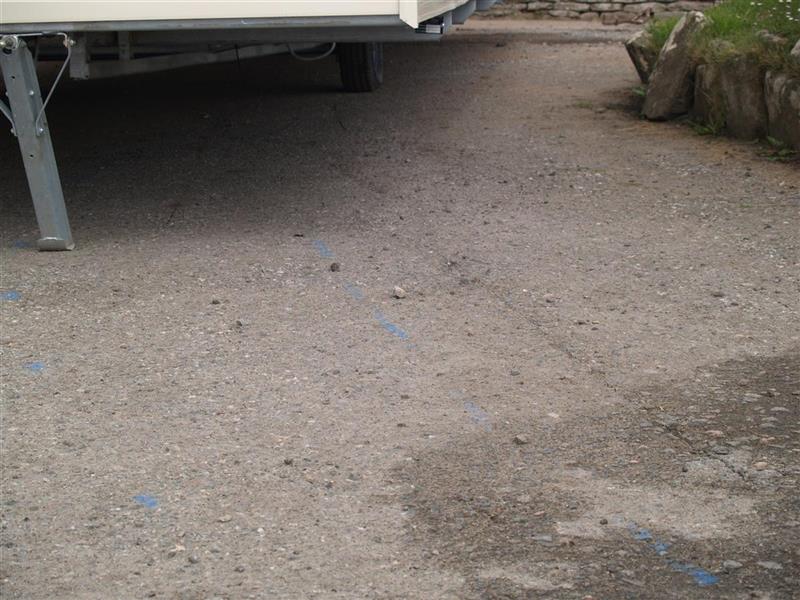 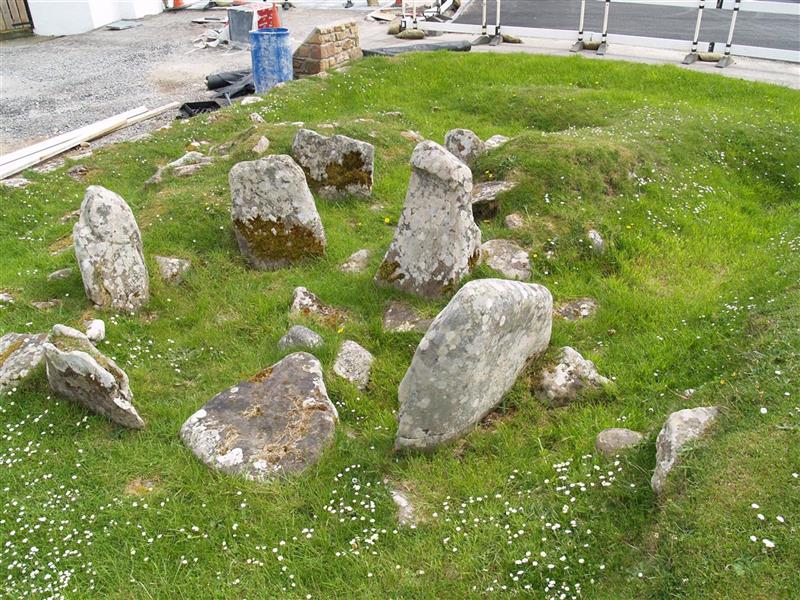 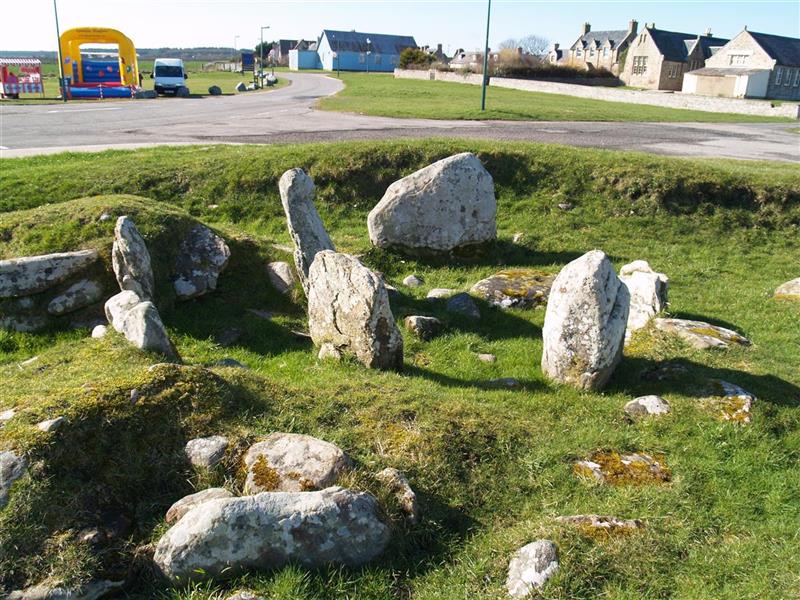 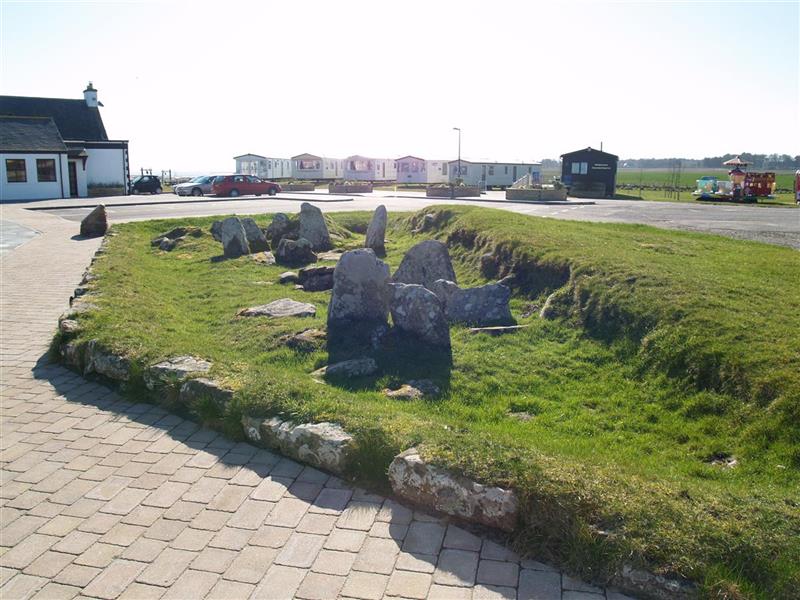 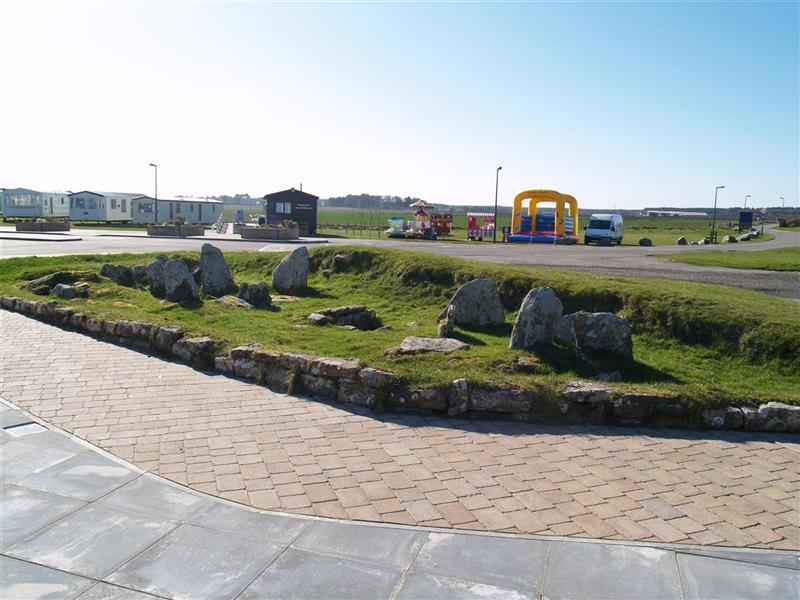 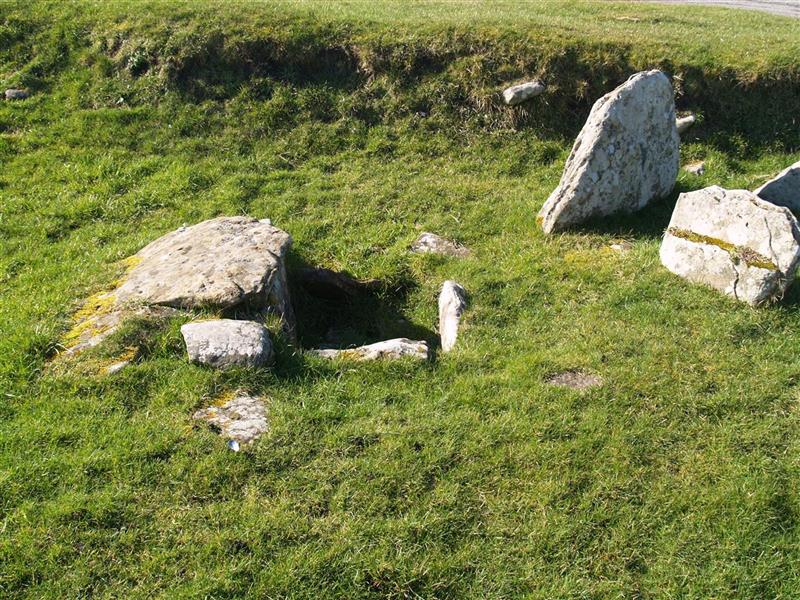 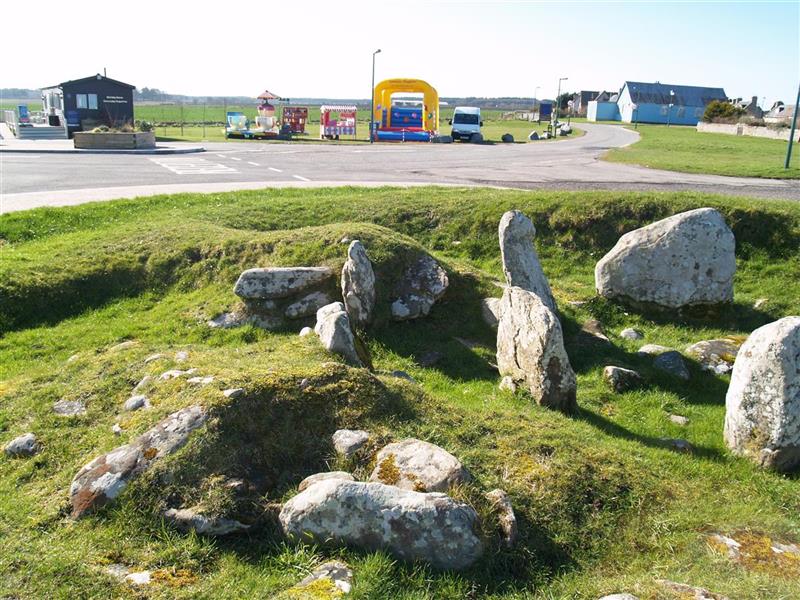 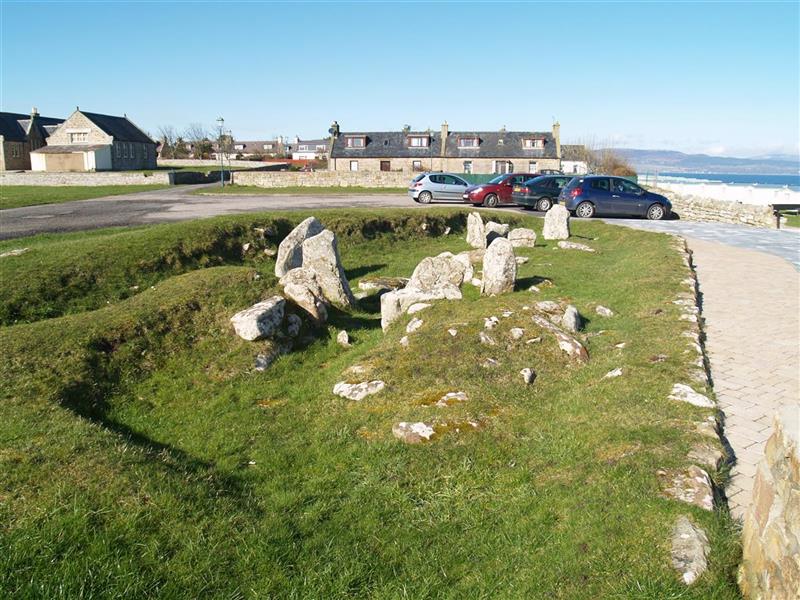 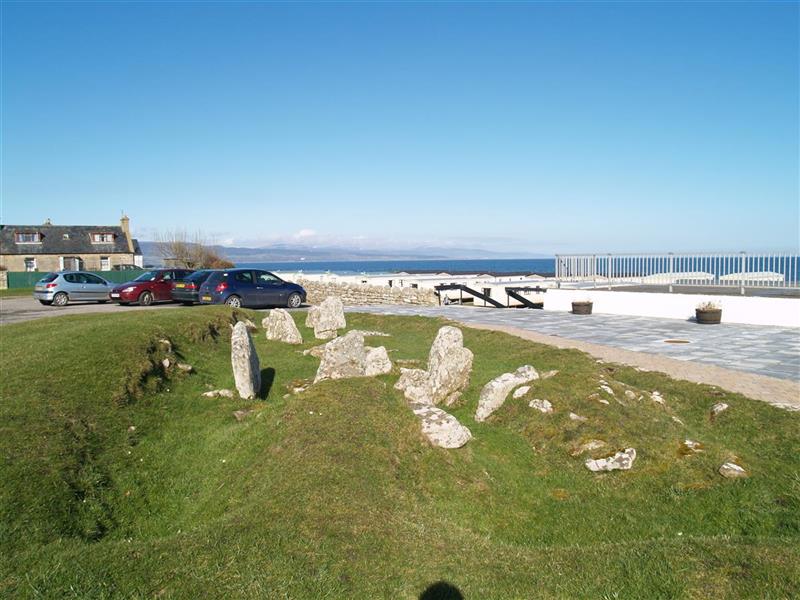 A low mound excavated in 1956 and 1960 was found to be the remains of a stone cairn containing two neolithic burial chambers and also bronze-age graves. Only the base of the structures is preserved, but the excavated chambers can be viewed with the covering mound removed and give an excellent view of the overall plan and of features not visible in other cairns.

The main chamber is entered from the south, where a short passage with drystone walls leads first into an antechamber and then into the chamber proper, an oval area constructed of six upright slabs with drystone walling between. Most of the original corbelled roof had been destroyed before excavation. At least six ad ults and nine children had been buried in this chamber before it was blocked up. At the other end of the cairn a short passage opens into a second ruined chamber formed of five upright slabs originally linked by drystone walling. Most of this chamber had been disturbed before excavation. Bones of animals and birds, including dog, pig, otter, great auk, duck, guillemot and gannet were found both in the filling of the main chamber and in the body of the cairn.
Part of the original cairn material remains on the west side and beside the passage on the south. The original mound would have been higher, but something the shape of the fenced area. The neolithic cairn was again used as a burial place in the early bronze age, when two stone cists were inserted into the mound. In one, which has been removed, a woman was buried with a food vessel pot and a necklace of black jet beads. The other cist can be seen in the centre of the cairn between the two chambers. It is formed of four stones set on edge and was covered by a flagstone. It contained the bones of two babies, a food vessel pot and a corded beaker. Later in the bronze age cremation burials were inserted into the cairn, one with a bronze razor.
Information from ‘Exploring Scotland’s Heritage: The Highlands’, (1995).

Radiocarbon dates for some of the human remains were obtained and published as part of National Museums Scotland Radiocarbon Dating Programme in 2006. These produced predominantly Neolithic dates. <1>

Finds from the cists are listed in the NMS catalogue. These include a food vessel (Acc. No. EQ 611), Beaker sherds (EQ 633), food vessel sherds (EQ 634). 2 barrel shaped jet beads (EQ 614 and EQ 631 )and 14 jet disc beads (EQ 615) were also found from one of the cists and from disturbed material outside the chamber. It is unclear which beads were found where however. <2>

See finds report included in the 1962-3 PSAS article on the excavations for details of all the finds. Unprovenanced finds from the cairn are attached to the parent record MHG11630.

Human remains from the cists are with NMS collections. <3>