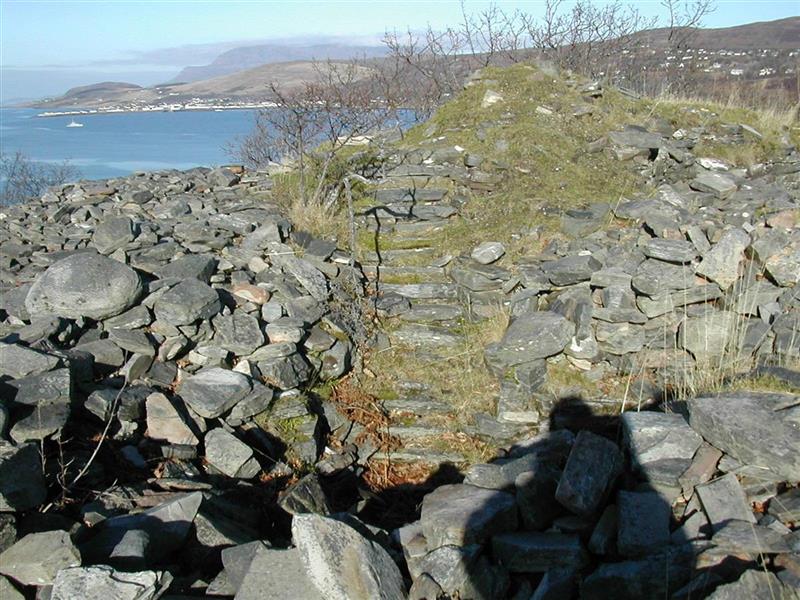 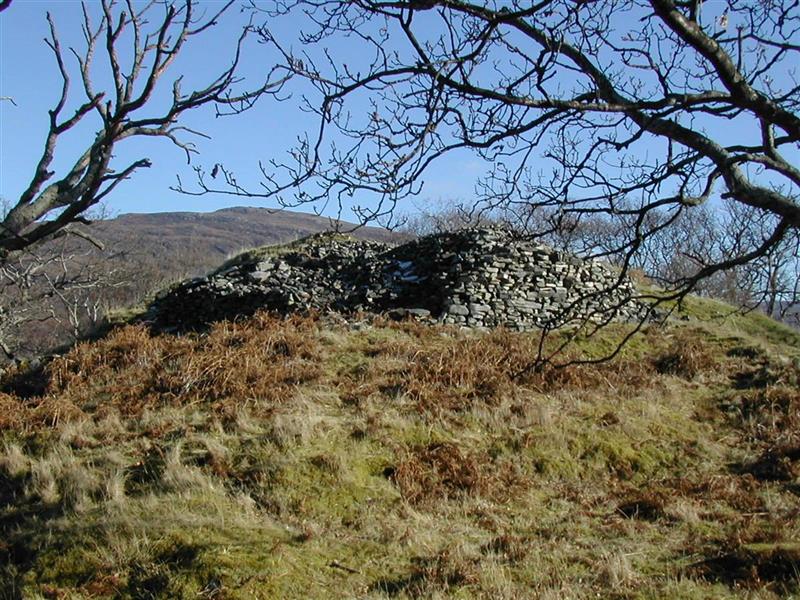 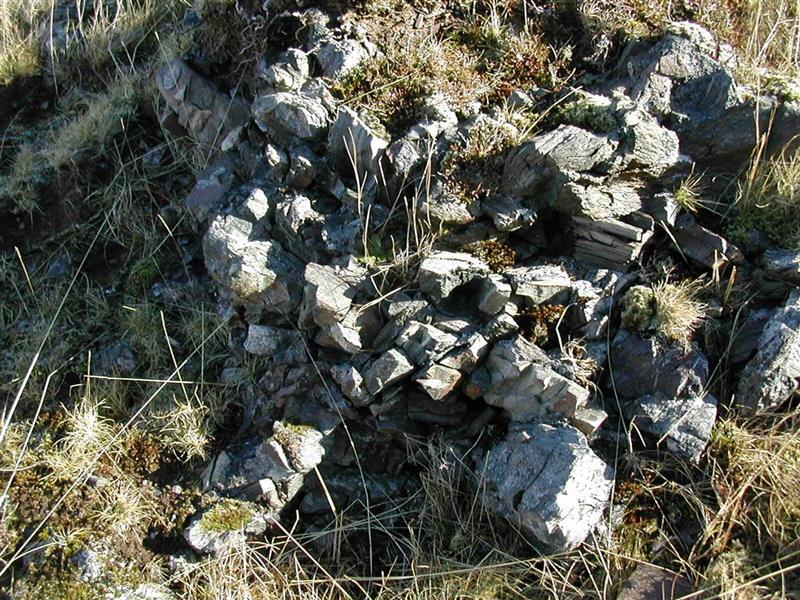 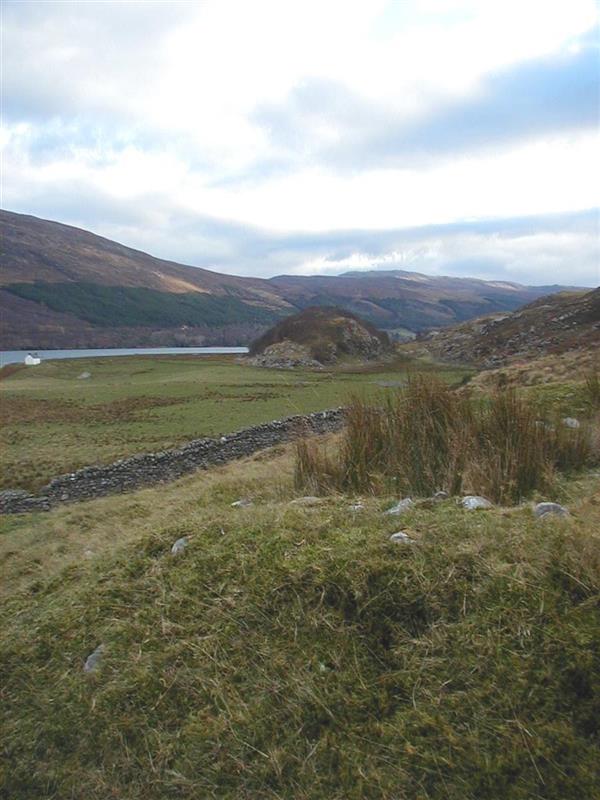 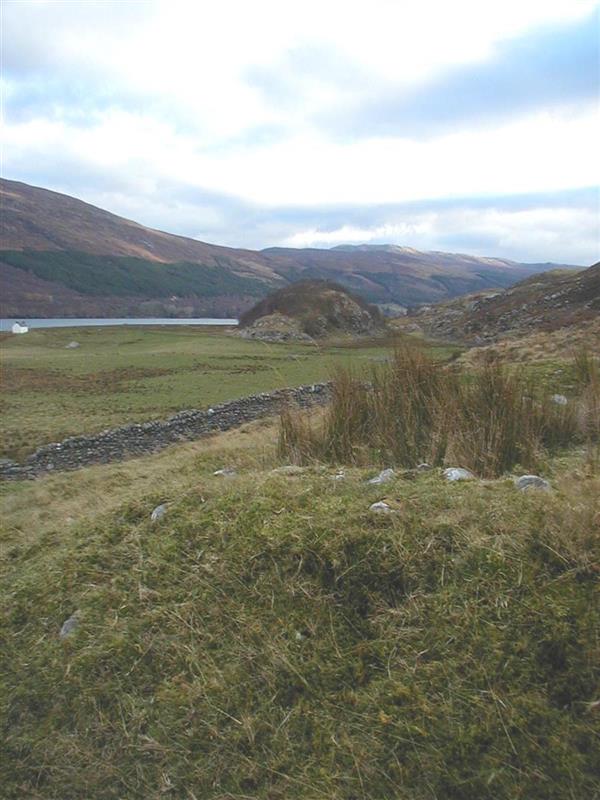 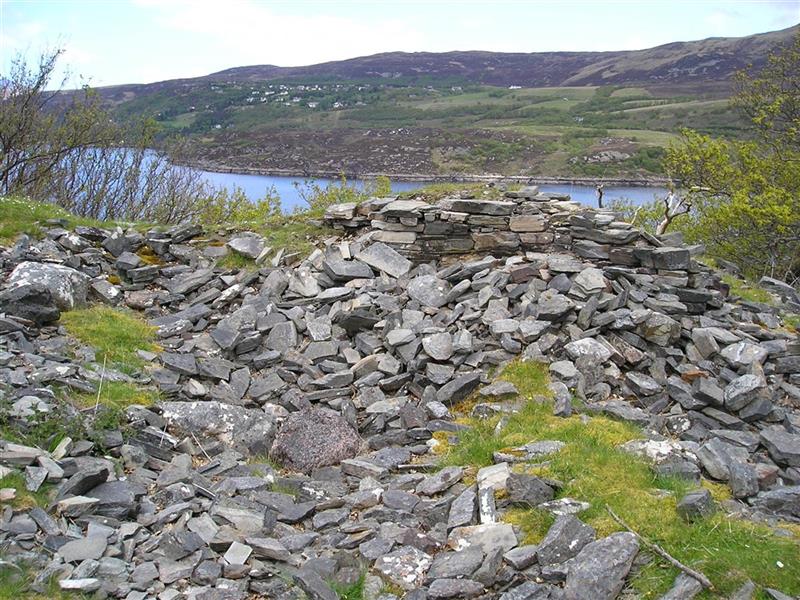 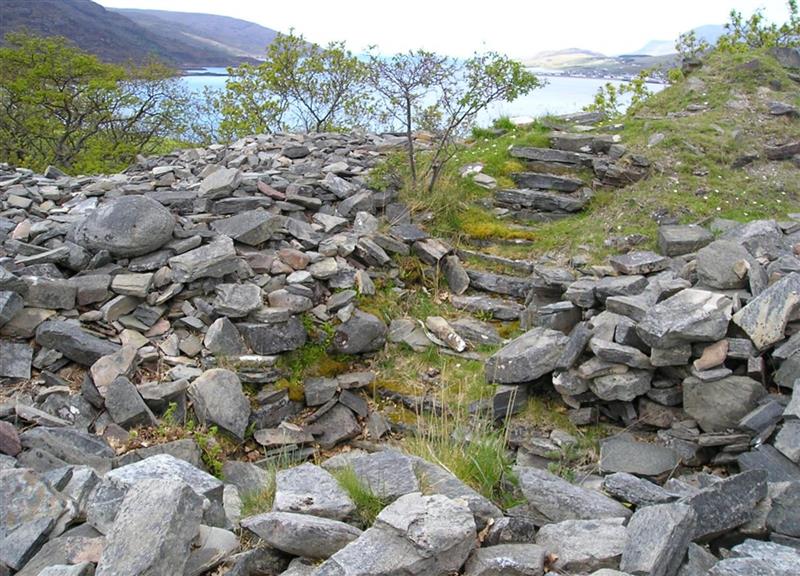 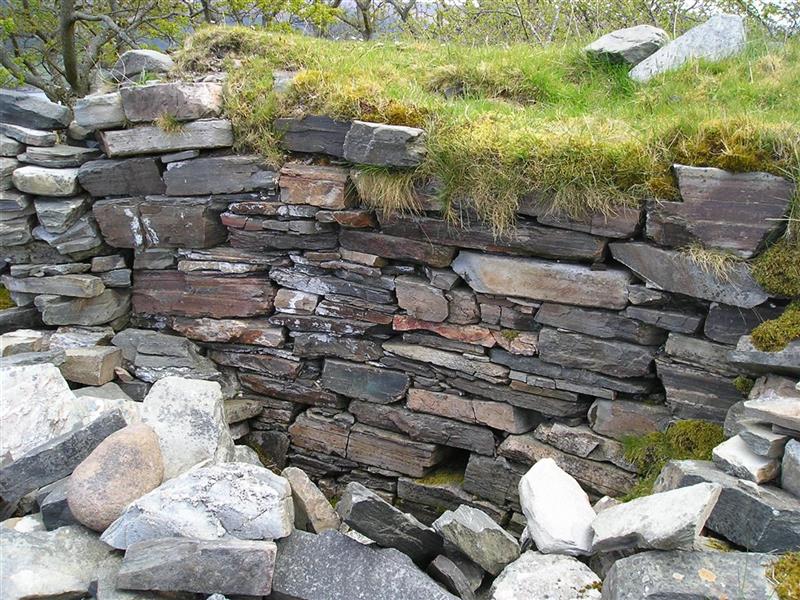 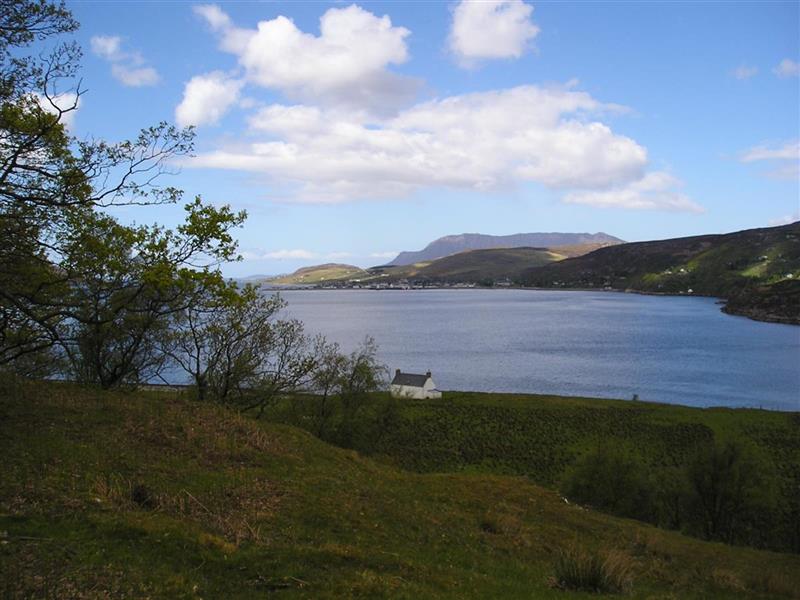 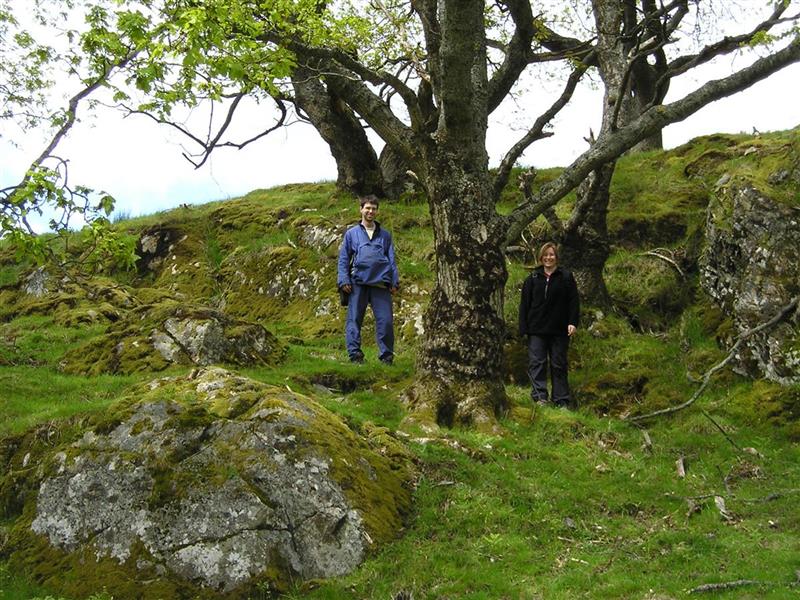 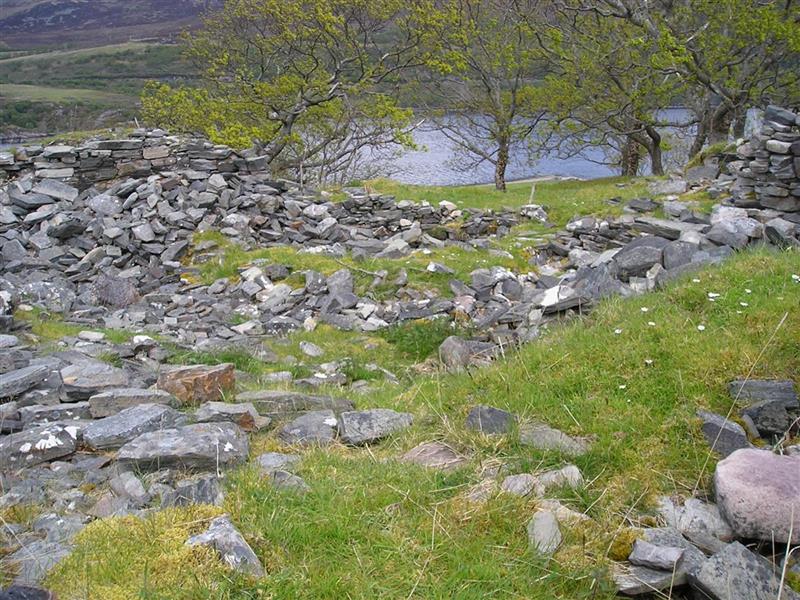 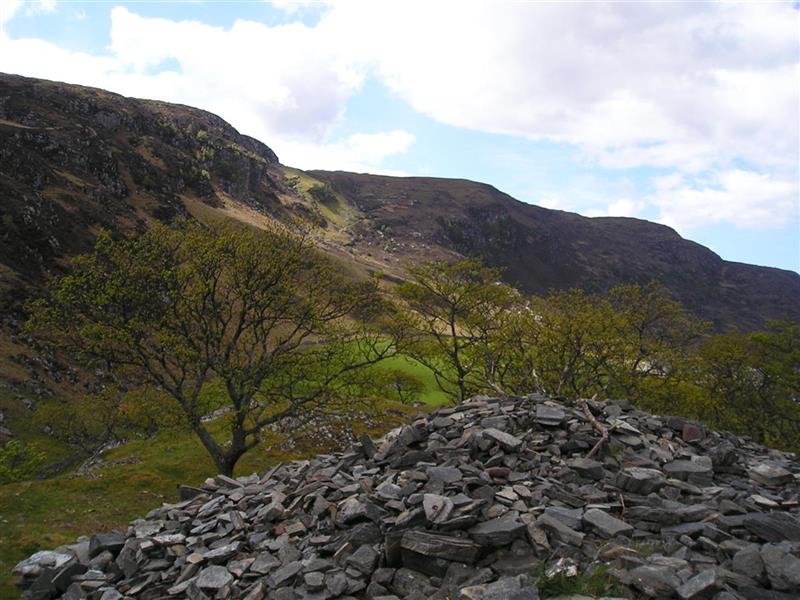 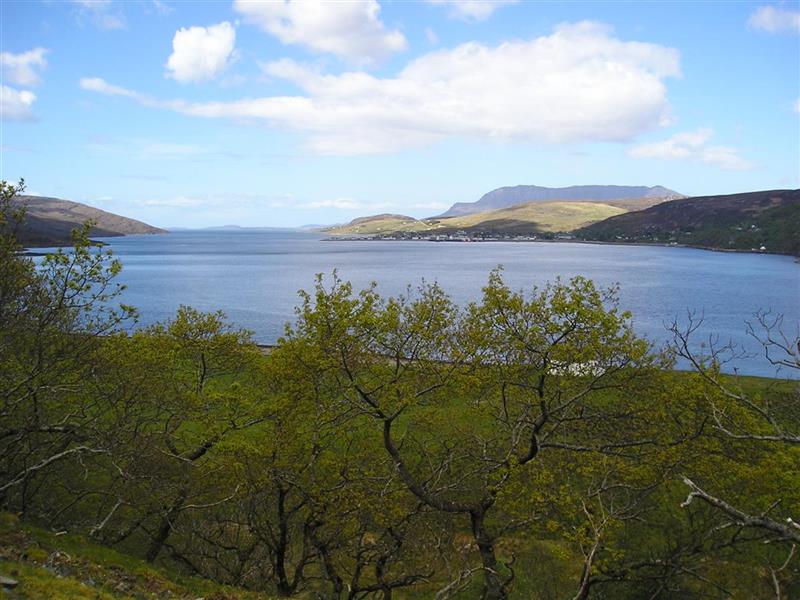 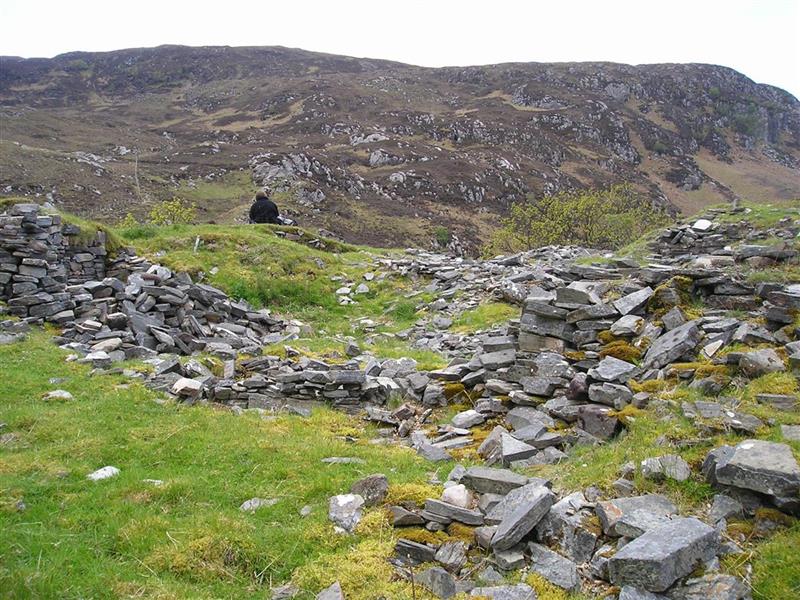 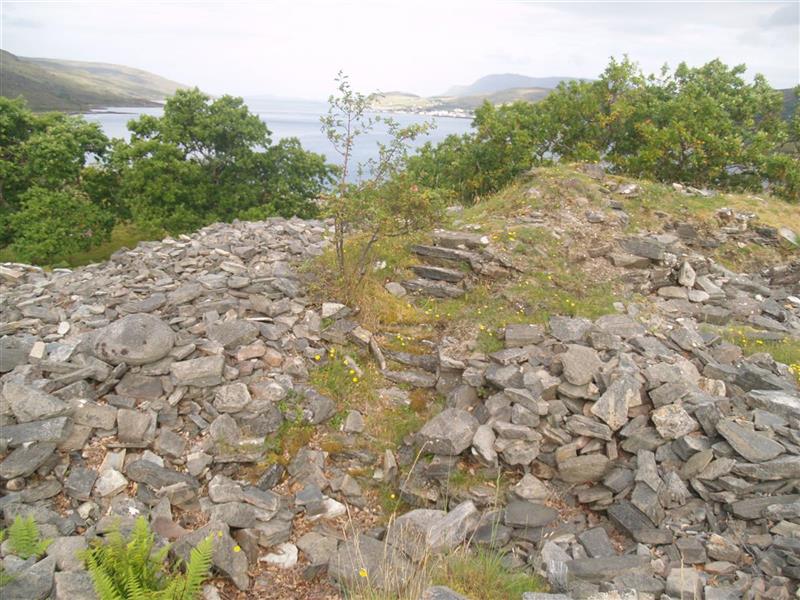 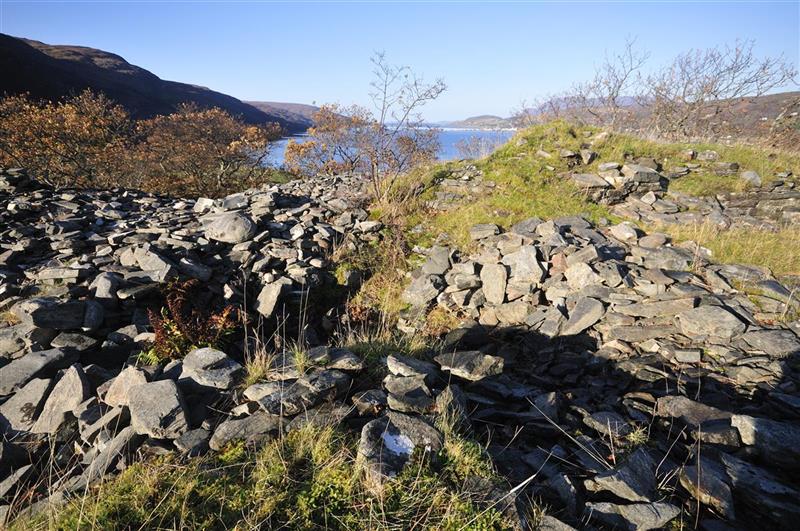 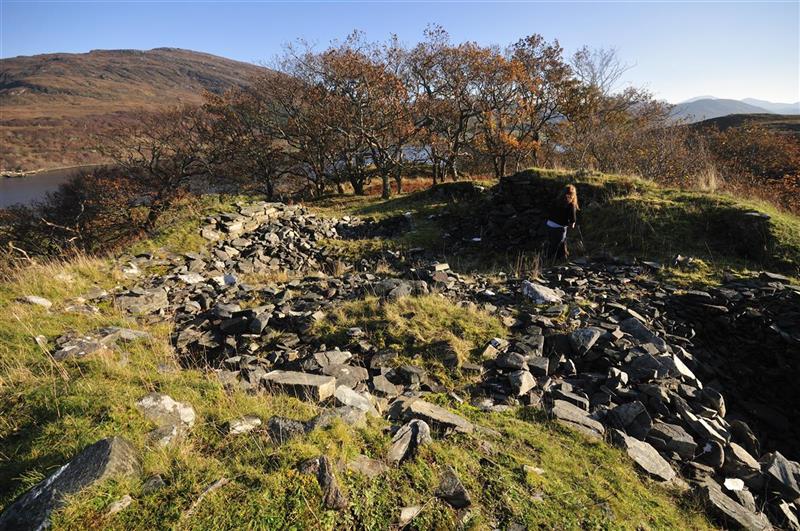 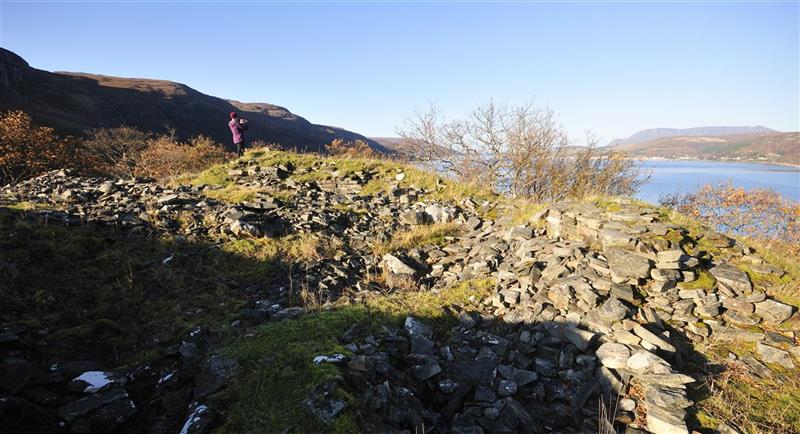 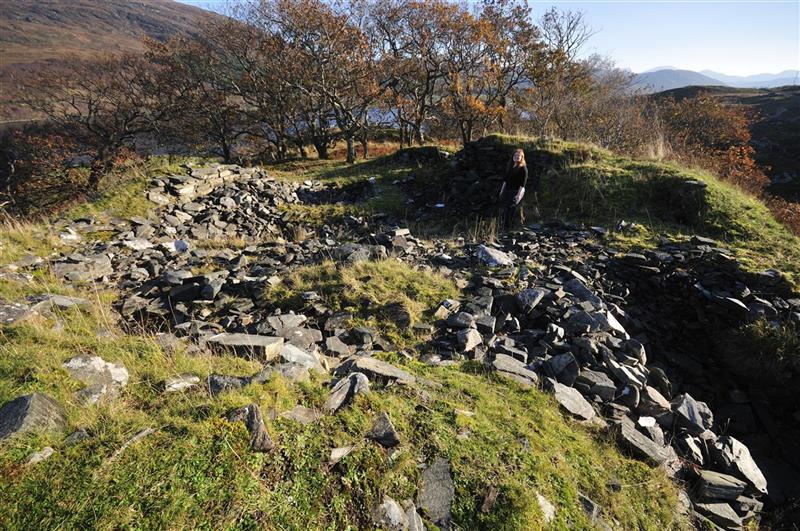 Site visit 10/12/2002 Mr Bastow (local researcher) points out that stone used in two phases different and that early phases used local stone, but later phase uses stone that is derived from outcrops S of Blarnalevoch township. Part of the internal walling, steps are still visible, but much of structure only visible as stone scree. Excavation spoil is dumped in mound on outside W side of tower stucture. Vitrification visible in places on W side as are parts of external walling. General views. - HAW 12/2002

Dun Lagaidh: A complex on an oval rocky hill comprising a timber-laced fort (MHG7812), now vitrified, overlaid by a dun (not broch as suggested by Feachem, 1963) which was utilised as a castle in medieval times (MHG45427). Excavations by MacKie in 1967-8 revealed that the fort, formed by a single wall, measured 85 yds in length by between 20 and 30 yards wide, with an additional outer wall defending the E end, where a narrow entrance passage can be seen. A C.14 date of c. 565 BC was obtained for a carbonised branch under the fort wall. The only artifact found in association was a fragment of thin bronze, possibly part of a mirror or razor.
The dun overlies the E side of the fort, and measures c. 58' overall diameter with solid walls 11' - 14' thick. The E entrance, with single guard chamber, is checked for two doors, and on the opposite side of the central court can be seen an entrance leading to an intra-mural stair, now comprising 16 steps. Finds from the central court include a bronze ring pin, an iron two-link bit, several bone bobbins, many short iron nails, and fragments of sheet bronze with rivets, possibly chippings from a patch for a metal vessel.
The site was reoccupied and refortified, probably in the 12th century, when the dun was converted for use as a castle. The entrance was blocked, the wall strengthened and the intra-mural stair re-used as an entrance. Two radial walls were built from the dun to the walls of the vitrified fort, thus forming a bailey. Under rubble from the N radial wall was discovered a hoard of 15 whole and 9 half coins, identified as silver short-cross pennies of the late 12th - early 13th century.
E W Mackie 1967, 1968, 1969; R W Feachem 1963

This site was included in Mackie's 2007 'The Roundhouses, Brochs and Wheelhouses of Atlantic Scotland c.700 BC - AD 500: Architecture and material culture'. See link below to HES Canmore record which includes the chapter on this site. <1> <2>

The finds from the site, with the exception of the bronze razor from the fort, came from the floor of the dun and later castle. They belong to the Iron Age and Medieval period and comprised a bronze pin, iron bridle bit, iron nails, rivets, bronze sheeting, a small spear head, bone pin, bone counter, bone handle with iron tang and a boar's tusk. The finds from Mackie's excavation at the site are in the Hunterian Museum, and listed on their online catalogue (Acc. Nos. GLAHM:A.1973.29-54). See link below. <3>