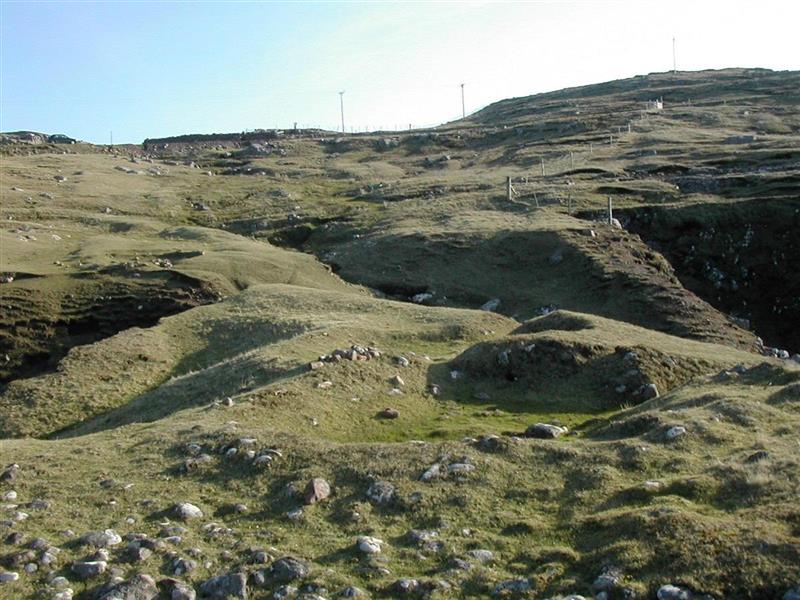 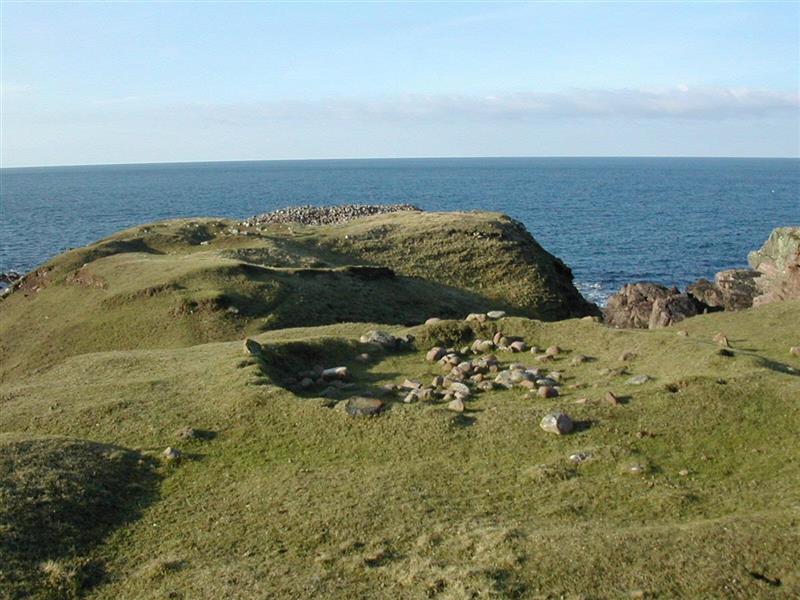 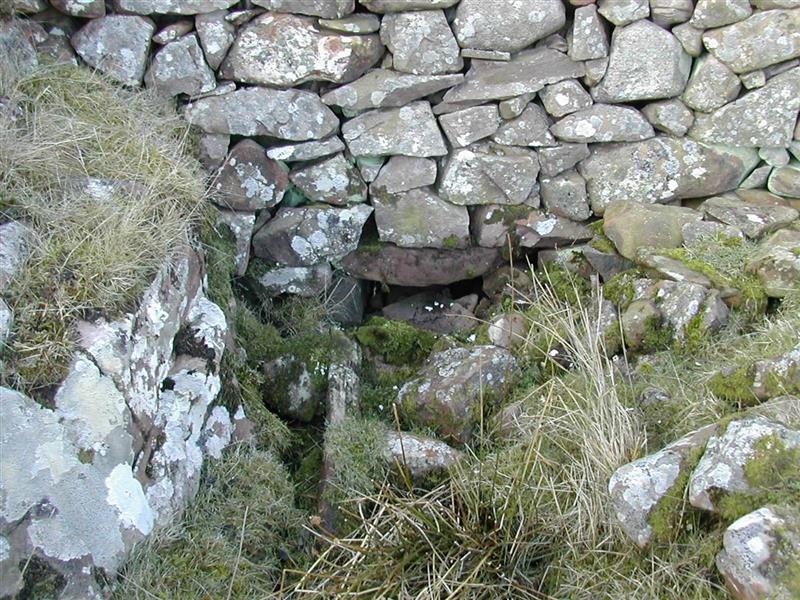 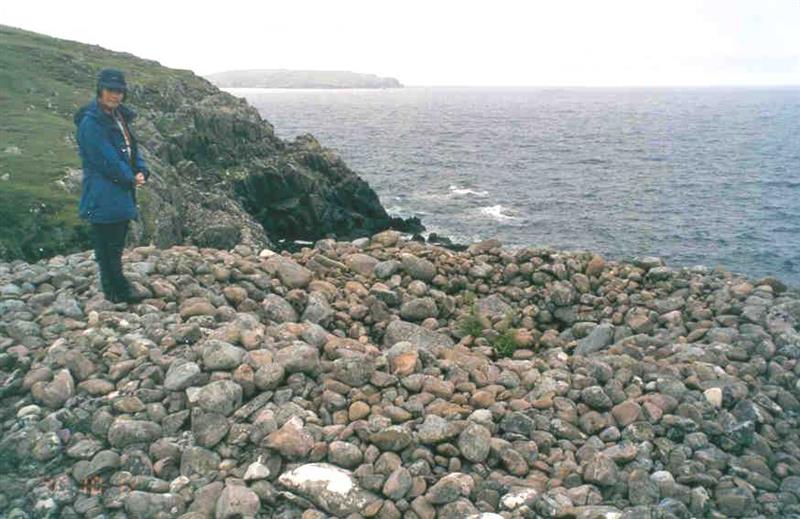 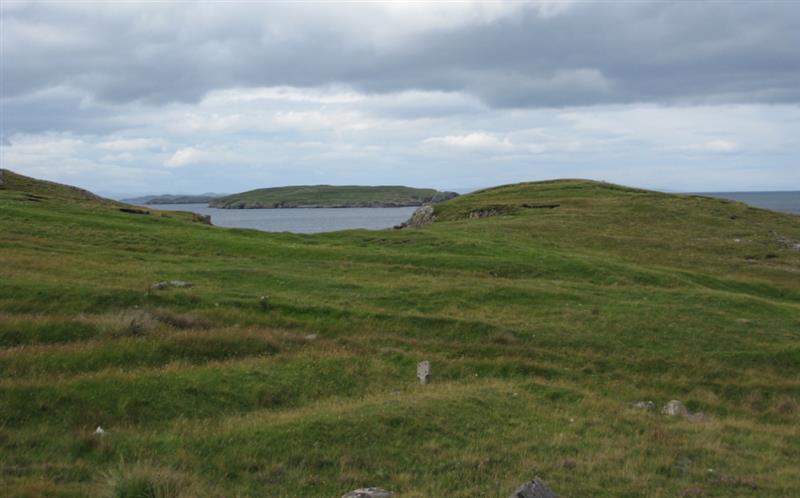 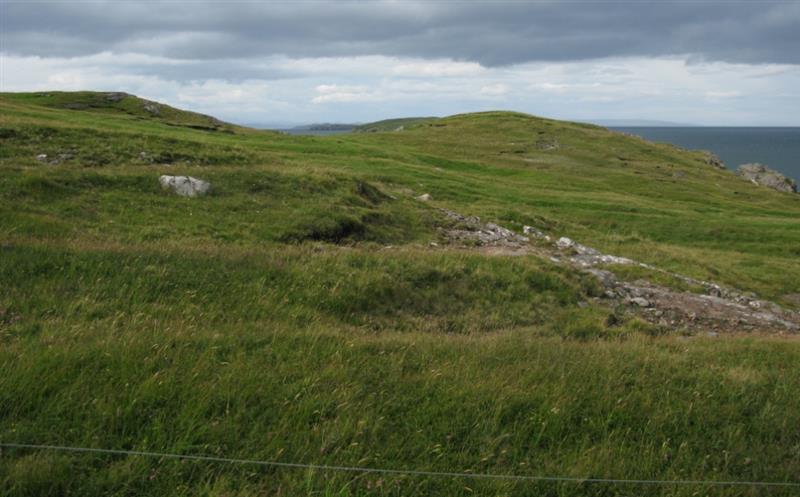 Thumbnail Photo of possible kelp kilns
Wester Ross Project - Cathy Dagg, 02/04
------
No change to previous reports. There is little trace of the horizontal mill on the burn running into the Geodha an Uisge. Although this appears to be an unlikely location for kelp burning, considerable amounts of loose kelp are known to wash into the Geodha na Glaic Baine, which is accessible from above.
The small sheep fank at the road junction is also considered by locals to be a former mill. There does appear to be a lade approaching from the east and running under the structure.
Wester Ross Project - Cathy Dagg, 23/03/04
------
NB91SE 2 9686 1380.
(NB 9686 1380) Cairn, partially excavated by a local. (Also a 20th century burial - sailor, 1914-18.)
OS 6"map, annotated by I Crawford, September 1961.

The cairn stands on a narrow, flat-topped grassy promontory, flanked by deep gulleys; it consists of an irregularly-shaped mound, 1m high, of loose water-worn stones with no evidence of a retaining circle or chambering.

A small area in centre has been cleared to natural ground surface. Around and partially underlying cairn are overgrown patches of stones, giving a superficial appearance of walling, and to E are the remains of three small hollowed-out enclosures.
Local enquiry (Mr Maclennan, Blarbuie) ascertained that (1) the cairn was originally excavated about 50 years ago by a local man, no records of finds being made. (2) the visible clearance was made recently by a Mr McGregor of Glasgow University who thought that a fort had originally occupied the site; (3) the small enclosures were built and used for seaweed storage and are of no significance; (4) the "Sailor's Grave" is sited on another spur to N.
Although grassed-over rubble gives a superficial appearance of walling, the form is meaningless. This and fact that nearly all the stones of the cairn are water-worn beach stones, quite unsuitable for building, make it unlikely that this was a fort. A robber burial cairn is the more likely explanation.
Visited by OS (F R H) 30 May 1962.

The promontory on which this cairn stands is capped by a layer of gravel and small stones up to 8' deep, which is in turn covered by a thin topping of peat. The cairn itself is a mound of bare stones (11.5m NW-SE x 8m NE-SW x 0.8m high) and it looks from excavations around it as if peat at one time covered it, signifying it is of some antiquity. It is partly the edge of these excavations and a few fortuitous stones that OS field Surveyor (F R H) has taken to be pre-cairn walling. Despite lack of evidence from excavation, it seems likely that this is a sepulchral cairn placed on what is now remnants only of a small raised beach, and it is not unlike cairns on Rhum (See NM39NW 3). There is no indication of a fort here, although position is a good one for a small defensive structure.
Surveyed at 1:10560 scale. Visited by OS (A A) 16 July 1974.

Three pits (ACHIL94 30-2) which may have been kelp kilns, a possible-mill and some lazy-beds lie on, or adjacent to, rocky promontory called Geodha na Glaic Baine. In addition, there is a raised beach on promontory into which a pit has been dug, the upcast from which gives the appearance of a cairn, but there is no visible evidence to confirm its identification.
Two of the pits are on rocky promontory and third is on other side of a neck of land that joins promontory to the mainland. The pits are subrectangular on plan, between 0.4m and 0.6m deep, with flat bottoms, measuring from 3.3m to 4m in length by between 2.5m and 3.4m in breadth, each with a drain leading out to cliff-edge. The pit on mainland is cut into lazy-beds on NE and SE.
What may be a platform for a mill-building is situated S of a small burn which runs over cliff to S of the promontory. The platform is set into slope of ground on E and measures 6.9m N-S by 4.5m within much-reduced, rubble walls spread to 1.4m in thickness and up to 0.6m high. A few facing stones are visible where walls are best-preserved on N, and a drain cuts through middle of building from E-W, which may mark the line of a lade.
The lazy-beds occupy full width of grassy slopes between the cliff edge by the promontory and the public road to Reiff, extending for a distance of about 180m from N to S.
(ACHIL94 30-2, 198)
Visited by RCAHMS (PJD) 12 May 1994

An oblique aerial photograph, taken in 1994, copyright RCAHMS, attached to the Canmore record displays the extent of lazy beds in this area. The plotting of the extent of the lazy beds was altered using this source. <1><2>

Photographs showing the extent of the lazy beds in this area were forwarded to the HER in November 2010. <3>