The remains of a wolf trap as depicted on the first edition Ordnance Survey map of 1875. 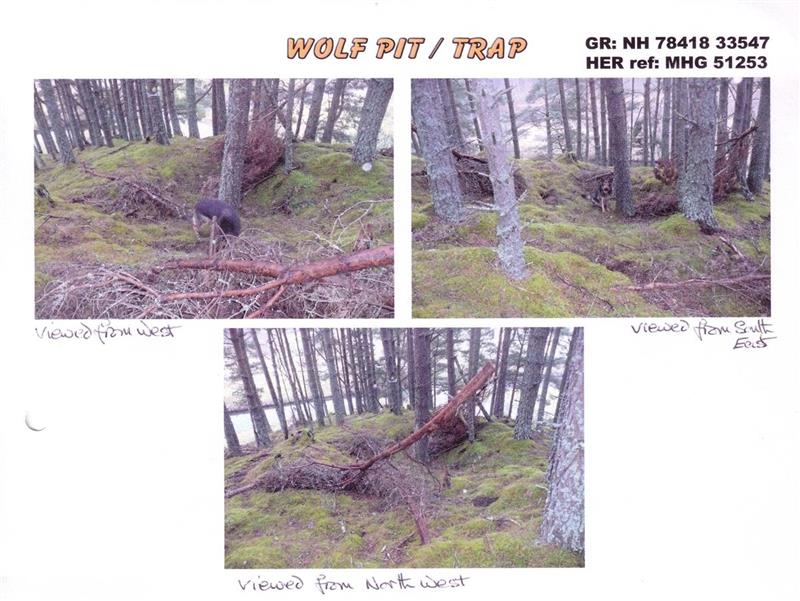 The putative remains of a wolf trap as depicted on the 1875 OS map <3> have been identified by Brian Duff (FCS). The site is called Site 3 in accompanying photograph and description. <1>

The Statistical Account of 1838 for Moy and Dalarossie Parish states that "There are no other animals any way remarkable now existing; but there are numerous indications of the wolf, chiefly in the traps formed for taking them". It describes the operation of these traps thus: "The method of taking this animal practised in the Highlands was as follows. A large deep hole was dug in some place frequented by the wolf; half way across the mouth of the pit a broad plank was projected, about half of which lay upon the ground, and had upon the end farthest from the pit a weight sufficient to balance the wolf, until pretty far advanced above the pit; on the other end was placed the bait, and the remainder of the pit was covered over with brush-wood, so as to deceive the animal. The wolf then advanced to the bait along the plank which, when he overbalanced the weight on the other end, immediately fell in, and he was precipitated into the pit. Numerous remains of these pits are still in existence." <2>

Wolf traps in this area are described in a volume of the Transactions of the Inverness Scientific Society and Field Club:
"Along the west side and south end of Loch Moy, and in various parts of the hill grounds of the district there are to be seen round pits of a few feet in diameter, dug in the ground, but now of course not so deep as they were. Tradition says these are marks of wolf-pits or traps. Six or seven of these are to be seen within a few hundred yards of Loch Moy, on the south side of it". The article then goes on to quote the Statistical Account above. <4><5>

Wolves may not have survived in Scotland beyond the 17th century (Harrison 2012). The Statistical Account for Moy and Dalarossie published in 1793 makes no mention of wolves, instead noting that ‘foxes are very numerous overall in this county and very destructive to sheep and poultry. Of late years, a fox-hunter has been hired by the neighbourhood to destroy them’ (v8, 502). This may be a more plausible explanation for the high number of well-preserved animal traps in the area (see MHG51251-2, MHG60711-2). <6>