An occupation site, including a hut circle, dating to between the late Bronze Age to the Middle Iron Age at Coille Gaireallach, Skye. 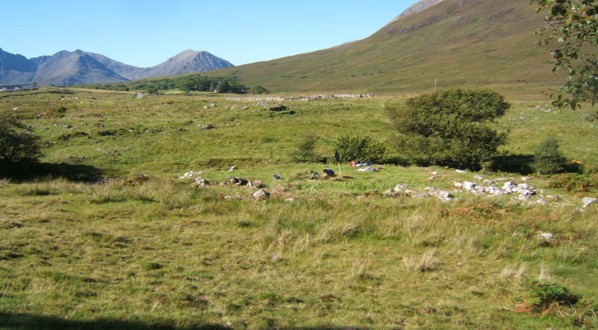 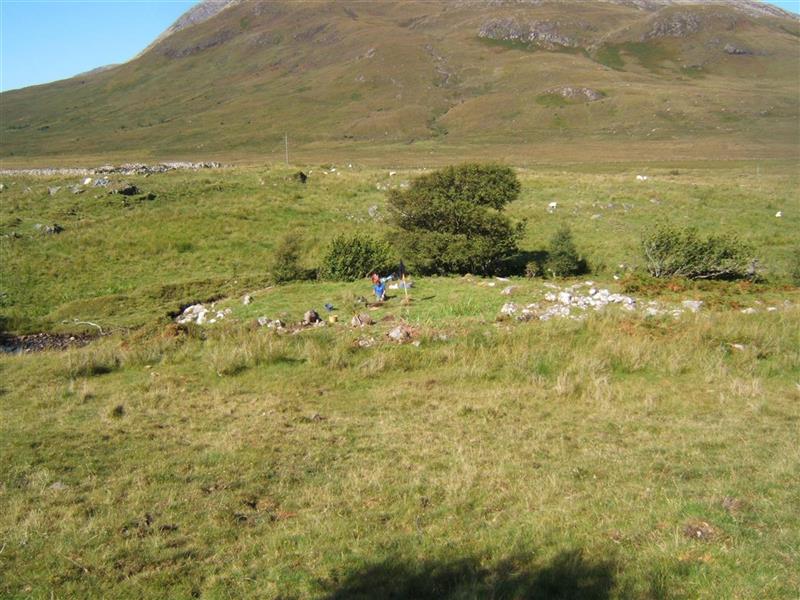 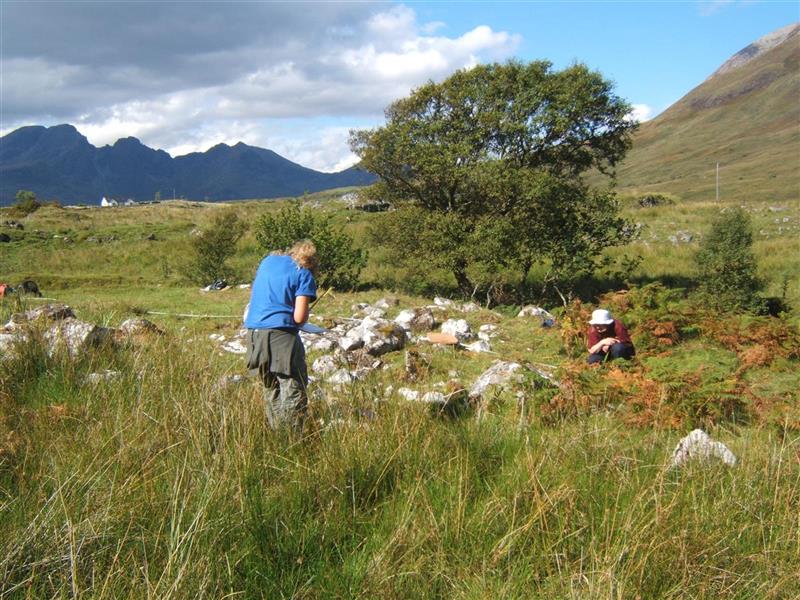 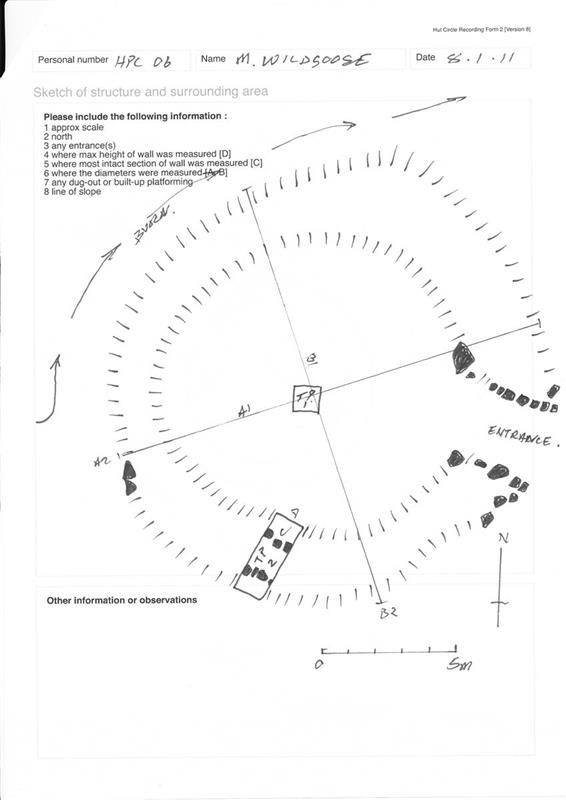 A hut circle (site LS06), one of 29 identified by M Wildgoose in a walkover survey as part of the High Pasture Cave and Environs project. The hut circle and an associated burnt mound (see MHG59428) were subsequently excavated in 2011, and dated to the Middle Iron Age (370-170BC). Finds included pottery, lithics, hearth slabs, charcoals, burnt bone and carbonised seed and a soapstone tuyure fragment.

The diameter of the hut circle was 14m, with a rubble-filled stone built wall of approximately 1.6m width. It is situated 30m above sea level, and has a SE facing entrance. A well preserved and complex group of structures lying beside a stream some 250m down slope and to the north east of High Pasture Cave at circa 30m OD. The remains consist of a circular enclosure 14m in overall diameter with a door opening which faces to the south east. A second elongated enclosure is attached to its east side. The stream which runs through High Pasture Cave system returns to the surface some 50m to the south west of the site and bounds the structure on its west and north sides. A small spring erupts from the limestone just to the east of the site. Short lengths of linear boulder boundary survive on the hillside to the east and south sides of the site. Excavation of TP1 uncovered a segment of a central slab hearth associated with Middle Iron Age pottery sherds which overlay an earlier pit hearth associated with possible Late Bronze Age/Early Iron Age pottery sherds. The wall, (TP2) where it survived, was some 1.60m wide overall and consisted of boulder facings with a rubble and earth fill. There were no occupation horizons abutting the inside face of the wall. A small post hole was found to underlie and to therefore predate the wall. Charcoal samples collected for dating produced a Middle Iron Age date for the central slab hearth.

A third test pit (TP3) placed in the centre of the attached enclosure revealed a mass of burnt and shattered pebbles (burnt mound). A single sherd of Late Bronze Age decorated pottery, a fragment of a steatite (soapstone) tuyere and a quantity of iron slag were recovered from the exposed burnt mound material - the last two indicators of metal smelting close by. A later extension of this test pit to the south demonstrated that the burnt mound had been levelled sealing a collapsed sandstone slab tank which had been constructed within a cut into the local natural (Karstic clay) and that the enclosure wall overlay the burnt mound spread and was therefore later in date.

Site LS06 was later selected for more extensive study and two apposing quadrants (North & South) were excavated in 2011. Excavation demonstrated that the site had seen extensive use at the end of the Bronze Age or perhaps the beginning of the Iron Age when the central pit hearth and an arc of posts within the northern quadrant were constructed. A single post found in Test pit 2 also belonged to this period and may represent part of an enclosure fence. The adjacent stone tank and burnt mound also date to this time. At a later date, perhaps during the Early to Middle Iron Age, the circular, stone walled, enclosure was constructed sealing the post hole in Test Pit 2. A slab hearth was also laid over the remains of the pit hearth. An activity horizon containing small abraded Middle Iron Age pottery sherds then accumulated sealing the earlier post holes in the northern quadrant. Subsequently the associated burnt mound was levelled concealing the tank and the rectangular enclosure was constructed over the spread burnt mound material and against the east side of the circular enclosure. It is possible that the circular structure was robbed of movable stone at this time. There was no evidence that the circular enclosure was roofed during the secondary activity (there were no contemporary post holes) and it is likely that the site served some other purpose — perhaps, initially, as the burnt mound and tank might suggest, as a forerunner to the High Pasture Cave site, and latterly perhaps as an animal enclosure related to the adjacent enclosure system before going out of use when the associated rectangular enclosure was constructed. <1>

See also <2> for a summary of the landscape survey project and test pitting campaign. <2>

159770 819880 Coille Gaireallach 2 HPC06: The hut circle was visited by revisited and recorded by M Wildgoose in 2011 as part of research for a dissertation on hut circles in Wester Ross for A Welti. This was part of a degree course overseen by Aberdeen University. This is one of a number of prehistoric roundhouses in the area in and around Strath Suardal. This Strath runs NE/SW from Broadford to Torrin. These roundhouses are of special interest as all are within relatively easy reach of the site of High Pasture Cave (see MHG32043) and hence are likely to have been associated with it. HPC06 is a circular stone structure in poor condition. The platform sits on level ground and is built up from the surrounding land. The site is around 100m north of the woodland area, Coille Gaireallach and has a northwestern aspect. A stream runs around the west and north sides of the HC, at a distance of 1.0m from the embanked wall. The structure is adjacent to an enclosure. Surrounding vegetation is mainly grass with some woodland. Vegetation within the HC is entirely grass. Few stones are evident, except for some outer facing stones in the northwest arc and a series of clearly placed facing stones at both sides of the southeast facing entrance. Average internal diameter is 10.75m, outer diameter is 16.0m. The double skinned wall is 2m thick with maximum height 0.53m. It is built with boulder orthostats and rubble fill. The probable entrance faces southeast with internal and external width 2.5m, and passage length 3.0m. HPC06 is approximately 400m from HPC14 (see MHG59526) in the Coille Gaireallach woodland. It is at a distance of 170m from High Pasture Cave. This HC was test-pitted by Martin Wildgoose as part of the High Pasture Cave and Environs project, and further excavations (see EHG5237) of two opposing quadrants were undertaken (see MHG59428 for the burnt mound found under the enclosure). Evidence of occupation from the HC included a flint chunk, burnt bone, a pottery sherd and charcoal. Two C14 Dates were obtained; under the slab hearth a Middle Iron Age date, (370-170 BC,), which pre-dates the earliest date for use of High Pasture Cave, and under the enclosure wall, Early Medieval (AD664-778). <3> <4>

The site was included in the ARCH Broadford Community Project. <5>