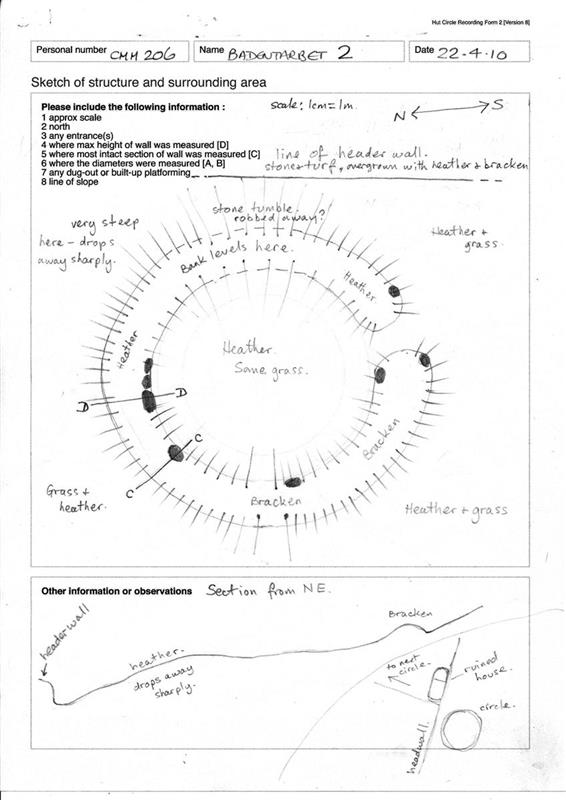 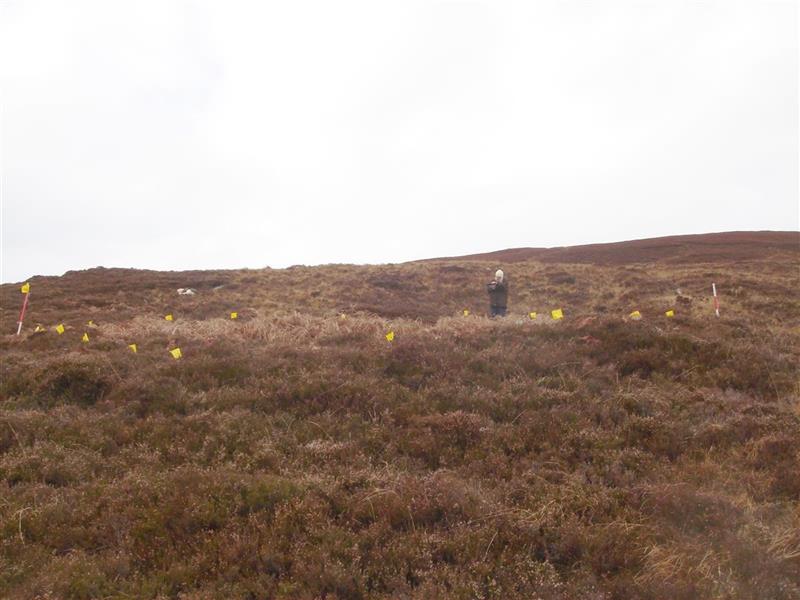 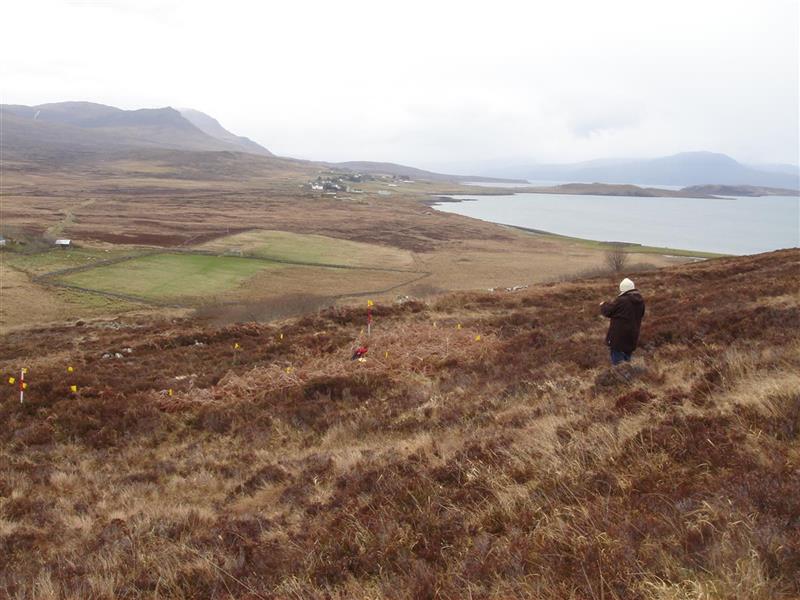 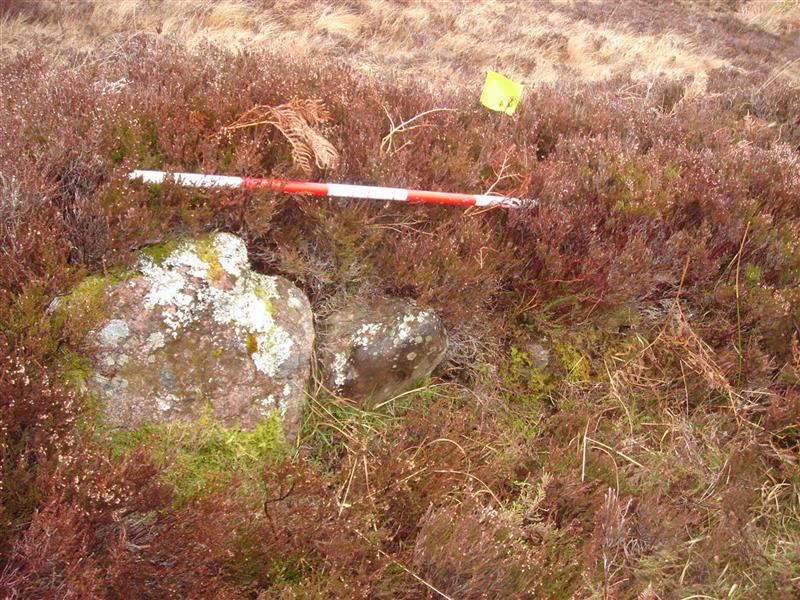 One of a number of hut circles at Badentarbat near Loch Vatachan. Originally recorded by RCAHMS as ACHIL94 416.

NC01SW 24.02 0094 1035
At NW edge of Badentarbat township there are three hut-circles, a scatter of small cairns, short lengths of lynchet and stretches of bank on an E-facing hillside now covered with heather and bracken. One hut-circle lies within the township head-dyke (ACHIL94 414; NC 0100 1031). The ESE half of this hut has been robbed out, and lazy-beds overlie the line of the wall on that side, but the WNW half survives, set into the hillside and measuring 8.2m NNE-SSW within a stony bank spread to 2.1m in thickness. Part of the inner face survives on the SW. The second hut-circle is about 60m to the NW, just beyond the head-dyke at NC 0094 1035 (ACHIL94 416). This measures 8.1m in diameter within a wall 0.9m thick and up to 0.6m high. It has been set into the slope on the uphill (W) side, and terraced out on the E, and there is a gap on the ESE which may mark the entrance. The third hut is situated about 270m to the NNE, above and to the W of the NW corner of the head-dyke (ACHIL94 418; NC 0106 1060). It measures 7m in diameter within a stony bank spread to 1.4m in thickness and standing 0.9m high on the W where the hut has been set into the slope. The entrance is on the E, where the wall thickens to 2.6m. The small cairns, banks and lynchets occur in a band measuring about 650m N-S by up to 150m E-W, partly outwith the township head-dyke but mostly within it, extending as far S as NC 0099 1005. The banks and lynchets are extremely fragmentary, but about 30 small cairns were identified beyond the head-dyke and about 40 within it. While many of these features are likely to be contemporary with the hut-circles, part of a band of prehistoric settlement which continues N along the slopes above Loch Vatachan (NC01SW 4 and 7), at least some of them may be of a later date, associated either with the round-ended building at NC 0105 1053 (NC01SW 24.03) or with the establishment of the lazy-beds within the head-dyke. (ACHIL94 414, 416, 418) Visited by RCAHMS (SDB) 8 August 1994

200942 910341 Loch Vatachan Badentarbat 2 CMM206 (RCHAMS ACHIL94/416): The hut circle was visited by A Welti and C MacNeilage in 2010 as part of research for a dissertation on hut circles in Wester Ross. This was part of a degree course overseen by Aberdeen University. This circular stone structure was classified by RCAHMS in 1994 as one of a group of three sited near to the head dyke. Associated field systems, clearance cairns and lazy beds are present in the landscape but are hard to distinguish in 2010 due to vegetation growth, mainly heather and grass. The structure lies on a moderate southeast facing slope a few metres above and to the west of a head dyke overgrown with heather and bracken. A stream runs 200m distant and the structure is 600m from a freshwater loch. There are panoramic views westward to the Assynt mountains. The platform, which falls away sharply on the north eastern side, is dug into and built out from the slope. The walls of the structure are submerged partly by heather, partly by bracken. The ring bank and some facing stones are visible. Average inner diameter is 8.0m, outer diameter is 12.15m. The double skinned wall is 1.5m thick with maximum height 0.6m. The probable entrance faces SE, with width internally and externally 1.0m. The passage length is 2.5m, indicating extended terminals. CMM206 may be associated, in a linear cluster along similar contour lines,with CMM207 (see MHG24525) (distant 70m), CMM208 (see MHG) (distant 270m), and CMM 209 (see MHG) (distant 10m), as well as with the clusters of structures on the slopes to the north (see MHG26621, MHG57311, MHG57312, MHG57313 and MHG26622.) <1> <2>