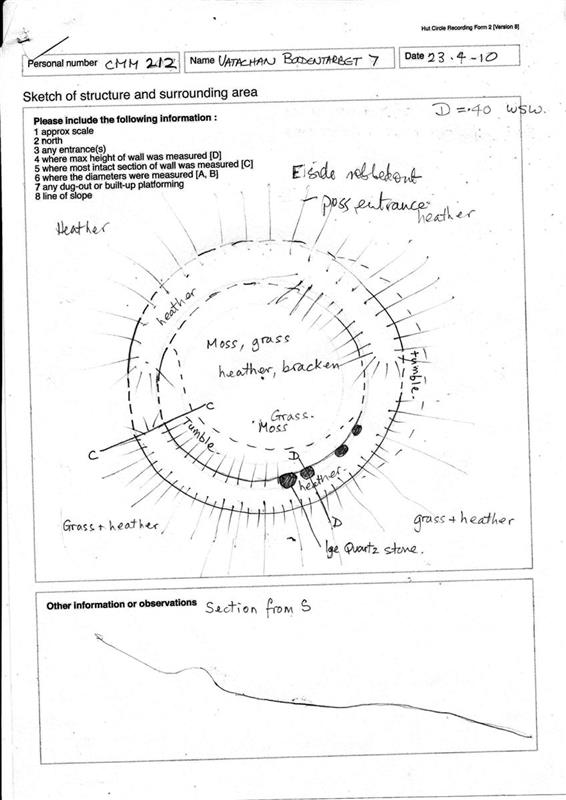 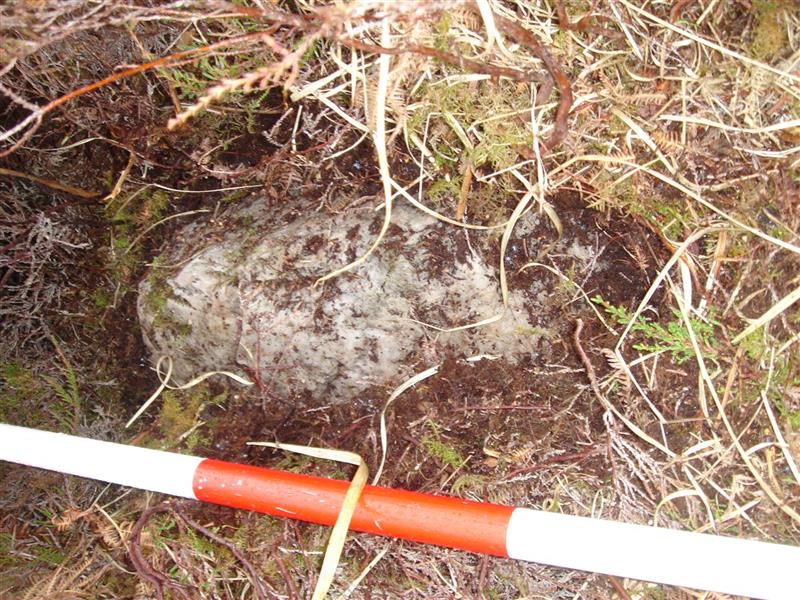 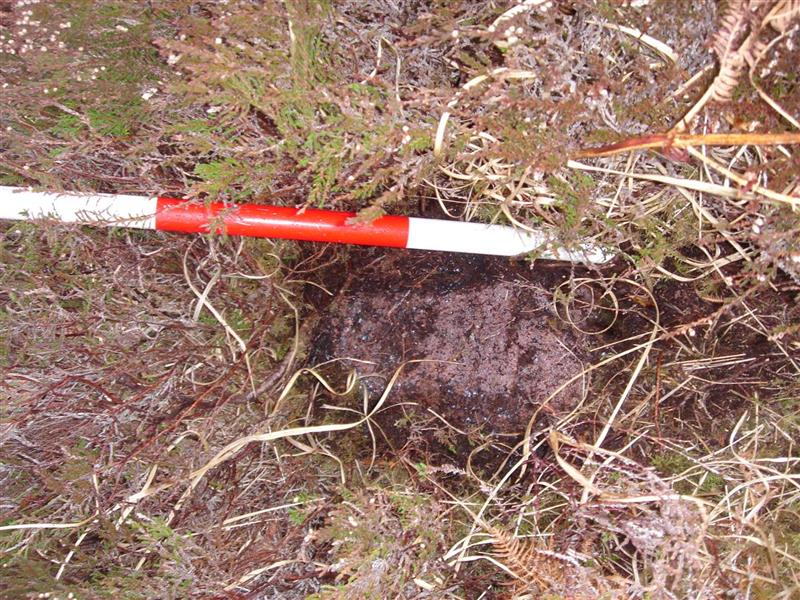 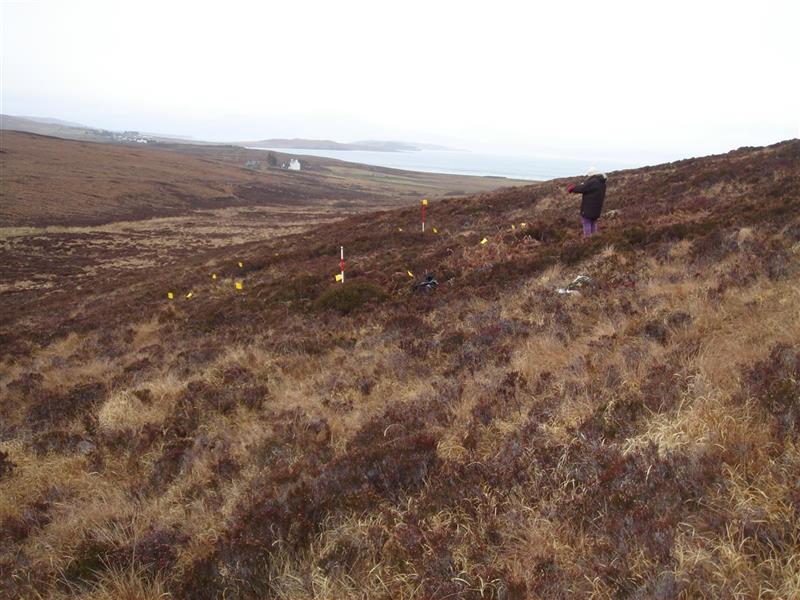 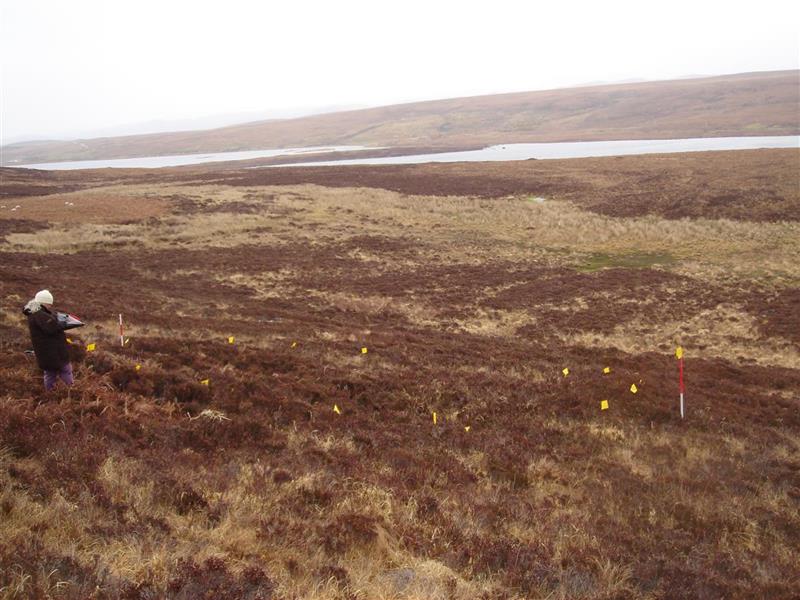 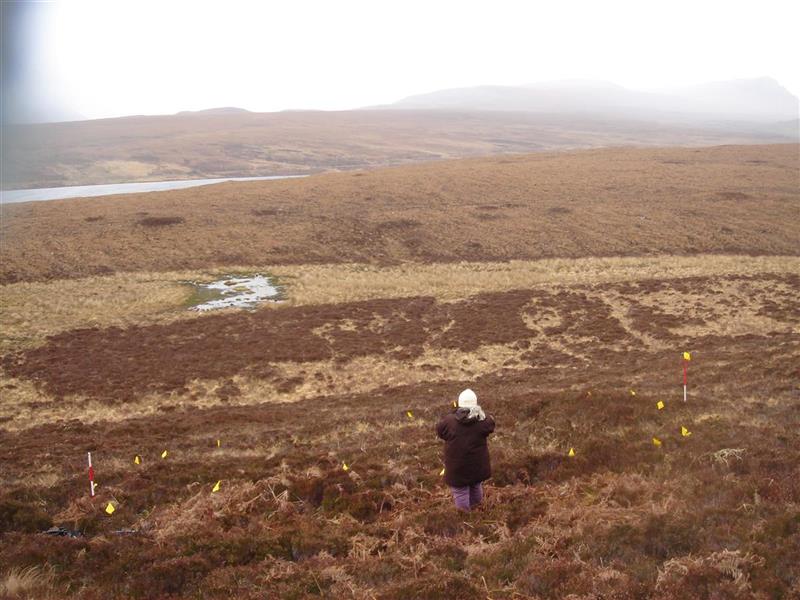 One of a number of hut circles at Badentarbat near Loch Vatachan. Originally recorded by RCAHMS in 1994 as ACHIL94 448.

There are four hut-circles terraced into the bracken- and heather-covered hillside above the W shore of Loch Vatachan. They are situated between the 45m and 70m contours, disposed in a rough arc about 450m long. The northernmost hut (ACHIL94 452) stands on the N bank of the Allt Braigh an' t Stratha at NC 0103 1116. It measures 9.3m ESE-WNW by 7.3m within a faced bank 0.5m high and spread to a thickness of 1.6m. Some inner facing-stones survive, particularly on the uphill side. The second hut is stands on slightly lower ground about 300m to the SSE of the first (ACHIL94 448, NC 0108 1088). The wall does not survive on the SE (downhill) side but it appears to have measured about 10.5m in diameter over a bank now spread to 1.5m in thickness. Inner facing-stones survive on the NW, where the hut has been set into the slope. There is a much smaller hut-circle about 30m to SW of the second hut (ACHIL94 447; NC 0106 1085), measuring only 4.8m in diameter within a bank 0.6m high which has spread to 1.2m in thickness. Again, occasional facings survive on the uphill (NW) side. The final hut-circle, another 150m to the SW at NC 0094 1078 (ACHIL94 419) is oval on plan, measuring 9.2m N-S by 7.9m transversely between crests of a stony bank with an entrance on the SE side. On the slopes between these hut-circles, particularly around the northernmost one (ACHIL94 452), there are disjointed fragments of bank and a dozen small cairns, which may be the last vestiges of a field-system comparable to that around the hut-circles a short distance to the N, described under NC01SW 24. (ACHIL94 419, 447-8, 452)
Visited by RCAHMS (SDB) 10 August 1994

201081 910879 Loch Vatachan Badentarbat 7 CMM212 (ACHILL94/448): The hut circle was visited by A Welti and C MacNeilage in 2010 as part of research for a dissertation on hut circles in Wester Ross. This was part of a degree course overseen by Aberdeen University. This circular stone structure is in poor condition. It was classified by RCAHMS in 1994 as one of a group of four HCs terraced into the east facing slopes above Loch Vatachan. These are part of a cluster of HCs sited along similar linear contours over a distance of nearly 2000m north of Badentarbat. (See also MHG24525). Associated field systems, clearance cairns and lazy beds are present in the landscape but are hard to distinguish in 2010 due to vegetation growth, mainly heather and grass. Field boundaries of heather covered turf and stone meander around the area. Within these walls are areas of bracken, and later lazy beds to N. The structure lies near the foot of a moderate east facing slope, on the edge of a flat marshy area. The platform, dug into and built out from the slope, has slumped. It is 100m from a stream and 500m from the freshwater loch. There are panoramic views westward to the Assynt mountains. The walls of the structure are submerged in heather and bracken. The E side of the HC is robbed of stone. The entrance is unclear but may be in E, and a large quartz facing stone could be directly opposite this entrance (see sketch). Average inner diameter is 7.65m, outer diameter is 10.25m. The double skinned wall is 1.7m thick with maximum height 0.4m. CMM212 may be associated with CMM210 (see MHG26622) distant 150m, CMM211 (see MHG57317) distant 30m, and CMM213 (MHG57319) distant 200m, as well as with other HCs in the linear clusters north of Badentarbat. <1> <2>