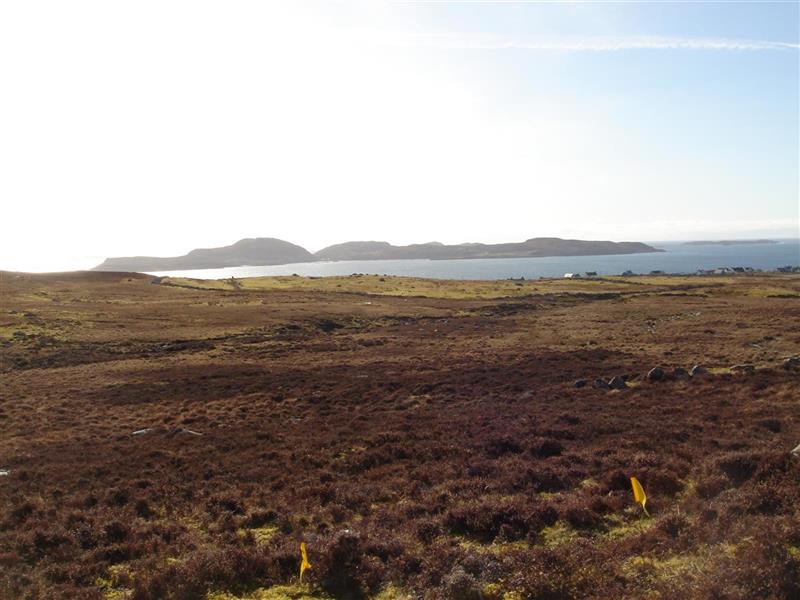 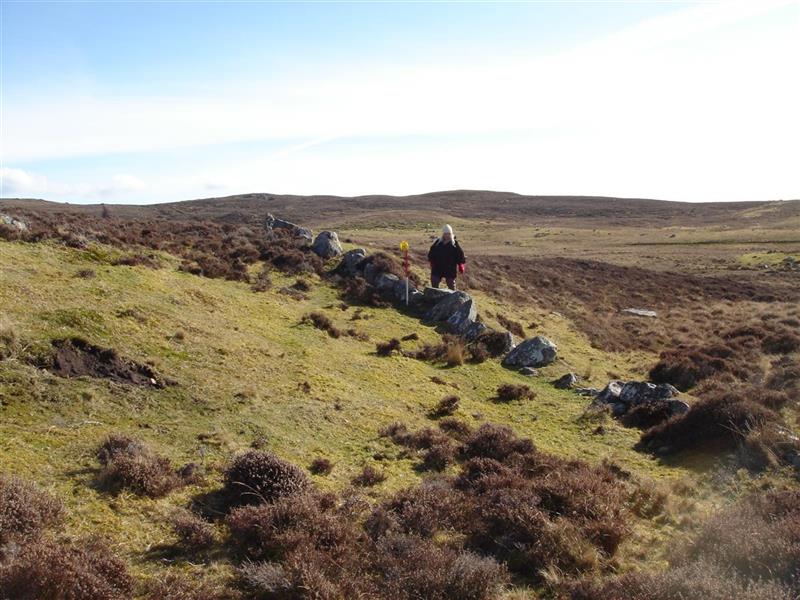 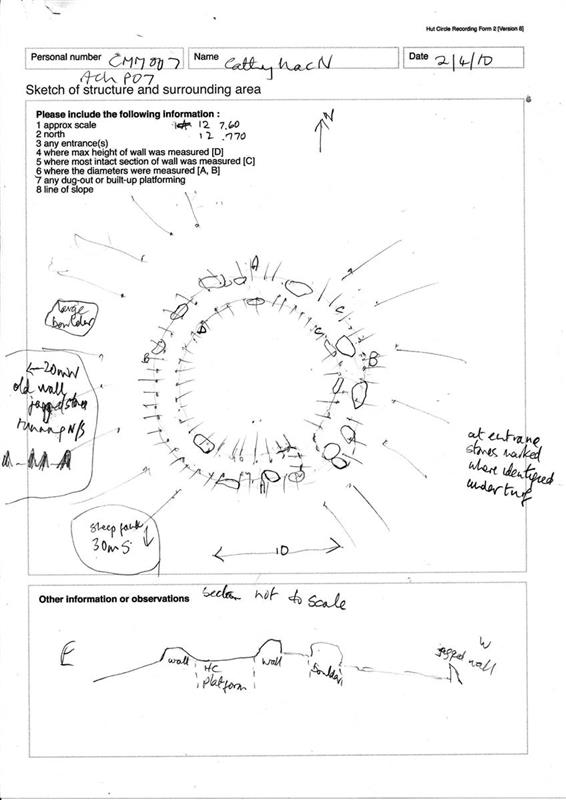 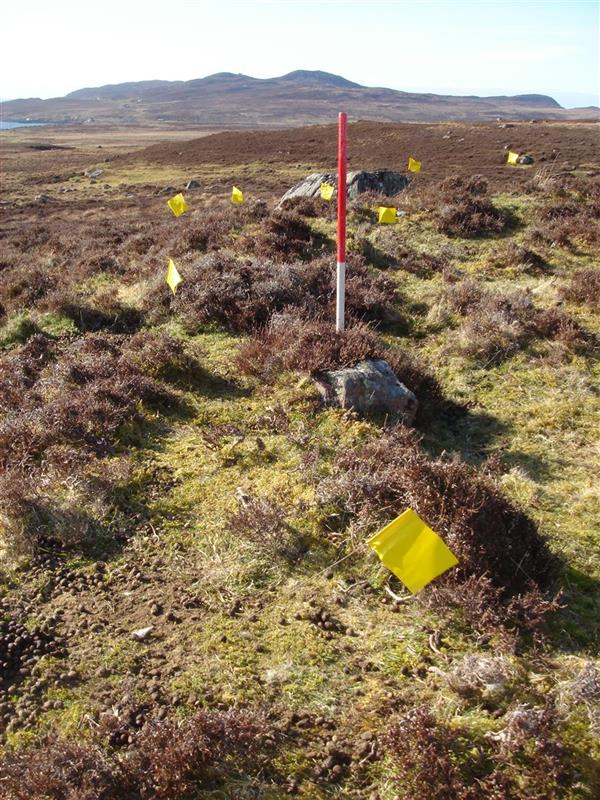 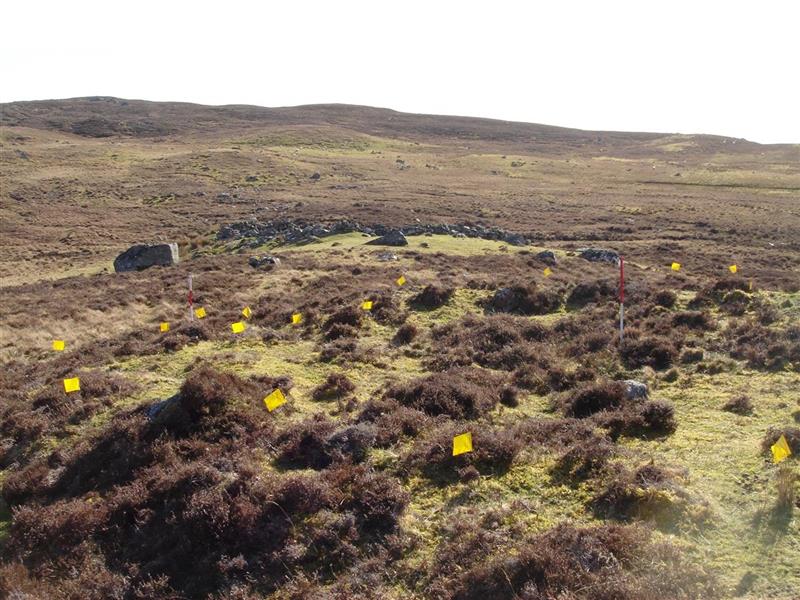 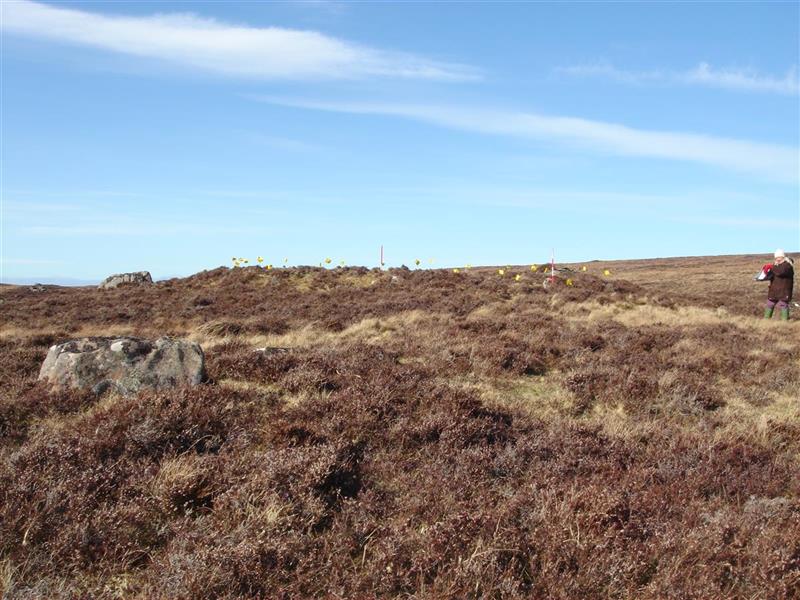 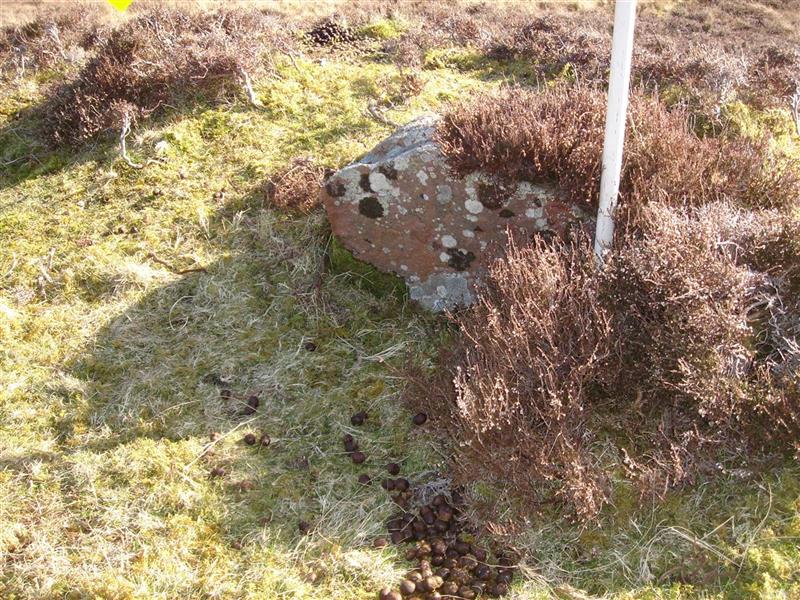 In the rough ground surrounding a post-medieval enclosure on the ridge, which is known as Bad a' Chotair, there are nine hut-circles which have previously been described under NC00NW 8, 9, 13, 14, 15 and 16. Four measure about 12m in internal diameter, one is 9.2m, and the remaining four are about 7.5m; all are surrounded by banks up to 1.5m in breadth and, where visible, the entrances lie on the S or SE. Two (ACHIL94 362, 378) have baffle walls at the entrance. What may have been other hut-circles, identified by the OS (NC00NW 16 B and D), were not located on the date of visit whilst a third (NC00NW 14 B) is no more than a small enclosure.
Juxtaposed, but not necessarily associated, with the hut-circles, there are numerous stretches of stony field banks and small cairns. The banks occasionally form enclosures or fields but are often little more than linear clearance heaps. The banks to the N of Bad a' Chotair were previously described under NC00NW 21.

As described above, RCAHMS has now merged a number of individual records. All the old Sites and Monuments Record cards can be viewed from this current record. <1>

203180 908818 Achiltibuie Post Office 7 CMM007 (ACHIL94375): The hut circle was visited by A Welti and C MacNeilage in 2010 as part of research for a dissertation on hut circles in Wester Ross. This was part of a degree course overseen by Aberdeen University. CMM007 is one of a cluster of 12 circular stone structures on gently sloping ground near to Alt Bad a Chotair. Field systems both ancient and more recent are visible, and there is a burnt mound close to CMM002 (see MHG57343). The terrain consists of well grazed rough heather/ grassland with marshy areas. All the structures have panoramic views both inland and to the sea and are around 2000m north of the broch at Achlochan. CMM007 consists of a clearly visible heather covered ring bank sitting on a platform built up from a natural terrace. Stones in the wall were identified by prodding the turf. Average inner diameter is 6.65m, outer diameter is 12.0m. The double skinned wall is 2.3m thick with maximum height 0.6m.The southeast facing entrance is 1.4m wide externally and 1.3m wide internally. Passage length is 1.9m indicating standard entrance terminals. 20m W of the HC an ancient wall of large slightly jagged stones runs N/S (see photo). This appears to be a continuation of the wall near to CMM004 (see MHG57351), CMM005 (see MHG57352), and CMM006 (see MHG57353).There is a substantial sheep fold 30m to S of HC. An uninterpreted structure diagonally opposite the sheep fold, and adjacent to the burnt mound on the W bank of the Alt Bada Chotair consists of a mound 20m x 15m, with a circular platform at its E end and another platform diameter 10m against its NW edge. CMM007 is distant 200m from CMM008 (see MHG), 300m from CMM002, and 400m from CMM006. <3> <4>