A hut circle or possible dun at Doir 'a' Bhaird. 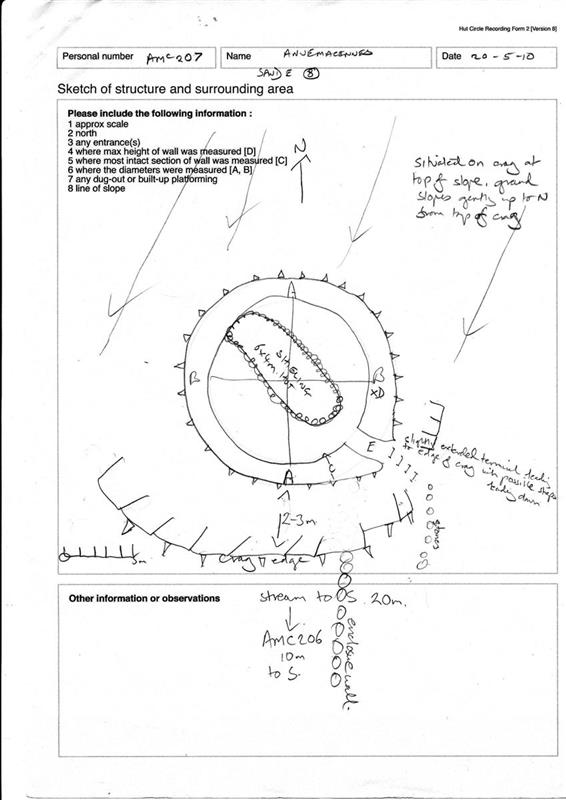 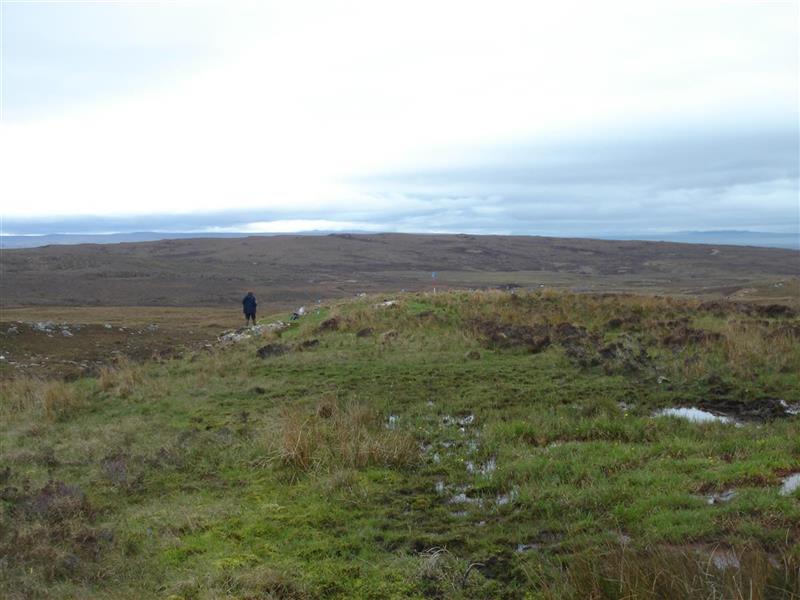 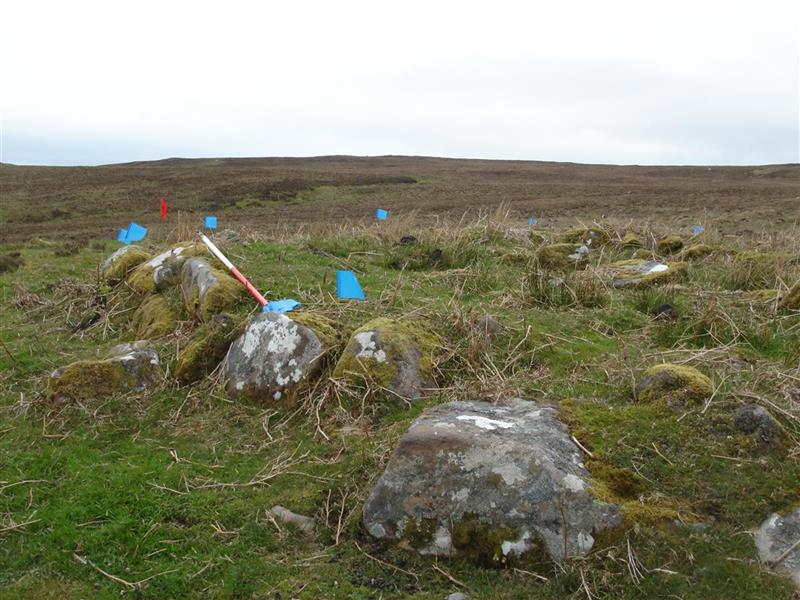 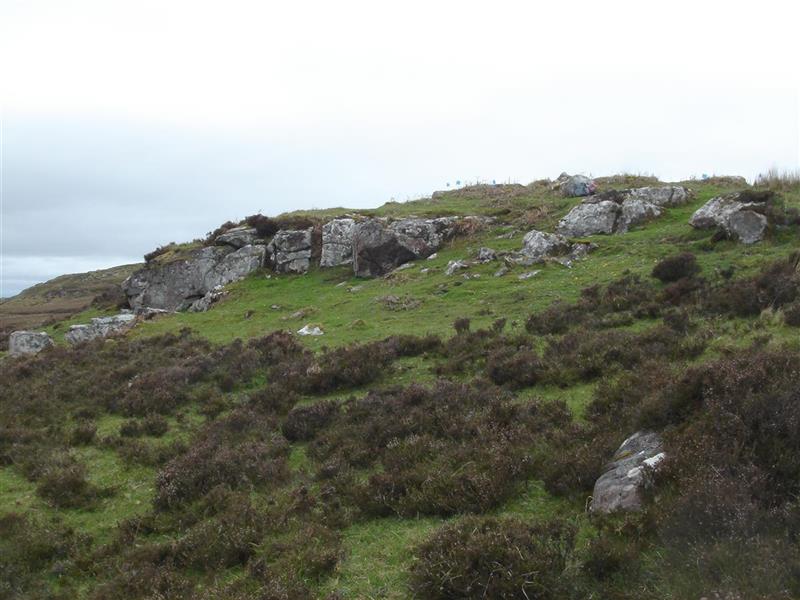 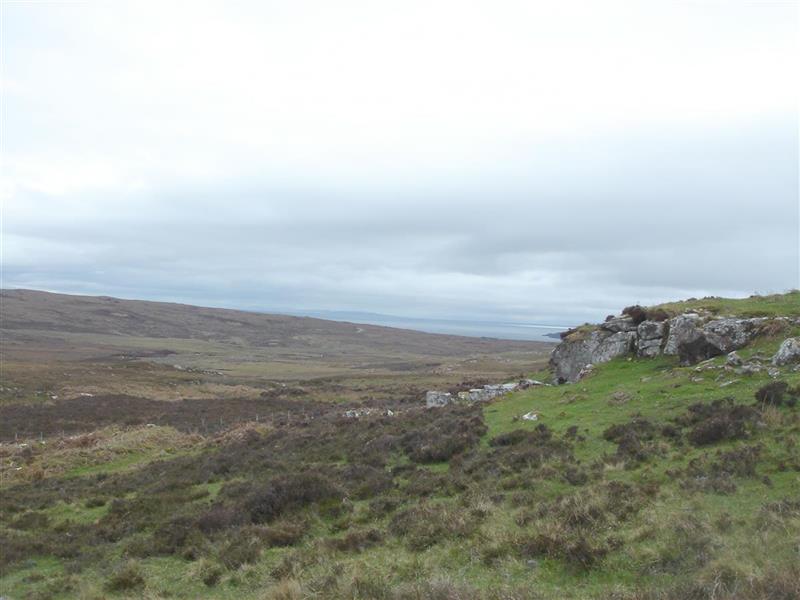 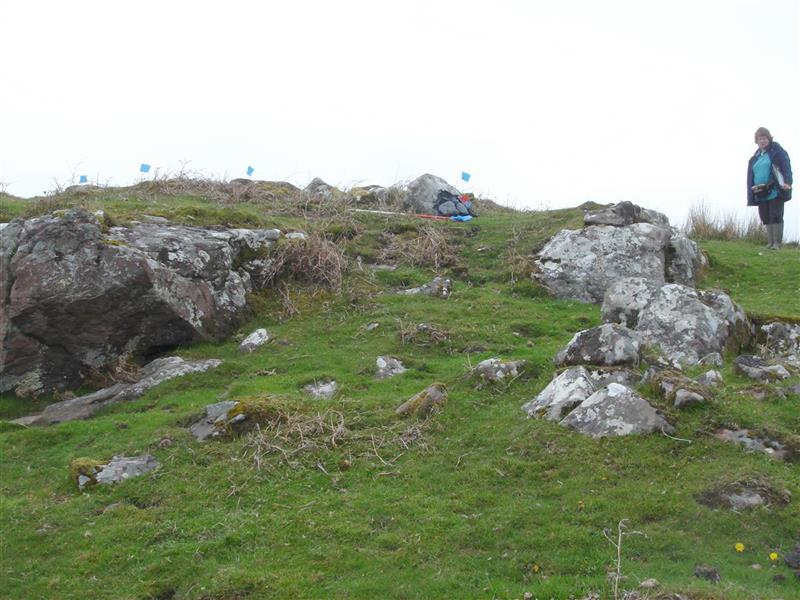 Hut circle or possible dun at Doir 'a' Bhaird.

177917 880922 Sand East 8 AMC207: The hut circle was visited by A Welti and A MacInnes in 2010 as part of research for a dissertation on hut circles in Wester Ross. There are over 30 probable hut circles in the area around Sand River and its tributaries. The land may have been especially fertile as, at the end of the Ice Age, the path of the ice retreat from the furthest points of the Wester Ross Readvance follows the areas of clustering of the recorded Sand River hut circles. The melting ice would have dropped many rocks of all sizes together with a variety of minerals. The landscape would thus have contained easily accessed building materials on fertile ground. AMC207 is a circular stone structure which sits in a prominent position on top of a rocky outcrop 10m to north of AMC206. The ground slopes gently northward from the top of the crag and the HC platform is built up from ground level. The structure is adjacent to the enclosure walls which abutt AMC206 (see MHG57423). A shieling 6m by 4m has been built inside the structure.The southern arc of the HC is 3m from the edge of the crag, 10m from AMC206 and 20m from a stream. There is a line of stones and indications of possible steps leading down towards AMC206 from the southeast facing entrance. This could be interpreted as a formal entrance 'way', and it is possible that the structure was a small dun. Average internal diameter is 7.15m, external diameter is 10.2m. The double skinned wall is 1.5m thick with maximum height 0.2m. The probable entrance faces southeast with external width 1.5m, and internal width 1.0m. Passage length is 2.0m indicating extended terminals. AMC207 is not in sight of AMC204 (see MHG57421), AMC205 (see MHG57422), AMC203 (see MHG57420), AMC202 (see MHG57419) and AMC201 (see MHG57418), but is approx 500m from both so may be associated with both clusters. The diameters of AMC205,AMC204 are smaller than those of AMC203, AMC202 and AMC201. AMC207 is distant 40m from JB300 (see MHG). There are 21 hut circles recorded in this survey of the area named Sand East. Most of the hut circles appear in clusters of two or three very close to one another which in turn are near to other small clusters of two or three. Association, based on distances between all these structures and clusters, is likely. Field survey alone, without dating, cannot provide answers. The clusters of two or three HC's are as follows: AMC200 with GS003, AMC201 with AMC202 and AMC203, AMC204 with AMC205, AMC206 with AMC207 and JB300, JB301 with JB302, JB303 and JB304, JB305 with JB306, JB307 and JB308, JB310 with JB311.Neither JB309 or JB312 have a close pairing. AEMC007 seems complex and different from the other structures. <1> <2>