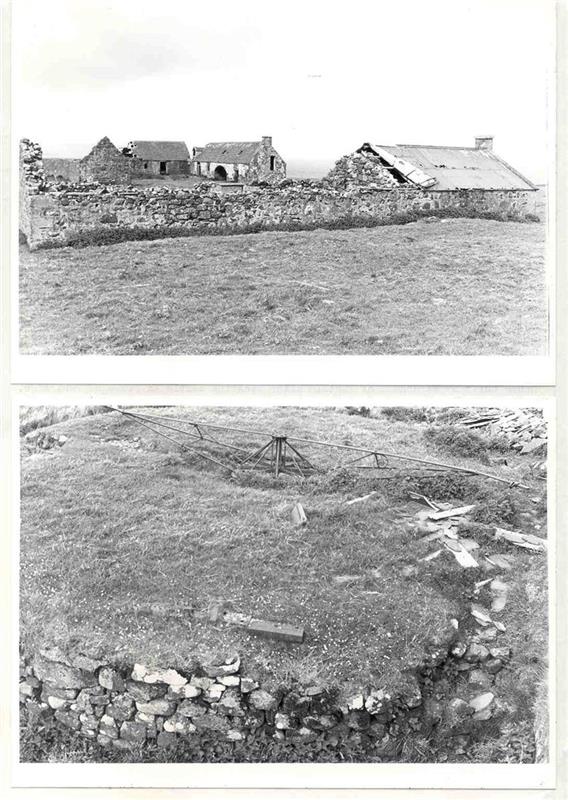 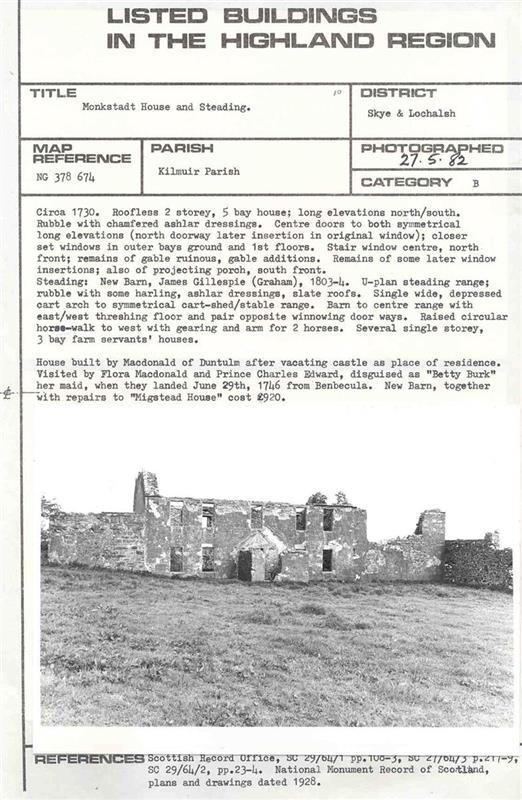 (NG 376 748) Monkstadt House, originally built in the second half of the 17th century as a dower house for the widow of Sir James Mor, was rebuilt c.1732 by Sir Alexander Macdonald as a replacement for Duntulm Castle (NG47SW 1), using that later place as a quarry for materials. Monkstadt House was vacated by the MacDonalds in 1798 and then became the dwelling of successive tacksmen of the adjoining lands.
A large part of the house is now a roofless ruin, but half of the main block is still inhabited. The old crow-stepped gable at the W end - the stones of which may have come from Duntulm - is still intact.
J Macintyre 1938. <1>

It seems that the earliest house at Monkstadt probably lay some distance to the west of the current building. The first reference to 'Moggstot' is in relation to Sir James Mor MacDonald who transacted business there in 1671. Sir Alexander began to build the present house in 1732; the old house continued to be occupied whilst the new one was being built (the building was completed in 1741). Mid 18th century masons acounts refer to the 'Beg' House with a basement and garret and 'Old House' and an array of other buildings. For a plan of Monkstadt House and gardens, etc at 1764 see 'Plan of the Parish of Kilmuir and Uigg in Trotternish lying in the Isle of Sky and County of Inverness. The Property of Sir James MacDonald Baronet. Surveyed by Matthew Stobie 1764' (held by Clan Donald Lands Trust, Armadale). Further detailed proposal plans dating to the first half of the 20th century are held in the NMRS. The 1732-41 phase of the house is thought to contain fireplaces said to have originated from Duntulm Castle. The house also preserves evidence of post-1764 work - eg when a wing was raised from one to two stories. <2>

A planning application was submitted in 2005 to rebuild the remains of Monkstadt House as a family house <4>. It was not believed that archaeological evaluation within the building footprint would yield further information about the former internal layout of the house. <3>

The house was abandoned in 1956, and its roof was subsequently sold. It stood as a roofless ruin, as was entered onto the Buildings at Risk Register, maintained by The Scottish Civic Trust, in December 1993. It has subsequently been restored to a private dwelling, and was removed from the register in 2010. <5>