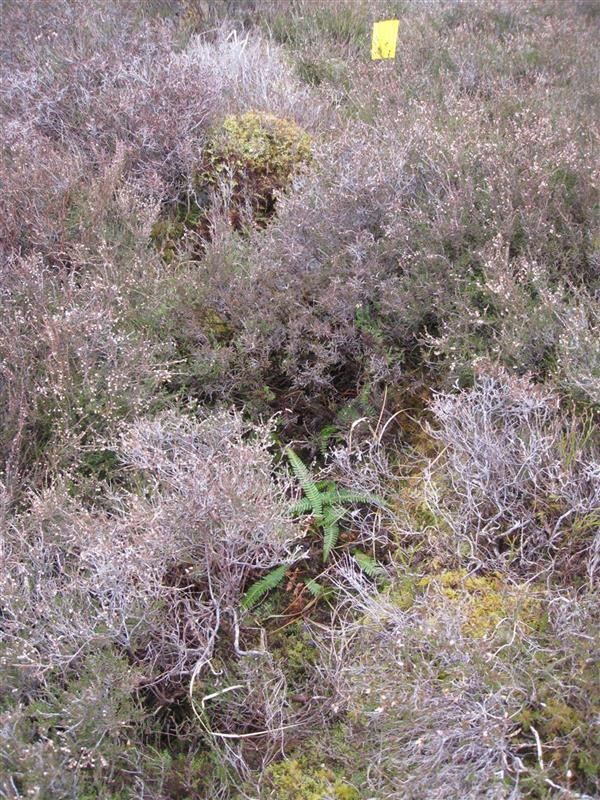 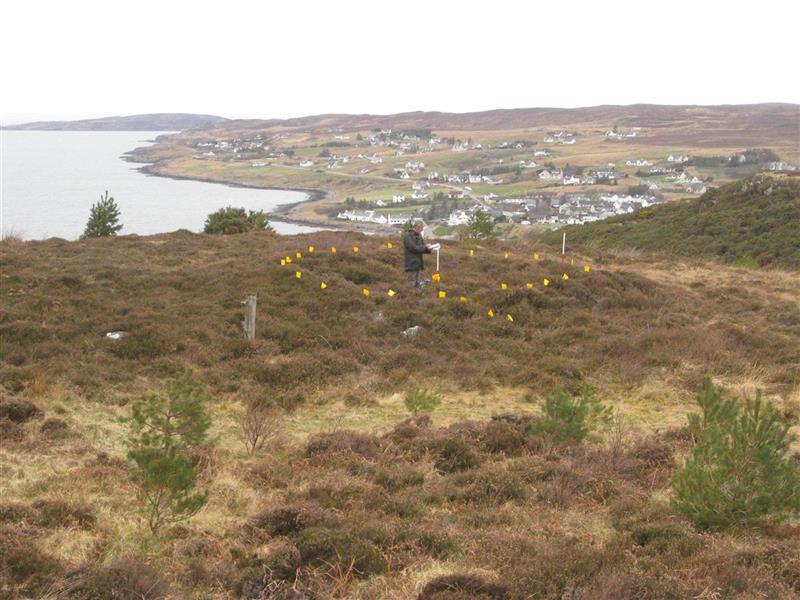 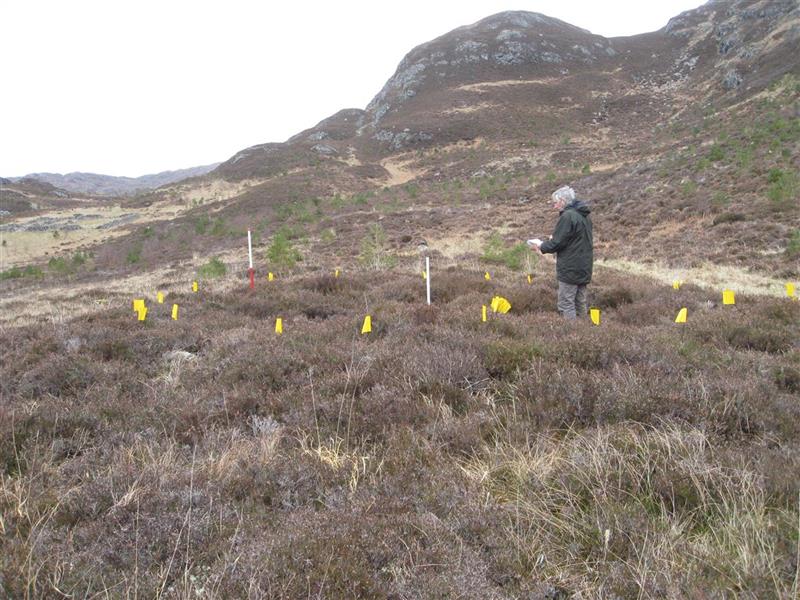 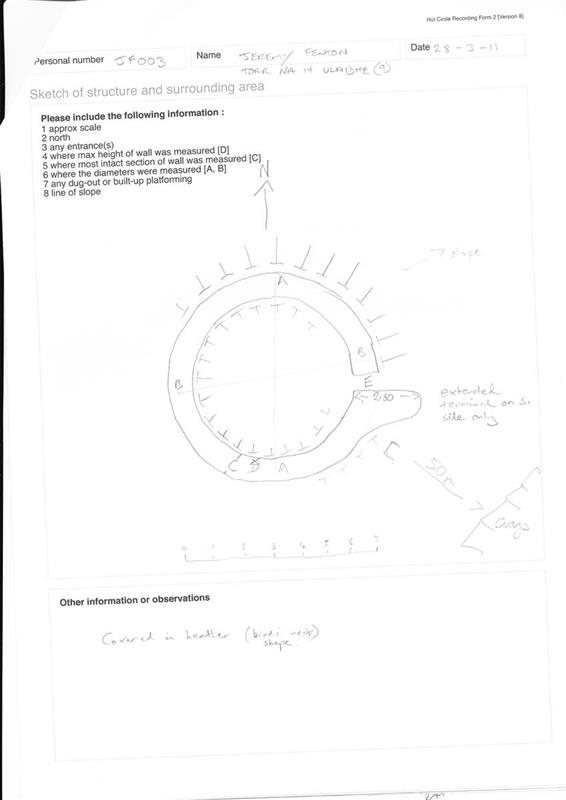 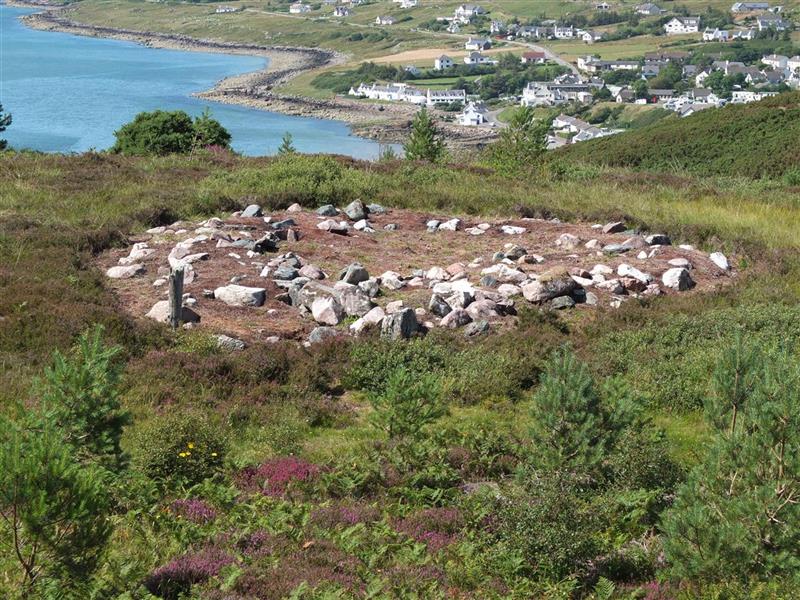 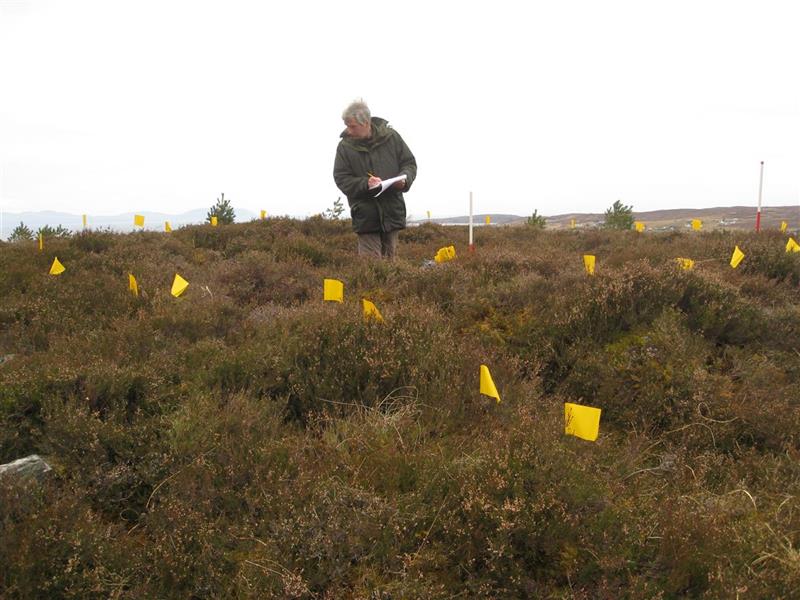 180774 876933 Torr Na H-Ulaidhe 9 (Auchtercairn R1) JF003: The hut circle was visited by A Welti and J Fenton in 2011 as part of research for a dissertation on hut circles in Wester Ross. This was part of a degree course overseen by Aberdeen University. This HC is one of 10 circular stone structures in the Auchtercairn area above and to the east of Gairloch. JF003 lies on a platform built out from a very gentle north facing slope, 50m to the west of steep crags. From the site there are panoramic views inland and to the sea. The wall boulders are coloured; green amphibolite, brown sandstone and grey gneiss. They seem to have been placed with a regard for the colour. The site is 150m from a stream and 500m from the sea. The surrounding landscape is covered with a mixture of heather and grass with some bracken. The interior of the structure is almost entirely heather with some moss. In the surrounding area there are field boundaries of turf and stone. From the site there are panoramic views to the sea. Average internal diameter is 5.4m, external diameter is 7.35m. The double skinned wall is 1.0m thick with maximum height 0.35m. The probable entrance faces east with interior width 0.8m, exterior width 0.8m and passage length 2.8m.There is a clearly visible extended terminal on the southern side of the entrance. JF003 is 20m from JF002 (see MHG59292). <1> <2>

This HC was excavated as part of the Wedigs project in 2013. A single trench was dug right across the structure. The interpretation was that this roundhouse had at first had an earth or turf bank with a ring of upright posts some 1.5m inside it. On this turf bank was later built a stone wall, and a new clay floor was made, truncating the earlier postholes. Later, when the roof had gone, a stone built hearth was built and used within the structure for some unknown purpose. Charcoal from the central hearth associated with the later stone walled house gave a C14 date of 2676±29 BP (GU30616) This is 726±29 BC, Late Bronze Age. A light use pounder was found in context 1 10 and two halves of a sandstone rubber which had been later used as a potboiler were found in context 16 These are consistent with the Late Bronze Age date. Pollen Analysis was carried out by S Timpany of UHI. Peat at the 3cm level of the Kubiena sample from Trench 3 gave a post-medieval radiocarbon date of 1637± 30 AD (GU 35220). The pollen sequence does not therefore relate to the archaeology of the roundhouse. However the pollen gives interesting landscape information for this later period. Anthropogenic activity is observed in the pollen record from 3cm onwards within the Achtercairn 2 sequence, signalled through an increase in burning activity, some loss of woodland and the appearance of cereal pollen, which indicates the cultivation of hulled barley. <3> <4> <5>

The finds from the Wedigs excavations at Achtercairn are in Gairloch Museum. <7>