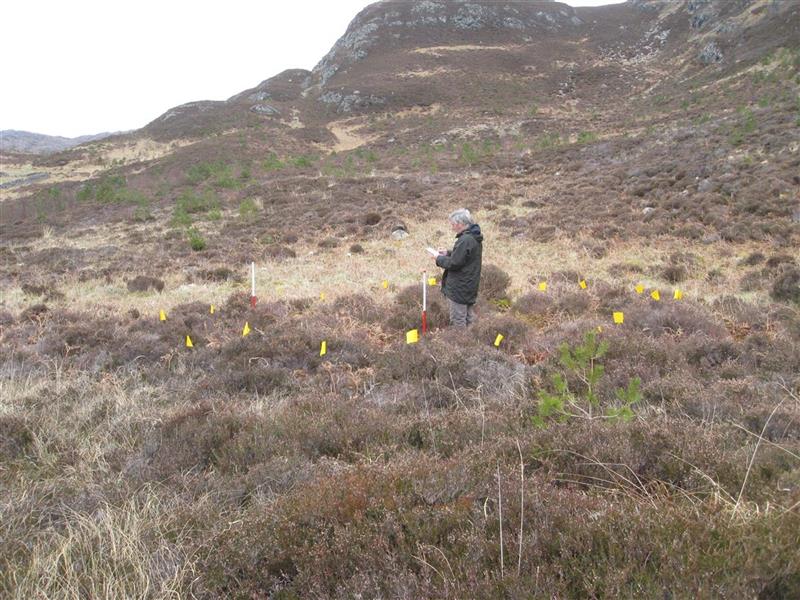 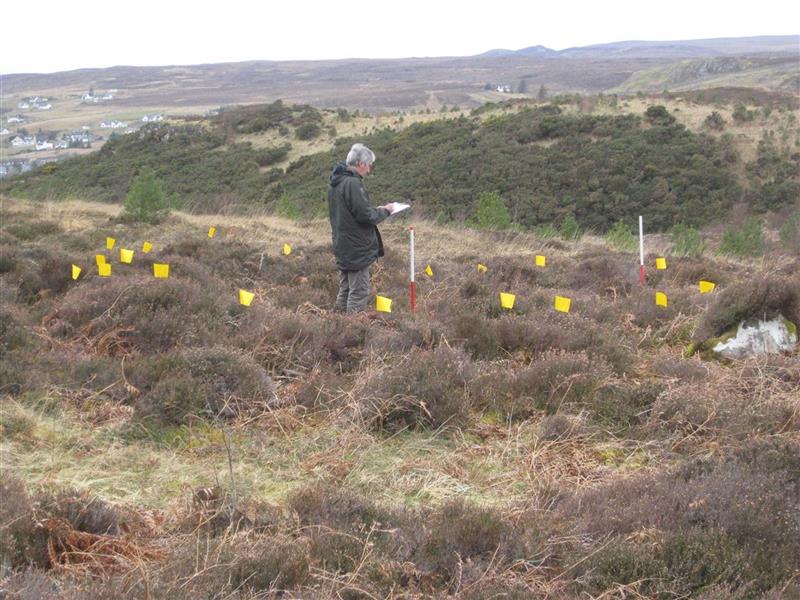 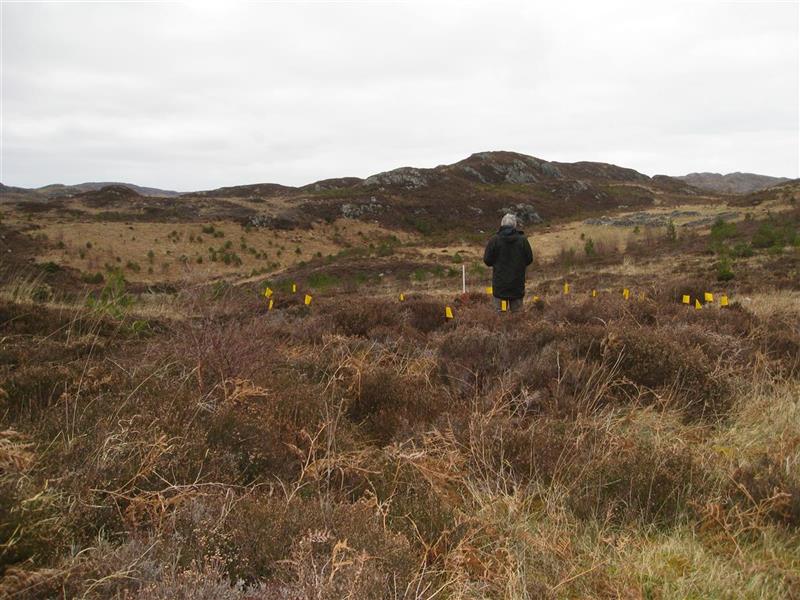 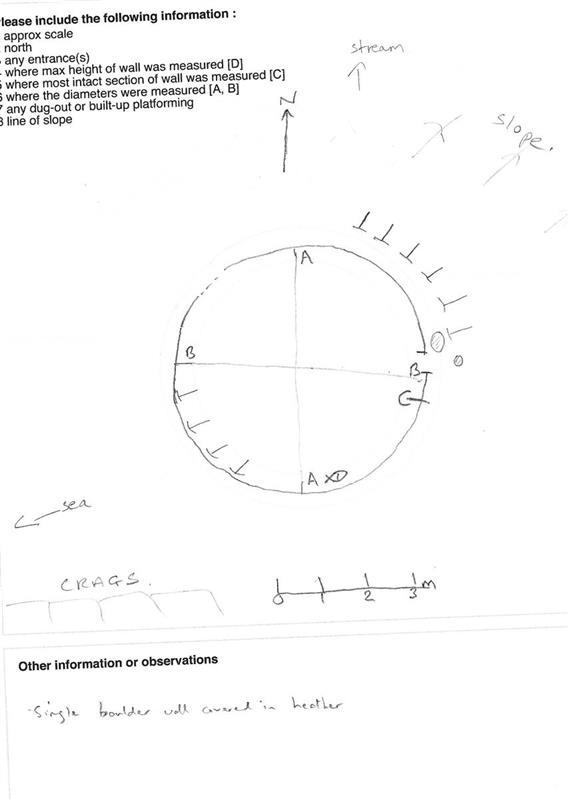 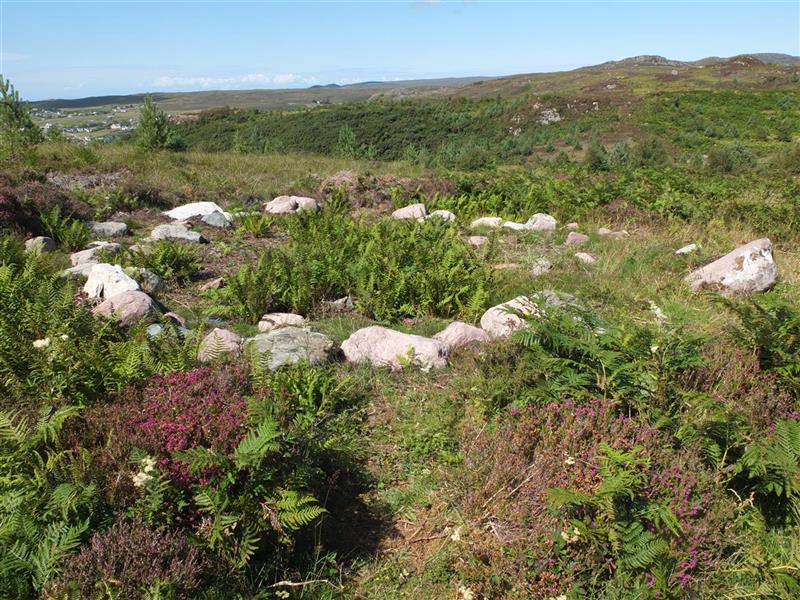 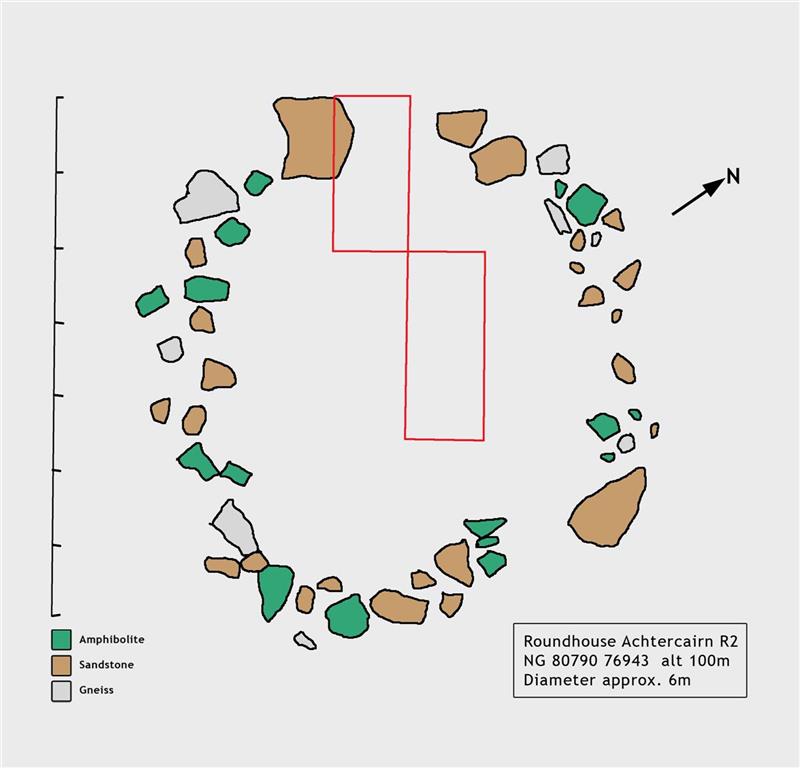 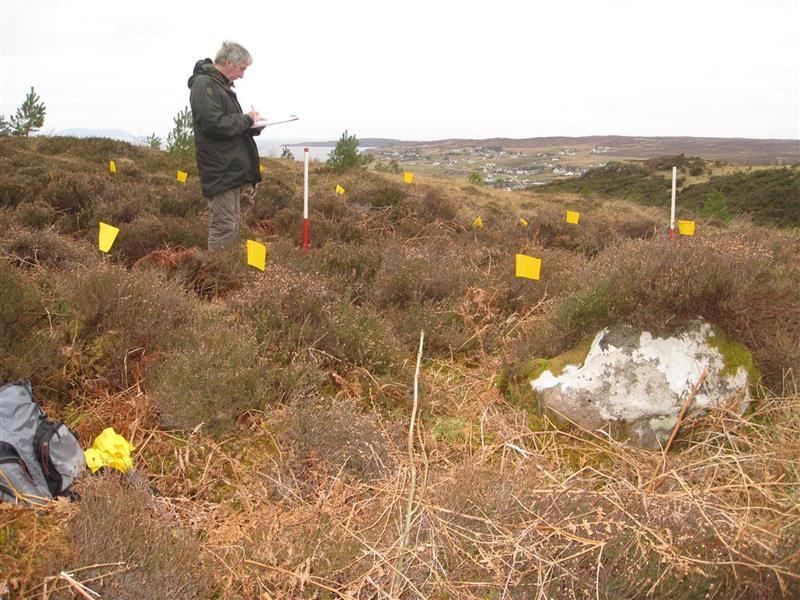 180789 876950 Torr Na H-Ulaidhe 8 (Auchtercairn R2) JF002: The hut circle was visited by A Welti and J Fenton in 2011 as part of research for a dissertation on hut circles in Wester Ross. This was part of a degree course overseen by Aberdeen University. This HC is one of 10 circular stone structures in the Auchtercairn area above and to the east of Gairloch. JF002 structure lies on a platform dug into and built out from a very gentle north facing slope 50m to the west of steep crags. The platform is strongly revetted to the western side. The surrounding landscape is covered with a mixture of heather and grass with some bracken. The interior of the structure is mainly heather with some bracken. In the surrounding area there are field boundaries of turf and stone. From the site there are panoramic views to the sea. The wall consists of a single irrregular ring of boulders, thickness 0.4m and maximum height 0.5m. The possible entrance faces east. The wall boulders are coloured; green amphibolite, brown sandstone and grey gneiss. They seem to have been placed with a regard for the colour. JF002 is 20m from JF003 (see MHG59286). <1> <2>

This site was subsequently investigated in two phases which revealed that there had been two periods of activity, Late Neolithic and Early Bronze Age, and that the stone circle had been added after these. The platform may be interpreted as a work area. The platform was investigated briefly in 2013 as part of the Wedigs Project. It was found that it was unlikely to have been a dwelling. Evidence was found of a fire, including charcoal (subsequently dated to the Neolithic), a cobbled area, and an assemblage of quartz chunks. Trench 4 was dug in a dog-leg across the centre of the structure. Wet weather prevented completion of the excavation. The wall of the structure appeared to consist of surface boulders. An area of small cobbles was uncovered, associated with many small cores and flakes of quartz and some charcoal. The charcoal was concentrated in a possible hearth area. A follow-up dig was carried out in 2014 when trenches 5, 6, and 7 were opened up. There was a spread of charcoal from the hearth area under and beyond the wall. Charcoal from the T4 hearth area yielded a date of 4719±30 BP (GU30617) This is 2769±30 BC, Late Neolithic. The trench T5 dug in the further investigation gave a C14 date under the wall of 3341±35 BP (GU34311). This is 1391±35 BC, Middle Bronze Age. There seems to have been anthropogenic activity on the platform over a considerable time span The slight differences in proportions of different materials in each layer may infer changes in intensity or type of use of the platform. The pollen assemblage (analysed by S Timpany of UHI) showed an initial Early Neolithic landscape of scrub woodland and grassland being replaced by heath and grassland as woodland declines. Corresponding to this decline the appearance of cereal pollen and microscopic charcoal suggested deliberate removal of the woodland for arable activities. Dung related fungi indicated the presence of livestock. An assemblage of 71 pieces of chipped quartz including a borer with a strong point was recovered. The flakes indicated a combination of reduction techniques, the majority obtained by a direct hard hammer technique, poorly controlled. It is possible that Achtercairn 2 was associated with the phase 2 platform of Achtercairn 3 in the Bronze Age. Achtercairn 2 had a Late Bronze Age date for the phase 2 build, but no date was obtained for the earlier phase 1 earth ring bank. It may be noteworthy that the Achtercairn 3 Layer 5 thin morphological section showed a similar compact floor to that in Achtercairn 2 Layer 1. <3> <4> <5>