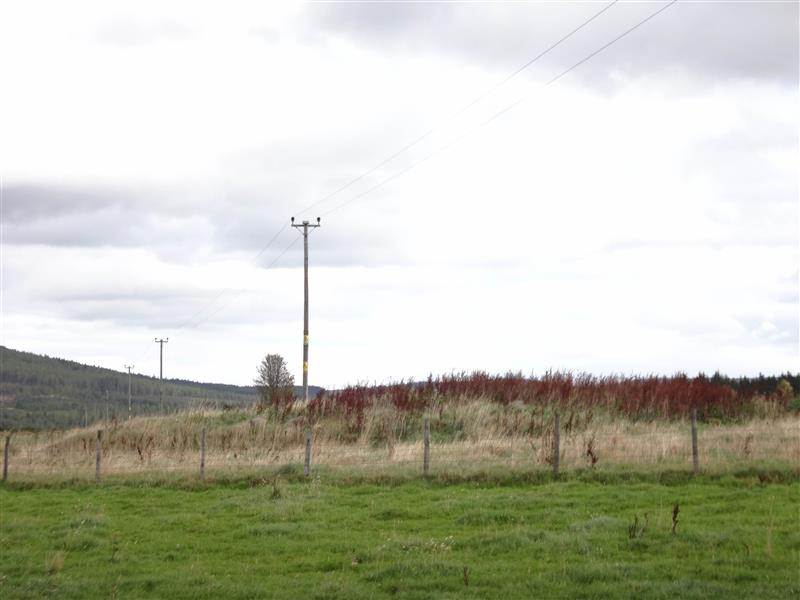 NMRS Notes: NH57SE 1 5813 7357.
(NH 582 735). Balna Crotchen: A possibly short horned cairn with a polygonal chamber. The site lies at edge of a field on terrace above river at just under 700 ft. OD. It is less than 1/4 mile S of other two chambered cairns at Boath which can be seen from the site. The cairn material has been largely removed so that a depth of only 2 -3 feet remains. The cairn now appears to be square in plan with a diameter of c60 ft., but it is difficult to know how far this shape is due to ploughing of field. There are various large boulders lying about site but they do not seem to form part of structure; a field wall crosses NE edge of the cairn.
In centre there are a number of split slabs which have formed main stones of a chamber entered from E.
Only one stone of the passage or outer part of chamber can be seen, evidently part of the wall; another leaning slab further to W. might be part of opposite wall. The top of this stone is level with ground, but a hole beside it shows it is at least 2 ft. 9 ins. high. To W. of it are two transverse slabs flush with present ground level, both stones appear to be in situ but they are not placed opposite each other as is normal. Within these stones five more define a large oval chamber, the back slab is only 8 in. high, others ranging from 1 ft. 9 ins. to 3 ft. 4 ins. high. Inside chamber are lying a number of large flat slabs, evidently part of roofing.
<1> <2>

The monuments to NNE of Easter Ballone farm consist of remains of three chambered cairns of neolithic date (NH57SE 1, 2 and 3). Southernmost of these chambered cairns, known as Balnagrotchen, may have been a short horned cairn and has a polygonal burial chamber. It lies on edge of a field on a terrace to NE of farm. Repeated ploughing has largely removed the cairn material and the monument now appears to be square in plan.
Info from Hist Scotland, scheduling document dated 11 April 1997.

Phone call from Hilary Hanson, FMW, 1/2/00.
She has noted raised turf trackways between the Boath Chambered Cairns, visible because the vegetation is very low at present.
Low sun winter aerial photography would be advisable.
John Wood 8/2/00

The site was visted and photographed by R Spencer-Jones on 03/10/2014. This apparently smallest cairn of the three Boath cairns, now lies in a pastoral field south of the main Boath road. It is contained within a barbed wire cattle fence, with stile at SE corner. There is a telegraph pole sited towards the northern end. Much of the detail described, eg by AS Henshall in 1963, is now no longer visible as the cairn is seriously vegetated. The stones of the central chamber are no longer visible. <3>