A Hut Circle at Badenscaille. 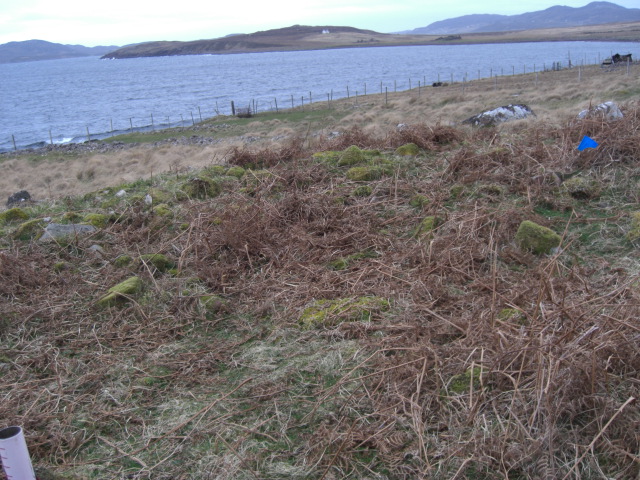 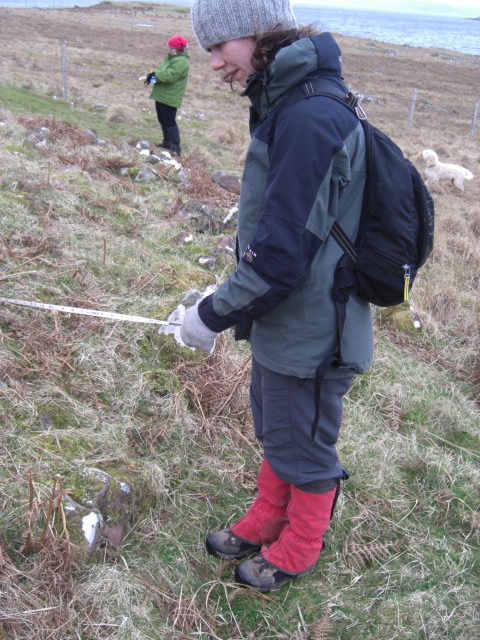 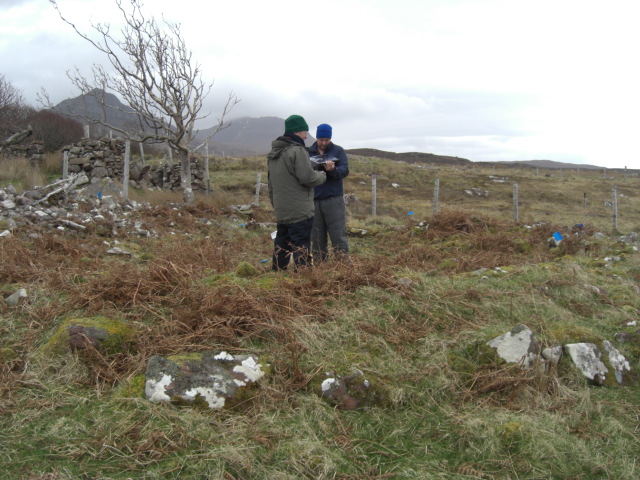 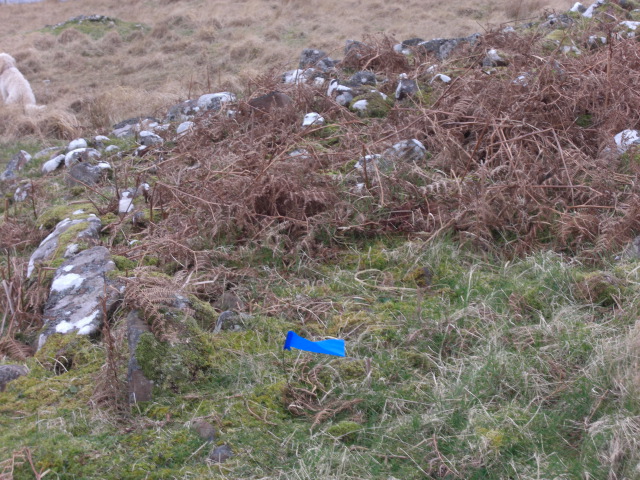 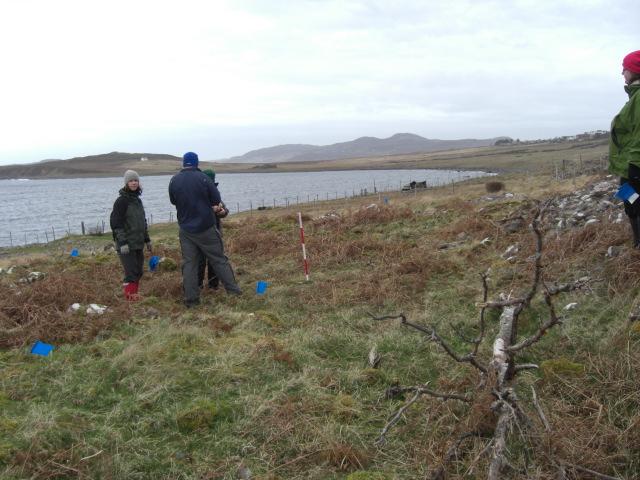 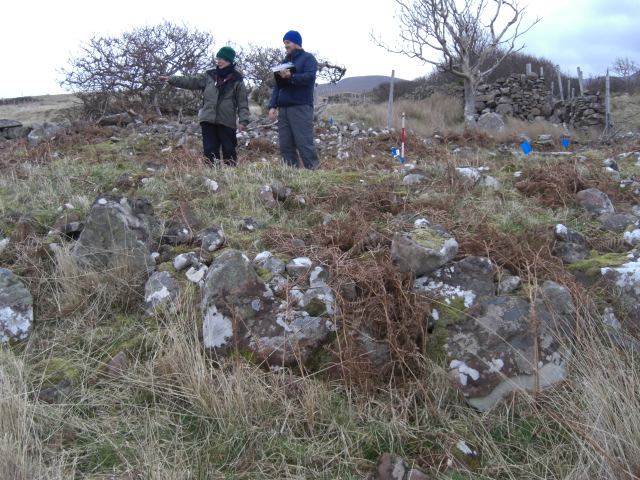 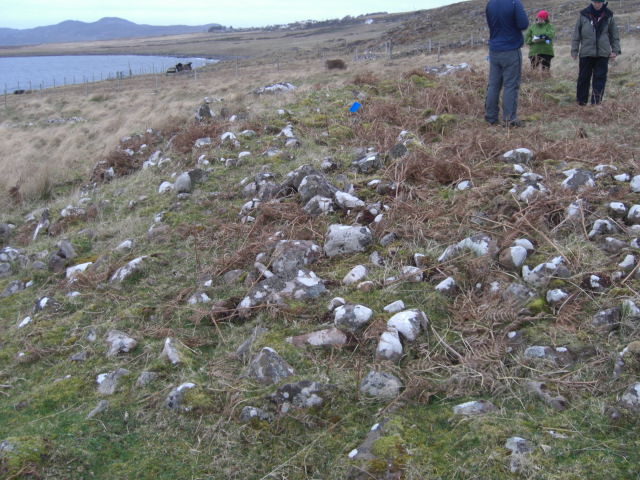 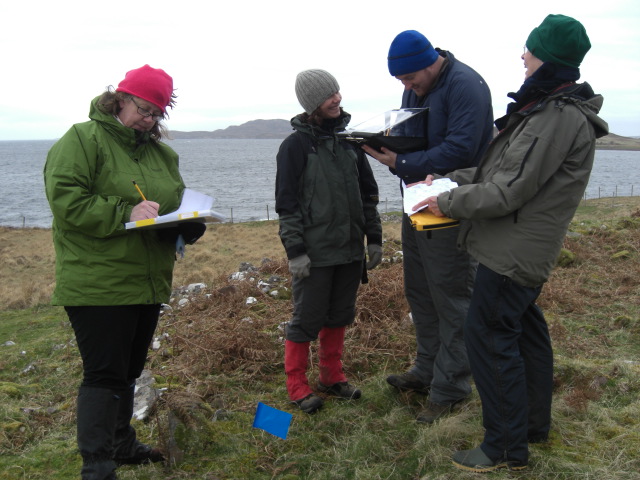 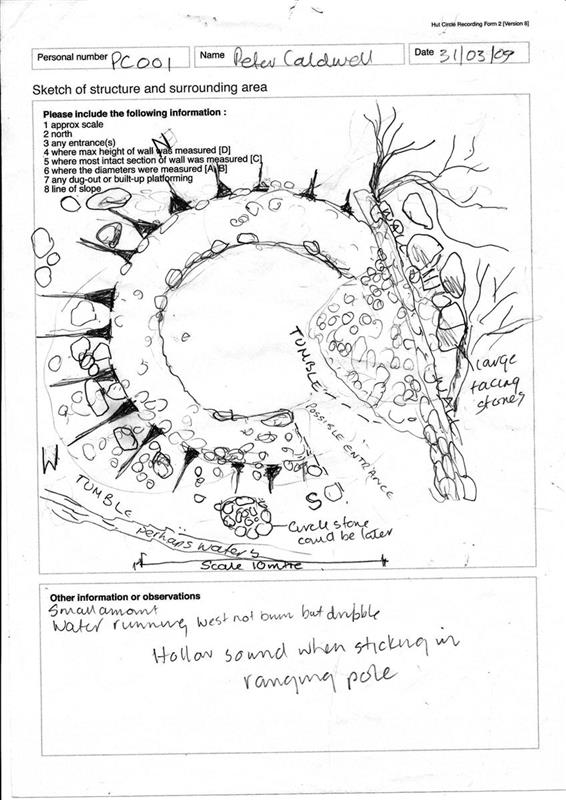 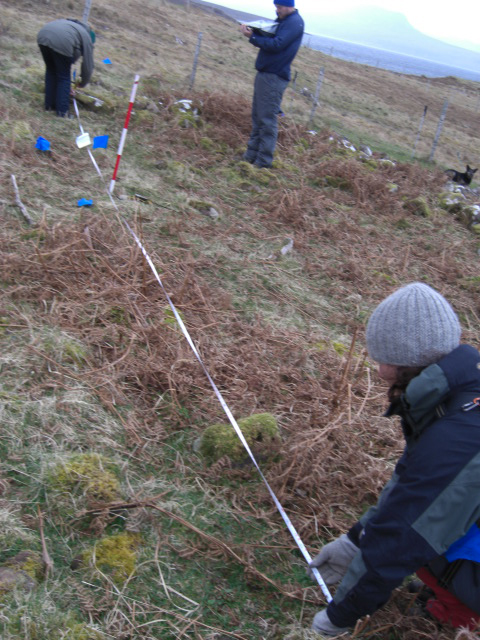 A Hut Circle at Badenscaille.

NC00NW 7 0353 0640
Remains of a hut circle. It has been partially mutilated by a modern field wall and dumping of stones from field clearance. Sufficient remains to show that it had an average overall diameter of 12m and consisted of a double wall of stones set on edge, with the space between filled with small stones. The entrance is in SE. Any associated field system that there may have been has been destroyed by modern cultivation.
According to Mr Fraser (local historian, Achiltibuie), it is called 'An Deilbh' meaning the 'form' or 'formation'. Mr McLeod (Badenscallie, Achiltibuie), the tenant of the property, knows it as the 'Fireplace'.
Visited by OS (G H P) 29 May 1962.

A circular stone-walled hut measuring 12.3m in over-all diameter. The strong rubble wall is faced externally with contiguous stones on edge and one or two inner facing stones give a wall thickness of 2.2m. The ill-defined entrance in ESE is mutilated by a modern wall which also crosses NE arc. Modern stone clearance has been piled against this wall inside hut.
Visited by OS (J M) 16 July 1974.

The remains of this hut-circle are situated close to shore at WSW end of a croft. It has been terraced up on W side and it measures 8m diameter within a wall 2m thick and 0.6m high, with an entrance on ENE. The outer face of wall, composed of edge-set stones, is near complete, and occasional inner-facing stones survive on NW and SW. A field wall crosses E side of hut-circle and a large quantity of field clearance has been dumped on E and NE.
(ACHIL94 73) Visited by RCAHMS (SDB) 18 May 1994

203540 906397 Badenscaille 1 (The Fireplace) PC001: The hut circle was visited by A Welti, Catriona Martin and others in 2010 as part of research for a dissertation on hut circles in Wester Ross. This was part of a degree course overseen by Aberdeen University. This circular stone structure is in fair condition. There are traces of further circular house platforms on the sloping hillside to E of Badenscaille Burn, between PC001 and CEM020. The hillside vegetation is a mixture of grass and reeds, and the interior of PC001 is covered with grass and bracken. The hillside may have been a settlement area where early HC platfroms were robbed of stones as later HC's and walls were built. There are remains of several degraded stone walls running downslope towards the sea. There are lazy beds at the highest point of the hillside. PC001 is the best preserved of the cluster; the ring bank and many wall facings are visible. There is a runnel of water at the W edge of the HC. Entrance width is obscured by tumble (see sketch). The passage to S of the entrance seems long enough to be an extended terminal. A later wall running NW/SE cuts across the E edge of the HC. The structure is 50m from the sea and 300m west of the Badenscaille Burn. The site has panoramic views over the sea. Average inner diameter of PC001 is 7.1m, outer diameter is 12.5m. The double skinned wall is 2.3m thick with maximum height 0.5m. The probable entrance faces southeast and passage length is 3.6m. There are sheiling remains near to the HC. PC001 is distant 70m from CEM001 (see MHG), 100m from CEM002 (see MHG), and 200m from CEM004 (see MHG). <1> <2>