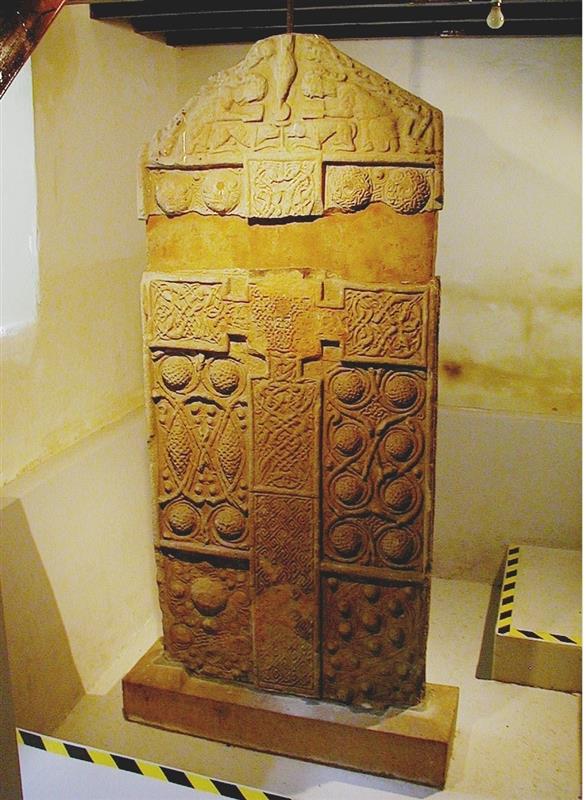 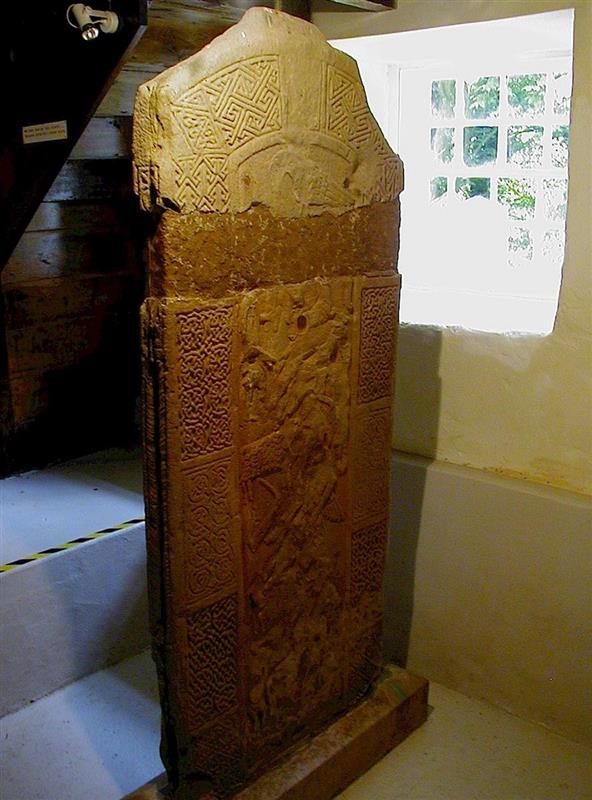 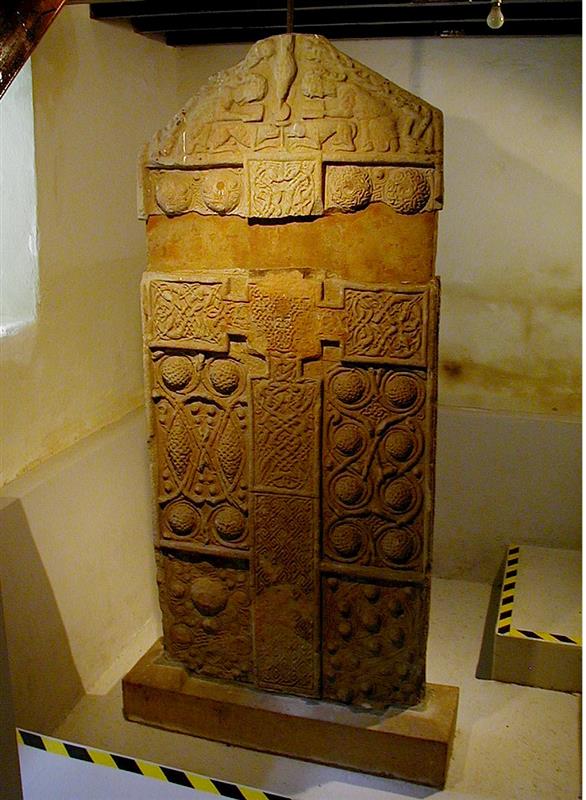 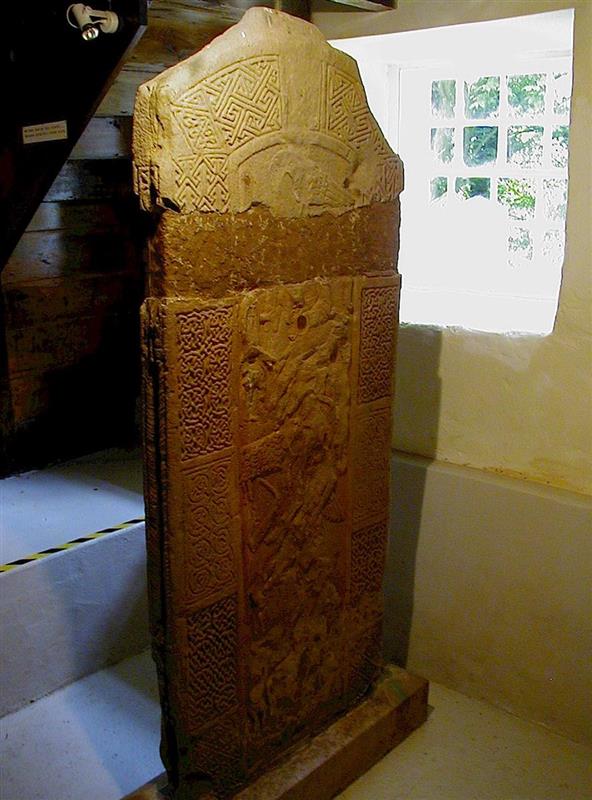 The stone has been re-erected in the church, with the floor lowered to accommodate it. The two pieces have been joined by modern infill. The newly discovered piece (which forms only part of the linking section between the above) is held in Tain Museum. The stone is decorated on both faces - one crossed based, the other with scenes of hunting, music and David scenes. There is decoration down one edge only. The lowest edge of the stone is probably still missing. The non cross side has been (deliberately?) damaged, probably while attemping to break it up - HAW 8/2004

This magnificent Class 2 sculptured stone is intricately carved in relief. The style echoes that of the the sculptured crosses on Iona, the Book of Kells, and illustrated manuscripts of Lindisfarne in Northumbria and Durrow in Ireland. It seems always to have stood in the churchyard at Nigg. In 1727 it was blown down in a storm but was soon re-erected against E gable of the church. It was then broken while being moved to give access to a burial vault and re-erected upside down. Later it was moved again to an open-sided porch at W end of the church, from where it was taken inside the church some years ago.

This sculptured stone has always stood in churchyard at Nigg. Repaired at Allen's instigation it now stands on a modern base at W end of church immediately outside vestry. The stone is an upright, rectangular cross slab with a pedimented top, 7ft 3ins high by 3ft 5ins wide, sculptured in relief on front, back and right side.
J R Allen and J Anderson 1903.

A sculptured cross slab as illustrated. It is preserved under an open-sided porch at NE end of church.
Visited by OS (A A) 25 September 1972.

Class II symbol stone : on face is a cross with a scene depicting SS.Anthony and Paul and raven.On reverse is an eagle above the remains of an elephant with a hunting scene showing a hound and a deer and one mounted figure and one standing. Above are an illustration of David with the lion and sheep.
A.Mack 1997 p.117

Nigg, Ross and Cromarty, Pictish cross-slab fragments
Measurements: H 2.05m +, W 0,87m, D 0.16m
Stone type: grey sandstone
Place of discovery: NH c 8045 7169
Present location: in the south-west end of the church at Nigg.
Evidence for discovery: first recorded visually by Cordiner in the late 18th century, but known to have stood in the kirkyard until 1727, when it was blown down. Thereafter it stood close to the east gable of the church, until it was moved towards the end of the century and broken in the process. The lower portion was then re-erected upside down and remained in that position until Allen had it taken down at the end of the 19th century, and the two fragments were joined (too close together) with concrete and placed in a modern base in the kirkyard at the west end of the church. By 1972 a shelter had been built over it, and within the decade it had been taken into the church and erected at the south-west end. A fragment of the missing portion was found in the burn to the east of the church in 1998. The stone was conserved in the early 21st century and the new fragment placed in its proper position between the two larger fragments.
Present condition: parts of the upper portion and the base are missing and the slab is very weathered.
Description:
Nigg represents ‘the supreme masterpiece of Pictish art’ (Henderson & Henderson 2004. 227).
The rectangular slab has a pedimented top and very slightly tapering sides. It is carved in relief on both broad faces and on one narrow face (the other narrow face may have been trimmed or have suffered obliteration from weathering). The panels on both broad faces and the cross on face A are bordered by roll mouldings.
Face A bears a slender cross with rectangular arms, square indents and a square centre, set on a long shaft. The side-arms extend to the sides of the slab and the upper arm to the lower frame of the pediment. The arms contain interlocking beasts with fine thread-like limbs, and the square centre is filled with nine circular knots in three rows of three knots. The lower shaft contains dense diagonal key-pattern. The panels on either side of the cross are carved with high-relief and intricately carved bosses, serpents and spirals. The top edge of the pediment is bordered by plaited palm trees, enclosing the bowed figures of St Paul and St Anthony but leaving a space at the apex for the raven to deliver the host to the readied chalice between the two saints. They hold books, almost resting on the backs of the two crouched animals guarding the chalice.
The carving on narrow face B is much damaged but there were certainly four panels or ornament.
Face C bears a long panel of figural carving within a wide border divided into panels crammed with patterns: diagonal key pattern, interlinked ring-knots and interwoven spirals. Beneath the eagle and Pictish beast symbols at the top, the central panel is devoted to David, although his figure, once carved in high relief, is severely defaced. He is shown rending the jaws of the lion, with his own symbols of lamb and harp in front of him, and images of the royal hunt above and below.
Date: ninth century.
References: Cordiner 1788; ECMS pt 3, 75-83; Henderson & Henderson 2004, 41, 48, 139-40, 129-31; Fraser 2008, no 124.
Early Medieval Carved Stones Project, A Ritchie 2017