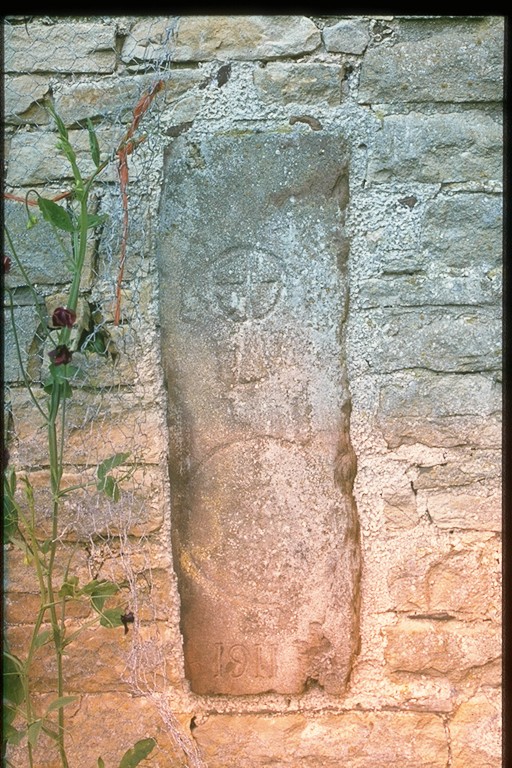 Another fragment recently came to light, having lain amongst rubble at site. Detail obscure, and the iconography not yet identified. See NC96NE0040 DML 2/2/00

A: A Class I symbol stone found about 1853 on links by shore at Sandside (NC 95 65) near an ancient settlement (presumably NC96NE 9) and removed firstly to Sandside Farm to cover a mill-lade, and then, in 1889 to Sandside House where it is placed within a wooden frame against a wall at the east side. It is a rectangular slab of local sandstone 4ft 8.5ins long, by 1ft 11.5 ins wide and 3.5ins thick, with incised symbols on one face only. The symbols are a horizontal row of three conjoined ovals, a mirror-case and, at the bottom, a mirror and comb.
B: A rectangular sandstone block 2ft 5ins long, by 9ins broad and 8ins thick which was found built into a stone dyke not far from Tigh a' Bheannaich (ND05NW 9), near Shurrery (ND 03 57). On the face of the stone is incised a small, stemmed circle or orb 4ins in diameter containing an equal-armed cross. The stem is 3.5ins long and 1 - 1.5ins broach. Beneath, and occupying the breadth of the stone, is a plain circle with a diameter of 8ins.
J R Allen and J Anderson 1903; RCAHMS 1911, visited 1910.

(406) At Sandside House there is a stone incised with symbols, which was found built into a stone dyke near Shurrery, not far from Tigh a'Bheannaich, which was evidently the site of a chapel or religious foundation. It is a rectangular block of sandstone, 2' 5" in length, 9" in breadth, and 8" in thickness. On the face of the stone is incised a small stemmed circle or orb, 4" in diameter, containing an equal-armed cross. The stem is 3 1/2" in length, 1" in breadth where it joins the circle, and 1 1/2" at base. Beneath, and occupying the breadth of the stone, is a plain circle with a diameter of 8".
(407) Placed against a wall at the E. side of Sandside House, and set within a wooden frame, is another sculptured slab. It was found about fifty years ago, near the site of an ancient settlement on the sand links by the sea shore at Sandside, and was subsequently used to cover a mill-lade where a road crossed, in which position it remained until September 1889, when it attracted the notice of Mr Pilkington, the proprietor of Sandside, during some repairs to the mill-lade, and who removed it for preservation to Sandside House. It is a rectangular slab of the hard sandstone of the district, 4' 8 1/2" long by 1' 11 1/2" wide by 3 1/2" thick, sculptured on one face with incised lines, thus:-
Front.-At the top, a symbol (unnoticed previous to the discovery of this stone), consisting of a horizontal row of three flattened ovals, joined together in the middle by pairs of small circles, and having a double outline at the tops and bottoms of the ovals; below this, the mirror-case symbol; and at the bottom, the mirror-and-comb symbol.
Visited by RCAHMS, 29th August 1910

Sandside House 1, Caithness: Pictish symbol stone
Measurements: H 1.44m, W 0.89m, D 0.10m
Stone type: sandstone
Place of discovery: NC 951 651
Present location: fixed (upside down) to a garden wall at the rear of the house.
Evidence for discovery: found around 1850 ‘near the site of an ancient settlement’ on the sandy links close to the shore, the stone was used as part of the covering of the mill lade at Sandside Farm. In September 1889 it was extracted and taken to Sandside House.
Present condition: good.
Description:
Finely incised on a smooth broad face of the slab are the triple oval symbol above a disc with indented rectangle, a mirror and a comb (no teeth depicted). Within the disc of the disc with indented rectangle there is a double circle offset from the centre of the disc.
Date: seventh century.
Early Medieval Carved Stones Project, Compiled by A Ritchie 2016