Remains of Ormond Castle near Avoch 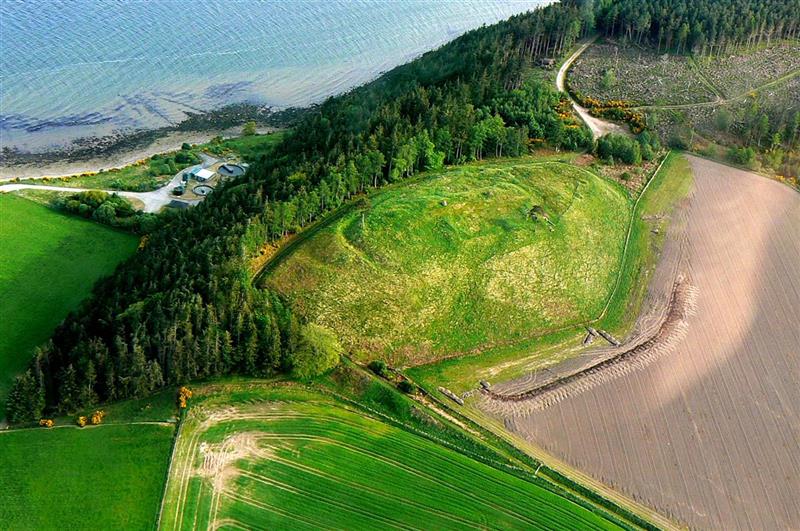 For bronze axe hoard from 'Ladyhill' traditionally linked with this locality, see NJ26SW 121.
Ormond Castle, or Castle of Avoch, was seat of Ormonds, and is said to have been one of royal castles built c1179. There are early references to "Mote of Ormond'. It is said to have been destroyed on approach of Cromwell's army 1650. Castle appears to have been of coarse red sandstone and lime. Only foundations remain. The site was partially cleared by Beaton, who believed that some of tower foundations, which appear to be circular, would prove to be rectangular, as did tower 'A' on plan. The outer defences on NE follow contour of hill. According to NSA (1845) these are composed of three breastworks with median ditches, but Beaton (1885) mentions only one ditch. NSA 1845; A J Beaton 1885.

Remains of Ormond Castle are generally as described and planned by Beaton: walls are mostly reduced to vague turf-covered footings 0.3m in height. Consists of three courts aligned NE and SW and occupying summit of Ormond Hill. The central court contains foundations of two oblong buildings and incorporates the footings of 4 towers or turrets in its SW and SE walls. The entrance, of which no trace remains, was probably in SW side.
NW and SE walls are extended to NE to form, at a lower level, a semicircular court containing an oblong building foundation; and incorporating a fifth tower in its SE arc. There is no trace of wall shown by Beaton (1885) within this court.
At opposite end of central court NW wall extends to W and S to delimit third court, NW arc of which incorporates a tower additional to that shown by Beaton.
To NE, where slopes of Ormond Hill are slightest, there are also remains of two banks and ditches.
There is a stone-lined well, within W tower of inner court and on a shelf to SE of that court, rock cut basin shown by Beaton (1885) as well. The approach through outworks runs NE and upwards on to this shelf.
Resurveyed at 1/2500. Visited by OS (N K B) 17 March 1966.

The earthworks around NE shoulder of hill comprise two ditches with outer banks, inner of which contrives around NW and SE sides of hill in form of a terrace reminiscent of an IA fort, for which hill is eminently suited. However clear-cut nature of ditches in NE suggests a later date.
Visited by OS (N K B) 3 December 1970.

For possible hoard of flat bronze axes, said to be from this area but more probably from Ladyhill district of Elgin, see NJ26SW 121. It appears probable that Beaton included these in his account of Ormond Castle on account of their having been presented to Elgin Museum by James Fletcher of Rosehaugh, a nearby property.
Information from RCAHMS (RJCM), 20 April 1990.

This site was included in the Atlas of Hillforts of Britain and Ireland online database. See link below for site entry. <2>

A Survey of Ormond Castle, Avoch, Ross-shire was carried out by members of the North of Scotland Archaeological Society and Avoch Community Archaeology group Mar 20th to 21st 2016.

"To date Ormond castle has not received the attention it deserves. It is traditionally associated with William the Lion (1143 – 1214). He built two castles on the Black Isle in 1179, one at Redcastle and a second which is thought to be this one. Andrew de Moray was owner of the castle in the 13th century and principal commander of Scottish forces in the north during the Wars of Independence in the late 13th Century, but was mortally wounded fighting alongside William Wallace at the Battle of Stirling Bridge in 1297. In 1455, after being in the hands of the de Moray family and the earls of Ross, the castle passed to royal control and in 1481 James III granted it to his son, the Marquis of Ormond, from whom the present name derives. The castle was destroyed by Cromwell’s forces in 1650 and the stones were transported over the firth to build the Citadel in Inverness.

Only the foundations of the walls remain today. The HES scheduling document for the site states that “the monument is of national importance because it is a fine field monument of a type rare in Scotland; it is said to have been one of the royal castles built c.1179 and …… the clearly defined remains have the potential to increase understanding of 12th century fortification techniques and military history.” Also of interest are the ditches and banks around the northeast side of the site, reminiscent of those found on some Iron Age forts and suggesting the possibility of the site having had earlier occupation." <3>