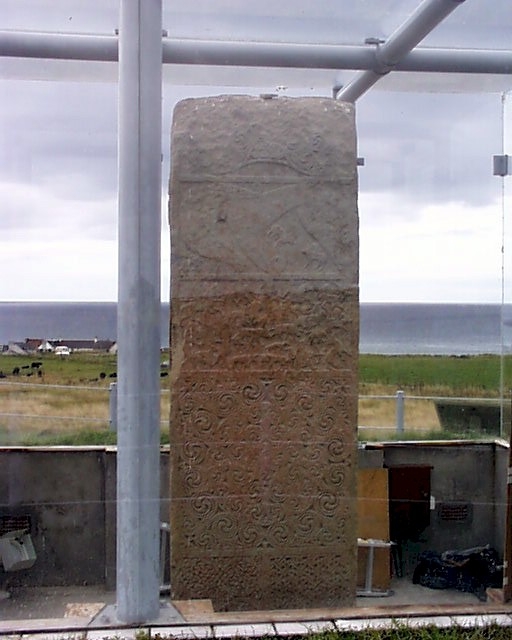 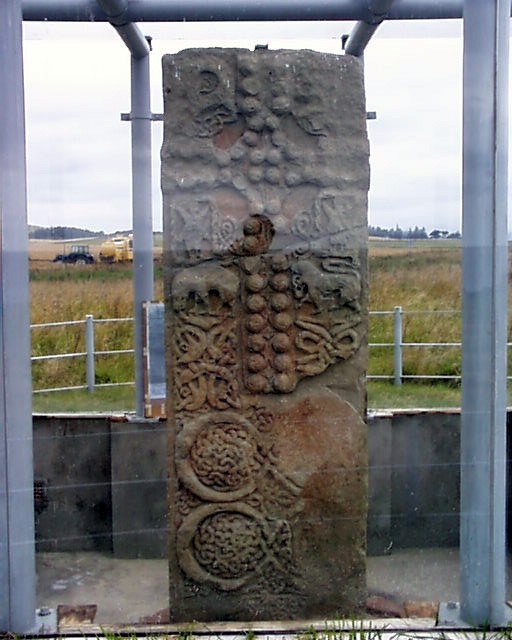 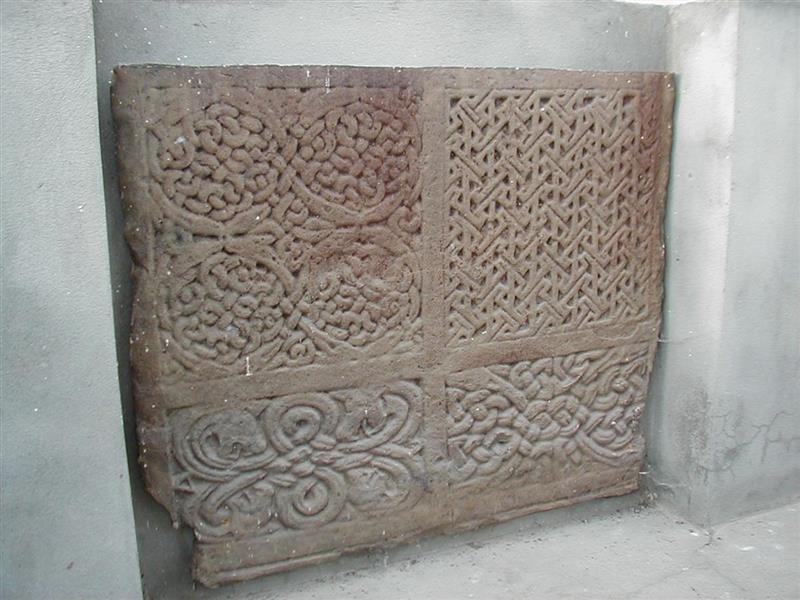 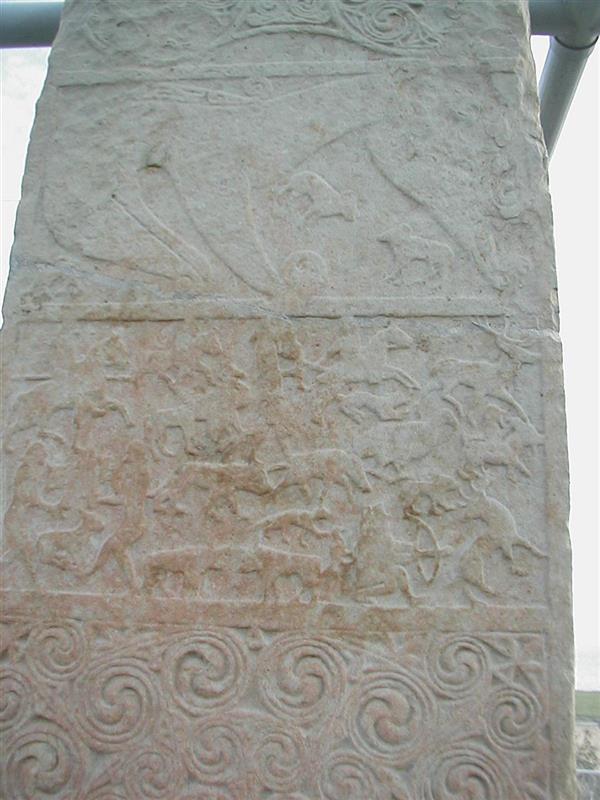 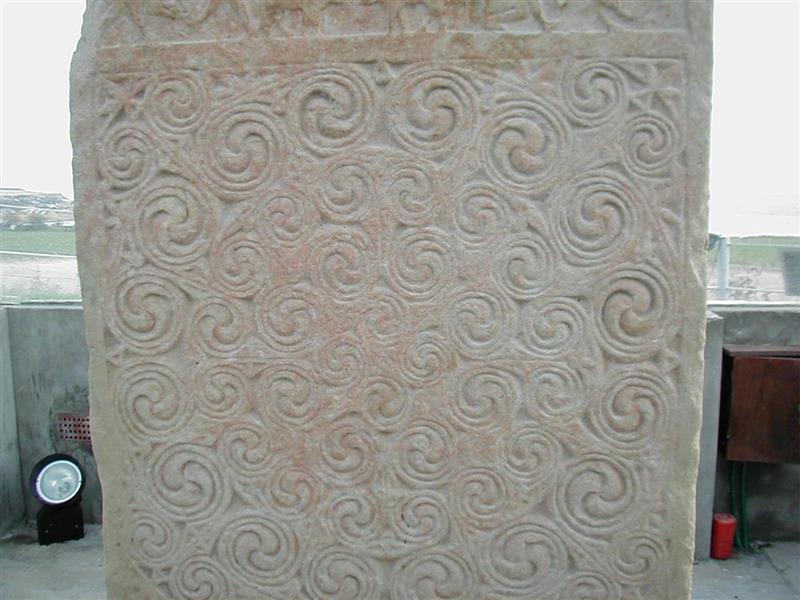 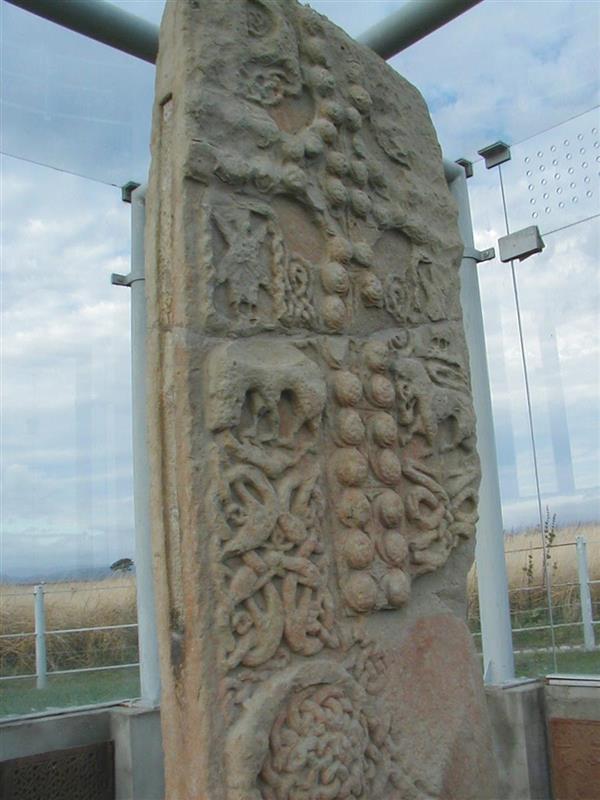 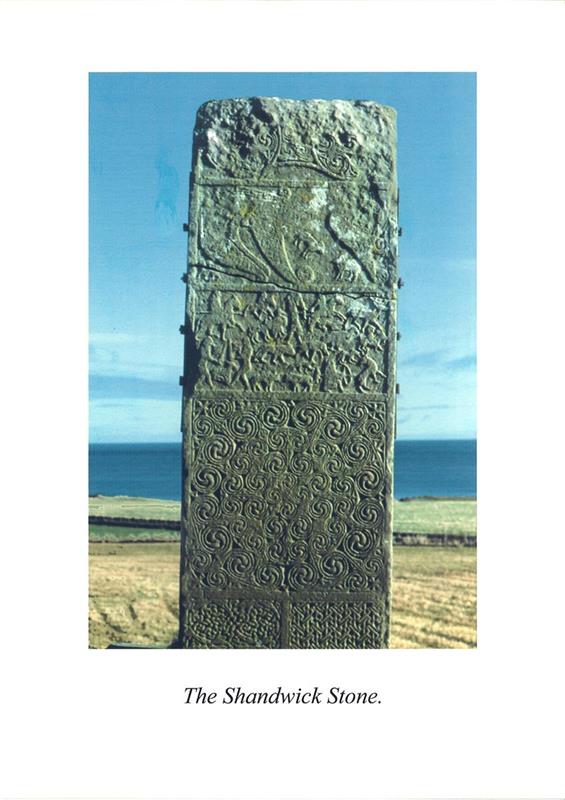 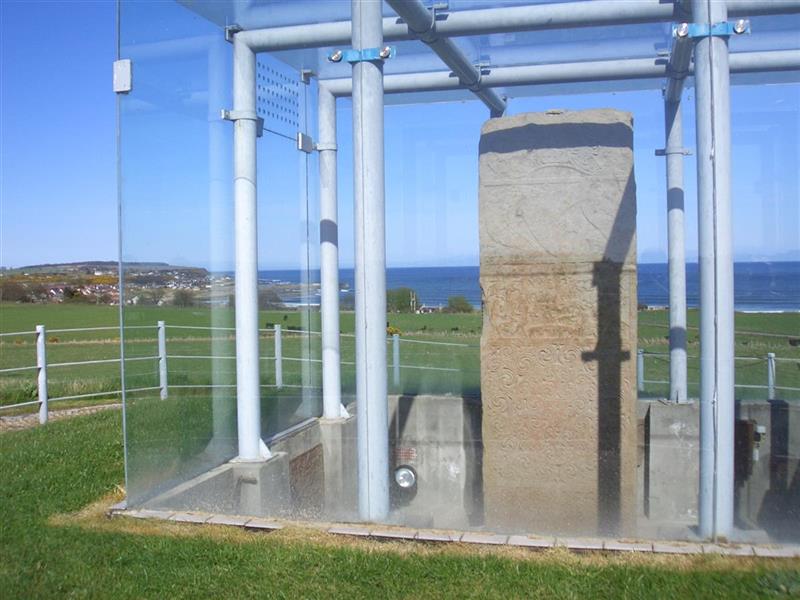 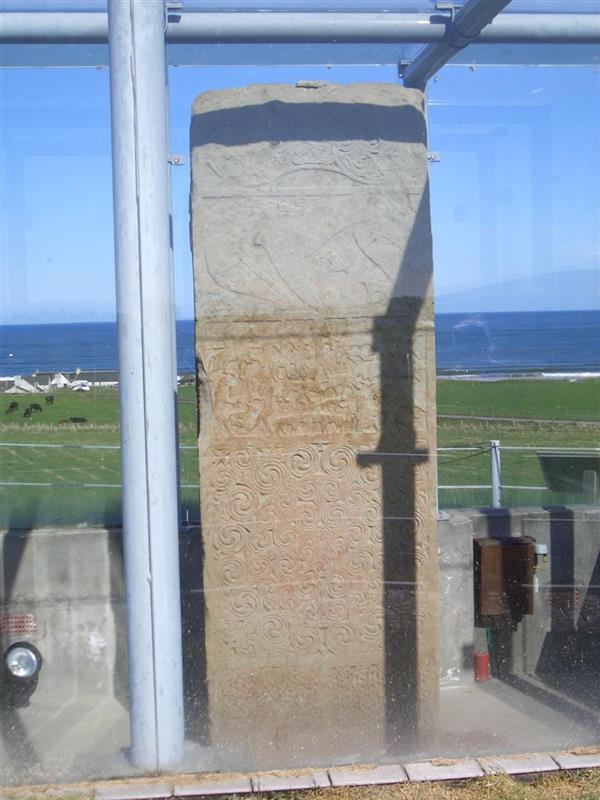 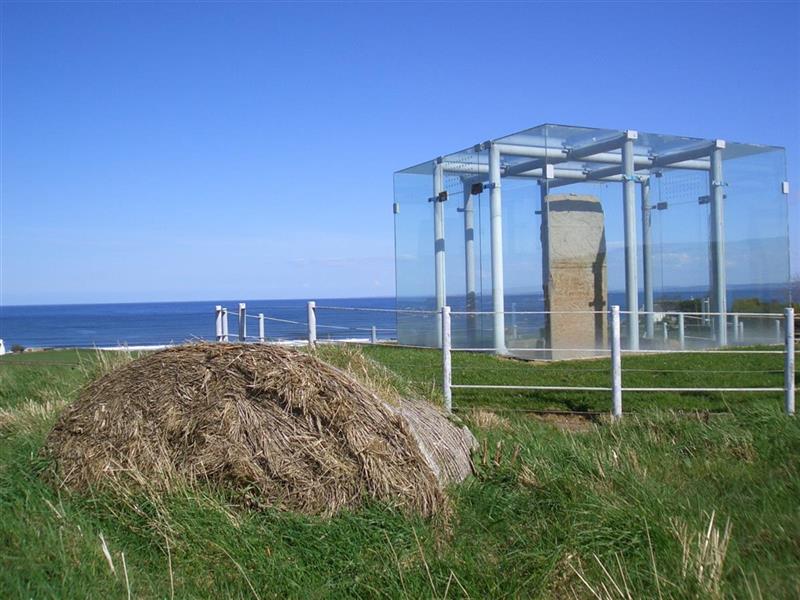 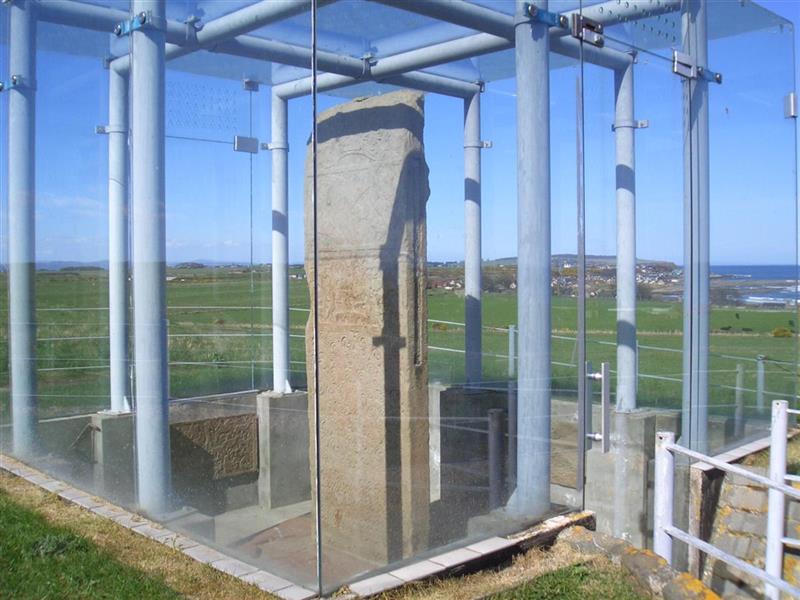 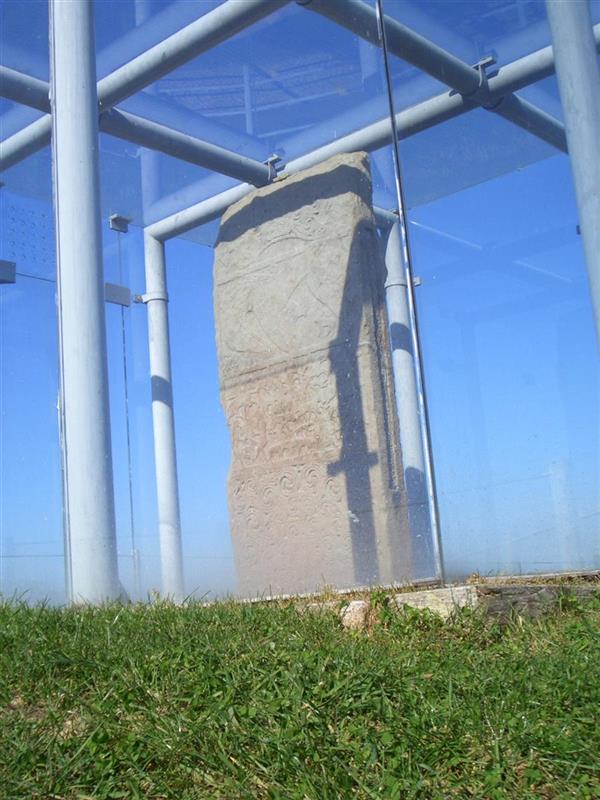 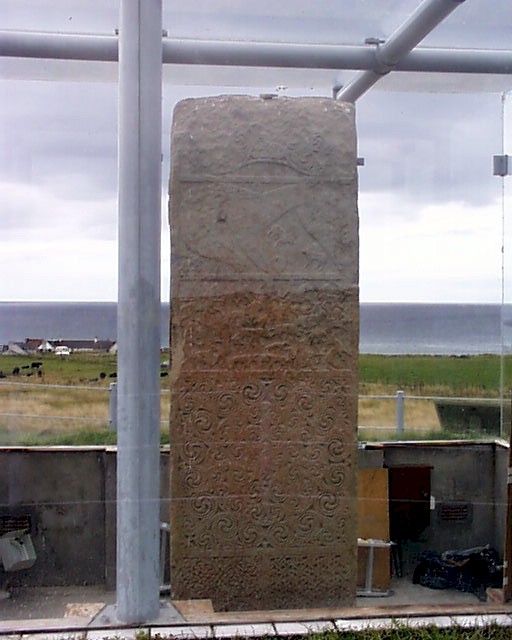 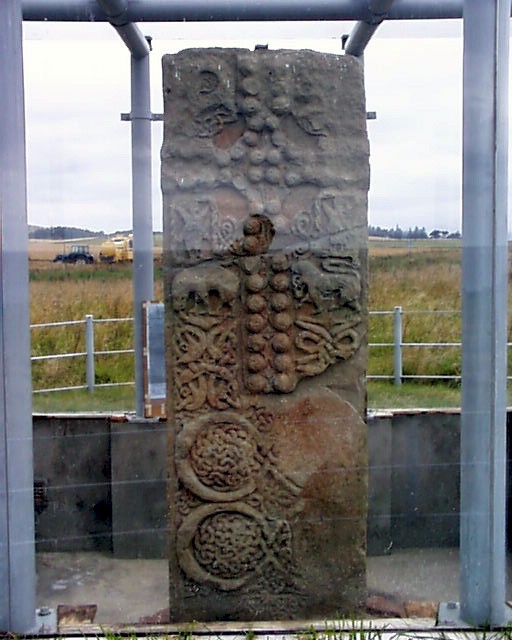 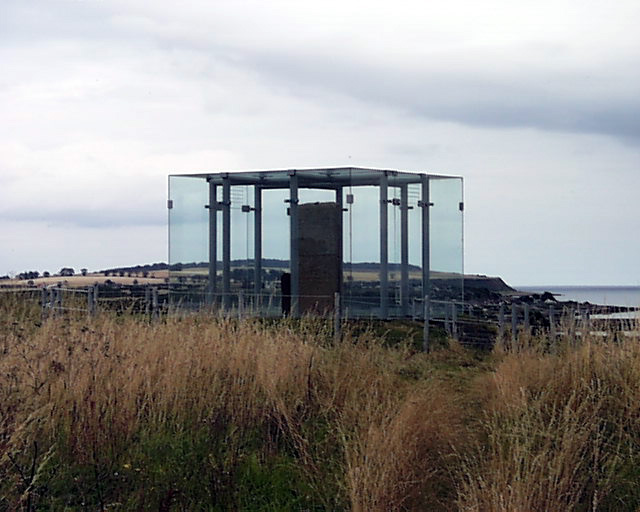 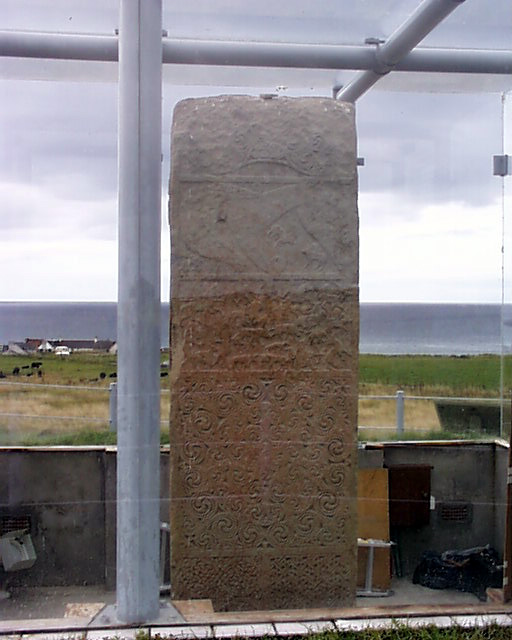 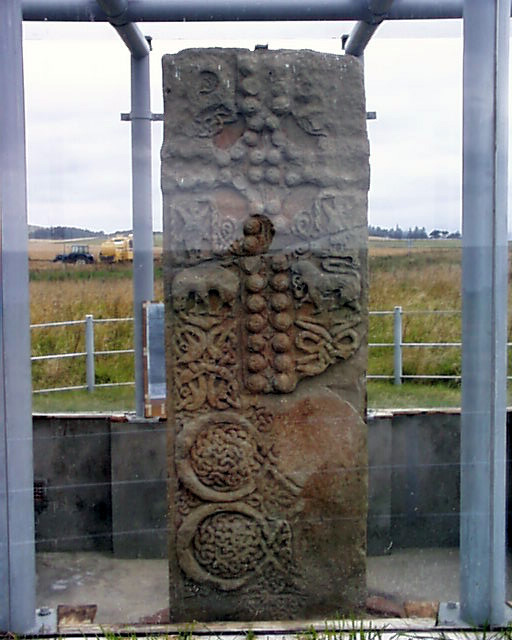 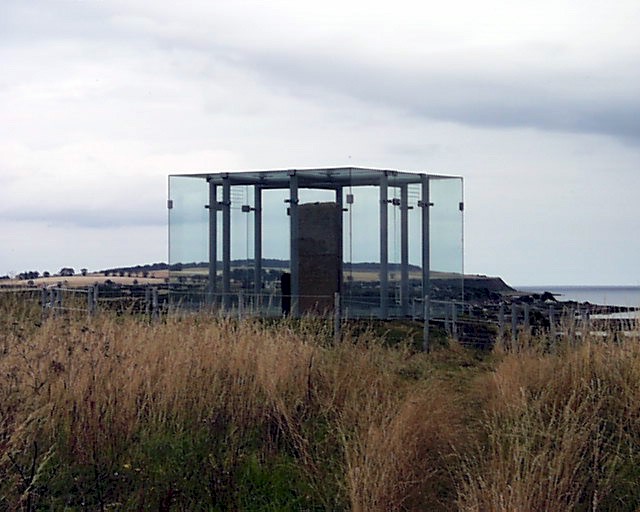 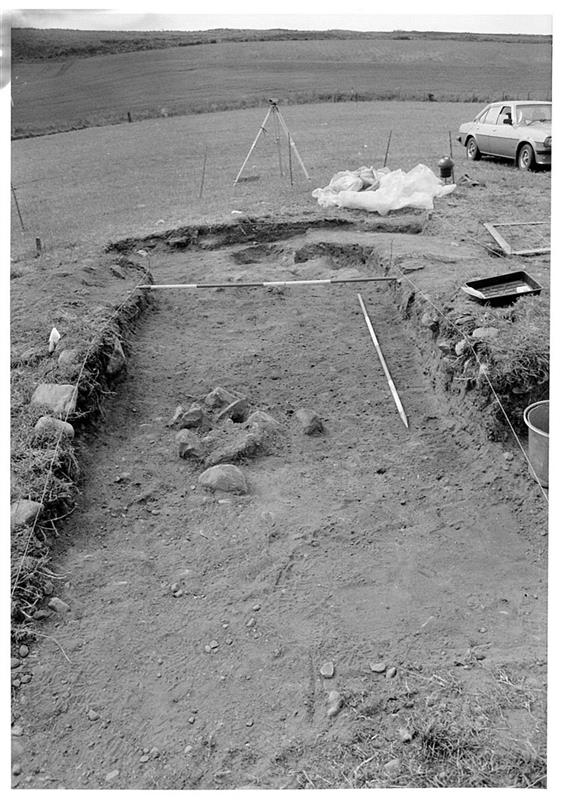 Excavation around the Shandwick Stone by Robery Gourlay © Highland Council 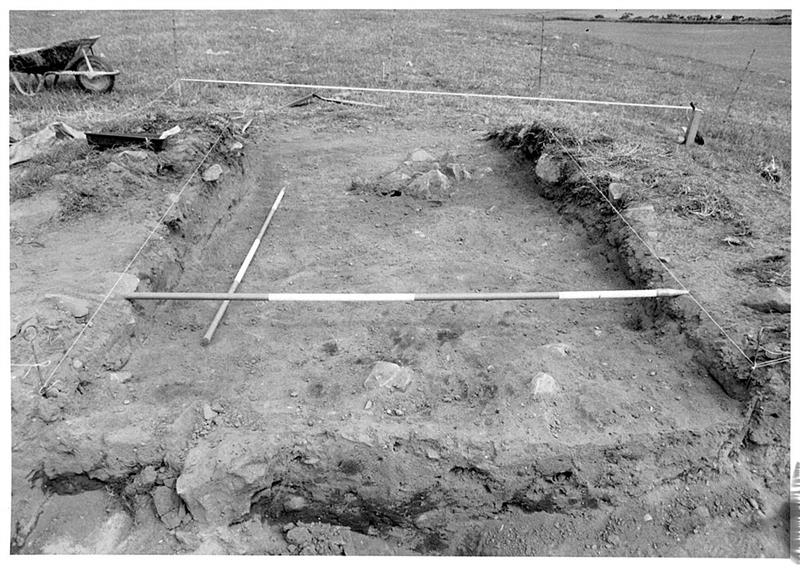 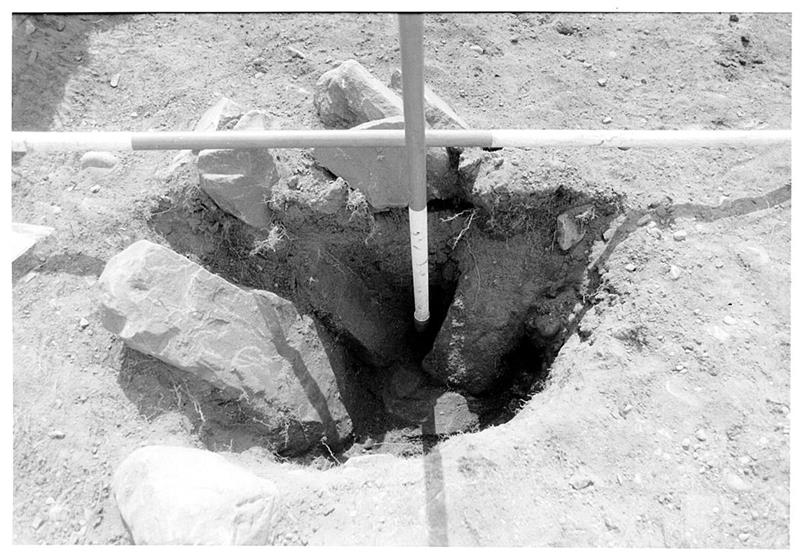 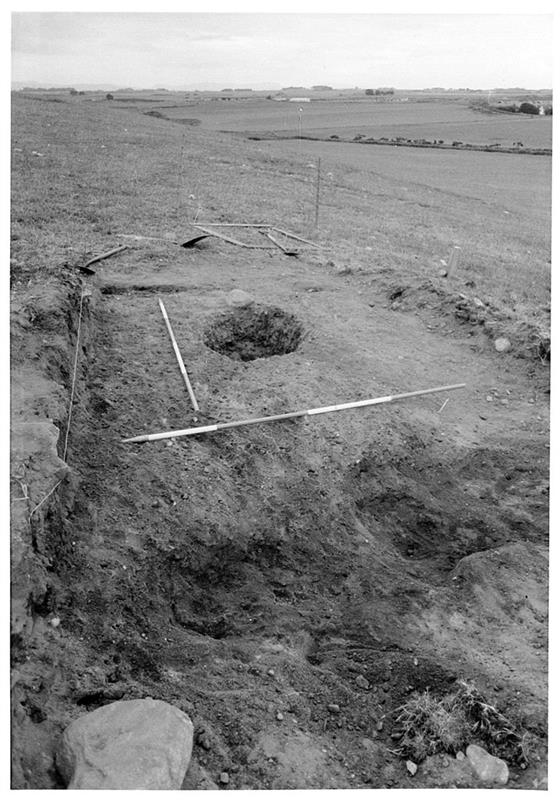 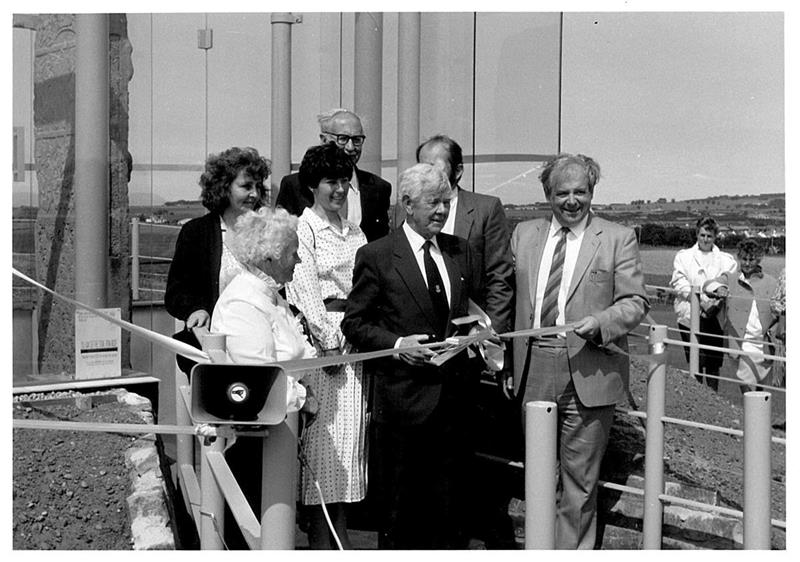 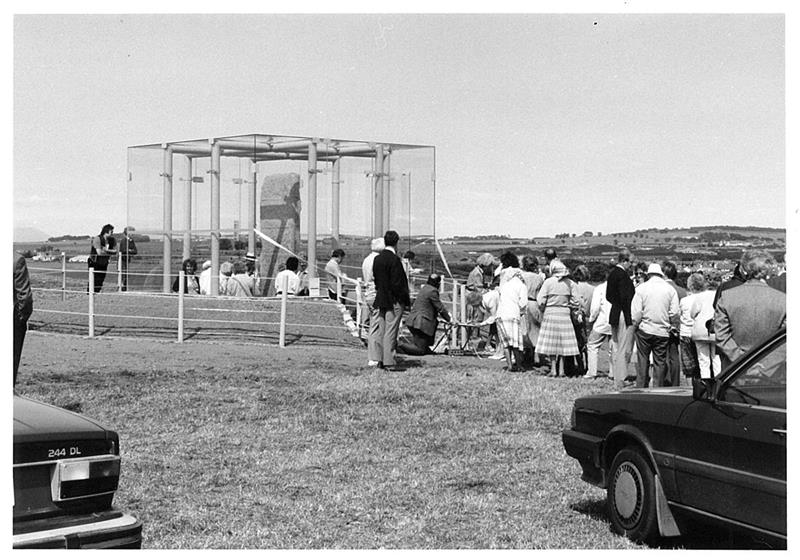 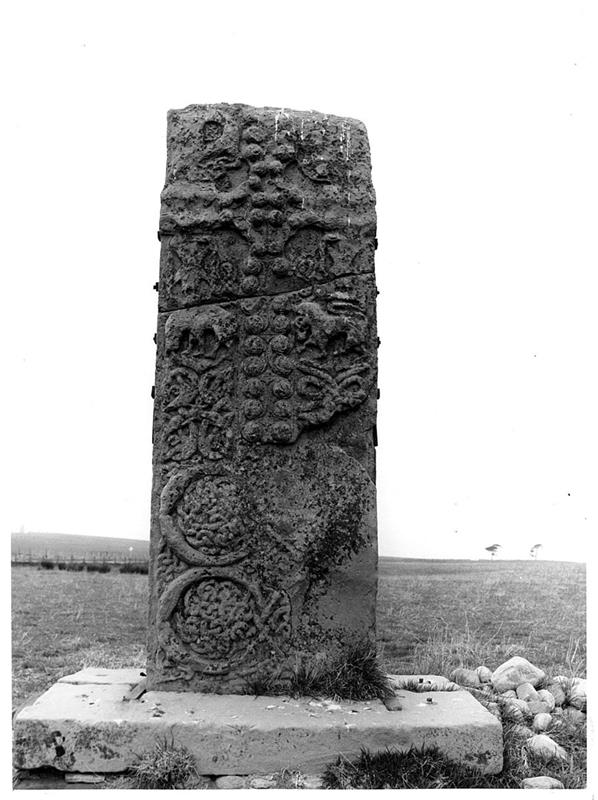 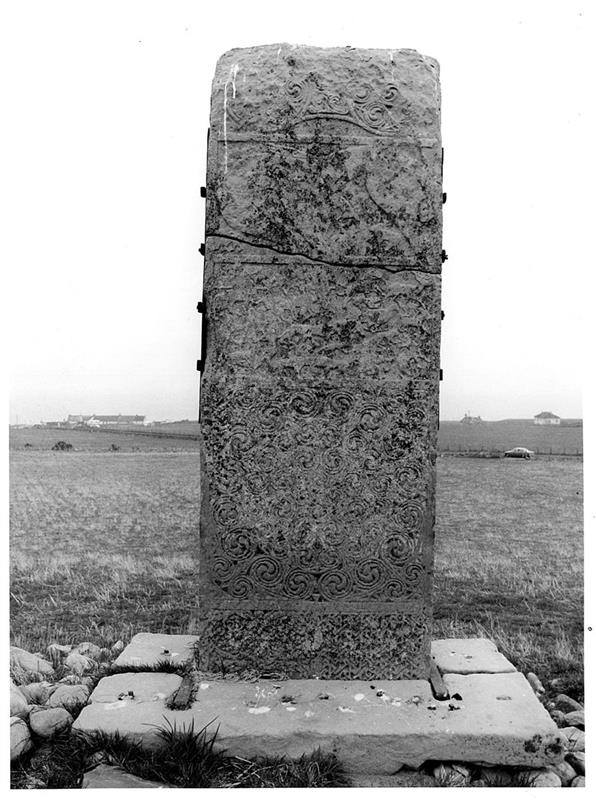 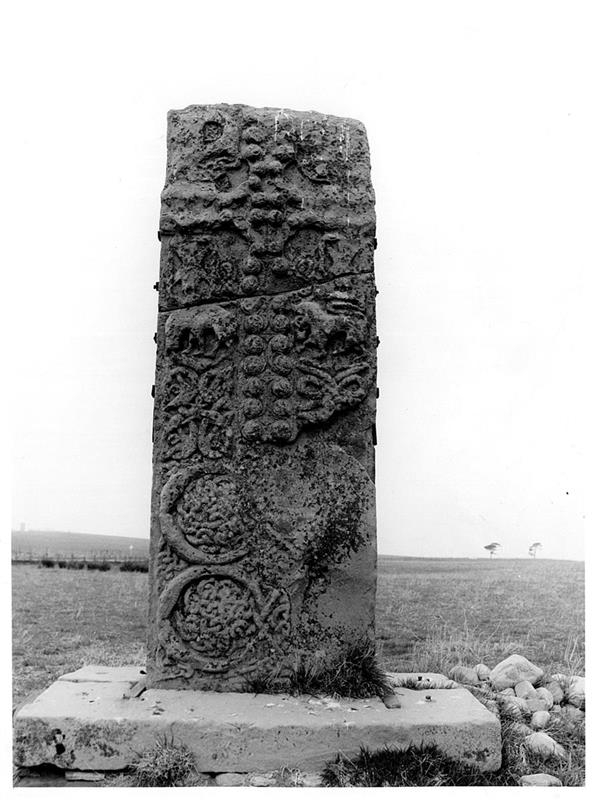 This symbol stone stands in field on hillside sloping towards sea above S side of village of Shandwick, where burials took place in former times. Blown down c1846 and broken into 2 pieces it has since been repaired and re-erected on a circular stepped base which conceals some of sculpture at bottom.
It is an upright rectangular cross-slab c.9ft high by 3ft 3ins with sculptured relief on two faces. <1>

This symbol stone now lies within a steel framed glass case which is surrounded by a fence to protect stone from further erosion.
Visited by RCAHMS (DE) January 1997

Class II symbol stone showing a cross on E face. On reverse is seen a double-disc in a panel above an elephant,which is itself over a panel showing fighting swordsmen and a crossbowman. <2>

RCAHMS gazetteer entry (with photo of reverse side) reads: " ‘Clach a’Charridh’. A sandstone slab, this bears on one face a cross, decorated with spiral work, against a background of angels, beast and panels of interlace. On the reverse it bears a double-disc, a ‘beast’, a hunting scene, and panels of spiral-work and interlace." <4>

Shandwick, Ross and Cromarty, Pictish cross-slab fragments
Measurements: H 2.70m +, W 0.99m, D 0.21m
Stone type: pale sandstone
Place of discovery: NH 8555 7471
Present location: in situ in field near Shandwick village.
Evidence for discovery: first recorded by Cordiner in 1776, when it stood intact on the edge of a terrace. After it was blown down, breaking into three pieces, around 1846, two fragments were clamped together (the third basal part was presumably still below ground) and set upright in a rectangular slot in a large stone slab. In 1988 the stone was removed and conserved, prior to being re-erected in a large glass pavilion, and the immediate area was excavated, without finding the original base of the stone. Nearby there was a burial ground last used in 1832.
Present condition: very badly weathered at the top and the lower right-hand part of face A. The very top of the slab is missing as is the base, and what survives of the base is trimmed at either side.
Description:
This is a very substantial slab carved in relief on both broad faces but not on the narrow faces. It is rectangular but the side-arms of the cross on face A project slightly (15mm) to interrupt the vertical line of the sides, and the original top was raised above the upper arm of the cross. Faces A and C are bordered by plain flatband mouldings and face C is divided into panels by flatband mouldings. Face A is treated as one large panel of intricate ornament. The upper part of face A is dominated by a raised cross with rectangular terminals to the arms and wide shallow armpits with a central cusp. The cross is filled with double linked rows of raised spiral bosses, with four bosses creating a cruciform shape at the centre of the head. Flanking the upper arm on the left is a quadruped with an elongated neck turning back with ears sprouting interlace knots, and a foreleg extending into interlace beneath its belly. The area to the right of the upper arm is defaced. Beneath the side-arms are winged angels each placed within a frame of cable moulding, and figure-of-eight knots to fill the space between the angel vignettes and the top of the cross-shaft. Below the angel on the left is a boar facing left and trampling a small human figure, below which is a quadruple knot of zoomorphic interlace. On the right of the shaft, below the angel, is a lion above a knot of four serpents with fishtails. Below the base of the cross there was originally an intricate design consisting of four animal-headed serpentine creatures forming four circles filled and surrounded by dense interlace emanating from their own bodies, but much of the right-hand area of this ornament is defaced. At the foot of the slab as it survives are parts of two unenclosed panels of key pattern, both diagonal and spiraliform.
Face C is divided into eight distinct panels separated by flatband mouldings. The top panel is much weathered but clearly contains a double disc symbol filled with spirals. The next panel contains a Pictish beast symbol facing left, all its extremities ending in spirals and its lappit formed of T-bar fret. Three dwarf quadrupeds frolic beneath its head and body. The third panel is busy with naturalistic snapshots, each with a story for the viewer: a hunting scene runs along the top with horsemen, hounds and deer, and a large central hunter on foot, below are other forest animals including a boar, while at bottom right is a crouching archer aiming for an apprehensive stag. In the opposite corner are two large confronted warriors armed with shields and swords, and in the centre a pair of bulls head to head.
The fourth and largest panel displays a glorious roundel of swirling spirals with hidden cruciform shapes amongst them. Below this there are two square panels, the left with two pairs of encircled interlace knots and the right filled with diagonal key pattern. They are partially obscured by the base in which the slab is set, and totally hidden below them are two more panels, this time rectangular. The left panel contains four intertwined serpentine creatures, and the right has another four arranged in a different and more complex interlace, and all the serpents have median-incised bodies.
Date: ninth century.
References: Cordiner 1780, 65; ECMS pt 3, 68-73; Henderson & Henderson 2004, 44-8, 77; Fraser 2008, no 128.
Early Medieval Carved Stones Project, A Ritchie 2017.