A prehistoric standing stone which was inscribed with symbols in Pictish times. 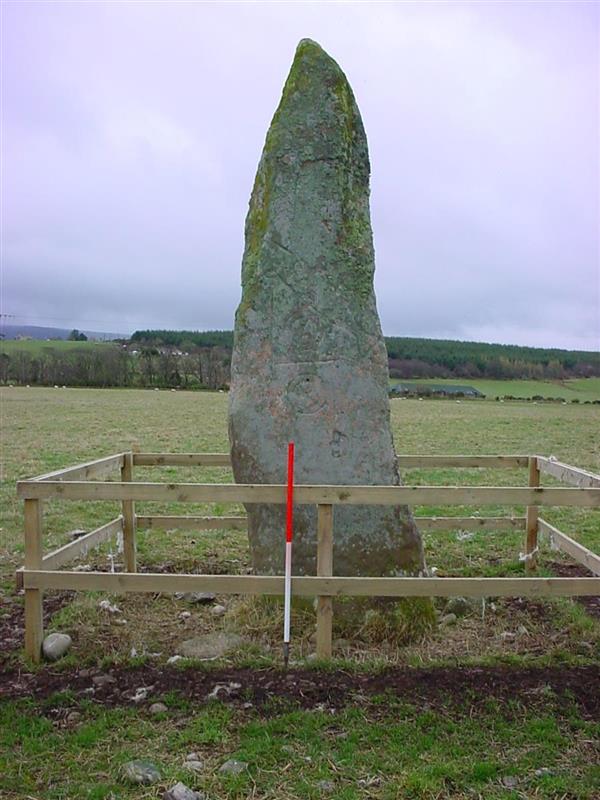 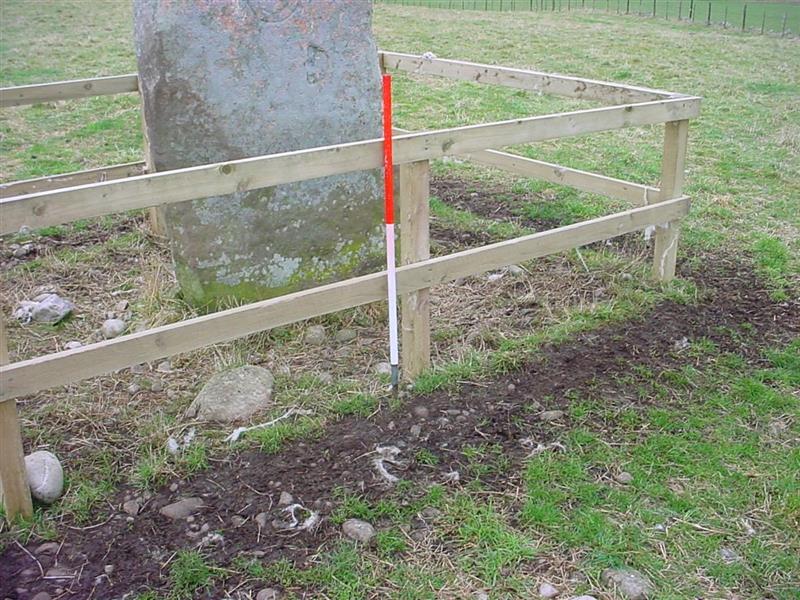 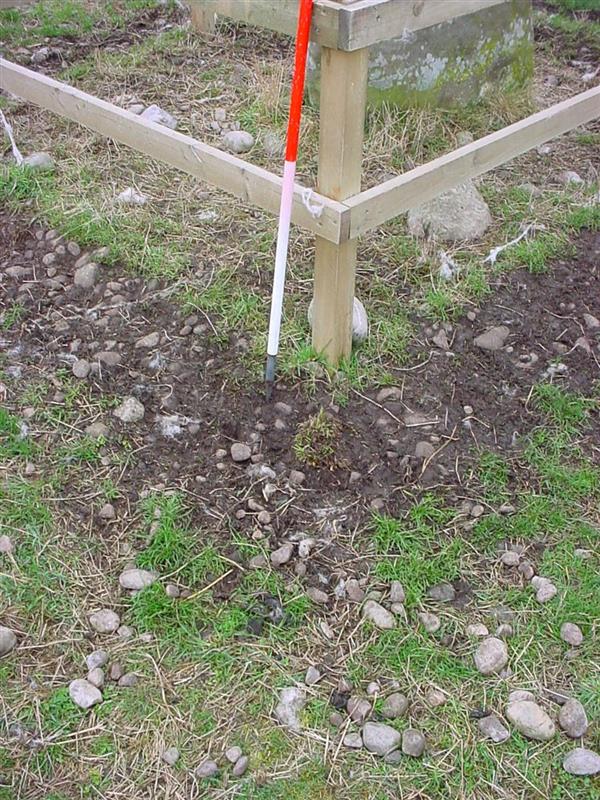 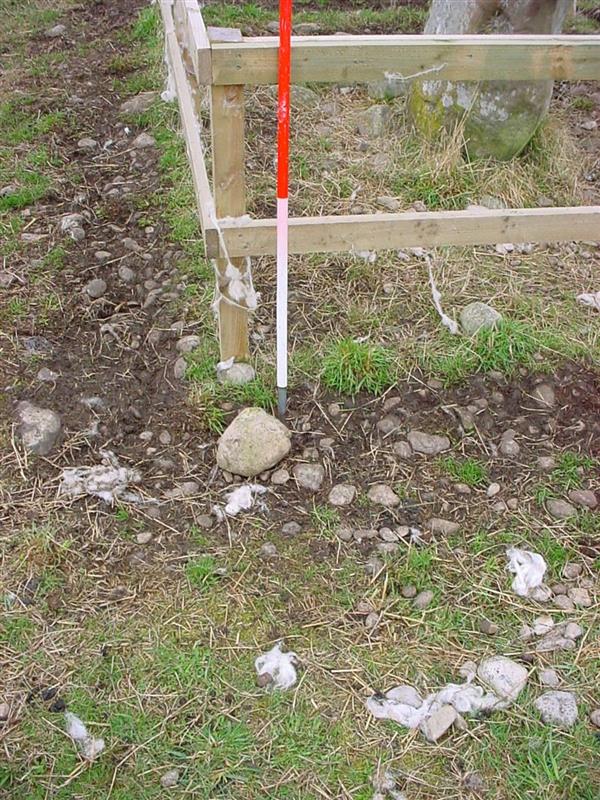 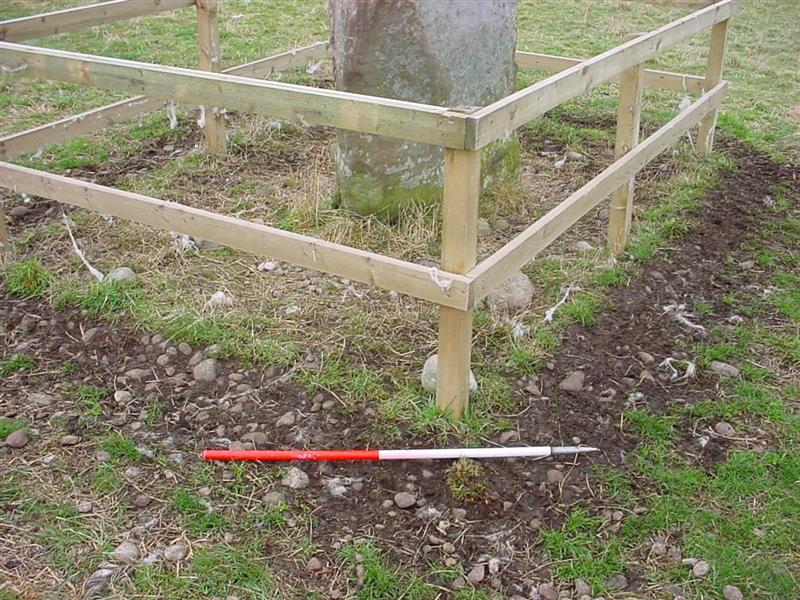 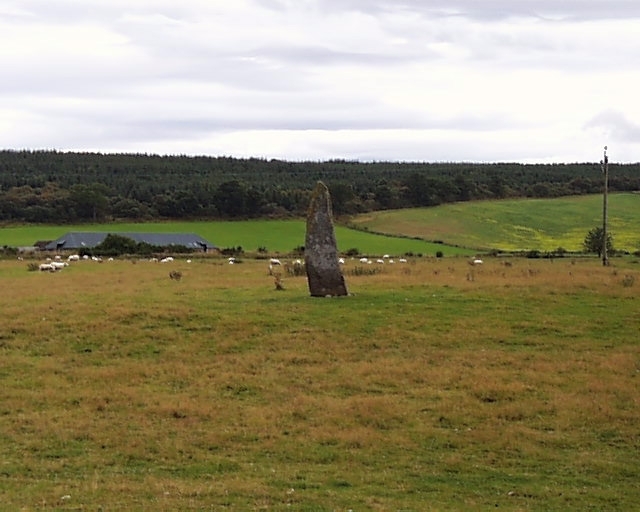 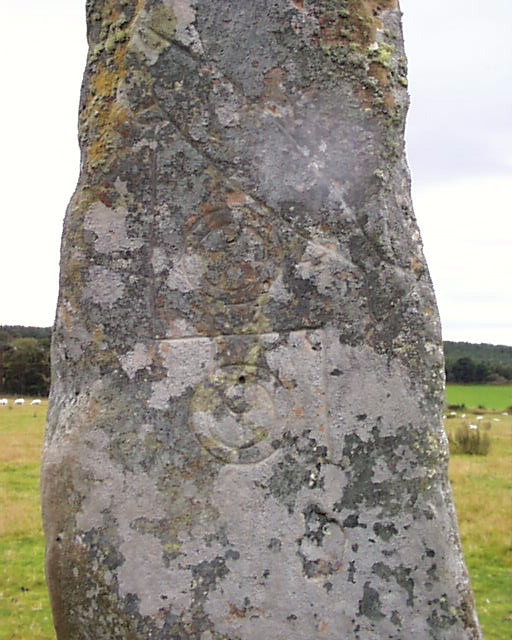 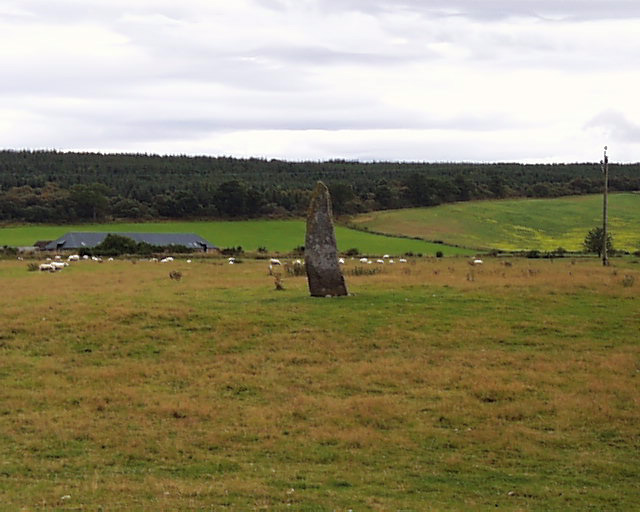 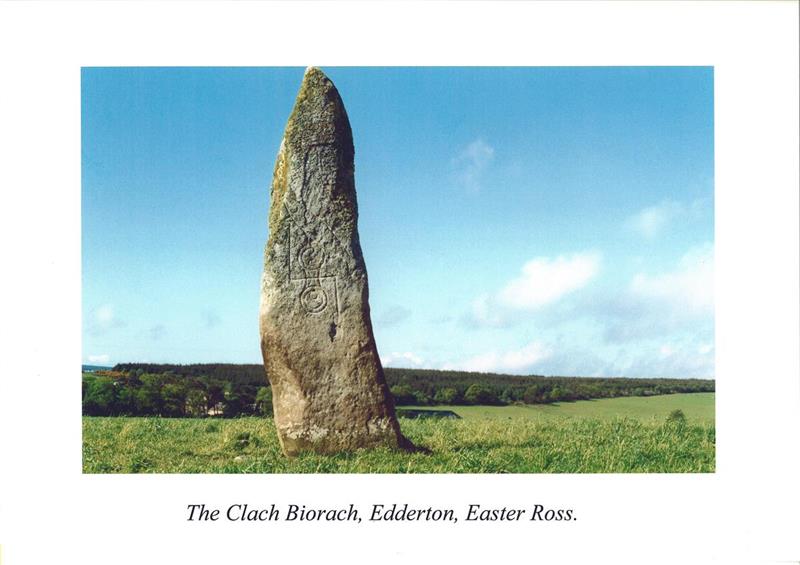 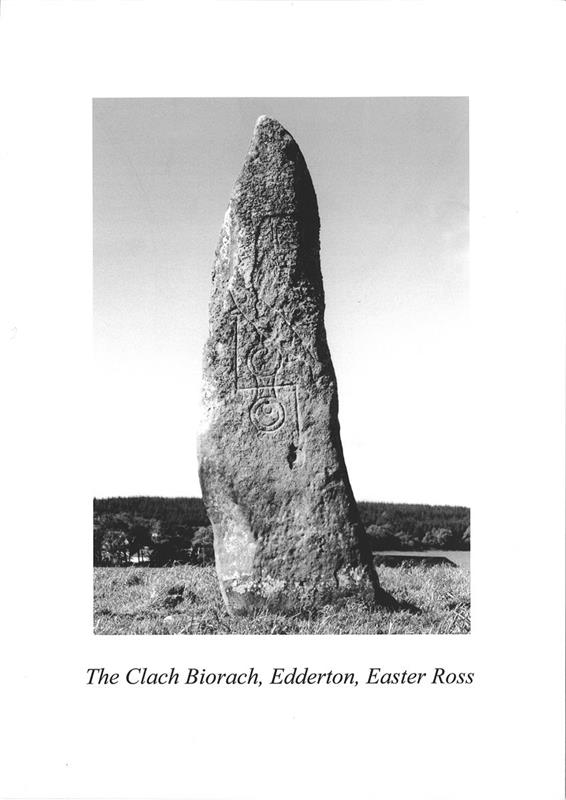 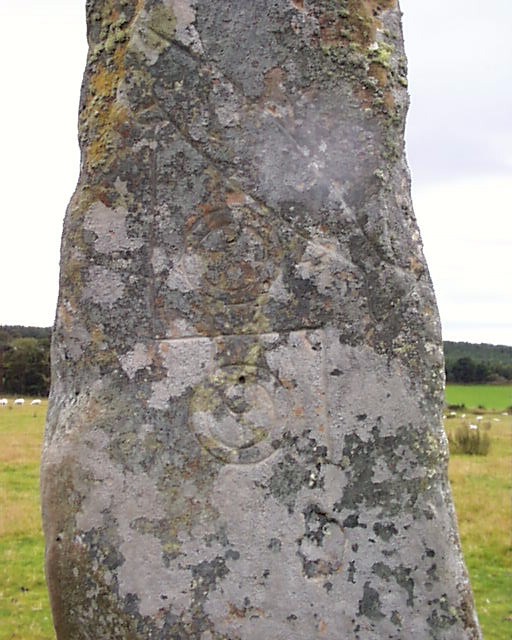 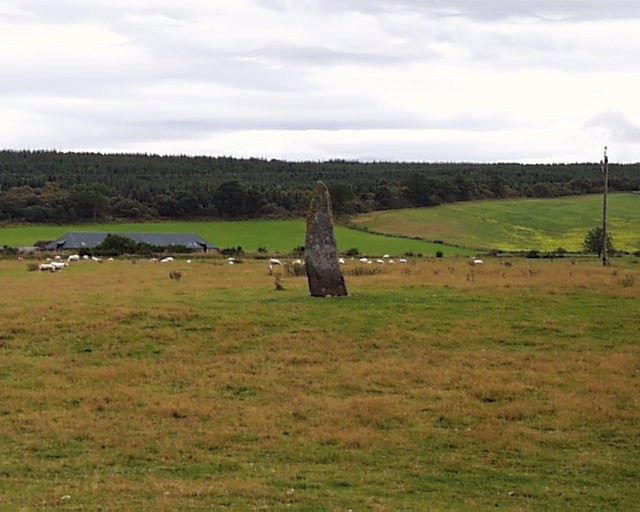 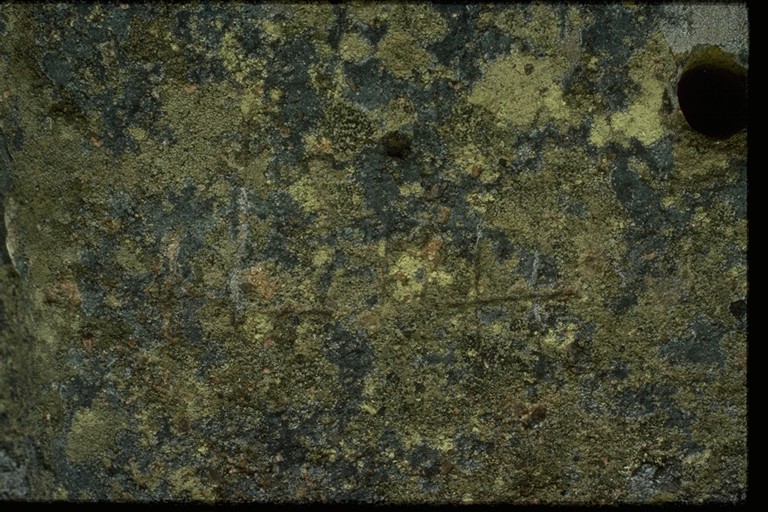 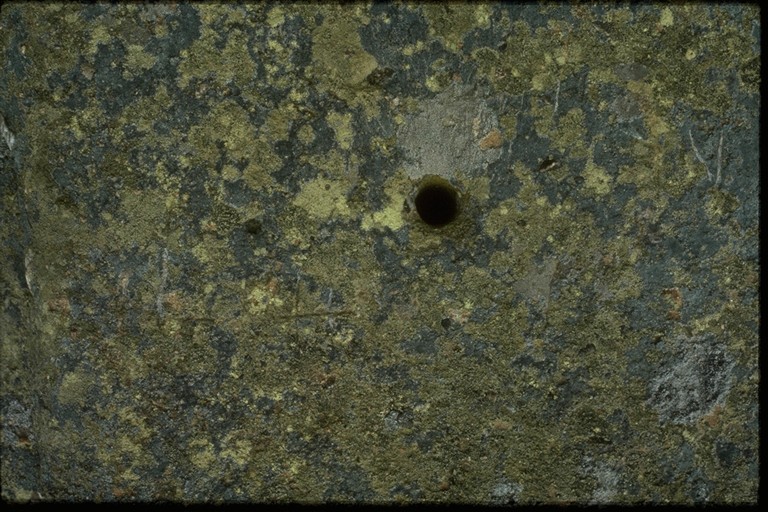 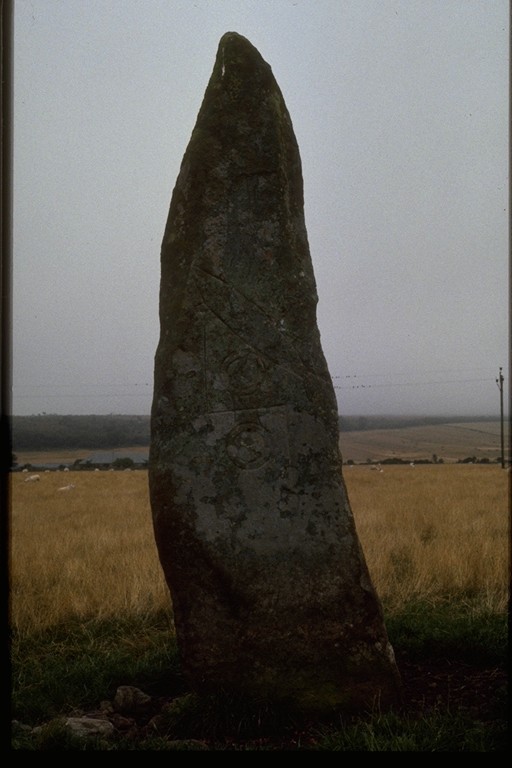 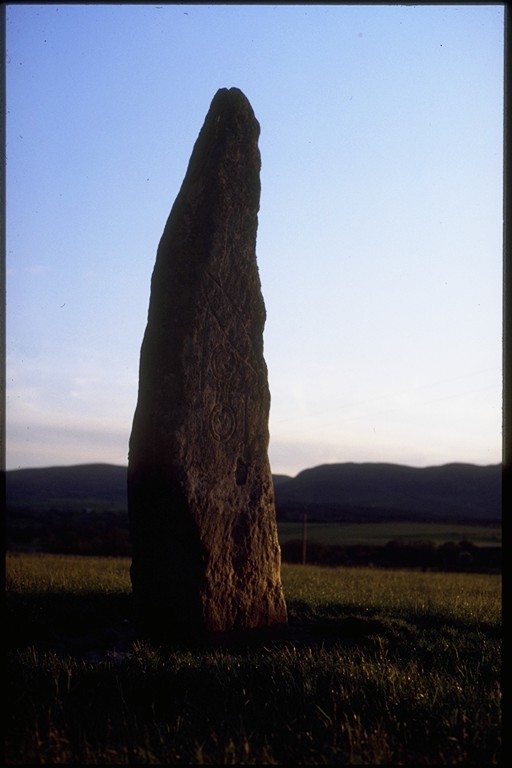 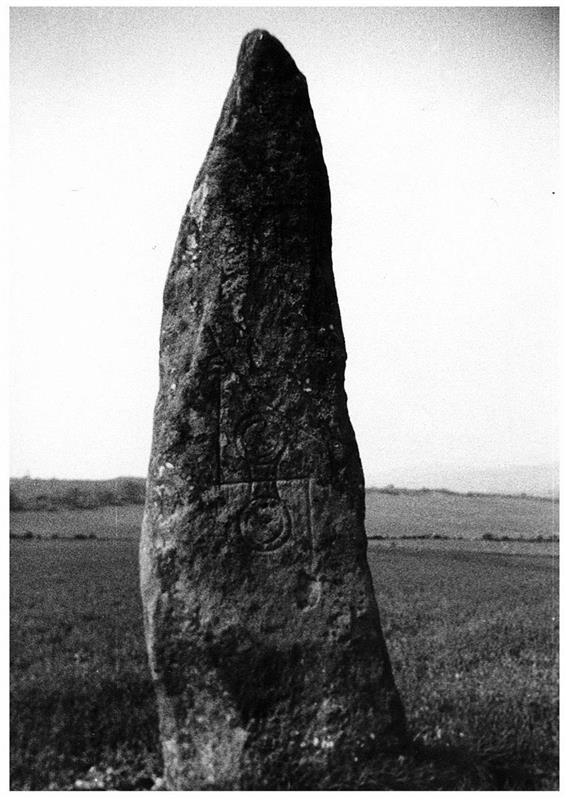 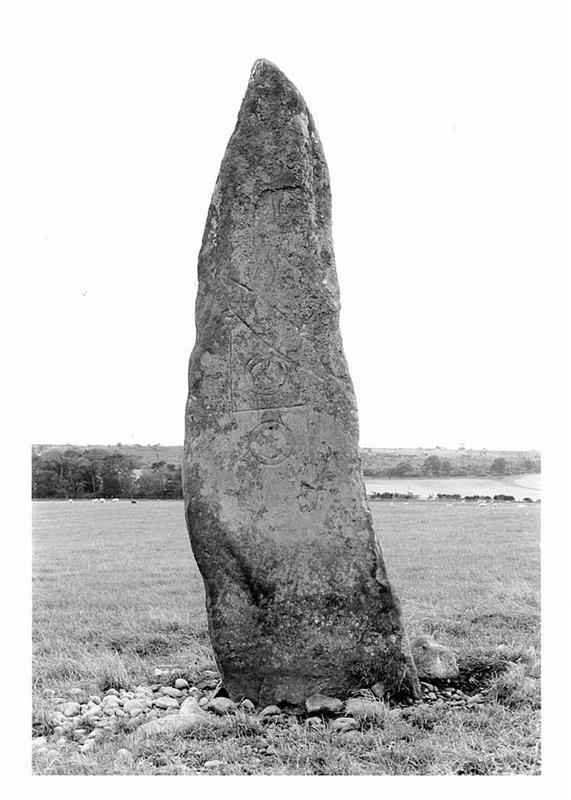 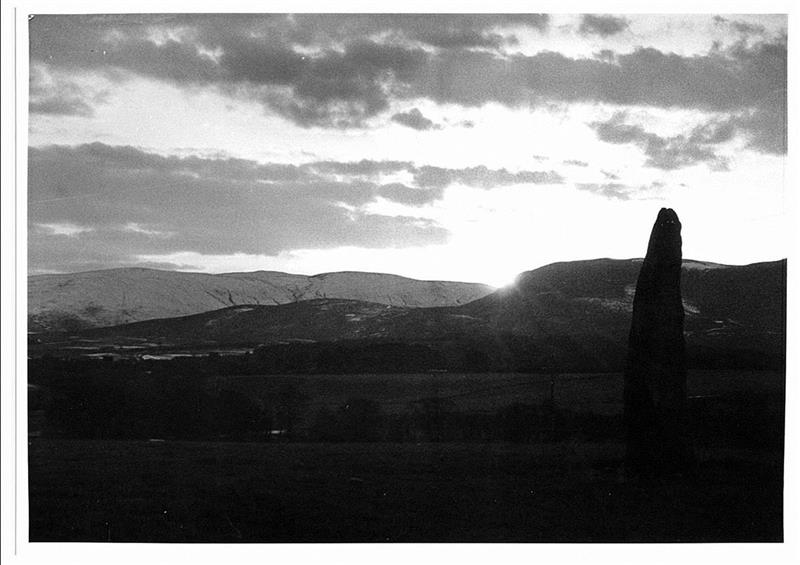 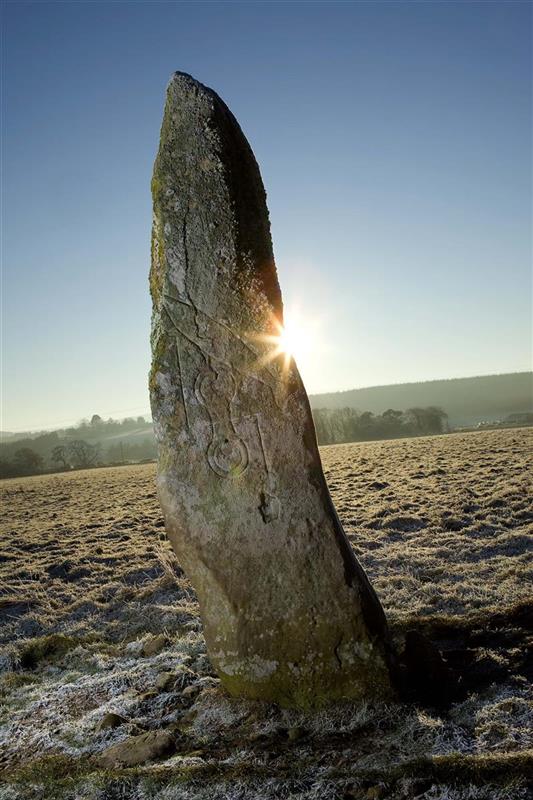 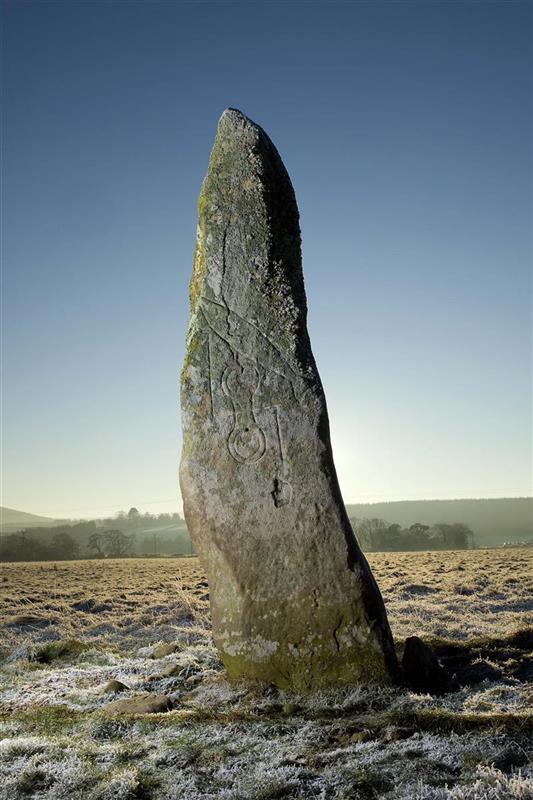 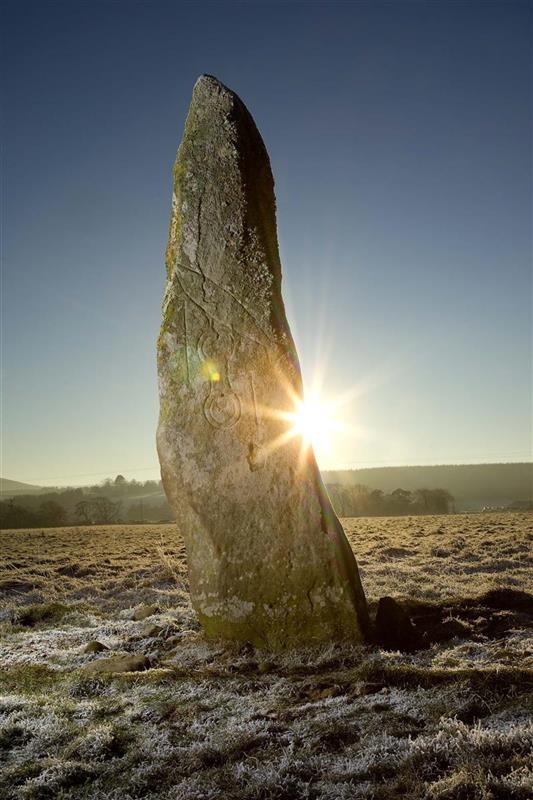 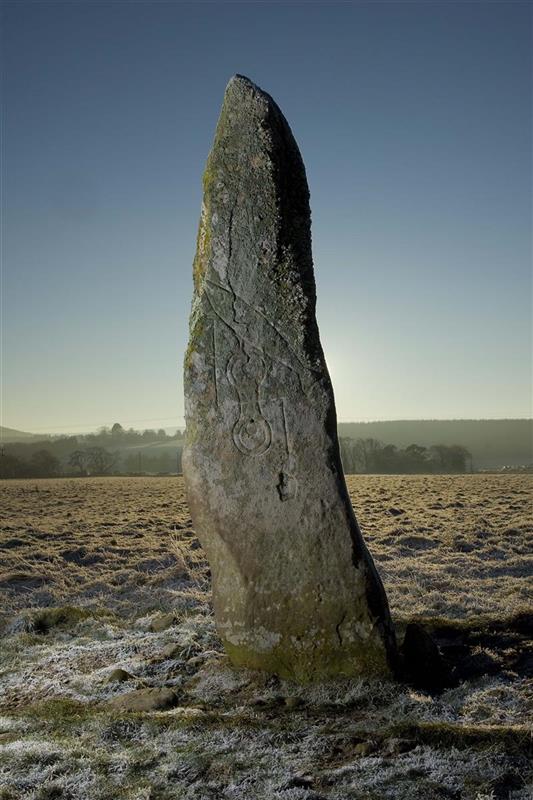 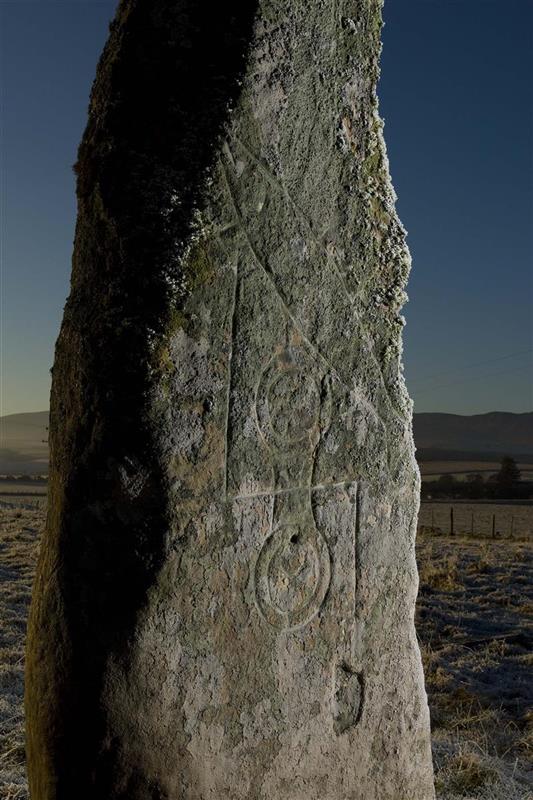 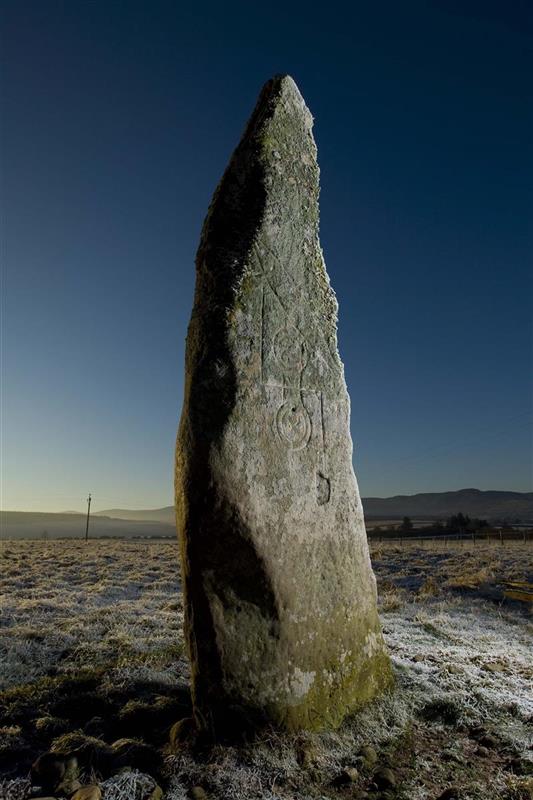 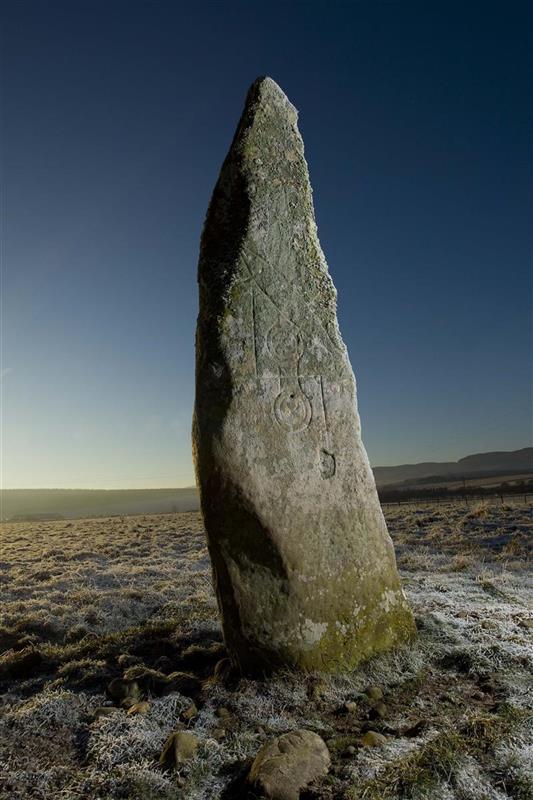 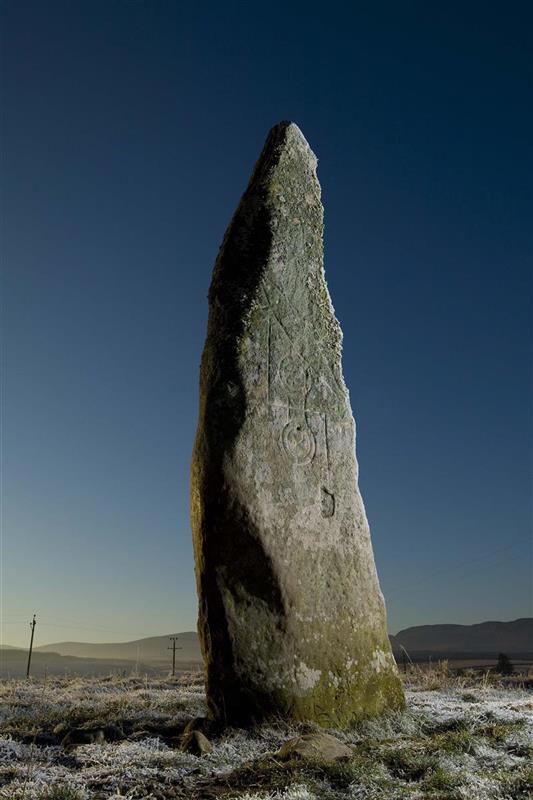 According to the Rev. Charles Cordiner the stone stood 'on a circular mount, artificially raised with steps of earth, at Cariblair in Ross-shire.'
C Cordiner 1788.

An unhewn pillar of red sandstone narrowing to a point at the top - whence the local name 'Clach Biorach' - 'the sharp stone'. Sculptured on one side only, it is 10ft 3ins high by 3ft 6ins wide and 1ft 6ins thick at base (Allen and Anderson 1903).
There is a circle surrounding stone at a radius of 3 yards, and 2ft above the surrounding plain. Supposed to mark the grave of a Danish prince killed in nearby battle.
NSA (D Gordon - 1840, pg.448) 1845; J R Allen and J Anderson 1903.

This large symbol stone is as described by Allen and Anderson.
It is oriented NW-SE but there is no trace of a circle round it. Gordon (NSA 1845) is probably confusing this site with NH78NW 1. Visited by OS (W D J) 17 May 1963.

This Class I symbol stone bears fish symbol over a double-disc and Z-rod. J R Allen and J Anderson 1903

Almost certainly a re-used earlier standing stone, due to its relationship with cairn to east and alignments <1>

Historic Scotland proposed to reschedule this monument to meet modern standards of documentation. <2>

The monument was rescheduled on 2 November 2011, with the official name of Clach Chairidh. <3>

A detailed description and statement of national signficance can be found on Historic Scotland's website (see link at the bottom of this record). It is described by Historic Scotland as a standing stone which was erected probably in the Neolithic or Bronze Age period, between about 4000 BC and 1500 BC. It was re-used some time between 500 AD and 700 AD when Pictish symbols were carved on it. The three symbols consist of a large and well-defined leaping salmon, a double disc and a Z-rod.
The stone stands to a height of approximately 3 metres measuring about 1m by 0.5m at its base. It tapers to a natural point, as per the alternative name of "Clach Biorach", "the Pointed Stone". Around the base of the stone is a spread of apparent cairn material consisting of small and medium-sized rounded stones.
An association is noted between Clach Chairidh and the Winter Solstice, which aligns with a prominent gap in the hills to the north. It is suggested that Clach Chairidh may have been an outlier associated with the nearby stone circle.
A local tradition is noted which asserts tht the stone marks the grave of Carius, a Danish prince killed at this spot in a skirmish with the Pictish inhabitants of the area.
Historic Scotland notes that there is high potential for the survival of buried evidence relating to the original erection of the stone as well as traces of other activities and rituals around the stone in prehistoric and early medieval times. <4>

Edderton 1 , Clach Chairidh, Ross & Cromarty, Pictish symbol stone
Measurements: H 3.13m, W at base 1.07m, D at base 0.46m
Stone type: red sandstone
Place of discovery: NH 7082 8507
Present location: in situ in a field.
Evidence for discovery: first recorded (inaccurately) by Cordiner in 1780.
Present condition: weathered.
Description:
This pointed pillar stone is likely to have been a prehistoric standing stone, an outlier for the nearby stone circle, which has been re-used as a Pictish symbol stone. Incised on its north face are two symbols, a salmon above a double disc and Z-rod set vertically. Cordiner shows a circle below on the left, which is no longer visible but could have been part of a mirror.
Date: seventh century.
References: Cordiner 1780, 119; ECMS pt 3, 57-9; Fraser 2008, no 121.
Early Medieval Carved Stone Project, Compiled by A Ritchie 2017