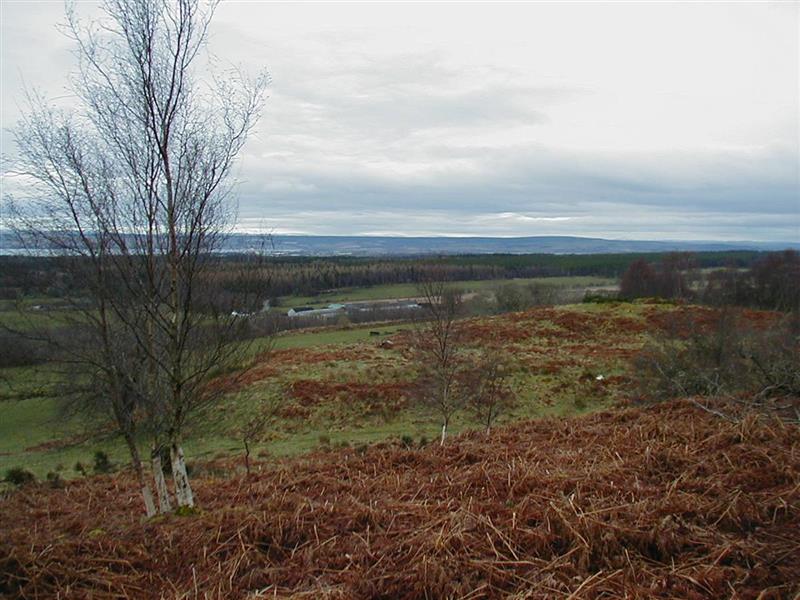 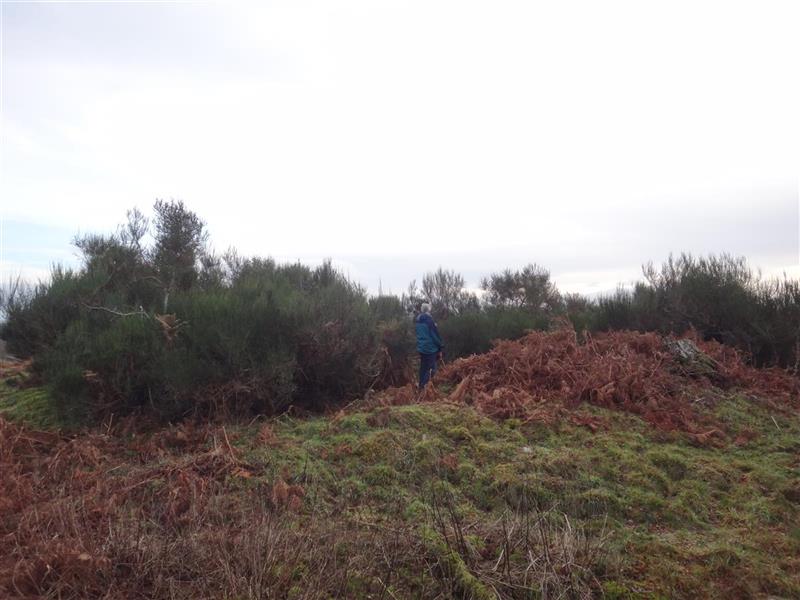 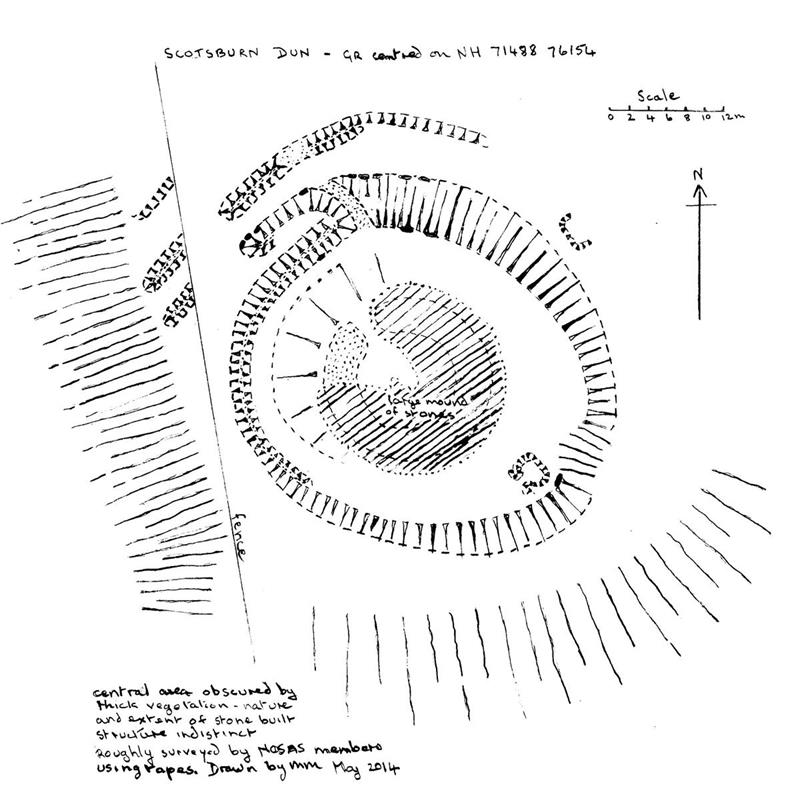 Dun (NR) OS 25" map, (1968)
In cleared woodland on a grassy eminence which is bordered by a ravine in W and by natural slopes in S, is a dun, within a sub-circular outer defence, augmented by additional outworks to NNW at easiest approach.
c13m diameter between the centres of a mutilated rubble wall, surviving to a max height of 1m internally and 2m externally, spread to c7m wide. No wall faces can be seen, and small size of stones suggests a timber-laced construction. An outcrop is incorporated in wall in SW. The entrance is in NNW. Within dun is a depression choked with stones; it may have been a well.
The outer defence, enclosing an area c35m diameter, survives in W as a ruinous wall spread to c2.5m, with occasional facing stones visible suggesting a wall thickness of c2m, and elsewhere as a stony scarp c2m max height. The entrance is in NNW, coincident with dun entrance. The base course of outer wall face can be seen at foot of scarp to E of entrance, and 3 inner facing stones in roots of a tree suggest that wall was c6m wide at this point. W side of entrance is formed by wall turning outwards then back to SW to end on brink of the ravine. Outer facing stones are visible intermittently for about 8m. The outermost defence in the NNW protecting the entrance is another ruinous wall commencing at ravine and running parallel to the inner defence for a distance of c40m before petering out. There are indications that it may have continued to encircle the dun, but this is uncertain. There is an ill-defined break opposite the other entrances. In NE and SE are two depressions, probably later quarry scoops. ISSFC 1902; Visited by OS (N K B) 23 November 1970.

Undoubtedly this defensive work can be considered as a broch based on its size and shape, but the total absence of any exposed facing stones and structural details, and the incorporation of rock outcrop in the wall suggests that it is more likely to be a dun. Only rubble stones are visible, hence the suggestion that the wall may have been timber-laced. Visited by OS (N K B) 10 March 1981.

The site was visited by R Spencer-Jones of NoSAS on the 18th of December 2013. At the time of this visit, the site was heavily overgrown with gorse and vegetation, making it very difficult to get through to see the details of the circular structure. A break in the vegetation on the western side allows entry to the sunken area. The surrounding 'defences' of walls and platforms were easier to see although the vegetation obscured any distinguishing features to suggest whether this was the site of a dun or a broch. Although, Spencer-Jones noted that as it was situated on a low ridge, part way down a slope it would suggest that this was a broch site rather than a hill-top dun. <1>

The site was visited by members of NoSAS on the 14th of May 2014. Bracken was cleared from the site at this time and a rough survey using tapes, pacing and GPS readings was carried out. It was also noted that there could possibly be a central stone built structure but this was not determined due to thick vegetation. A plan of the site was also produced. <2>

As part of the Northern Picts Project surveys and excavations have been undertaken from 2012 to 2014 on six Atlantic roundhouses on the Tarbat Peninsula, to track the nature of settlement in this landscape in the first millennium BC to AD. Work was undertaken at this site from 8–31 July 2014 directed by C Hatherley as part of phD research. Prior to excavation the upstanding remains of a large thick-walled dry-stone walled roundhouse could be identified on the summit of the hillock, previously referred to as both a broch and a dun. Encircling the house is a series of well preserved outworks, which include a stone enclosure wall that surrounds the roundhouse, which in turn is flanked by two earthen banks and ditches which can each be traced to the edge of the ravine. A break in the outworks at the N indicates the likely position of an entrance through the enclosures. Due to heavy vegetation and extensive piles of rubble, the exact dimensions of the house and its walls or location of its entrance has yet to be identified, but is c15m. A 20 x 2m long evaluation trench was positioned across the outworks and the wall of the roundhouse. The wall of the roundhouse was not excavated but the upper surface was exposed by de-turfing and removal of loose rubble. The wall was 4.2m wide and consisted of an inner and outer wall with a probable intra-mural void, c1m wide, located between them. Between the wall of the roundhouse and enclosure wall a 7m wide area with well preserved evidence of extra-mural activity surrounding the roundhouse was exposed. The foundations of two thin dry stone walls were partially exposed, a linear wall running almost parallel to the roundhouse wall and a curvilinear structure with a flagstone floor. Cobbled surfaces, thick layers of charcoal-rich occupation deposits and extensive areas of daub and turf suggest that these walls are the stone bases of turf and timber structures. A mortar stone was recovered from the surface of one of the occupation horizons between the structures, along with extensive deposits of burnt grain. Between the enclosure wall and the inner earthen bank was a 3m wide heavily ironpanned metalled surface. Rutting and repeated repair on its surface suggested it was a well used route into the complex. Between the inner and outer bank and beyond the outer bank two rock-cut ditches showed signs of re-cutting and shoring with stone-slab revetting. Other indications of an extended period of occupation of the enclosed areas beyond the house was the repair and remodelling of the enclosure wall on two separate occasions and the consolidation of both earthen banks with stone revetting. The date of its construction is unknown but, given the suite of radiocarbon dates obtained, is likely to have been occupied by the mid to late 1st millennium BC. <3>

NOTE: The 1st and 2nd Edition maps label this site as a cairn at which human remains were found in 1865. It is possible that the human remains were actually found at the chambered cairn site just to the northeast, but this is pure conjecture.