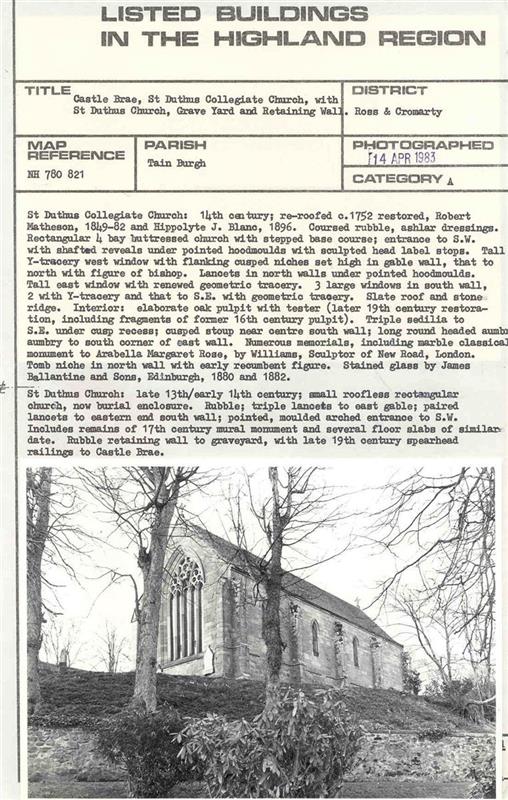 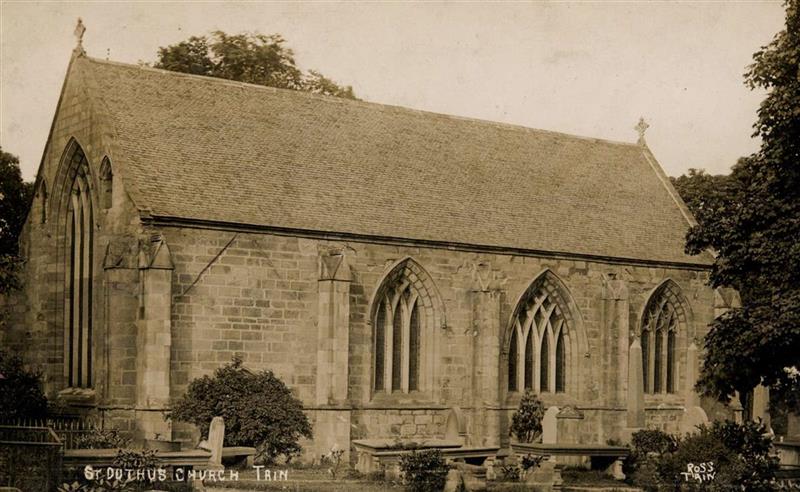 The former medieval parish church of St. Duthus, Castle Brae, Tain. See MHG8689 for the former Collegiate church to the northwest and MHG31333 for the burial ground.

Small structure unroofed within later cemetery. Propped up with timber over doors and fenced and marked as dangerous - HAW 8/2004

The statutory designations were reassessed by Historic Environment Scotland in 2018 as part of their Dual Designations Project. It was judged that the collegiate church would remain as a Listed Building (as well as the boundary walls to the burial ground) but that it would be removed from the Scheduled Monument. The latter would consist primarily of the unroofed former medieval parish church and the burial ground itself. <1>

The proposed changes by Historic Environment Scotland came into effect on 28/08/2018. The scheduled monument consist of the remains of a medieval church with associated burial ground. The church is likely to have been the original parish church of Tain and may date to the 13th century. The church is surrounded by a burial ground which contains a number of coped medieval grave markers as well as later memorials. A short distance to the north of the remains of the parish church, and still within the burial ground, is the roofed late medieval St Duthus's Collegiate Church. The monument is located in the burgh of Tain, on the edge of a raised beach sitting above the Dornoch Firth. The church building survives as a simple rectangular structure that measures 10m east-west by 4m transversely. It appears to have been truncated at the west end reducing what would have been a more typically elongated church building to the current dimensions. The northern wall appears to have been partly rebuilt toward the west end and the whole structure may have been reduced in height when it became a burial enclosure for the Ross family. The east wall has a triple lancet window (this may be re-used material), and the south wall has a pointed-arched doorway cutting into the blocking of a round-arched window. The scheduled area is irregular on plan to include the remains described above and an area within which evidence relating to the monument's construction, use and abandonment is expected to survive, as shown in red on the accompanying map. The scheduled area excludes the former Collegiate Church of St Duthus (see separate designation - Listed Building Number 41843), burial plots where rights of burial exist, railings, the above ground elements of all post-medieval gravestones, and the top 200mm of all paths. <2> <3>