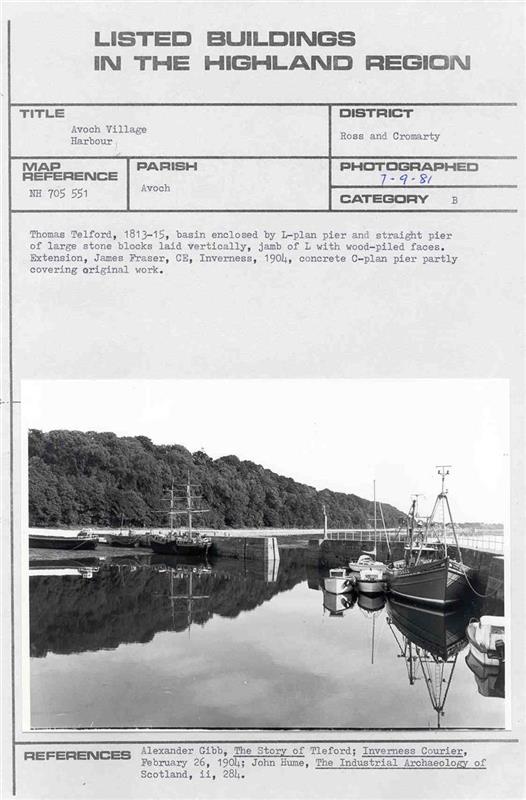 (Location cited as NH 705 551). Avoch: in 1795 good anchorage was noted between Seatown of Avoch [location not etablished] and Castletown Point [Castleton: NH 693 537], and except in southerly or south-easterly gales craft could lie safely and work cargoes on Seatown beach. A pier was built in 1814. The OS 1:2500 map of 1873 shows a 30yd (27.4m) long quay, from the W end of which a pier projects just over 56yds [51.2m] at right angles, ending in a return head parallel with the shore quay, also 30yds (27.4m) long. These measurements correspond with those of the harbour at Avoch which T Telford is recorded as having built between 1813 and 1815.

Structure
The modern road (A832) from Inverness to Fortrose is separated from the head of Avoch harbour only by a sea wall. The damaged footage of this wall is of red stone block construction, like that of the inside face of the pier to the W. There are flights of steps inset in this face near each end. Part of the face, towards the sea end, is built of smaller dark red blocks, neatly coursed and much worn. The whole face slightly battered, and is in much better repair than the sea wall, though broken at the corner where the two once joined at an oblique angle. The debris here may be that of a former slipway. Modern extensions have replaced or obscured the rest of Telford¿s harbour.
A Graham and J Gordon 1988. <2>
A Gibb 1935.

This harbour projects into Fortrose Bay to the E of the village NH75NW 94.
Information from RCAHMS (RJCM), 3 May 2005.

Black Isle Local Plan, Sept. 1985: P41/5.14. POLICY - The Council will encourage use of the harbour and associated land for marine related purposes. Any new buildings should be of a scale and character compatible with the Conservation Area. <3>

Information from participants in the Black Isles Heritage Memories project. Map for the area (surveyed in the 1870s) shows an additional pier to NE of the 'Old Pier'. By 1910 there was a single pier (1901 saw fundraising for new pier built in 1903). <4>