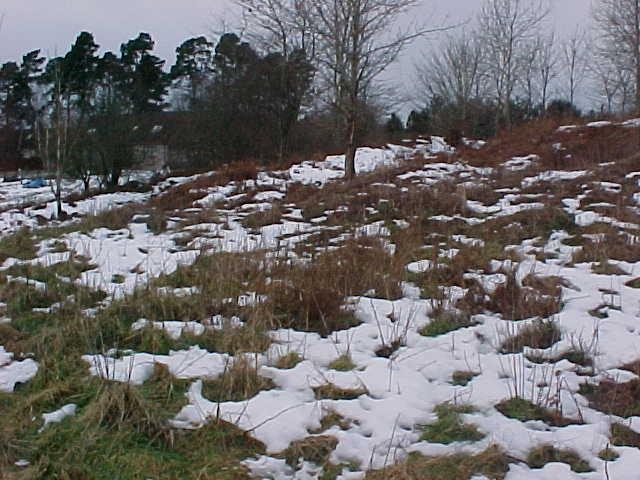 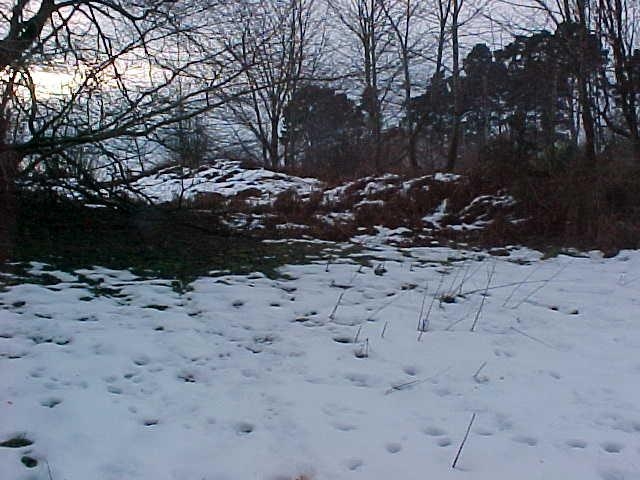 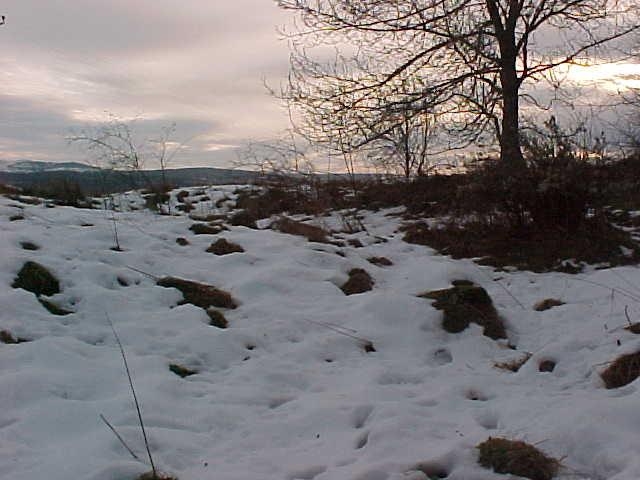 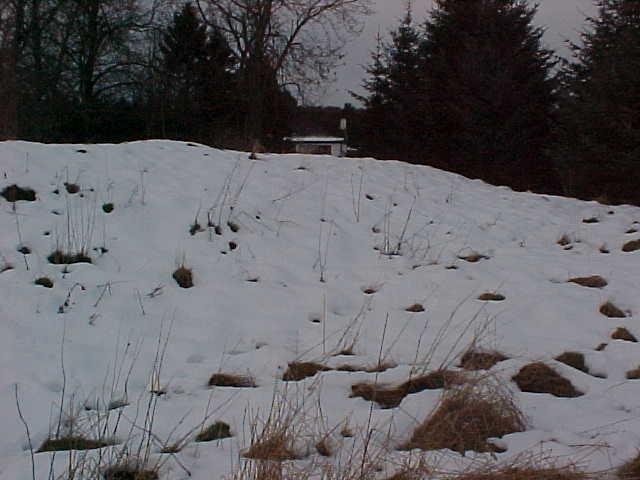 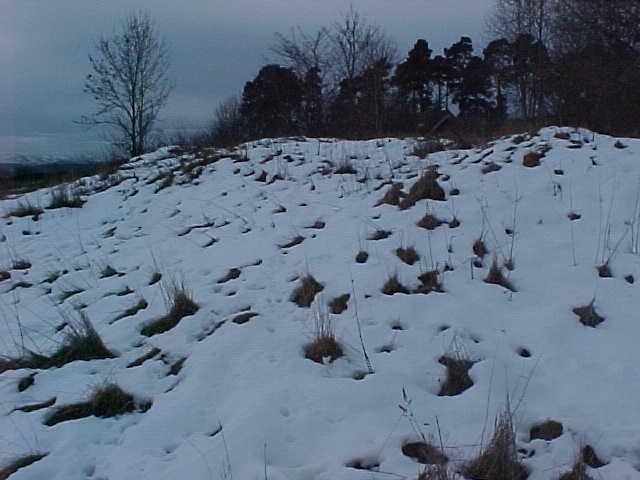 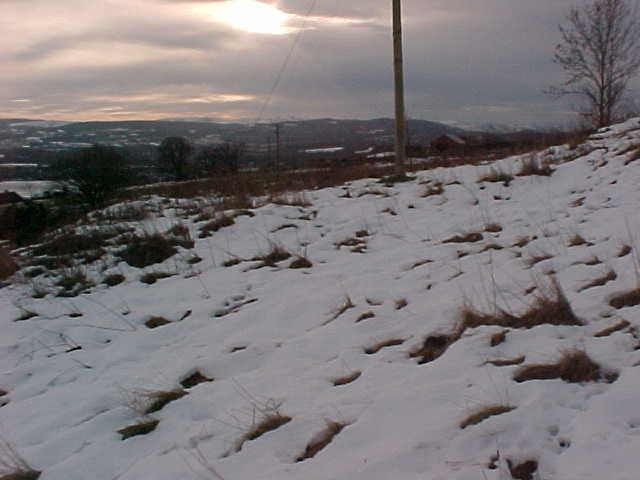 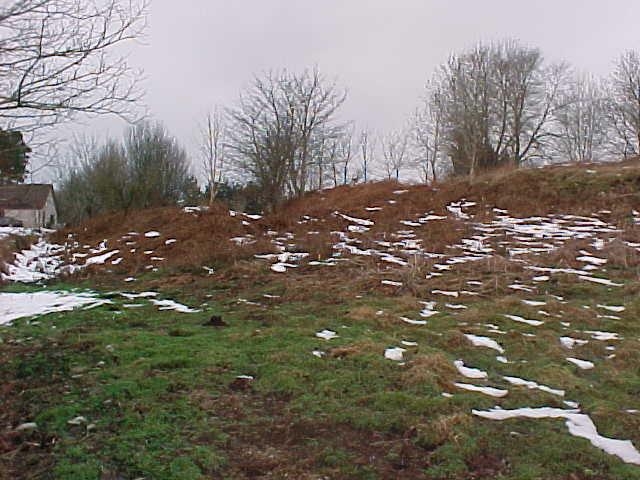 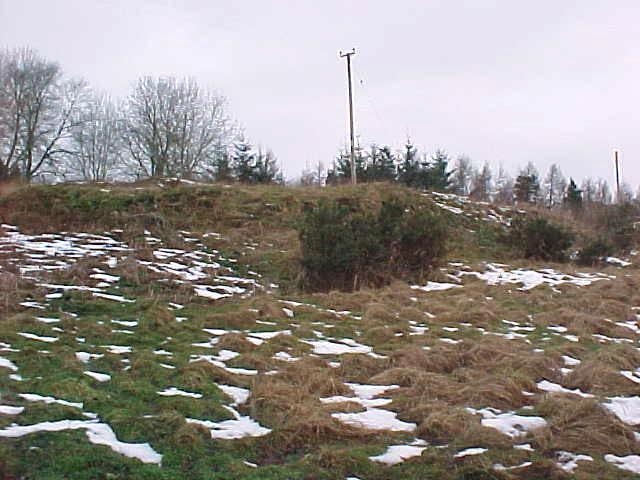 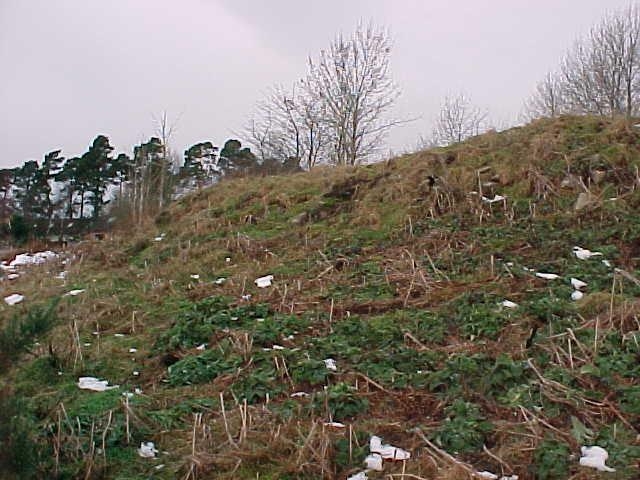 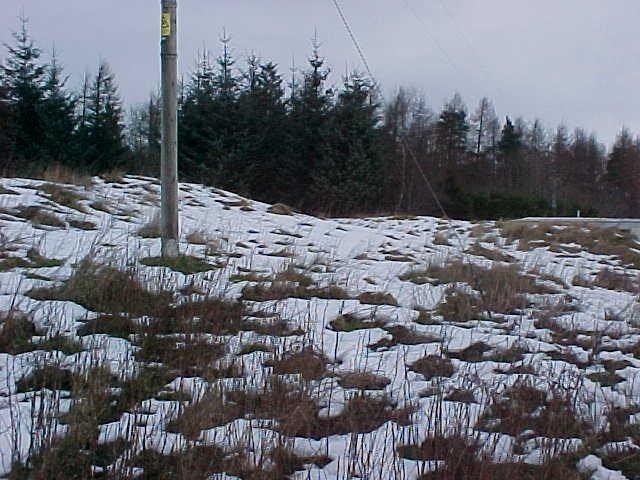 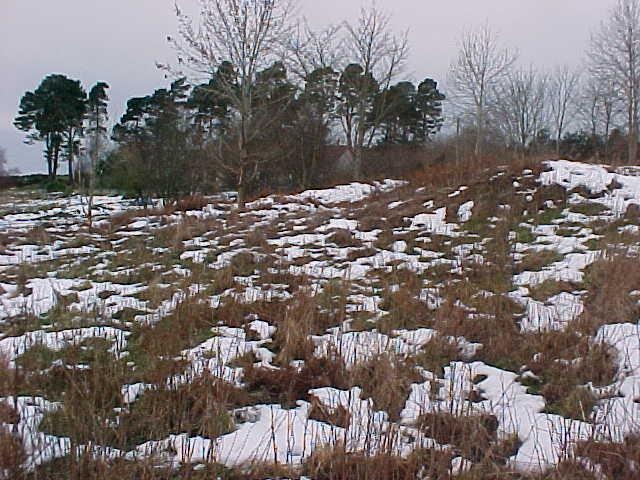 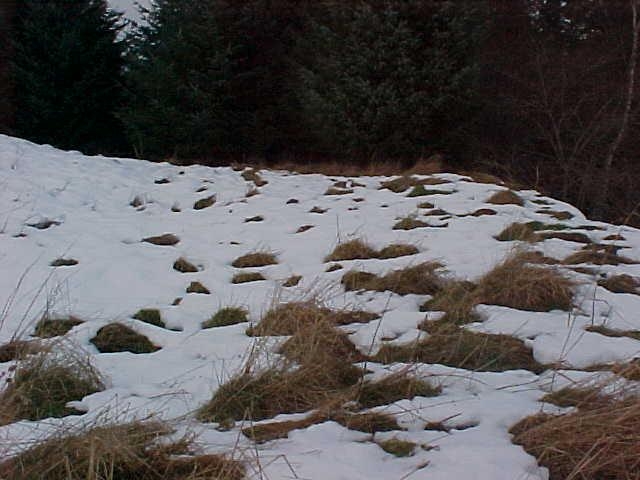 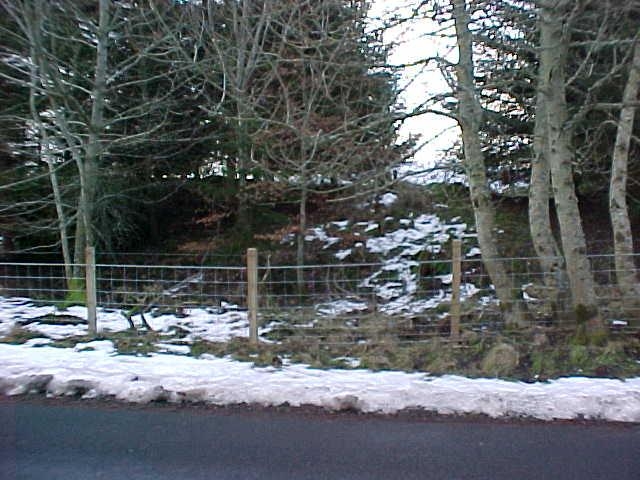 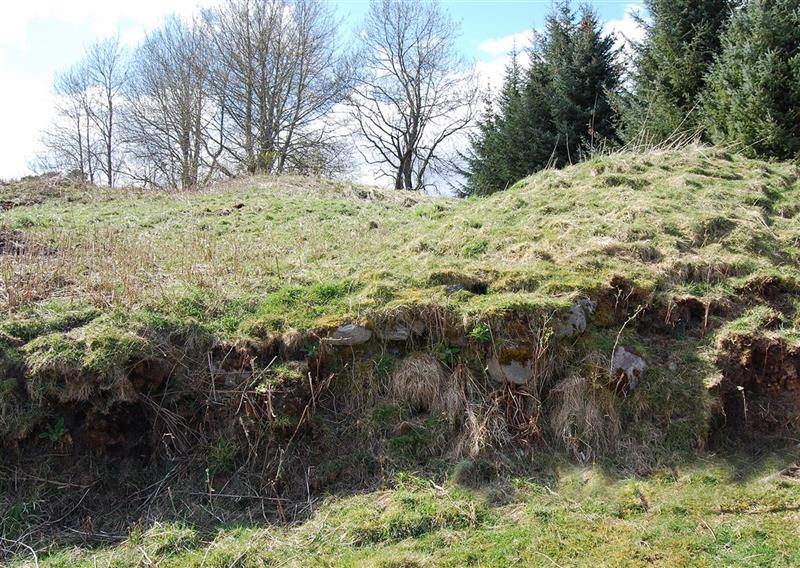 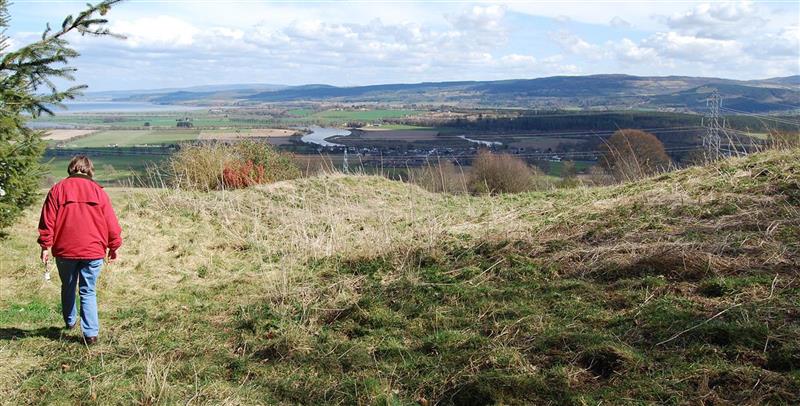 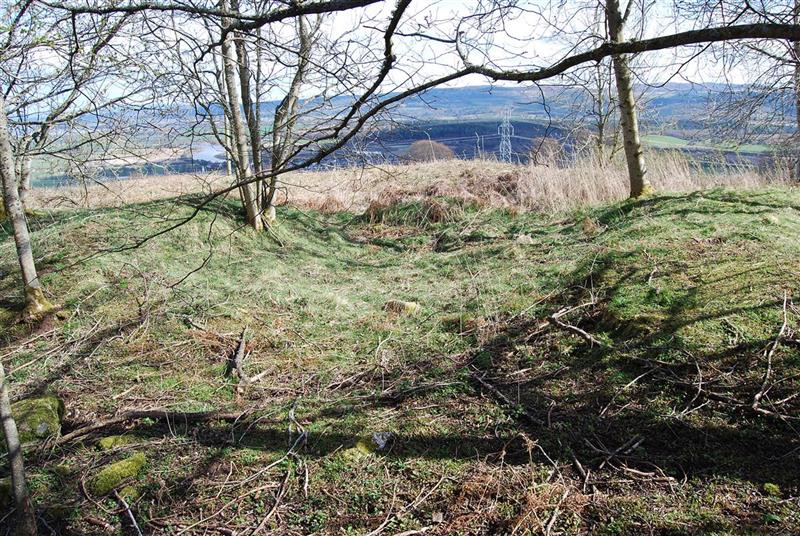 Dun Mor, described by Wallace (T Wallace 1918) as a fort, and by Jolly (W Jolly 1882) as a dun, is probably a cairn of unusual type. It is situated on a slight knoll in a prominent false crest position above Beauly at about 450 ft OD, and commands extensive views in all directions except the W. The knoll has been scarped to provide a level platform around the edge of which there is a bank spread to about 9.0 m, and measuring some 60 m from E to W by 54 m transversely from crest to crest. There are traces of a ruinous later wall along top of the bank. Roughly central to the platform is a circular cairn, 13m in diameter and 1.2 m in height, placed within a circular earthen bank measuring about 29 m from crest to crest, both much mutilated by later quarrying. Around edge of central mound and the inside of the inner bank are loose boulders which may be the remains of kerbs. One bears a single cup-mark, probably that boted by both Wallace and Jolly, although the former mentions three cups. Wallace describes the gaps between the banks, and the inner bank and the central mound, as ditches; this is incorrect
On the E scarp of the platform, below the rim, a short stretch of facing stones can be seen which coincide with a slight lowering of the platform hereabouts; also traces of a causeway leading to the central mound, which may indicate an original entrance, or possibly later access for stone robbing.
According to local tradition, Dun Mor is a burial place, but there is no local knowledge of any finds.
This is an enigmatic work, but its non-defensive situation and form rule out a fort or dun. The false crest position the deliberate creation of a platform, and the symmetrical layout of the banks and central tump, suggest an unusual type of cairn derived from Wessex or Orcadian forms (Ring of Bookan ?), or both.
Enlargment at 1:1250.
Visited by OS (A A) 5 January 1970

Dun Mor, the probable remains of a roughly circular dun and outworks. The dun is severely mutilated but its outworks, comprising double ramparts and ditches, are well preserved. The stone lying on the N arc of the inner rampart bears a single cup-mark. RCAHMS 1979

Dun Mor is generally as described and planned by F1, but his conclusions concerning its function are questionable; it would be premature to rule out a defensive purpose. There are two clear possibilities which are (i) a mutilated fort of dun now overgrown and spread to about 40.0 m in diameter, within a quarried inner bank and the afore-mentioned outer bank.
The evidence for a fortification are (a) the name, (b) the strategic position at the head of the Beauly Firth, and © the situation on a knoll with the outer bank sited to maximise the limited defensive potential. For a Wessex or Orcadian-type cairn, there is (a) the existence of a cup-marked stone (as described by F1), and (b) the
'false crest' position. The 'symmetrical layout' noted by F1 is illusory (see plan), and the 'circular cairn' central to F1's theory may be fortuitous residue from quarrying around it. The 'loose boulders' are unconvincing as kerb-stones, and there are no ditches. No structural remains are exposed in the central area, and Dun Mor cannot be classified with certainty without excavation. On surface evidence it seems more likely that it is a dun rather than a cairn.
Revised at 1:2500. Visited by OS (N K B) 8 June 1981

Photographs of this site have been submitted to the HER by Eddie Freeman. <1>