A hut Circle at Na-Tobhehtagan Breac, near Achiltibuie. 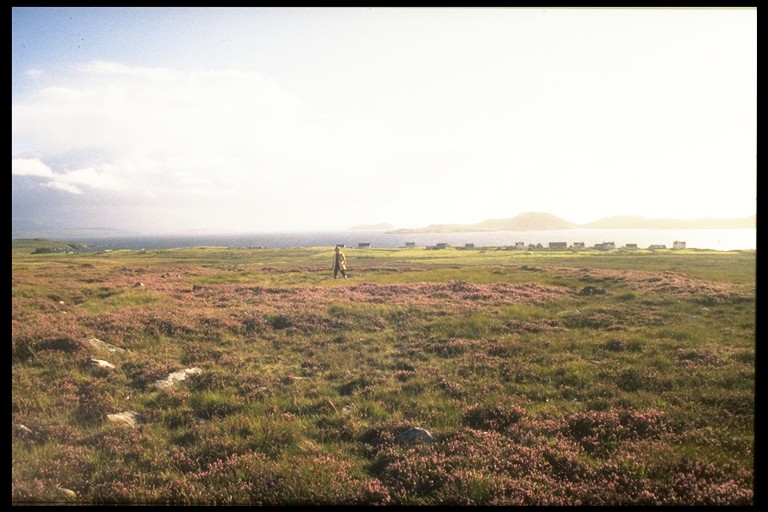 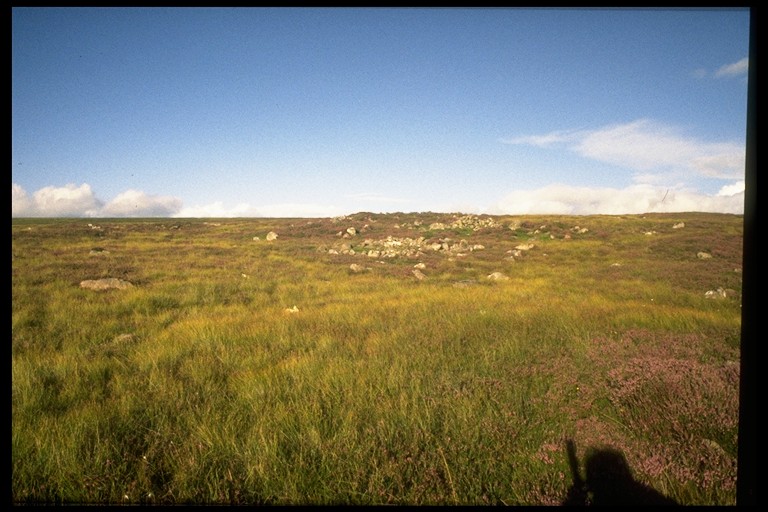 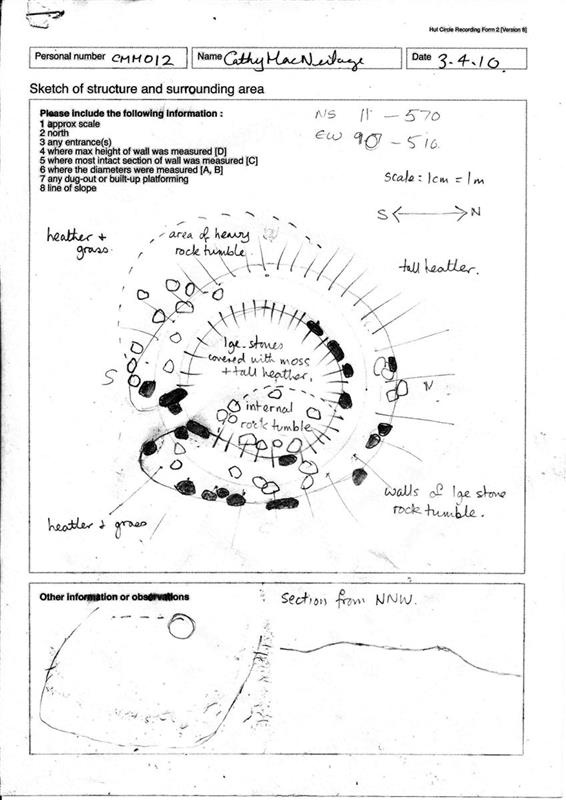 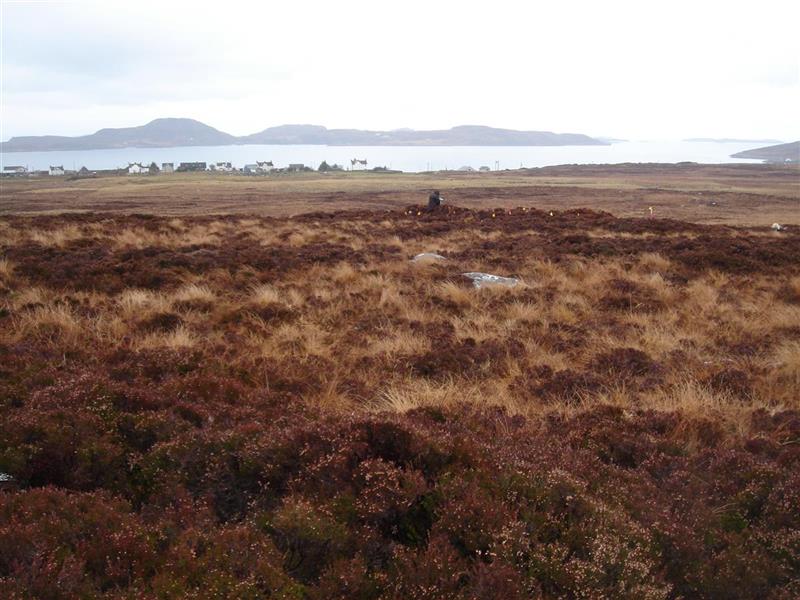 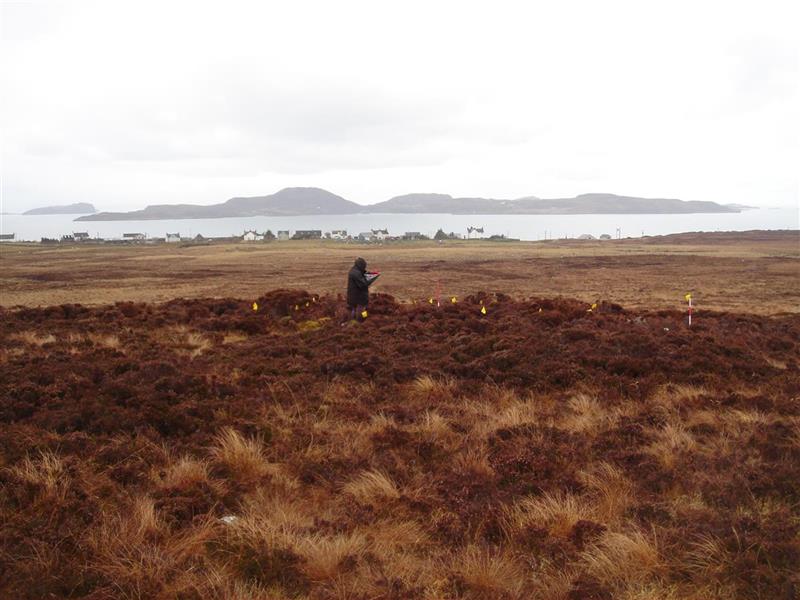 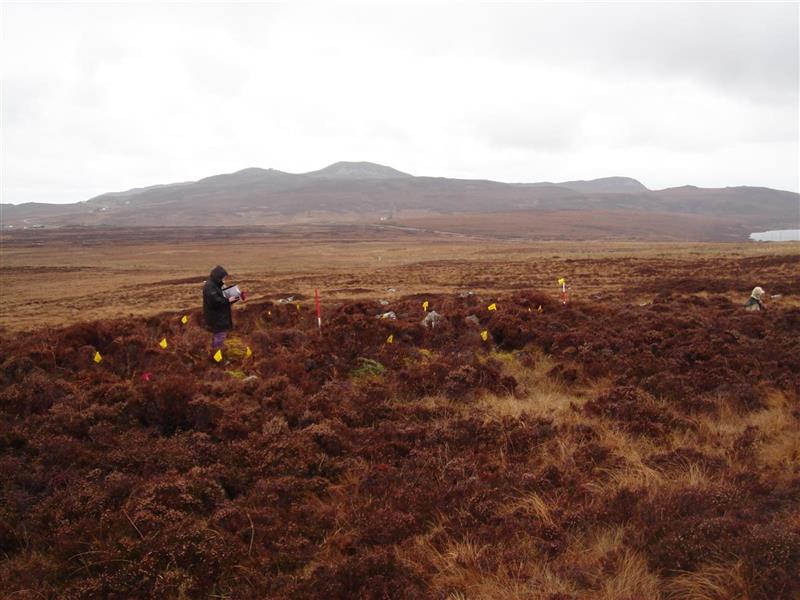 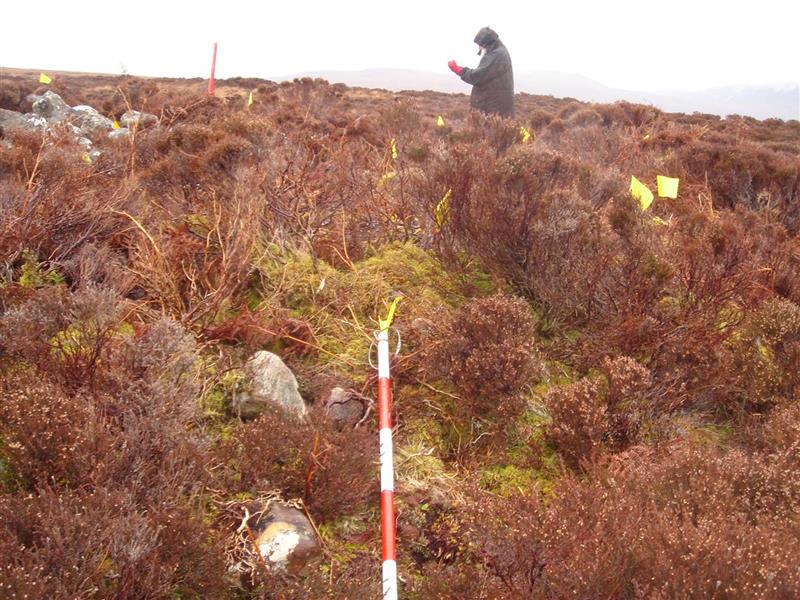 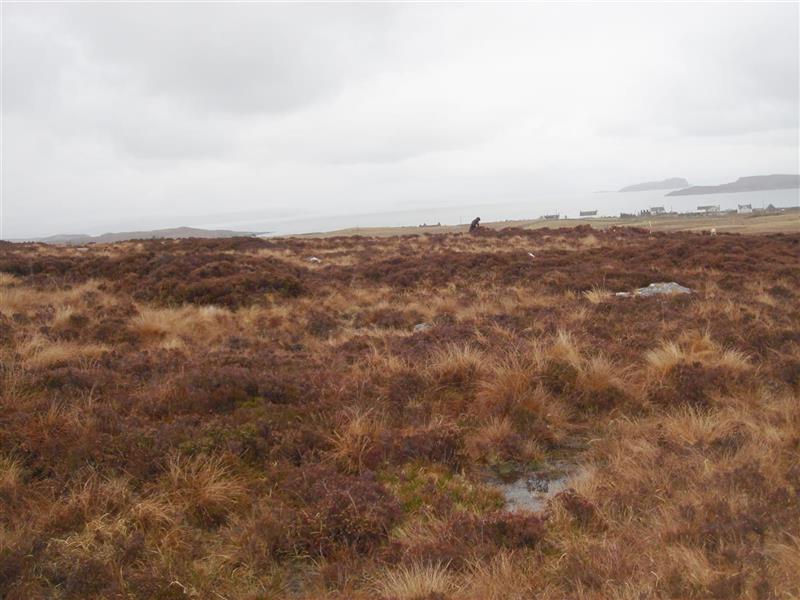 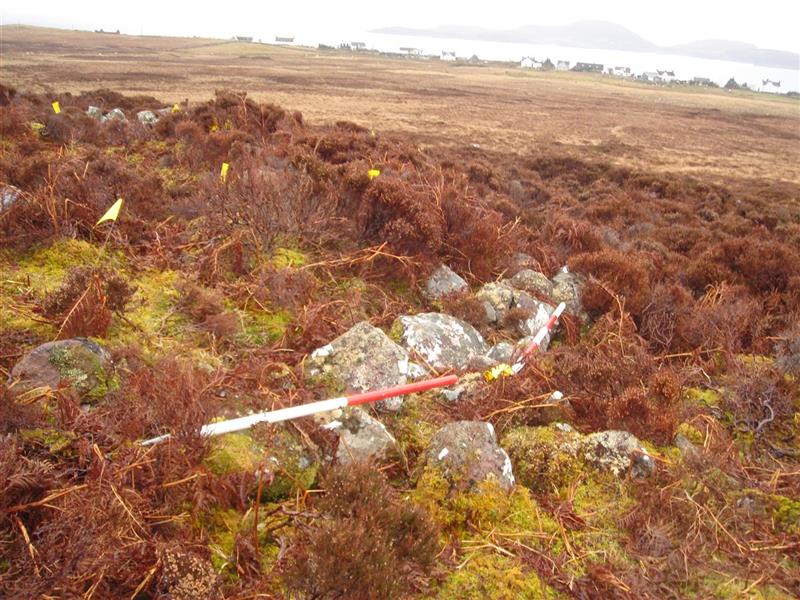 A hut Circle at Na-Tobhehtagan Breac, near Achiltibuie.

The settlement is situated on a slight W-facing slope in an area of moorland with a heavy surface scatter of rocks and boulders. It consists of a well-preserved hut circle in the centre of an area of fields and enclosures, bounded by low banks of stone. The surface stones have been cleared from the enclosures and piled into heaps; the areas to the S and W have also been cleared. The hut circle has an internal diameter of 6.0m. The walls are 2.0m thick and consist of inner and outer faces of stones set on edge with the space between filled with smaller stones. Further W are the remains of what may have been a smaller hut circle, but it has been obscured by a field clearance heap.
Visited by OS (G H P) 27 May 1962.

A circular stone-walled hut at NC 0265 0930, measuring 9.8m in diameter overall. The outer face is well-defined round the N half and the suggestions of an inner face indicate a wall thickness of c. 2.0m. The N half of the interior is filled with clearance stones. The entrance in the ESE is indicated by a featureless gap 1.6m wide. The hut occurs on a rough stony slope which has been partially cleared and a complex of field walls built around and in the vicinity of it. There are also a number of early stone clearance heaps, rickles of stones and stones cleared onto small natural escarpments, none of which can be called lynchets. It seems likely that the hut is contemporary with the clearance heaps, but its association with the walls is uncertain. The presence of the stone clearance inside the hut obviously indicates a later occupation of the site and the walls could be secondary although there is no positive evidence of this. The alleged hut seen by OS field surveyor (G H P) to the W is purely a field clearance heap, but a platform edge with stones to the SSW ('A' on the enlargement), 13.5m in diameter, could be another overgrown hut stance. Visited by OS (J M) 16 July 1974.

Situated on gently-sloping, rocky moorland, there is a hut and a small enclosure, both possibly hut-circles, accompanied by several larger enclosures and the remains of a field-system (previously described as NC00NW 2). The hut (ACHIL94 351), which is incorporated into the NW end of one of the enclosures, is oval and measures 8.5m by 6m within a stony bank 0.2m high and now spread to a thickness of 1.5m. The small enclosure (ACHIL94 350) lies within one of the larger enclosures; it is oval and measures 8.8m by 7.3m within a stony bank 1.5m thick. The condition of these two structures makes precise classification difficult, but they may either be parts of a prehistoric settlement or structures of much later date. Surrounding the buildings there are the remains of several stony banks which, on the upper part of the site where they are best preserved, form pens and enclosures; lower down the slope they become parts of a field-system which includes a number of small cairns and clearance rickles. (ACHIL94 350-1) Visited by RCAHMS (JBS) 9 August 1994

202655 909291 Achiltibuie Stores 3 CMM012: The hut circle was visited by A Welti and C MacNeilage in 2010 as part of research for a dissertation on hut circles in Wester Ross. This was part of a degree course overseen by Aberdeen University. The circular stone structure lies on a platform dug into and built out from a very gentle west facing slope, inside an enclosure bounded by heather covered banks. There is a lot of tumble in and around the structure but It is in fairly good condition. Other enclosure banks and clearance cairns are visible in the vicinity of the structure indicating associated structures and field systems. It is 50m from a stream, and 600 m from both the sea to the west and 1000m from Loch Vatachan to the northwest. The outer and inner edges of the HC walls are defined by facing stones in several places. Average internal diameter is 5.4m, external diameter is 10.3m. The double skinned walling consists of large boulders. The wall is 2m thick with maximum height 0.5m. The entrance, width 2.0m externally and 1.0m internally, is clearly defined with a fallen orthostat to each side and faces southeast. Entrance passage length is 2.5m, indicating extended terminals. This HC appears linked with CMM010 (see MHG57334) as well as CMM011 (see MHG57335), both at a distance of 500m, all being on 50m contour. It may also be associated with CMM001 (see MHG26113) and the grouping behind Achiltibuie Post Office. <1> <2>