The presence of quantities of vitrified rock on the island, and within the fabric of the medieval castle, suggests that it was formerly the site of a vitrified fort, possibly Iron Age in date. 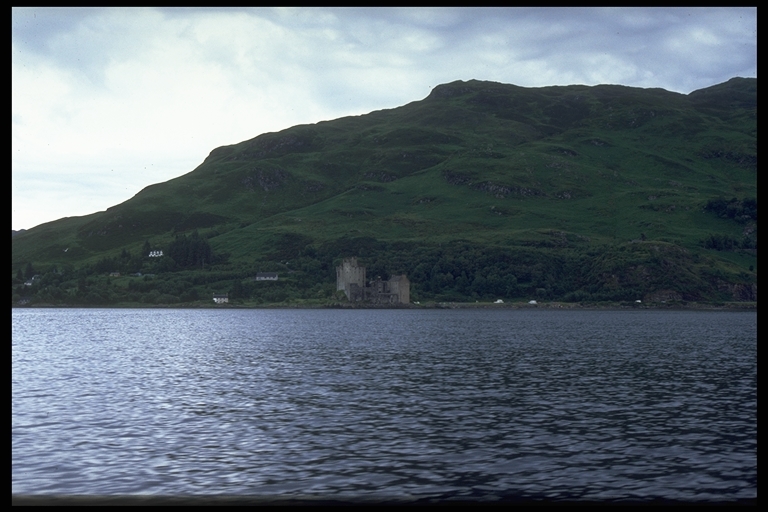 This castle is said to have originated as a vitrified fort, the remains of which were visible on the landward side of the island in 1912, in the form of a wall of considerable dimensions (T Wallace 1921) and part of the later castle wall is built over the remains of a shell-heap.
This fort was replaced in the 13th c by a castle consisting of a great wall of enceinte, the outline of which can still be traced. A narrow passage between two walls seems to have formed the entrance from the loch on the west. It was probably originally a steep staircase, but is now only a slope of stones. A keep was erected on the NE angle of the enclosure probably in the 14th c, its N and E walls superimposed on the older wall. The foundation of the tower, 57' x 43', with walls 10' thick, exist all round and fragments of the N and S walls still stand to a considerable height.
An unusual feature is a heptagonal water tower lying to the east of the castle, but connected to it by walls, about 5' thick and probably originally about 15' high, which enclose a long sloping court.
In 1719 a body of Spanish troops were beseiged in the castle which was battered and ruined by three English men-of-war. It has been restored by Lt-Col MacRae-Gilstrap during the years 1912-1932. (D MacDonald, A Polson and J Brown 1931)
D MacGibbon and T Ross 1889; T Wallace 1921; D MacDonald, A Polson, J Brown 1931. <1>-<3>

Castle Donnan, a 13th century keep, formerly ruined and now restored, as described above, built possibly on the site of a vitrified fort. All that remains is some heaped close by the water cistern.
Visited by OS (N K B) 29 September 1966.

Castle Donnan is generally as described. A straight length of collapsed walling some 55.0m long lies close to the shoreline on the NW side of the bridge. This is what Wallace refers to as "a wall of considerable dimensions", and loose pieces of vitrification occur amongst the debris. Despite this, however, it may be relatively modern but there is little doubt that a vitrified structure formerly occupied the island.
Visited by OS (A A) 19 June 1974.

A geophysical survey (magnetometry) in March 2008 aimed to ascertain whether or not this was the site of a vitrified fort. Had there been vitrified ramparts in or around the survey areas, even truncated by later activity, then a strong and characteristic magnetic signal would have been detected. The survey did not detect any such evidence. The survey report therefore concludes that the island was not the site of a vitrified fort and that the fragments of vitrified stone present at the site must have been imported, possibly during the early part of the 20th century. <4>

Subsequent evaluation by trial trenching later in 2008 found fragments of vitrified rock in all trenches, and within the fabric of the medieval castle. Given the scale of medieval fortifications encountered, the lack of in situ remains of any fort is not surprising. The findings suggest that vitrified rock was widely available across the island, supporting the theory that the castle was established on the site of an earlier vitrified fort. A crucible fragment, possibly dating from the pre-medieval period, was found during the excavations. <5>

This site was included in the Atlas of Hillforts of Britain and Ireland online database. See link below for site entry. <6>